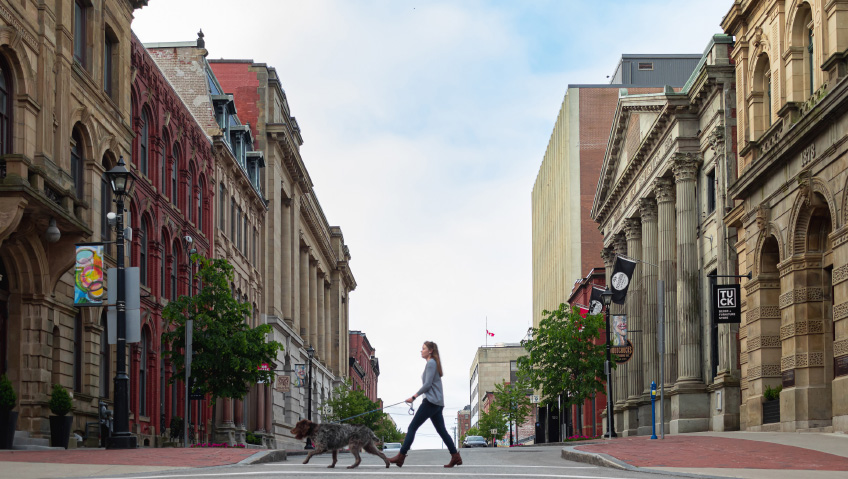 In January 2021, the beginning of Year Two of the pandemic, most municipalities were working on survival plans. But not the Saint John Region in New Brunswick on Canada’s east coast. Their municipal leaders set loftier goals: rather than survive, they would thrive.

The key to thriving, they believed, was Envision Saint John: The Regional Growth Agency. It was to be a sales, marketing and support engine for the entire region, and it launched on January 1 that year.

Envision Saint John combined the strengths of six communities: the commercial and industrial hub of Canada’s oldest incorporated city, Saint John, incorporated 1785; St. Martins, on the Bay of Fundy; and Grand Bay-Westfield, Hampton, Rothesay, and Quispamsis, on the Saint John and Kennebecasis Rivers, with a combined population of just over 130,000.

The first of its kind in Canada, Envision Saint John represents a new model for a growth agency, one that aligns and combines the differing activities of attracting visitors, new residents, investment, and business under a single umbrella. The agency has one board, one leader, one budget, and one mandate: to foster growth in the region.

“They were all doing good work, but the reality was they were separated, working in their own silos,” she says. Seeing beyond the status quo, the new city manager, John Collin, fully grasped the benefits of integrating the three agencies, creating an efficient infrastructure that would only be strengthened by including surrounding communities, while accepting their differing economic, cultural, and social priorities.

Hicks had spent 27 years in the hotel industry in Saint John and had worked in tourism with Discover Saint John. “In the hospitality industry we work with a number of partners, trying to sell the region,” she said. “At the end of the day, a hotel is a hotel, so it’s more about why you should come to this region. Collaboration and collective impact had always been a big part of my strategy.”

And now, after earning the post of CEO of Envision Saint John, following a national search for the right candidate, Hicks has put her passion for the region she calls home, and her talent for collaboration, to work on a much larger scale.

First on the agenda were meetings with the mayors and councils of the surrounding communities, when Hicks spent time listening to what they hoped for if they bought into this new model. They unanimously agreed that they wanted the region to be a place where their children and grandchildren could expect a worthwhile career and life.

This is something that Hicks says will be achieved through the growth the agency envisions and the ambitious goals it has set for the next 10 years: to increase the region’s population by 25 percent; to increase the municipal tax base by 30 to 35 percent; and to improve regional brand perception.

Early in 2021, each municipality, with council support, signed a five-year funding agreement to invest in the new agency and its strategic growth agenda. Resulting from this regional collaboration, the Province of New Brunswick, under Premier Blaine Higgs, committed significant funding—$1 million annually for 10 years.

An important piece of the growth agenda, says Hicks, is the development of the “talent pipeline where we will work with post-secondary education and labour as our key partners and invest in education leading to the ‘careers of tomorrow.’”

Another key element involves telling Saint John’s story to the wider world. During the spring of 2021 there were still international travel restrictions as well as, on occasion, interprovincial ones, so Envision Saint John focused on attracting “staycationers” from other areas of the province.

One innovative tool was an engaging and witty three-minute video that eschewed the predictable lighthouse and lobster scenes many east coast promos favour.

Jillian MacKinnon, Vice President of Marketing Communications & Strategic Initiatives working with strategic marketing partner, Hawk Marketing, instead tapped into the musical talents of Grand Bay-Westfield musicians John and Lisa McLaggan, aka Tomato / Tomato, an upbeat quirky, bluegrass duo who showcase the region to the tune of the children’s song “Down by the Bay” with appropriately rewritten lyrics. Viewers start at the Imperial Theatre in uptown Saint John, explore the Sea Caves at St. Martins on the Bay of Fundy, cross the suspension bridge on the Fundy Trail Parkway, paddle on the Kennebecasis River, take one of the six free cable ferries across the Saint John River and visit the picture-perfect towns of Hampton, Quispamsis, Grand Bay-Westfield, and Rothesay.

MacKinnon, who grew up in the region and returned upon university graduation, says “I came back because I love this place and I’m happy I can work every day to promote and sell it. I am passionate about it and this job is a dream for me.”

Just nineteen months in and with the pandemic not yet over, the agency’s bold plan to attract visitors is paying off.

The Canadian Hockey League Memorial Cup championship was hosted by the region this past June has put it front and centre on the national stage and generated a welcome $10 to $12 million windfall for hotels, restaurants and local businesses. “It was the first major win for us,” says MacKinnon, suggesting this is just the beginning.

The four-team round-robin-format ice hockey tournament held at TD Station saw the Saint John Sea Dogs finish with a 6 – 3 win over the Edmonton Oil Kings, having defeated the Shawinigan Cataractes and the Hamilton Bulldogs, taking the Memorial Cup for the second time in the team’s history.

At the same time were concerts and a variety of other events, many centered around the just-opened Area 506 Waterfront Container Village. This venue next to the Marco Polo Cruise Terminal, with a total of 54 modified shipping containers with 27 different vendors, a concert stage and a beer garden, will greet thousands of cruise ship passengers, leisure visitors and locals annually. The container village is just part of a total reimagining happening on the Saint John waterfront including new commercial and residential developments, performance spaces and improved access to the water.

“The Memorial Cup was a fabulous event and I have never seen energy like this in the region,” Hicks says, reflecting on how the event had come together because all six communities were on board.

“We had a short window to get in play, but our group came together with the Saint John Sea Dogs, when we asked ourselves, ‘How do we win this bid?’ We were up against Quebec City, which is a Goliath and has a lot to offer because it is a great destination, but we were determined. Why not Saint John?” she recalls.

“It was the first time all six mayors had worked together to go after a bid. We talked about it at a meeting on Friday and by Sunday night all six signatures were on the letter, which we took to the Premier. We explained why we needed this event in this province and he unlocked funds ($1.1 million) which brought other players to the table. The federal government contributed a further million,” shares Hicks.

“That was the first time we all saw how powerful our voice can be when we work together.”

Plenty to offer—less to pay

In the family-friendly small towns surrounding Saint John, and within its limits, home buyers can purchase dream homes along the Saint John or Kennebecasis Rivers, or on the Bay of Fundy, in the price range of $300,000 to $350,000.

At these prices, these properties are comparable to many costing $1 million or more in Toronto or other urban centres. Moreover, their owners can enjoy them in a peaceful, small-town atmosphere without sacrificing career opportunities and urban amenities.

These towns are only a 15-to-30-minute commute from the urban centre, which is home to the global headquarters of billion-dollar companies including Irving Oil, J D Irving, Cooke Aquaculture, and Moosehead Breweries; a vibrant tech community; state-of-the-art medical facilities at Tucker Park; and a port facility that is positioned to take its place as one of Canada’s leading ports.

Then, in 2021, came news about a Health & Technology District Saint John, which Hicks calls a “game changer.”

The Lark Group, working with the University of New Brunswick and Opportunities NB, has announced plans to invest $30 million to construct a building of 75,000 square feet, housing a ‘Health & Technology District’, which will begin construction in 2023. It will be similar to one the Lark Group completed in Surrey, BC, because as Hicks says, “this private company believes we have the right combination of conditions here to make it happen.”

The purpose of the Health & Technology District is to bring together innovators, entrepreneurs, students, and faculty to work alongside scientists, clinicians, and health care practitioners to develop new technologies and improve health care outcomes, patient experiences, and the economics of healthcare delivery.

“It will take Tucker Park to the next level,” says Hicks. “Any city across Canada would love this opportunity. We’ve been selected because we have a natural cluster of partners collaborating, and we also have an infrastructure that really suits this next investment as an innovative district for our region. By working together, we can transform the health care system and build a leading hub for technology in Atlantic Canada, and we’re leaning into that.”

In 2015, Port Saint John, operated by DP World out of Dubai, launched a $205-million modernization project to be completed in 2023, that, according to Hicks, will position Port Saint John as one of the only ports on the eastern seaboard with capacity for growth. It is currently Canada’s third largest by tonnage.

The Port sits on 70 acres, and offers diversified handling capabilities, including containers, bulk, and breakbulk. It maintains weekly container connections with MSC, CGM, and Haag-Lloyd, and connects Port Saint John with over 500 ports globally. DP World recently announced the addition of two much larger cranes with extended reach, enabling larger cargo ships in the port.

“Thirty years ago, there were decisions made that led to the port’s decline, but now we’re seeing transformational growth and we’re very proud,” Hicks says. “We’ve seen an increase in cruise ships docking in our port, but since DP World came in, we’ve seen massive growth on the cargo side. Thirty years ago, CP Rail left, but now it’s back alongside CN and the Irving-owned New Brunswick Southern Railway.”

Hicks believes that the increased capacity of the port together with dependable rail connections across Canada and the U.S. all the way to the Gulf of Mexico will help solve critical global supply chain issues for both importers and exporters.

“The growth that’s happening is substantial. We’re looking at filling between 500 and 800 jobs in the next five years,” says Hicks. “Our port is going to be the next great port in Canada.” 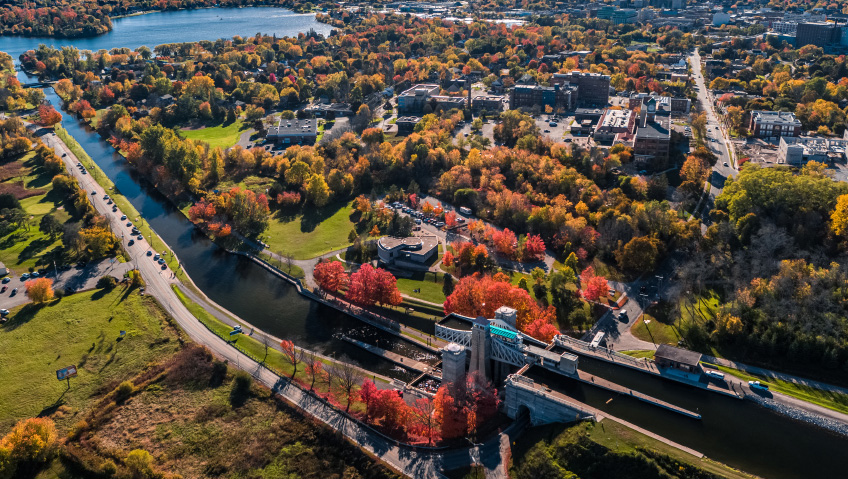 Building the Future With Innovation and Sustainability