We’re In This Together 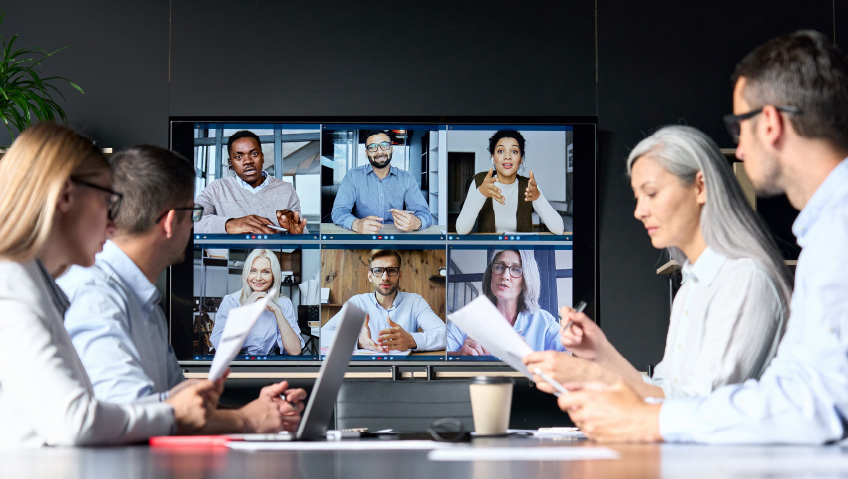 Every generation has a turning point – a historical marker people reference when comparing what life was like before and after.

Whether the event was cataclysmic, such as a World War, or overarching, such as the 60s ushering in decades of social change or the beginning of the Information Age in the late 80s, the lifestyle changes that resulted, while profound, were incremental, often only fully recognized in hindsight.

Nothing in recorded history compares with the speed of social change brought about by the COVID-19 pandemic, something you could not fail to notice. In the ‘before times’, people enjoyed visits with family, socialized with friends, travelled, attended classes, volunteered. They went to the theatre, the gym, sporting events, places of worship, restaurants.

But mostly? They went to work. Five days a week. Depending on the nature of their work, they met the public, met each other, worked in teams, had chats and coffee, and meetings and coffee.

But all that ended abruptly in March of 2020, with global lockdowns, travel restrictions, and an overnight transition to a new work model – remote work. Two years later, even though restrictions are lifting and businesses opening, not all are returning to on-site work.

It appears that both employers and employees see benefits in remote work. Employers believe employees are more productive without the distractions of an office setting, and moreover, management can reduce expenses by running a smaller facility. Employees appreciate not having to commute, working in a relaxed setting, and being able to respond to a child-care emergency.

Both agree, however, that collegiality, a key ingredient of workplace satisfaction, is missing, and that the loss can lead to poorer performance for businesses in the long term, when team spirit, the relationships that enhance people’s ability to work together, is lost.

Business in Focus spoke with representatives of two Canadian-based companies, both of which had been offering in-person team-building events and business communications workshops before the pandemic. Not missing a beat, they tweaked their programs to accommodate online delivery platforms, and in the process, extended their reach globally.

Brad Whitehorn is the Sales and Marketing Coordinator for Career Life Skills Resources Inc. (CLSR), a company based in Aurora, ON which for over 40 years has provided assessments and resources in the fields of career development, self-understanding, and personal growth.

On its list of satisfied clients are businesses and organizations of all sizes; federal and provincial governments; school boards, colleges, and universities: workplaces where the materials are used by psychologists, career and employment specialists, human resource consultants, and organizational consultants.

Among CLSR’s broad range of product offerings, is the Personality Dimensions™ (PD) program, which creates a framework for understanding temperament patterns by putting complex personality theory into everyday language.

“The crux of it is communication and the ability to understand yourself and others better,” Whitehorn explains. “In the context of human resources in the corporate world it is about understanding your motivation, talents, and preferred way of doing things; understanding how people are different, and then making that connection of what you can do, and what others can do, to improve processes.”

It’s been a successful program since 2003, he says, with qualified professionals from HR departments or counselling offices receiving intensive in-person training, over three days, to become certified PD facilitators and trainers. They could then return to their workplaces and deliver the three-hour program in-person to small groups. But in March 2020, in-person training stopped.

“The idea of creating an online program had been there for some time and some facilitators were experimenting with it off and on, over the years, but it wasn’t until the pandemic came that we started thinking seriously about how we could put everything online as a way to support employees working remotely,” says Whitehorn.

“We wanted to maintain the interaction that made learning enjoyable and use the same activities and workshop ideas. We looked at what transfers easily into a Zoom-type setting, what needs modification, and what doesn’t work.

“What we found was that most of it worked as it was, and just needed tweaks to work with the technology. Breakout rooms are one of the great features created for Zoom platforms, so that means people can continue to meet and work in small groups. In the end, we’re finding that the online workshops are pretty much the same as the ones we were doing in person.”

Whitehorn says that CLSR has received positive feedback from both employers and employees who have been working remotely. “Being taken out of the office you’re accustomed to and thrown suddenly into working at home with no support from colleagues is traumatic.

“We didn’t know how long we would be doing this, and we still don’t know, but an important element of Personality Development ™ is about empowering people and improving their lives, which can extend to personal and family relationships as well, which impacts their work.”

Chris Hill is the founder and director of Fun at Slixer, a company based in Vancouver, BC, with franchises in major centres across Canada and the U.S., including Calgary, Toronto, Halifax, Boston, Seattle, Chicago, Los Angeles, and Portland. And since the pandemic began, virtually everywhere.

Among the events were murder mysteries with professional actors, and other events such as escape rooms and treasure hunts, all of which were designed to build teamwork, trust, communication, and collaboration.

For the first 20 years, all events were offered in-person, but just as in-person work everywhere ground to a halt, so did Slixer’s.

“We all suffered the same thing in March,” Hill recalls. “All of our events were cancelled and inquiries about future ones stopped coming in. We said, we have to pivot.”

Previously, Slixer had been using software developed by Wildgoose UK, an award-winning team-activity company, for those in-person events that required corporate employees to solve puzzles or follow scavenger hunt clues on smartphones, but the lock-down hastened the introduction of completely virtual programming.

“We had a lot of virtual meetings – every day, in fact – discussing how we could present our programs virtually. The timing was quite fortunate because it was at the same time that Zoom was making inroads and developing break-out rooms. We immediately saw the advantages of matching our technology with it and bringing in our live actors to interact with the participants.”

In less than three months, Slixer events were up and running, not only in North America but around the world, first with virtual quizzes and scavenger hunts in April and May and then on July 1 with Manor House Murder, the first in a series of murder mysteries that includes Murder on the Train and Murder on the Slopes.

“Employers see value,” says Hill. “The 90-minute programs get everyone together. Businesses had all started doing Zoom meetings, but what we do is add fun. We are gamifying it and bringing together people who otherwise might not team up. For example, a company can choose to break up the HR department, and the accounting department and mix them up and it brings a level of camaraderie you wouldn’t get otherwise,” he says.

“When people are working remotely, they feel they have been left out of the corporate culture, but when employers provide this program, workers feel valued and appreciated, so it’s a real benefit.”

Many of Slixer’s clients are large multinationals, including Perkins Coie, an international law firm headquartered in Seattle, with offices across the U.S., China, and Taiwan; and other household names such as Spotify, Microsoft, Telus, Morgan Stanley, and Etsy.

March 13, 2020, the day Ontario went into lockdown, was an especially discouraging day for performers who are part of the gig economy, says Tara Baxendale, an actor and singer who lives in Toronto.

“For the six of us involved in the first online performance [of Manor House Murder] on July 1, 2020, it was the first time we had been able to perform with others in three and a half months. It was the first light at the end of the tunnel after we’d been locked down in our homes. We are all incredibly grateful to Chris because it meant we had an opportunity to perform when almost no one else in North America was getting to perform at all,” she says.

Previously, when on stage, she had worked mainly with other Toronto actors, she says, “but now I regularly work with improv actors who I have never met in person from across Canada – from Vancouver, Calgary, Winnipeg, and Montreal – and have begun work at 6 a.m. because of the time zone in Sweden where Spotify keeps offices, for example. So, despite the pandemic dividing everyone, it has brought people together, and even transported us around the world.”

We’re In This Together