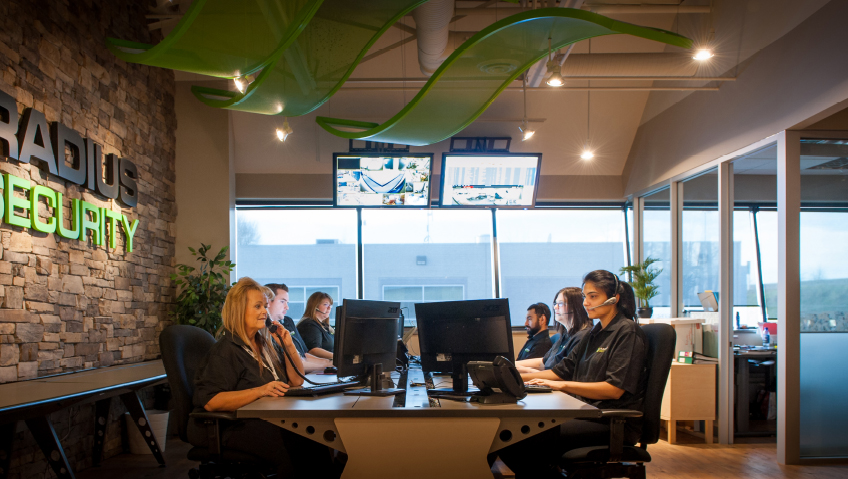 At times, it may seem that crime does pay. But with a proven high rate of arrests, Radius Security’s top-notch systems make crime far less lucrative by making it far less attractive – so its clients can sleep better at night.

There’s one extraordinary fact about this security company that we feel justified in bringing up first: Radius Security prides itself on preventing false alarms, with a proven 1.3 percent false alarm rate that is reputable within law enforcement agencies across Canada, and in the state of Texas.

Headquartered in Richmond, British Columbia, the company also has offices in Alberta, Toronto, Ontario, as well as in Southlake, Texas. But wherever it is, Radius Security boasts first-in-class technology for apprehending trespassers and preventing loss and damage, night and day, on dealerships and construction sites.

And the Radius Security team doesn’t expect prospective clients to take their word for it, either. It is quite the norm for a potential client to be plied with comprehensive stats when partnering with Radius to install the Redhanded solution on their sites – the result of the company’s careful tracking of the numbers of its successful police apprehensions, of a low false alarm rate, and of sites under its care.

“We use pretty edgy marketing to try to get that point across,” shares Stephanie Dawe, Marketing Manager. “But at the same time, we’re still trying to be very diligent in our messaging because crime is a complex issue, and perpetrators are usually between a rock and a hard place when they’re committing a crime.”

Next-level support and security
Radius Security’s big motivation is to help authorities efficiently apprehend criminals. But the company’s next-generation technology doesn’t just prevent theft on its clients’ sites; it also records activities like vandalism or accidents that occur during un-armed hours, for instance, when other service providers’ delivery or collection vehicles cause damage to its clients’ vehicles and property. “We partner with companies and help them to eliminate crime so that they are empowered to focus on what they do best,” says Richard Hambrick, USA Regional Sales Manager.

As the Radius Security team knows very well, security systems are a grudge purchase rather than something that clients enjoy buying. But, as Hambrick notes, once the damage is done, everyone wants the best system to protect them from recurring incidents.

“We’re the security company that everyone wants when they have had a break-in. You want to protect your business and your assets and luck is not a good business strategy,” he says.

As a result, the company is typically called on by crime victims who have been let down by traditional security systems and have suffered varying levels of loss as a result. It is usually around this point that clients start taking control by preventing loss rather than dealing with the aftermath.

Getting it right
It is common knowledge that video footage is sometimes evidential quality and other times not. For this reason, while its camera offering is second to none, the Radius Security team works with responding officers to ensure a greased-lightning police response that effectively catches attempted crimes in progress.

“We have the statistics to show over 990 successful apprehensions in the last 12 months. We have a false alarm rate that is under 1.5 percent,” Hambrick says.

The reason this percentage is significant, according to Hambrick, is that, consistently, in most major metro markets across North America, the false alarm rate is over 98 percent. This is concerning considering the enormous waste of resources given over to unnecessary police responses.

It comes as no surprise then that with the authorities pleasantly pleased to know that they can trust Radius Security alarm signals, they adjust their own responses. “The police’s response time on average is four to eight minutes from the time we call the police to the time that they arrive on-site,” says Hambrick.

Hambrick emphasizes that “it is not a single piece of equipment that can accomplish that.” The fact is that many elements of proprietary technology are harnessed to create an unbeatable security solution. “If there was a single piece of equipment, every company out there would have [the same statistics as us.] We’re the only company that can give you our statistical facts documented.”

Redhanded™
The company’s most successful product, Redhanded™, combines a potent set of technologies to achieve its great remote-guarding success – including Human Detection Technology™ and CCTV technology. Radius Security has found ways of combining existing technology with its own proprietary solutions to create a product that speaks, seamlessly, to both law enforcement and clients’ needs alike.

“[The camera footage] is time and date stamped when a recording is made. It is admissible in court,” says Hambrick. The footage is easily accessible and the company provides it to the police and its clients as quickly as possible after an incident.

The product’s daytime capabilities are just as sharp as its nighttime prowess. And, as Hambrick points out, that’s how many of its clients are quickly persuaded that the system really pays for itself – especially with regard to construction site safety. In this way, the Redhanded solution can potentially lead to considerable cost savings, at the same time as clients benefit from a 24/7 monitored security service.

An anti-crime family
Radius Security clients become part of a team of dedicated experts. As many of the original founding family members still serve on the leadership team, you can expect a level of support that is above and beyond typical corporations.

Rob Baxter was the original creator of “Rosie”, the company’s well-known green camera box system. He is also at the forefront of research into minimizing false alarms as well as building relationships with law enforcement.

“Then there is Joslyn Alderson. I’m very fortunate to report to a leader like her,” says Dawe, praising the leadership team for their innovative minds and progressive entrepreneurial brilliance. “We’re a 70-year old company but we have a startup mentality where we are able to pivot and keep up with progressive changes in tech,” Dawe says.

Before moving into the President role, Mike Baxter spent several years leading the growth across Canada. As an expert in the Redhanded solution, his visionary and hands-on approach to leading the company has gained genuine respect from employees.

Leadership in the U.S.
Then there is Sam Alderson, whose job description, I am told, only scratches the surface of his actual function within Radius. Alderson heads up the company’s United States arm based in Texas, with a focus on sales.

Howard Sanders is another of the company’s U.S. leaders. As Operations Manager with over 30 years’ experience in amongst some of the country’s very best security companies, he is especially lauded by Hambrick for “ensuring that the client not only gets what we promised but that the client feels that they get more than what they asked for,” he says.

Radius Security’s research and development team would not be complete without its manager, Aleksei Bulavko, research, development and production manager.

The company’s command center supervisor, Sharon Hunt, is another of the company’s stalwart leaders known for treating clients like part of the family.

“Everything that happens in the Command Center, Sharon Hunt takes personal ownership for. One of the beauties of our company is that we have no third-party monitoring. We do not outsource our monitoring to different monitoring centers overseas like a lot of our competitors may do,” Dawe says. This not only allows better control over service delivery but builds a close rapport with both clients and police dispatchers over time.

A force for good
Joslyn Alderson’s vision to have a sustainable impact on the communities Radius serves led to the creation of the philanthropic team, Community Matters – composed solely from employee volunteers to direct the corporate giving initiatives. The Community Matters team supports organizations whose missions are to help youth facing barriers to create positive, lasting relationships and become leaders in their communities.

The initiative has started traditions like an impressive holiday campaign. “With our annual Spread the Cheer campaign we align with organizations that help to address some of the root causes of crime, hunger and homelessness,” she adds.

The company’s culture is based on 30 fundamental behaviours that the firm refers to as its DNA. These include always doing the right thing, holding one another accountable, and much more.

With this pragmatic list of behavioural principles firmly embedded in the company’s collective mind, strategic and responsible growth is its next important shared value. Basically because, when working with the futures of the next generation of family and staff in mind, stability beats quick profits every time.

“That’s where you see the thoughtfulness and the decision-making being so carefully crafted. And, as employees, we all get to benefit from leaders who are not just thinking that way but acting and behaving that way,” says Hambrick.

Moving into the future, Radius Security will continue to apply the gold-standard strategy that allowed it to weather the COVID-19 crisis brilliantly. This means adapting to market conditions without missing a beat and protecting clients and partners by honouring the integrity of the company.

No matter what the economic climate, however, crime never sleeps. And, as a result, alarm companies and other security providers are learning one fact fast. Don’t cry wolf with Radius Security around. Because this team does not trade in false alarms. 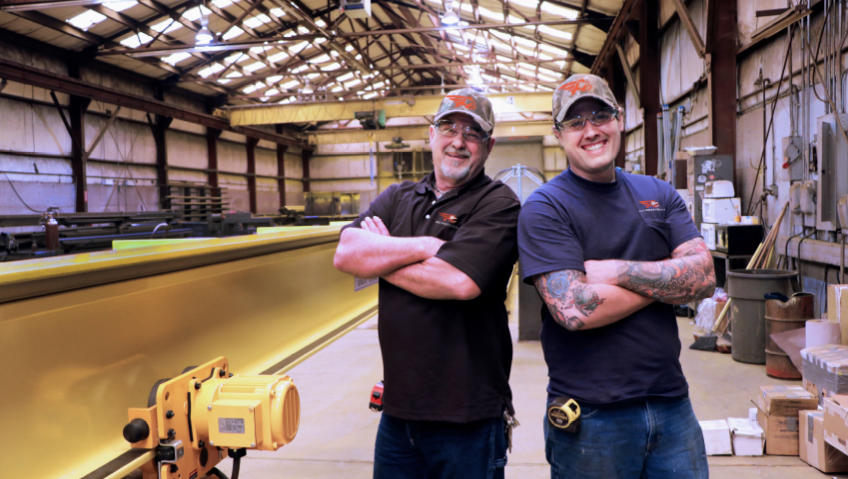 A Family Business Committed to its Legacy