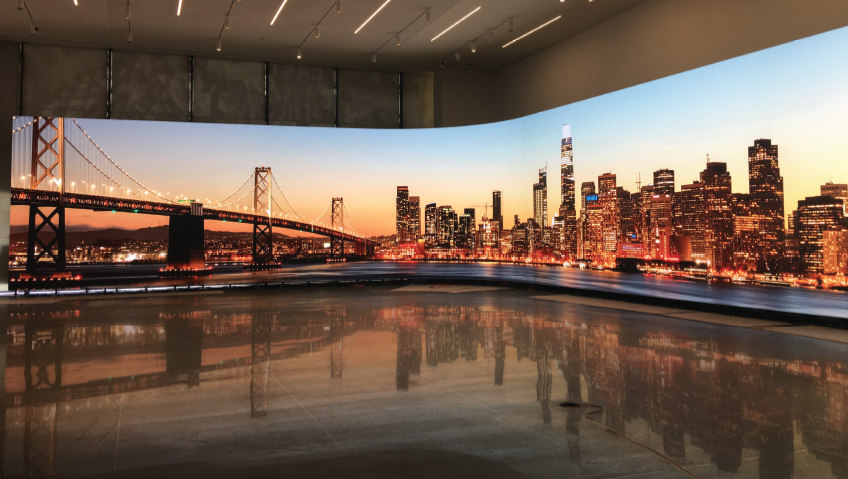 Today, one of the world leaders in bringing digital dreams to life is New York City-based SNA Displays. Through the innovative use of LED display technology, the digital canvases designed and manufactured by SNA Displays are nothing less than spectacular.

SNA Displays is a pioneer in creating larger than life, high-end digital displays.

Such impressive displays are relatively new. Originating in the United States in the 1830s, early billboards were not the sophisticated, high-tech free-standing displays we think of today, but large signs painted or glued onto brick walls, promoting everything from circuses to laundry soap.

As America grew, businesses counted on signage to promote products and services. Billboards became standardized across America and popular for then-fledgling products like Coca-Cola and Palmolive.

Becoming increasingly elaborate, billboards soon began appearing along the Interstate Highway System, where they were seen by thousands of drivers every day.

Unique projects
But nowadays, thanks to companies like SNA Displays, advertisers, galleries and businesses of all kinds are no longer limited to static billboards, and can get their message across on a grand scale, in unique ways.

Located at 1500 Broadway in the heart of world-famous Times Square, SNA Displays is surrounded by enormous digital signs advertising everything from shavers to smart phones, and soft drinks to sunglasses. Occupying the 20th floor of the Good Morning America-based skyscraper, the company’s headquarters boasts a high-tech demo wall, where clients experience the latest innovations up close.

“We run the gamut from really small to huge mega-spectaculars,” says SNA Displays’ Senior Director of Communications Mitch Leathers. “Our standard is, we will work from small to large, and standard to custom. We do all kinds of projects.” A turnkey provider of the latest jaw-dropping indoor and outdoor LED digital-video displays, SNA Displays is a magnet to clients for its ability to oversee, manage, fabricate, install, and maintain digital signage as seen on streets, inside and outside malls, in office reception areas, and other high-traffic locations.

Working across the United States, the company is expanding its global presence to the European market, recently retaining two salespeople in Sweden. “If it’s the right fit, location is not an issue since we have support and service partners all over the world.”

As one of the world’s biggest suppliers of LED technology, SNA Displays’ projects cover everything from spectaculars and mega-spectaculars to sports and entertainment, arts and museums, retail, corporate identity, lobbies and video walls, and out of home (OOH) works.

The company’s portfolio includes visionary, one-of-a-kind, custom-engineered digital works like “As We Are.” A massive LED art installation looking like a human head, the award-winning project – unveiled at the Greater Columbus Convention Center – “represents one of the most custom LED display projects in the industry,” according to the company.

Created with a tight pixel pitch of just five millimeters, SNA Displays custom-built small panels that could be assembled along the facial contours of the structure to create the digital head.

Eye-popping technology
For almost three decades, the company has been at the forefront of display industry innovation. Its current offering of indoor video display products includes the BRILLIANT™ display series, which consists of narrow pixel pitch products, and its BOLD™ display series, which includes display products with pixel pitches of 2.5 mm and higher. SNA Displays also offers ASPECT™ display products, its indoor line of all-in-one, plug-and-play LED displays with standard 16:9 aspect ratios. For outdoor, SNA Displays’ offers its EMPIRE™ display series, which includes one of the industry’s widest pitch offerings for exterior LED displays. Finally, the company’s line of LED strips, which can be installed vertically or horizontally and at various spacing to create dazzling transparent video, is called THRUMEDIA®. SNA Displays also provides a host of systems- and software-related products and services.

With a team of about 60 employees in North America and offices in New York, Los Angeles, Dallas, Knoxville, and Atlanta, SNA Displays works with hundreds of engineers “dedicated to developing a steady stream of new and improved products,” as the company says. Along with a million square feet of space dedicated to everything from manufacturing to client service, SNA Displays is equipped to transform client dreams into realities while offering ethical, cost-efficient services.

Previously working mostly along the eastern seaboard, the company’s entry into the Los Angeles market came in November 2016 with the commissioning of a 10-screen video display system at L.A. LIVE, a major downtown installation. “That was our first major project in the area, and the mega-spectaculars dominoed from there,” comments Executive Vice President Jason Helton of the work.

L.A. LIVE was followed in 2018 by a massive 18,000 square foot three-screen digital display at Circa. Circa is located at Figueroa and 12th Streets, near the Staples Center.

The LED displays are part of a comprehensive promotional platform planned and designed by the owner’s advisor Sensory Interactive. Sensory Interactive’s revenue management team guided Encore Capital Management through the process of selecting SNA Displays for the project and then represented Encore in the negotiation of a licensing agreement with SNA Displays for the program’s development.

The Orlando project was particularly elaborate, encompassing a suite of displays throughout their campus. “It ties in dozens of displays throughout the campus, including LED technology and LCD technology,” says Leathers of the Orlando project. “That includes a large format display for the wave pool and several greeting customers at various entrance points. It was a big rollout.”

For SNA Displays, the Orlando project presented some challenges. Since the kiosks were deployed outdoors, they had to be able to stand up to Florida’s warm weather and salt air, and required careful consideration and preparation.

Many companies will often build the structure and install the componentry; the fundamental problem with this approach is that if something fails, patrons have to be removed from either the immediate mall or sidewalk, cones put out, and the unit opened to determine the issue. “You typically have to add air conditioning,” says Helton.

Instead, SNA Displays took a different approach for both Margaritaville projects, centralizing all the control equipment into properly set up IT rooms and ensuring that cooling was in place.

Utilizing lossless fiber optic transmission technology, the company kept all equipment protected, but able to transmit in real time, so kiosks could still have touch or gesture technology built-in with viewers able to interact without latency or lag.

“That’s been highly successful for both properties – and even for future properties that we are in development with right now,” comments Helton.

In total, SNA Displays was responsible for 30 LED and LCD display assets in the hotel and retail areas, the water park and water park entrance, the hotel roundabout, the selfie shack, and in even more locations.

With unmatched feature sets, built-in reliability, and full redundancy, they can perform moments of exclusivity, meaning they can throw one video feed to every location at the same time. “The scale is limitless on both these properties,” says Helton of the projects, which are managed remotely without a control room at either site.

“That is also a huge testament to the technology and engineering we put behind it. We’ve leveraged modern-day tech to work remotely. Just as COVID shut down the workplace and the office, we’ve done the same with some of these technologies. There is no longer need for 30 people at mission control.”

Among SNA Displays’ many strengths is its Client Service Group (CSG), which provides many support services, from concept management strategy to loading and network operations center (NOC) monitoring. This service is run by the company’s North American systems team headed up by Vice President of Systems Pat Green.

“This is a full-service network operations center that proactively monitors both the displays and backend system around the clock,” says Green. “This includes testing performance and diagnosing issues before they even occur. By having teams in place performing monitoring, incidents can be addressed immediately, whether on a single screen, or on a massive display in the heart of Times Square.

Another of SNA Displays’ complex display system rollouts was for American Dream Meadowlands.

The biggest mega-mall in America, American Dream Meadowlands is a massive outdoor campus in New Jersey’s East Rutherford. Still a work in progress and slated for completion around the end of this year, SNA Displays will eventually install at least 39 displays. Part of the megamall is open, including the waterpark, snow ski, and surf area. Considered a rolling project, high-end collections are still being unveiled, and new digital assets will likely be added year after year.

Not to be outdone, another large-scale project is The Fashion District of Philadelphia. A 90,000 square foot development, the Market Street project in Philadelphia, PA is similar to Margaritaville, and more of a campus project, not a single LED spectacular.

“We have multiple assets installed throughout the FDP campus,” says Helton, “both with static signage and with digital signage for exterior, and then we also have the interior rotating mall display on that campus as well.” This project saw SNA Displays work with sign maker YESCO, Eastern Sign Tech, and Sensory Interactive as a digital consultant.

In November 2019, SNA Displays worked on another entertainment venue rollout of digital displays at Grandscape, a prominent North Dallas shopping center. “It’s a dynamic, exterior-mall shopping space, and you’re starting to see a lot more of that in Texas,” says Helton, a Texas resident based just north of Austin.

For Grandscape, SNA Displays created large custom digital assets, including a custom 5mm outdoor marquee that wraps around the property’s theater at 90 degrees and a two-sided, ellipsoid-shaped Stylon™, a custom-made LED display designed by the Barnycz Group that is surrounded by a reflecting pond. “It’s a unique design and installation, and we’re starting to have a large presence in the DFW area with all our different digital assets there. The Dallas Fort Worth area is really starting to be a big hub for digital for us.”

Bright & beautiful future
Despite COVID-19, work continues at SNA Displays as clients gear up for a post-pandemic world.

With smaller works taking anywhere from six weeks to six months and larger projects requiring 12 to 18 months from fabrication to engineering design, implementation, integration, and commissioning, SNA Displays recognizes that many more companies are incorporating interior digital displays. Some in fact are using these signs as employee recruiting and retention tools, since they are constantly battling with other tech companies to secure the best talent.

“We’re seeing a lot more of these lobbies and architecture integrating art and communication instead of just pure advertising devices,” says Leathers.

For clients of any size, SNA Displays represent a significant commitment, and investment, into technology. More than a company that just sells product, the team at SNA Displays forms enduring relationships with customers, and is always available over time for the requirements of service, support, and technology issues.

“We’re one of the few truly turnkey providers,” says Helton. “We can do any scope they ask us to, and because of that, who better to know the ins-and-outs of the technology, the hardware, the expertise, and what it takes for these displays that break traditional boundaries? That’s what separates us.

“A lot of companies can make a screen, sell it, and walk away. But we’re in for the long haul with our clients: we make 10-year partnerships; we don’t make two-year sales.” 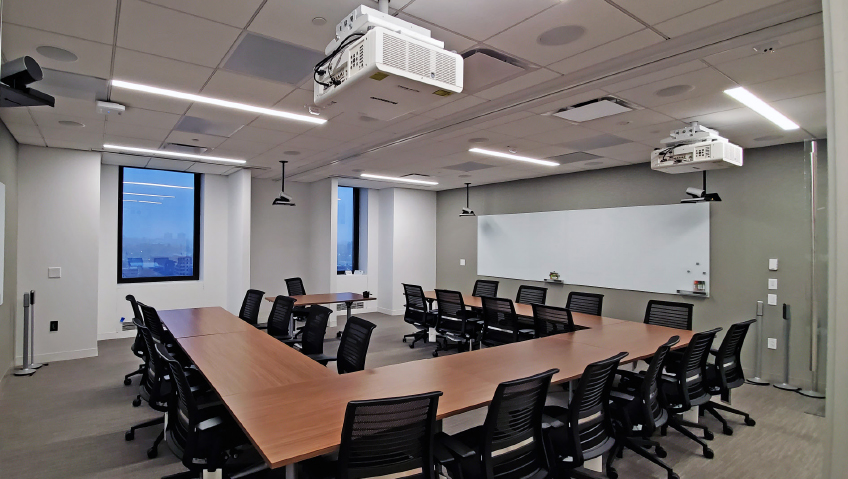