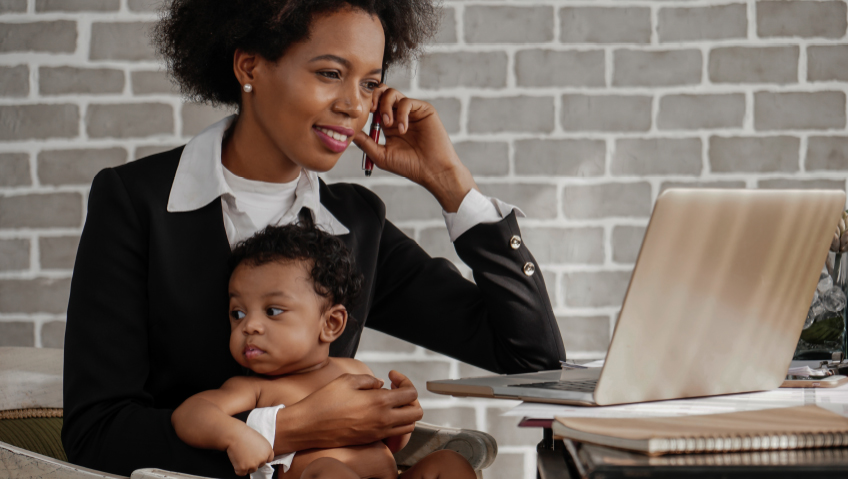 Those who say you can’t do it all clearly haven’t met a woman running her own business while also raising a family. Attempting to balance work life with personal life when you’re a mother and a business owner is probably one of the most challenging jobs out there. Adding the realities of financial inequality between women entrepreneurs and their male counterparts to the difficulties of sharing childcare and house duties with a partner means these women battle with much more than just the daily strains of keeping a business afloat. And yet, they’re still taking it on and getting it done admirably.

Money, predictably, is always one of the ongoing disputes: Women entrepreneurs simply don’t make as much as their male counterparts — a whopping 58 percent less, according to a report made by PayPal Canada and Bazzara & Associates. While this may be considered a reasonable deterrent to those women looking to dip their toes in the entrepreneurial pool, it’s not holding them back: In fact, almost 85 percent of women surveyed have shown an interest in launching their own business, according to the same report.

Aside from the ongoing wage gap issues, women have other struggles to deal with, including the fact that they often remain the primary caregivers for children and aging parents, while also shouldering a disproportionate amount of the housework in a shared household according to Forbes. Working mothers also spend more time on their own jobs, household duties, and child-rearing responsibilities than fathers, while not having equal access to paid sick days, paid family and medical leaves, and affordable childcare.

According to Forbes, 54 percent of women took leave from work when first becoming a parent as opposed to 42 percent of men. Plus, women take ten times as much temporary leave from work as men after having a child, and without a national paid leave policy, this generally means women in the U.S. are making less or no money at all during time off, potentially leading to crushing financial problems from income loss which in turn can lead to issues with retirement savings.

Women are also eight times more likely than men to look after sick children and also manage children’s school and sport schedules, which also detracts from their own work obligations.

Carol Luttrell knows a lot about the ins and outs of running a business while raising children, and appreciates both the positives and negatives accompanying it. Owner of a Barrie-based commercial/residential painting company serving numerous areas in Ontario for the past 18 years, she now has four grown children and a thriving business. Although difficult at times, she can’t imagine having done it differently.

“My children grew up along with the business,” she says. “Running my own business is all that I’ve done their entire childhoods. It was challenging at times juggling family life and the company, but also extremely rewarding.”

Having flexibility to travel and spend time as a family is high on Luttrell’s list of entrepreneur perks, but she says managing three children born within six years while ensuring jobs were completed on time for the business was stressful.

“When you’re a business owner you learn to adapt, and so do your children,” she adds. “Plans change a lot and you go with the flow. In the early days there was so much I had to learn, not only blueprint reading and quoting projects, but meetings with clients and estimating. You have to get it right because if you’re under quote there’s no one to blame but yourself.”

Luttrell stresses that surrounding yourself with reliable help is vital. She also learned to be creative, taking her children to job sites when feasible and stopping at playgrounds to let them play off their energy.

“Raising children and building a business are some of the hardest things to do, and doing them at the same time sometimes feels impossible,” she says. “Many times I didn’t think things through; I just went for it and managed to adapt to different situations. You have to problem-solve as a parent and you do the same thing running a company. I enjoy learning, and I found that I constantly had to do that raising my children and running the business.”

In looking to help women continue to grow as entrepreneurs, fighting back against the stereotypes of women as primary caregivers is a good place to start. Empowering women to strive to look after themselves and forge a business model that employs not only themselves but others as well helps a society to grow and flourish.

Fortunately, women entrepreneurs are becoming more known and recognized as numerous organizations work to spread awareness and support them and help further their presence. Women Owned Logo, www.womenownedlogo.com, is a great resource where female entrepreneurs can connect and potential clients and supporters can find women-owned companies and businesses to patronize. An initiative of Women’s Business Enterprise National Council (WBENC) and WEConnect International, the Women Owned Logo can be found on product labels, websites and storefronts to raise awareness: “When you support Women Owned businesses, you are investing in women’s economic empowerment, gender parity in commerce, vibrant communities, and the growth of the economy overall. Buying Women Owned is both socially conscious and economically sound,” the site explains.

According to the website, as of 2017 there were an estimated 11.6 million women-owned businesses in the United States, employing nine million people with $1.7 trillion in revenues, with growth over the past 20 years of 114 percent. However, once again, the problem is monetary: When it comes to getting loans for these businesses, only four percent of total dollar value of all small business loans go to women-owned businesses, even though women reinvest up to 90 percent of their income in families and communities, compared to only 40 percent for men.

Another informative website is www.femmebought.com. This women’s business community of “smart, driven and passionate advocates” works on taking action toward levelling the playing field with dedicated and ongoing support for women-owned business while helping others to do the same, by encouraging both companies and consumers to help more women reach the top of their field. The website’s goal includes empowering women to “gain economic independence through entrepreneurship,” while also “supporting passionate women connecting, sharing, learning and growing together.” Women have much to bring to the table in the world of business, but finding a seat that not only welcomes them but works along with all of their other responsibilities can prove daunting. Education, understanding and support from consumers can make a world of difference.

Owning your own business, however, is always risky, and this past year has brought that reality to the forefront. Unfortunately, the pandemic, while devastating to many businesses in general, has proven particularly brutal to women in business. According to a Global News study of more than 10,000 small businesses, Canadian women-owned businesses are taking nearly twice as long to recover from financial setbacks brought on by COVID-19 compared to businesses owned by men.

From job losses to significant drops in revenue, women and women-owned businesses are feeling the full effects of the pandemic’s economic devastation, according to a study that included more than 10,000 small businesses.

The study found that, on average, “Industries most affected during the pandemic are women dominated, so education, restaurant, hospitality… if you are a self-employed person who has a business that works in these industries it’s been harder for you to recover because those industries really have been shut down.”

The study also found Canadian women-owned businesses took 10 weeks to start to rebound, compared with five weeks for male-owned businesses. In some instances, businesses owned by men experienced no disruption at all.

Luttrell, like a true entrepreneur, says she has been taking the ongoing effects of the pandemic in stride, the same as she did when her kids were growing up – navigating loss of income, balancing bidding on contracts, reading blueprints and doing paperwork, getting the children ready for school and being back in time to pick everyone up, making dinner and helping with homework before bed.

“I found honesty was key with customers and with raising a family,” she says. “Life is busy and ever-changing. I take pride in doing a good job for our clients, just like I take pride in my children and the amazing adults they’ve grown into.”

Being dedicated to both family and business means building trusting relationships that continue to grow and flourish no matter the difficult circumstances that may arise.

This International Women’s Day, celebrated worldwide on March 8, what better way to honour women than by supporting them in their businesses? Reach out and find a company that can use your support, either financially or by spreading awareness, and help grow and enrich a business that can make a difference.

So It's True About Diversity in the Workplace…