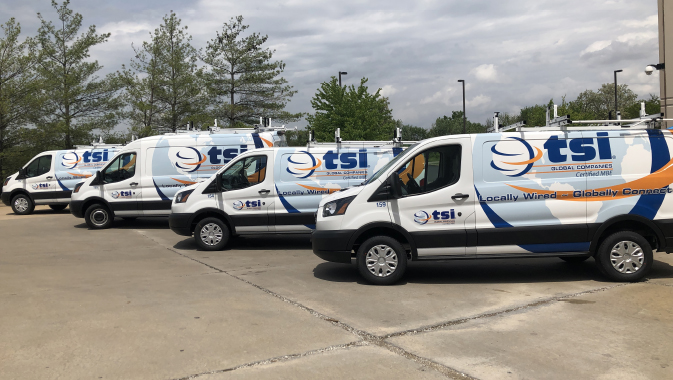 The St. Louis Rams defeated the Tennessee Titans in 1999’s Super Bowl. The St. Louis Cardinals swept the San Diego Padres to win the 2006 World Series. And in 2019, the St. Louis Blues beat the Boston Bruins 4-1 for their first Stanley Cup. What do these champions have in common?

TSI Global Companies designed and installed the audiovisual and telecommunications systems for each of these winning teams’ facilities just before they won it all.

And while TSI doesn’t guarantee a championship for your city’s team, the company will take care of all the telecom and security needs for offices, hospitals and universities anywhere in North America.

TSI Global Companies is an electrical and technology systems integrator headquartered in St. Charles, Missouri just northwest of the state capital with close proximity to the home team stadiums.

“For the Rams, we did a total retrofit of their facility and converted everything to IP-based converged technology where everything rides on the network,” says Robert Bray, TSI President and owner, who founded the company 33 years ago.

“And the next year they won the Super Bowl. When the Blues were doing a massive renovation of their enterprise center, we helped with that and we built their new practice facility and then they won the Stanley Cup. So we’re still waiting for our checks to show up – or our Super Bowl ring.”

A custom system for everything
The company delivered turnkey game-changing technology to help with coaching, player training and even the fan experience relayed on the jumbo screens.

For the Blues facility, for example, TSI provided a custom system for everything from the music that the players can work out to (and Bluetooth connect to their phone) so they can get pumped up before practices or games, to the interactive touch screen displays and video that the coaches can present to the players right from their desks.

“The video coach can feed stuff from his office into the locker room or into the coach’s office or the war room, if they need to,” says Brandon Krepel, TSI Technical Solutions Director. “We worked on getting them interactive whiteboard software and customizing it, so you can do the player lineup and your depth chart on these large touch displays.”

Krepel has also worked as the ‘sound guy’ for the Blues as a side gig and says many of his TSI colleagues are also professionals with roles in the community, like a college professor in an audiovisual arts program. The company has drawn top talent to its workforce in an industry that is constantly evolving and demands the latest innovations.

TSI has also begun giving new audio graduates immersive training in the company’s industry-shaping body of technological knowledge and methods; an important part of its strategy to maintain and extend these skills as earlier generations of audiovisual professionals retire.

In this business, clients just naturally expect the team to be able to deliver on the most advanced and effective solutions available anywhere.

Processing mega-power
“A big challenge is that the processing power in modern devices is both a blessing and curse,” Krepel says.

“A few years ago you’d have small processors that are dedicated specifically to doing a certain task. But now manufacturers can use generic Intel processors that can do everything the old processors could and more, so these devices don’t have to be task-specific; they’re software-defined. Things that used to be accomplished on dedicated hardware, like video conferencing and audio mixing, are now actually software living on a computer. You have the downsides of working with computers to contend with, but the possibilities are endless.”

Since Robert Bray started the company in 1987, there’s no question he’s witnessed a tremendous shift in how buildings operate. “The technology industry has been rather spicy over the last 30 years,” he says, looking back on his career.

“In essence, the technology now is just as important as the electric in any building. Whereas it used to be nice to have, in a facility, now it’s crucial infrastructure for the way the world’s running with telecommunications, video conferencing and content sharing. You don’t want to take your internet down and see what happens.”

TSI clients become technology partners because they rely on the company expertise for a full complement of services, including cabling, digital signage, security access control, cameras, surveillance and communications.

Instead of dealing with a bunch of partners or subcontractors that competitors will bring into a project, TSI has all the subject matter experts in-house, under one roof. That’s reassuring for everyone if problems come up, as it means only ‘one throat to choke.’ TSI’s combined knowledge and expertise runs deep, and Bray says the more challenging the job, the better.

From fiber-optic to full bouquet
Bray started out in telecommunications with a firm that offered long haul fiber-optic cable installations for phone companies like AT&T and Verizon. He traveled the country, making a name for himself as one of the first fiber-optic experts, splicing cable for long distance carriers. Then he spent four years traveling to military bases to build fiber plants.

When desktop networking took off in the mid-’80s, he returned home to St. Louis to start installing the cabling infrastructure as the media backbone of choice for buildings, facilities and campus environments.

That was the turning point he was looking for. He and a partner bought the telecom division and founded TSI, literally plugging into the local area-networking services market as a subcontractor for signature clients AT&T and Hewlett Packard.

“We were sort of the first one at the dance back in the day,” he says of being in the forefront of communications networking as it realized its potential and came to life.

By the mid-2000s, with IP convergence underway, Bray started buying into audiovisual smarts and parts, and began engineering solutions to complement the physical cabling side of the business. The company has an engineering test lab to trial new setups before they go to clients, and different room types, like Webex, Microsoft and a Zoom conference room, throughout the company headquarters, that match the variety of what gets installed in the field.

“We’ve grown over the years to have really everything, cradle to grave, from a telecommunications perspective. And as I’ve preached for 33 years, that reputation will feed you forever. We’ve got customers that we’ve had for 30-plus years that lean on us to do these types of networking year after year. We’re also minority owned by the Miami Tribe of Oklahoma and very proud of that support.”

Setting up success
During those 33 years, TSI received a lot of attention for the cool tech it brought to sports stadiums, but it’s those same sophisticated solutions that the company delivers to all its projects that have transformed the company’s clients, setting them up for success.

TSI has designed and outfitted spaces for conferencing, training, digital signage, video walls and specialty needs like combinable multipurpose rooms, call centers, and network operation centers for every size of organization right up to Fortune 500 companies.

There’s even a bit of “Times Square technology” in Clayton, a suburb of St. Louis, with a dynamic LED video wall at downtown Centene Plaza, a recent TSI creation.

“As you drive or walk down the street along the mezzanine of this building, you’ll see a ribbon and then a large display at the end with seamless content that goes across it,” Krepel says. The content can also be seen inside the lobby.

All that smart technology for pro sports venues can be used with equal effect in corporate and commercial environments. As Bray sees it, “Whether it’s a multipurpose space or a lobby space, businesses want to have a way to wow people. That’s where we can help.”