Life is Better at the Beach 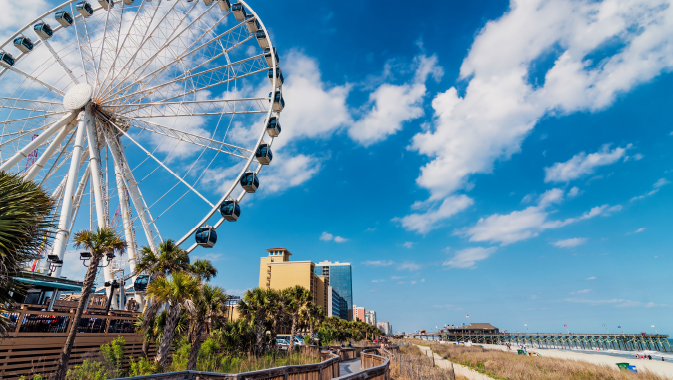 Myrtle Beach, South Carolina is recognized for its miles of beaches, ocean air, the bright lights of boardwalk and promenade, and the nighttime glow of its SkyWheel. But more than that, it’s part of a region that’s becoming a hive of activity and opportunity.

Per U.S. census data, Myrtle Beach is the second fastest-growing metropolitan area in the U.S.

Sandy Davis, President and Chief Executive Officer of the Myrtle Beach Regional Economic Development Corporation (MBREDC) confirms it. “We’ve seen a large number of Northerners move here and buy homes over the last six months. A lot of them also have businesses – in other locations – who have been reaching out to us.”

Davis and the MBREDC are at the fore of efforts to promote Myrtle Beach and the collective municipalities that make up Horry County. They’re the force behind efforts to grow the economy in Horry County and despite the persistence of COVID-19, these efforts have not slowed or faltered.

The organization promotes collaboration and a regional approach to development by acknowledging the unique needs of each municipality in the county. “We recruit based on what is best for each area,” says Davis. “They know that just because something doesn’t necessarily locate in their city, it will still bring an economic impact to the area and to their businesses as well.”

There is strong local support and that’s being reinforced by a concerted effort to buy local and mitigate the economic impacts of COVID-19 on businesses in the county. A local distillery even adapted its operations to produce hand sanitizer and another retooled to produce masks to ensure the community health and safety.

Getting a move on
Harnessing their collective efforts, businesses are moving forward in the face of challenge and MBREDC is offering support every step of the way. Davis recently distributed 425 infrared thermometers on behalf of the Federal Emergency Management Agency (FEMA) to help keep local businesses safe and operational.

The gesture was well-received as many were waiting on thermometers that were on back-order. It was a great opportunity to conduct site visits and better understand what specific challenges local businesses were facing, and a chance to boost well-being and morale county-wide.

Amongst the hardest hit sectors have been tourism and hospitality, but despite these challenges, MBREDC has still managed to lock in a couple of economic wins for the community. The organization was born out of the need to diversify the economy, and that is what it has done.

Global Metal Powder has announced plans to construct a 16,000 square foot facility in Aynor at the Cool Springs Business Park, one of two industrial parks in Horry County. The $1.5 million capital investment will result in fifteen new jobs and will introduce advanced manufacturing technologies to the region.

Similarly, Vulcan Materials Company, an aggregate company, plans to establish a presence in Conway on a site with railroad frontage. This $3 million investment is especially important for Horry County, as it validates the decision to bring its short-line railroad back into play four years ago.

“We’re trying to carry on business as usual, but it’s been a little different,” says Davis. “We still continue to recruit or assist our existing industries in expanding. We still try to retain high-quality employment and workforce-development programs.”

A force for good gets better
Workforce development has been a major focus in Horry County. The region has been impacted by brain drain, as those who are raised and educated there often leave in search of greater opportunities more relevant to their skills. To address this, MBREDC joined forces with its education partners to give graduates more reasons to want to stay.

As Davis explains, “We began looking at what the colleges offered and started recruiting industry that would be able to benefit from those programs, but also keep local students here and draw students here. We had people graduating with great degrees, but they were working in hospitality and not really utilizing what they had gone to school for.”

The region is home to Coastal Carolina University, and Horry Georgetown Technical College in the county, but also to partnerships with Webster University and Miller-Motte Technical College, all of which work together to ensure that industry and education are on the same page.

Davis highlighted a workforce development program called Ready SC, which is orchestrated by the South Carolina technical college system. “One of our great recruitment tools,” she says. “They work with the company directly, when we’re recruiting, to find out what the skill needs are,” meeting those needs through free job marketing, employee screening, targeted training and work placement.

“The program has been so successful,” Davis continues. “A company we recruited a little while ago named Teknoware – their five-year plan was to hire around forty-eight people, and within their first year they hired seventy and their production was up.”

Informed decisions
Davis has no reason to recruit companies that make little sense for the county. To help make informed decisions she works with SC Works to survey available data related to workforce and resource availability, demographic information, and other relevant material that can help to ensure projects in Horry County are a success.

MBREDC is certainly not afraid of leveraging partnerships in the interest of growth, which is true of its involvement as one of nine counties in the Northeastern Strategic Alliance (NESA), a group that brings together economic developers, site selectors, local, county and state representatives to keep South Carolina counties abreast of the trends and economic conditions of the day.

“We hear from consultants about what kinds of businesses are still looking to expand; the type of businesses that are being put on hold; and what types of development they are targeting and how that has changed,” explains Davis, who highlighted back-office support as an example.

“A lot of tech companies realized that it is a lot easier to work from home than they thought,” Davis notes. “Once they were forced to do it, they realized how much money they were saving. You really can make it work.”

“We have two industrial parks that are kind of in rural areas and were hard sells over the last ten years. One is off of Highway 319 and the other is off of Highway 701, within one mile of Highway 22,” says Davis of Cool Springs Business Park and Ascot Valley Industrial Park, respectively.

Ascot Valley Industrial Park is a former textile mill site and according to Davis, “We have marketed this hard now for at least the past seven years, a total of thirteen different parcels. I currently have contracts on all of those parcels but two and that has pretty much all taken place since the middle of last year.”

MBREDC is experiencing the same success at its Cool Springs site and while this is great news, it poses a new challenge as soon the organization will have to identify new land and industrial properties that can be marketed as prime for development.

New life
One possibility that is development-ready is downtown Myrtle Beach, which has been on MBREDC’s radar. The Myrtle Beach Downtown Redevelopment Plan was adopted to breathe new life into the area. As Davis explains, “It’s the area that used to be the busiest but new development has left it behind. But it’s a new area we’re working in.”

Davis highlights a new brewery that will call downtown Myrtle Beach home. “They are renovating an existing building that was old. They received historical tax credits and I think that is going to be the beginning of rejuvenating that area.”

To showcase all that is taking place in Horry County, Davis has had to identify new ways to promote the region and its many assets. “We’ve had to change our marketing this year,” she says, reflecting the MRBEDC’s willingness to adapt in the interest of progress.

Part of the organization’s greater plan is to improve its digital presence and its virtual connection with existing and prospective businesses. To ensure their needs are met and lines of communication are always open, MBREDC is bringing the region to them with new energy (virtually speaking, of course).

To mitigate the impacts of COVID-19 on businesses the South Carolina Department of Commerce is offering funding for virtual recruitment. MBREDC applied for five $5,000 grants to shine a spotlight on five different sites in the county and each application was successful.

The $25,000 virtual recruitment grants will help the county’s EDC create videos that give prospects a first-hand look at the available sites. The videos will provide them with info and statistics on logistics, infrastructure, proximity to markets and relevant demographic conditions and so make a decision to relocate all the easier.

On all levels, MBREDC and its partners are doing a great job of promoting the region and have clearly taken full advantage of every opportunity that has arisen. By marketing itself as an attractive place to invest and a great place to call home, Horry County is living proof that life is better at the beach.

Life is Better at the Beach