Bringing New Focus and New Technologies to the Robotics World 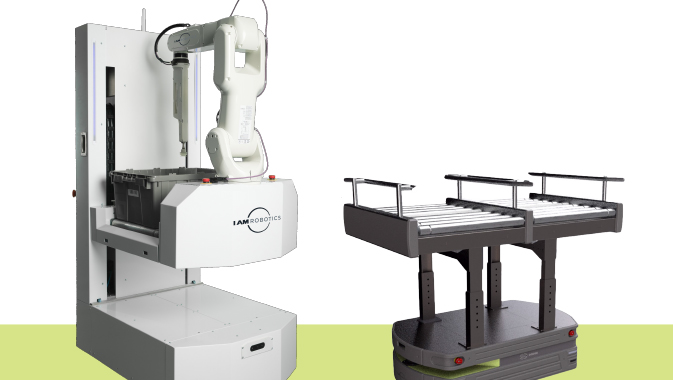 IAM Robotics is a Pennsylvania-based automation maker that has been providing autonomous solutions for facilities across the United States since 2012. The company’s stance is that adaptability and flexibility are the keys to a viable and profitable future.

According to Wes Reid, Senior Vice President of Product and Operations, the company’s products evolve around a set of rigorous engineering and development disciplines which are similar to those employed by many start-up enterprises. However, whereas the early days of the business involved more experimentation with styles of focus, the company now operates under a series of disciplines like ECO (engineering change order) processes and design freeze which help create a fuller and more compelling product.

The management team at IAM Robotics, Reid says, is “acutely sensitive” to maintaining the start-up type of workplace culture that co-founders Tom Galluzzo and Vladimir Altman envisioned from the beginning. That remains a compelling goal as the company grows and the leadership team is challenged to keep a sense of earnestness and sincerity alive in the business.

So far, that’s an objective, and incentive, that remains strong and positive.

Tripling in size
Since Business in Focus’ initial article on the company in early 2019, IAM Robotics has more than tripled in size with sizable expansion on the technical side including the addition of “a large number of software engineers [who are] covering robots and fleet management capabilities,” according to Senior Vice President of Commercialization Rich Flati.

This is an important step because the company is now developing considerably larger systems involving robots and complex coordination.

There has been growth on the commercial side as well with the addition of more solutions engineers and an all-new facility that has significantly increased the company’s testing area. Thanks to this development, the company now looks to further develop its autonomous mobile manipulation (AMMR) solution and will be releasing an AMR (autonomous mobile robot) where volumes are typically in the hundreds or thousands annually.

This task will be considerably easier given the foundational technology IAM Robotics used to develop Swift will be also used in the AMR. And with the increase in manufacturing space to more than three times what it had previously, IAM Robotics is establishing high-volume assembly lines and a manufacturing configuration to support this growth.

Building on Bolt AMR
IAM Robotics’ latest innovation, the Bolt AMR platform, is at the forefront of its focus and a point of pride for the company. The Bolt started with the company’s mobile technologies used for its Swift robot – from which the company expanded upon further developing the safety features needed for a collaborative AMR.

The Bolt itself will be rolled back into future road-mapping. Reid notes that it will become a white-label AMR as well as the standard mobility platform for all of the IAM Robotics product lines going forward. From the beginning, IAM Robotics envisioned that Bolt would be a modular and flexible platform for as many uses as possible, providing manufacturing and warehouse facilities an adaptable solution that scales with the operational changes that occur in business.

Going forward, Bolt will have a complete electro-mechanical interface that will be standardized when it goes to the market; in fact, Reid notes that the interface has been nicknamed the Bolt Power Take-Off and features “a complete set of power and signaling that goes between any top that a customer chooses to use, Bolt itself, and a standard API [applications programming interface].”

This platform allows IAM Robotics to take the Bolt robot and platform in many directions and is a hugely promising boost to the company’s product lineup.

Standing out
Flati cites the company’s robust product line as something that helps it stand out in the industry, especially when combined with the way IAM Robotics enters engagements with its prospective customers.

The company uses what Flati calls “bottom-up modeling,” which involves determining where and how it can introduce its technologies in a company, along with using a lot of flexible robotic resources that can perform and accomplish tasks very differently from “legacy technologies” (older solutions used in a typical factory setting).

IAM Robotics, according to Flati, takes great care incorporating its products into existing buildings, a process that involves what Flati refers to as ‘sensitivity analysis’, which determines how IAM Robotics’ solutions will perform under both normal and potential operating conditions over its lifetime at both non-peak and peak volumes.

Part of this analysis is explaining to potential customers why investing in new types of automation is a better long-term investment than any other solution. According to Flati, one has three potential options as a building operator: continuing operations with the same building and the same legacy technologies; using the same building but retro-fitting it with newer technologies (like those offered by IAM Robotics); or, leasing a new building with these new technologies.

Flati emphasizes that IAM Robotics is pushing for existing facilities to be made more robust to avoid the longer lead times and greater capital investment involved in moving into a new building; however, communicating this message to all customers is a challenge that must be met affordably and quickly. Building operators faced with the uncertainty of 2021 are already gun-shy.

An interesting year
Flati summarizes wryly that 2020 has been a remarkably interesting year. Fortunately, within the robotics space, there is still a lot of interest in the type of automation that IAM Robotics specializes in.

The industry has changed its focus away from mainly dealing with imposed constraints (mostly having to do with labor) and Flati now sees two emerging tendencies in the marketplace: operators (the people or companies running buildings) who are dealing with high levels of throughput which they are striving to increase; and operators who, no longer dealing with labor scarcity, are bringing labor into their processes and maintaining the level of operations.

Flati and IAM Robotics realize that both conditions lend themselves to automation and look to take advantage of this.

Still not currently decided in the industry is how representative this year will be of the future, as it becomes clear to everyone that 2020 was a step change. The change around direct-to-consumer volume has been marked with both consumers and businesses altering buying habits, and much of the automation designed for specific operating conditions losing those specific conditions – as part of the widespread changes wrought by Covid-19.

Flati predicts that retailers may go into the 2020 holiday season with some trepidation but, in 2021, the industry “will likely see some interesting approaches in incorporating [IAM Robotics’] flexible automation into existing buildings.”

The remainder of 2020 at IAM Robotics will be spent working on production-level prototypes for Bolt, along with collaboratively testing production tooling and the integration of the first tops onto the platform with the company’s top partners. The production and engineering team will be heavily focused on Bolt along with completing deployment of Swift to one of the company’s largest overseas customers (A.S. Watson in the Netherlands).

Going heavy duty
With only months remaining in 2020, Reid says that the attitude will be “heads-down all the way to the end of the year.”

Reid also reveals that the company has been conceptualizing and road-mapping an all-new product that will exist between Swift (a robot built for “pure individual piece-picking”) and Bolt (“a heavy-duty bulk material transport platform”). This new development focuses on carton and tote handling, and great expectations have been stirred with this third product line that leverages the functionality of Bolt as its platform.

Reid is adamant, however, that this potential product does not mean that the company is moving away from the piece-picking market. In fact, IAM Robotics is working in concert with national company ARM (Advanced Robotics for Manufacturing) and “a key medical product supplier” on a next-generation technology that will learn to pick from cartons and expand the number of pickable SKUs that the Swift robot can address.

A flexible future
Flati’s thoughts are that, as the future remains a conundrum to the industry in so many ways, fortunately the company’s way of planning has always been to keep in mind all the possible things that could happen (disruptions, interruptions, and worse) so that solutions are flexible and thus successful.

Flati hopes that customers within the robotics space do not look at investing in technology through a narrow set of future operating conditions but instead view the future more broadly, accepting solutions that can work in unplanned-for situations.

“The operating life for our solutions is five to ten years. So how can our solutions allow them to better adjust to changing conditions versus [the more inflexible] legacy technologies?” Flati asks.

Although it’s hard to get people to break away from what’s considered safe, he says, it actually adds risk to make solutions more rigid. In truth, investing in flexibility is the best possible approach.

Flexibility is part of what has made IAM Robotics a top name in its field for the past eight years and, moving into its ninth year in 2021, its solutions are hugely improving efficiency for both its established customers and the new ones.

Bringing New Focus and New Technologies to the Robotics World