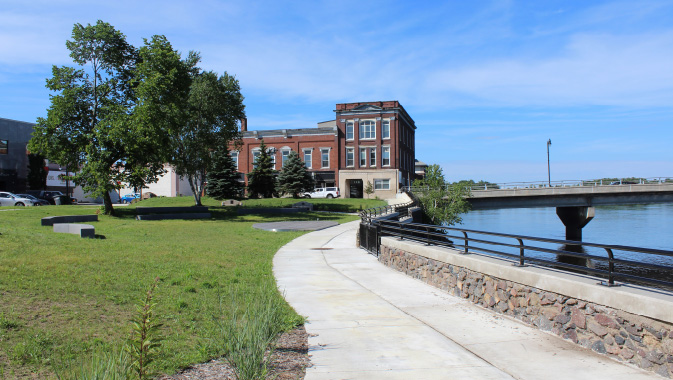 Building on its central location, rich history and accessibility to airports, highway and rail transportation, Wisconsin Rapids is building on its strengths and investing in its people to create a unique sense of place.

The City of Wisconsin Rapids offers more than 25 miles of wooded and municipal recreational trails, stunning riverfront vistas, numerous parks, golf courses, thriving businesses, festivals, historic buildings, and a brand new Aquatic Center for 2020. The city is poised to continue its diversification in the face of present challenges, investing in its people and their industry as it looks to a future that embraces a rich mix of commerce, leisure and a vibrant workforce.

“I really want to share what Wisconsin Rapids has to offer and what it’s done to invest in itself,” says Kyle Kearns, Director of Community Development. “Over the past several years we’ve placed priority on our citizens and on the betterment of the community, through improvements to our parks, the creation of the Aquatic Center, through redevelopment of some vacant sites, and through attraction of new industry.”

In particular, the exciting and unique Aquatic Center — part of a much larger Wisconsin Rapids Recreational Center — is at the forefront of a redevelopment unveiled in July.

This $12 million project came to fruition thanks to funding from diverse sources. According to wirapids.org/wrrc.html, “Of the $12 million project cost, the Legacy Foundation of Central Wisconsin has invested $2.5 million and has pledged an additional matching grant of $500,000, to be raised by June 2021. Additional fundraising activities through the Mayor’s Youth Council and other groups have raised approximately $36,000 so far. The City has committed to investing $9.5 million through capital borrowing and is looking to fundraise for $1.5 million of its portion, recognizing that every single dollar raised privately is approximately $1.30 less for which taxpayers are responsible.”

Although the pandemic hampered the full opening of the much-anticipated Aquatic Center, City Council elected to open the facility at half-capacity during the hot summer months, allowing locals to enjoy the numerous exciting features such as waterslides, Leisure Pool, waterwalk, a Lazy River with rapids action, and a kiddy version of the Lazy River, splashing good fun at just 1.5 feet deep.

“I think it’s pretty unique to have one of those kiddy lazy rivers in the state,” says Kearns.

COVID-19 delayed the installation of the zip line and climbing wall. However, the concession stand was a hit.

“It was exciting to have something that our citizens could partake in if they felt comfortable,” he says of the park’s cool and inviting water features through those hot July days. “It was great to see our community had this option to enjoy a very popular spot safely.”

He says that none of it could have happened without the community donations and citizen support to fund the project and has high hopes that the facility will be fully open next summer for the entire season. Also, unusually, the facility was built to act as a warming house in the winter, with an area that can be flooded to create a large ice rink.

“The facility can operate 24/7, 365 days a year in one capacity or another,” he says. “We’re not shutting down the entire facility in the winter months, but can still operate it with at least a portion used for ice skating, which is a pretty unusual feature.”

The next phase of development involves Wisconsin Rapids’ parks and riverfront.

Over the last several years, the city has invested in the riverfront and several parks, such as the current Veterans Memorial Park and Mead Rapids View Park, with the construction of a 76-foot long balcony over the Wisconsin River; an event terrace where Lunch by the River (a weekly summer event with dining and entertainment) is held; and seating platforms throughout the park.

“Wisconsin Rapids is unusual in that most of our downtown riverfront is public space, so we don’t have a ton of private ownership of the riverfront,” says Kearns.

Other features in the area include a fishing pier, kayak launch, picnic tables, installed grills for public use, and city-wide connection with the multi-use trails system along the entirety of the river. “The trail at Demitz Park has fitness stations that runners can utilize, and the entire park was also designed with handicap accessibility, so anything within the park is fully accessible.”

Unfortunately, says Kearns, while all these park and riverfront improvements were completed over the summer, due to the scale of the pandemic the city hasn’t yet experienced what it should expect in a normal year. Many events were canceled or postponed.

“It’s both good and bad, as it allows the grass to grow in nicely at Veterans Park,” Kearns jokes, “but it’s a little demoralizing when you make this investment, and you see the spaces being underutilized. Of course, it’s for the protection of the public health and we recognize that improvements were made for the long-term. Certainly, this pandemic will not be for the long term.”

Another major addition, The Boys & Girls Club of the Wisconsin Rapids Area, which opened in June, is also a source of new pride to the city.

Housed along West Riverview Expressway in the former Rapids Mall building, The Boys & Girls Club came to fruition via the YMCA – in collaboration with several partners, including the Veteran Affairs Clinic – renovating and relocating within the 95,000-square-foot facility.

“It was a way that all three of those organizations could improve their efficiencies, share space, and in some cases, share employment,” says Kearns. “It’s a really good example of partnerships through communication, and the community stepping up. We have a large philanthropic group here, and once they see a need they’re not shy to assist in funding that need.”

From a Veterans Affairs standpoint, the development gives access to some of the newest technology, and the YMCA pool for therapy sessions. “It certainly fills a gap in our downtown, and it helps people utilize the facilities, who in turn patronize local restaurants and other businesses while they’re downtown.”

Wisconsin Rapids is also home to big business. Matalco, an aluminum billet manufacturer will provide more than 80 higher-wage jobs and is housed in a 100,000-square-foot facility, with completion due later this year.

“The attraction of Matalco has certainly helped to diversify our workforce and expand industry and business,” says Kearns. “They like our location because of proximity to one of their largest customers to the north, along with rail access, the workforce, and obviously the incentive package we were able to assist with, [with] their completion date.”

Kearns also hopes that, down the road, the company will serve as a catalyst to others, whether associated with this industry or in any other business.

“Once you land something like that, it can draw interest, but we also want to draw interest to our small business,” he says. “We’ve got a lot of entrepreneurs that are looking to grow, and I think we’re starting to make connections with those businesses, and meeting their needs.”

Ensuring current businesses, too, stay and grow within the community is vital, especially with the pandemic causing closures around the country. Unfortunately, this has also already occurred in Wisconsin Rapids. The city’s largest employer, the papermill, with more than 900 employees, has announced its temporary closure and noted that it may not be able to restart down the line.

The city, along with many local representatives, elected officials, the technical college, workforce officials, union representatives, and many of the state agencies, including the governor’s office, have put together response teams to discuss the next steps. These include job fairs, impacts on industry, new opportunities, and coordinating responses to hopefully help get the mill up and running again, whether under new ownership, or by adapting the existing plant to produce a different paper product.

“It’s good to see that during this pandemic we have so many willing individuals and partners and organizations that recognize the importance of something like this in our community,” Kearns says. “A lot of individuals have stepped up to provide in-kind support and resources. We don’t know what the ultimate outcome will be, but we’re going to do all we can to assist in whatever way possible.”

From the standpoint of economic development, both business and housing opportunities will result from creating a sense of place within the community, and encouraging events and activities within that place, says Kearns, which is why he thinks it’s important to make this investment rather than placing dollars elsewhere in the community.

“I think we’ll see the results of this hopefully in the next several years when others choose to invest in and around the downtown area where we made these recent investments,” he says.

With regard to how successfully industries and businesses bounce back from recent events, Kearns suggests re-examining existing tools that have been proven in the past, and placing priority on opportunity zones, TIF (Tax Increment Financing) districts, new-market tax credits, and other tools, to ensure businesses have access to resources. All the while actively striving to grow and attract more, which will positively impact the community as a whole.

“Wisconsin Rapids’ biggest accomplishment has been the investment we’ve placed on community infrastructure with regard to parks, the Aquatic Center, and our roadways,” he says. “We’ll continue to do that because ultimately we’ll create an improved sense of place within our community, which hopefully will improve vibrancy and vitality, and bring people here to stay.”

He stresses that access to parks, natural resources, and arts and culture all help produce that all-important sense of place and community, which is why the city has chosen to invest in those areas. And despite the numerous challenges of this past year and their negative effect on the city’s papermill, Kearns is extremely proud of how Wisconsin Rapids has handled the unprecedented series of events.

“We’ve done a fair job of just weathering the pandemic,” he says. “We still have businesses and citizens wanting to go get a shovel in the ground, wanting permits for additions on their home, or to build new homes within the community. We have small Industries, whether coffee shops or restaurants or convenience stores, wanting to continue to build.”

Getting past the pandemic is a goal. But so is the continued redevelopment of the downtown: new construction and the injection of new building into established neighborhoods, and developing vacant or underutilized lots to increase value both in dollar and in community use and aesthetic terms.

“We’re looking to achieve a mainstream designation as a Main Street Community in the near future,” Kearns says. “We want to define ourselves as a place within Wisconsin and even within the nation, and then focus on strategically marketing and promoting the community as a place to live, play and work.” 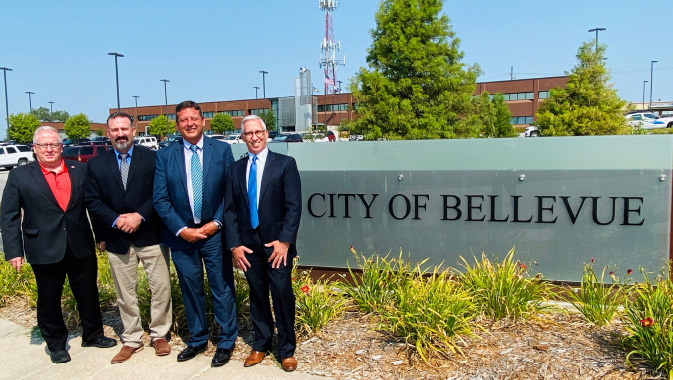