Town of Goderich, ON 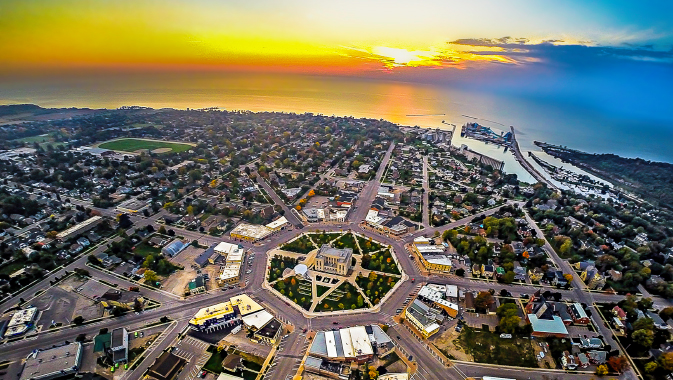 Flowing along the atmospheric eastern shore of Lake Huron, Goderich, Ontario is a thriving small urban municipality within less than half a day’s proximity to major urban hubs such as Kitchener-Waterloo, London, the GTA, and the U.S. border. Its beauty, economic stability and progressive business practices act as a magnet to attract residents of all ages, tourists, small and medium entrepreneurship, and long-standing partnerships to its prospering economy.

With about 8,000 residents and a rich and interesting history, Goderich was long ago nicknamed the Prettiest Town in Canada, a testament to its picturesque location on the waterfront and bountiful parkland and recreation areas. The stunning architecture, complete with recognized heritage conservation districts and the unique octagonal “Square” that comprises the downtown core, serves to keep the century-old moniker relevant.

“There is no shortage of selling points in our town, but first and foremost it’s lifestyle,” says Mayor John Grace. “Pre- and post-retirees are driving our realty and housing market. They’re coming to Goderich to enjoy access to good recreation and leisure, the charming downtown, fibre optics, and an environmentally conscious community. We are also very focused on investing in initiatives and visioning that is serving to build our younger demographic.”

That welcoming lifestyle also offers convenience, pride of place and absence of high costs and traffic – and of course, the charm and beauty of the town’s truly one-of-a-kind street design.

Recently retired CAO, Larry McCabe, is steeped in the history and stories of the Town, after working in Goderich’s municipal administration for 43 years. “The uniqueness of the downtown core must be seen to be truly appreciated,” he says of the octagonal Courthouse Park. “It is referred to by residents as ‘The Square’ and is considered the Downtown BIA, with businesses facing toward the centre of the park, and along eight radiating streets. It’s a unique layout, and planners have come from afar to see it.”

Registered as a Historic Place by the Government of Canada in May 2007, the distinctive Square’s design is called a “radial composition” and was inspired by ancient Roman city plans. It’s truly the centrepiece of the town and there’s so much more to appreciate as well.

Goderich has been very ambitious in moving infrastructure projects forward and is successfully positioned for growth.
•The Port development, in conjunction with the Goderich Port Management Corporation and the Province of Ontario, has completed five new acres of port lands with a new wharf for expanded operations.
•Bannister Park, a $4 million development with three ball diamonds, a skateboard park, a soccer pitch and pavilion with accessible washrooms is complete and outfitted to accommodate greater volumes in team sports for local enthusiasts and traveling tournament groups.
•Continuous waterfront enhancements including rebuilt stairs along the bluff with bike troughs included to encourage active transportation and the current undertaking of restabilizing the shoreline to counter the effects of climate change.

Mother Nature, however, can be unkind to waterfront locations, and Goderich is in the midst of repairing damage done by high water levels and ongoing erosion. “It’s quite extensive, with water damage done over late summer and through the fall, but our council has agreed that engineers move forward as high priority,” says Wilson. “We’ll spend about $1.5 million installing and enhancing shoreline protection, working to create a new wall to break the energy of waves. In spring, we’ll start to get things cleaned up and get the beach ready for the upcoming season.”

“One of the town’s primary strengths is the valuable partnerships we’ve entered into with the private sector,” says McCabe. “We have established a number of public private partnerships to undertake the operations of some of our assets.”

Goderich Harbour, bought by the Town in 1999 through a divestiture program using user fees and no local tax dollars, is heralded as the only deep sea port on the east side of Lake Huron, and is home to one of the largest operating salt mines in the world, Sifto, owned by Compass Minerals. Approximately 7.5 million tons of road salt a year is shipped out of the Port of Goderich via one of the largest underground salt mines in the world, running 530 metres for 2.7 square miles beneath Lake Huron. From 1999 to 2017, $29 million in user fees have gone into harbour break walls, river walls and piers. Town Council recently voted on a new operations agreement that would see additional projects determined in the port for future development.

Goderich, along with nine other municipalities, also merged with ERTH Corporation on Jan. 1, 2019, with the approval of the Ontario Energy Board, and no longer has a hydro company in its name. NRStor is a pilot project that is approved by Independent Electricity System Operator (IESO) who buys all the power and pilot projects for the province, and has an approved local pilot project of energy storage, advanced energy, and compressed air in Goderich.

With the active port, the largest urban centre in the county and an airport only ten minutes away with a 5,000-foot runway that can accommodate jets, Goderich has abundant access to air, water, and transportation.

Now, with the high tourism season right around the corner, Mayor Grace says the Town is concentrating efforts to further bolster retail sales from visitors as well as from local residents themselves.

“We have such a unique downtown and shopping core,” he says. “People travel here to patronize our retail sector and enjoy the Goderich experience, making up about 75 percent of the economic impact on businesses. Now we need our residents to see that same value and we need to create compelling reasons to draw everyone to the downtown core. We have a ready-made market right there. There are definitely lots of challenges in retail today and we are facing those head-on.”

For a community of its size, Goderich tries to stay proactive about SMART practices and a keen focus on the environment. In 2019, Council formed the Environmental Action Committee to act as an expert advisory group on issues related to the environment, including the conservation of water and waterfront matters. Recent initiatives include the installation of water filling stations in high-traffic areas across the community including Courthouse Square, Lions Harbour Park, Bannister Park, at indoor and outdoor recreation facilities and various beach locations. The goal is to limit the need for one-use plastic water bottles and as such, the Town also invested in a joint initiative with Rotary to distribute metal water bottles.

Solar panels have been installed at Town Hall to power the hot water tank and the Town switched to LED street light conversion for energy savings. Now, the municipality is beginning to digitize its assets through a GIS-based inventory and inspection system which improves public safety and protects and prolongs the lifespan of infrastructural assets. The Harbour is Green Marine certified which indicates that it uses environmentally conscious practices and is screened biannually for compliance.

The Town is beginning to introduce electrical vehicles into its fleet and as such, has EV charging stations at Town Hall, the Visitor Centre and Downtown. Additional charging stations will soon be installed throughout the municipality by ERTH Corporation, making it attractive to carbon-conscious visitors and residents. The Town also owns two storm water management ponds to enhance water quality and quantity.

“Because small communities are often faced with challenges in healthcare, we anticipated the need for a strong medical community and invested in our clinic, which includes a Dynacare lab and the recruitment of 18 doctors. The clinic operates at a surplus each year. The community can easily manage family wellness between those facilities and the adjacent hospital,” says McCabe. “Other communities frequently seek us out to learn more about our model.”

A true testament to the strength and resilience of both the Town and the residents is that it continues to thrive and grow today in spite of a historical disastrous moment which occurred on Aug 21, 2011. An F3 tornado touched down, the strongest tornado in Ontario since 1996 in Arthur, injuring 37 and causing millions of dollars in damage across the town. One hundred houses, 25 buildings and thousands of trees were destroyed, but Goderich did more than survive: it persevered.

“The tornado created havoc and affected the entire community. However, it also created an opportunity to rebuild. One- and two-storey buildings grew a storey and added elevators that perhaps didn’t exist before; it also stimulated growth. Post-tornado, we put about $500,000 into a CIP (Community Improvement Plan) that created loans over and above our grants and above what insurance paid. All that was damaged has been rebuilt all while adhering to the Heritage protocols for the Conservation District,” says McCabe.

There was an economic stimulation, in that many businesses that weren’t affected also had an opportunity to improve their buildings through loan and grant allocations. The official plan was amended and rezoned for the inclusion of residential units above commercial space.

McCabe adds, “The tornado came in off the water, hitting land at 280km an hour, and went through the town in 13 seconds, leaving disaster in her wake.”

“The damage was devastating,” says Wilson. “We wanted to rebuild it as closely as we could to its original stature. The town centre was gone along with more than 100 ancient trees and it was our goal to restore that.” The 170 trees were selected by an arborist at the cost of about $500,000 to ensure that they were larger, healthy trees in a variety of species, planned for their textures and colours.

“We had a parade of trees down the highway on flatbeds, [with] fire trucks and police. People lined the street to watch and some were moved to tears at the sight of the trees being restored in the Square. That’s how much it meant to people. It was a great project, and something that I’m really proud to have been a part of,” says Wilson. “We’re frequently told that there is hardly any evidence at all that the tornado even occurred.”

“That resilience and strong community spirit are huge assets to Goderich,” adds the Mayor. “That’s who we are. There is pride in this community and that can’t always be said elsewhere. That’s a proven fact.”

Although it was devastating at the time, opportunities arose and speak to the incredible resilience of a community filled with pride. It’s this pride that comes up again and again when asked about the advantages and benefits of living in Goderich.

Newly appointed CAO, Janice Hallahan, says that it is the high quality of life that draws people and industry to Goderich – and they stay. “The community is vibrant and thriving and our job is to anticipate challenges so that we can ensure there is a continual improvement. Working closely with our community and businesses allows us to stay engaged and guarantee that we always hit that sweet spot of combining urban and rural amenities that make for such an excellent lifestyle.” 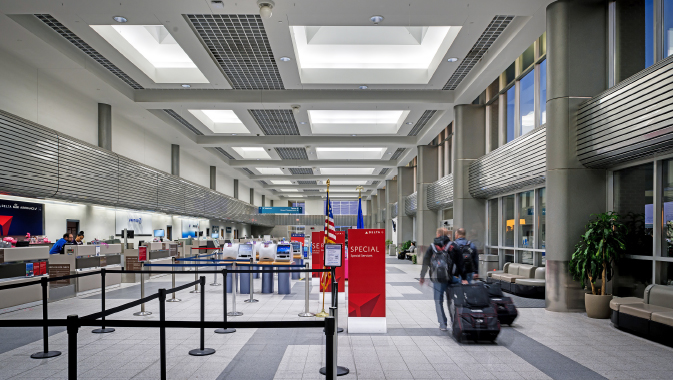