The Future is Vertical 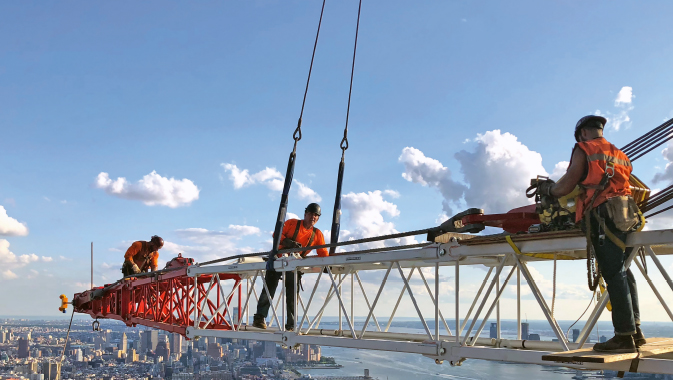 Working on cranes hundreds – or even thousands – of feet in the air, riggers are a special breed. These men and women are building a world in the sky. And as land gets scarcer and more ultra-high-rises soar over 1,000 feet, ABLE is the rigging contractor that performs these challenging projects.

Requiring extensive hands-on training and years of experience, rigging is a career chosen by the bold; many are almost literally born into the profession. “Like my mother says, I never had a chance of doing anything else,” shares Robert LaChapelle Jr., a third-generation New York City-licensed master rigger who remembers going on job sites with his father when he was a kid.

“I was born into the family rigging business. You can’t take little boys and put them on cranes at 10 years of age, and expect them to become doctors.”

Far from becoming a doctor, LaChapelle advanced to the position of vice president at ABLE Rigging – becoming one of three partners, along with President Barry Lichtenstein and Chief Executive Officer Steven Laganas.

LaChapelle started in the business in 1986, the same year ABLE was founded. Working first for other companies including Brooklyn-based rigging and machinery-moving business JC-Duggan Inc. and joining ABLE in 1999, he has gone on to a remarkable, award-winning career in this challenging industry.

Ultra-high-rise, ultra-specialized
A master rigger licensed in NY since 1994, LaChapelle embodies the capabilities, professionalism, dedication, quality, and safety standards for which ABLE Rigging Contractors is famous not only in New York but worldwide.

One of the best examples of the company’s many challenging projects is 432 Park Avenue (https://vimeo.com/185831347). Constructed on one of the most prized pieces of land in New York, 432 Park Ave. is a 125-unit condominium complex. A remarkable 1,396 feet in height (425.5 meters), the structure saw LaChapelle and the team at ABLE Rigging win the prestigious Rigging Job of the Year Award at the 2016 Specialized Carriers & Rigging Association Annual Conference held in Orlando, Florida.

Responsible for dismantling and lowering a massive Potain MR415 electric tower-crane from the roof of the Western Hemisphere’s tallest residential building using a 70,000-pound capacity Timberland ASD 35/120 Stiffleg Derrick and a GP500 hoist pack, the remarkable task was completed safely, and on time.

“For all intents and purposes, 432 Park Ave. was the first time that what we consider an ultra-high-rise building needed a tower crane taken down that couldn’t jack itself down,” says LaChapelle of the project, which saw the company dismantling an internal climbing-tower crane from a height of over 1,000 feet for the first time. Requiring extensive preparation, planning of the project took a year, execution a month and a half, and taking down the crane, 20 days.

Singular business model
“We’re the only contractor to my knowledge in the United States/North America, and possibly worldwide, where the business model is that we specialize in ultra-high-rise rigging,” says LaChapelle. “We develop process and equipment for rigging over 1,000 feet in elevation from ground level. There are other people that have experience with hoisting long distances like that, but it’s always underground and always in a shaft. We are really the only people that have attempted to do this kind of work from over 1,000 feet in the atmosphere.”

Initially using purchased equipment produced by another company, ABLE today designs and fabricates its own proprietary lifting equipment. Acting as design engineers, the company works with West 81Engineering Inc. out of London, Ontario. Together, they designed two derricks: a 50-ton version and a 12 ½-ton version, both made exclusively for ultra-high-rise rigging jobs exceeding 1,000 feet.

One of the cranes will be used on a new project, Central Park Tower at 217 W. 57th Street, on ‘Billionaires Row’ in February. A dual-use building with retail at the bottom and condos above, it will also become the only building in New York City taller than 432 Park Ave.

Demonstrably superior service, commitment to safety, and creating a unique niche for itself in the market, is seeing ABLE tackling bigger, more challenging jobs than ever before, bringing the company more opportunities. As urban land becomes costlier structures will continue growing in height, and ABLE is unique in its ultra-high-rise expertise, and unique in its custom equipment, qualified and experienced staff, and everything necessary to make today’s most demanding construction possible.

And don’t forget tomorrow’s maintenance. Again, ABLE is uniquely prepared: “Ten or fifteen years from now, these buildings are going to need paint, new cooling towers, building maintenance, all kinds of stuff,” says LaChapelle, “so not a lot of thought has been put into that. As far as I know, we are the only people looking into this, and developing equipment to fill that need in the future.”

High places, high qualifications
Operating with a staff of about 50 including office personnel, administrators, engineers, and about 30 steel workers, on-site employees hold Occupational Health and Safety Administration (OSHA 30), SST64 (a specific construction training program requiring 64 hours), and other certifications for scaffolding and welding.

Although ABLE’s three partners bring over 100 years of combined rigging experience, the company also employs three full-time New York City-licensed master riggers. With an excellent culture of safety, and with tested and tempered processes in place, ABLE Rigging also provides the highest level of insurance, and the newest, best, and most well-maintained equipment in its market.

“If there are 50 tower cranes up in Manhattan, 35 of them are contracted to us,” says LaChapelle. ABLE manages about 10 projects per week in different stages of development. As experts in projects requiring very tall cranes and specialized rigging equipment, it’s inevitable that ABLE occasionally turns down work that doesn’t fit in its wheelhouse.

“If you come to me with a building that’s a thousand feet high, we are doing your job,” says LaChapelle. “If we turn work away, it’s strictly because we feel other companies can do it without any problems, and we are too busy. We get the jobs that nobody else wants, or that nobody else can do.”

Traveling across the country taking down internal climbing tower cranes, ABLE takes on jobs for companies such as Maxim Crane, a coast-to-coast rental company specializing in rental and lifting services.

Future-proof
On its way to the future – and staying in front – ABLE Rigging’s new prototype development includes two derricks, the DC 100 and the DC 25. The DC 100 is an entirely new, modern design quite unlike some of the antiquated technology from the 1970s that’s been retrofitted with modern monitoring equipment for safety (like load moment indicators, or LMIs) and recently pressed back into service.

Built new from the ground up, the company’s latest products have Ethernet-based control systems, and are made entirely from Strenx™. This is a 100 ksi (kilopound per square inch) structural material, a special kind of tube with extremely high yield strength, and which is also extremely light and strong.

“We created a special boom and swing design for our DC 100 derrick for working in the atmosphere at heights over 1,000 feet,” says LaChapelle, “and our winch for that derrick has 70,000-pounds of line pull, so on a single part of line you could take 70,000 pounds.

“It has built-in acceleration/deceleration and level line systems, and an encoder-based proximity system, which means that it uses special little computers to establish its spatial awareness versus micro-switches.” Designed for use in ultra-high-rise rigging, the product was also designed to be used in different configurations, including multi-part TK for bridge construction.

So, fittingly enough, ABLE is in negotiations with a consortium called Bridging North America, related to the building of the largest cable-stayed bridge in North America, from Detroit, Michigan to Windsor, Ontario.

The city that never sleeps
With so much construction taking place in New York, ABLE has no shortage of work, including 270 Park Avenue, which recently required manual dismantling. The headquarters of world-famous investment bank and financial services company JPMorgan Chase, it was a 700-foot tall building erected in the mid-1960s, and the former HQ of Union Carbide Corporation.

Requiring the erection of a Favelle Favco 760 tower crane, ABLE jacked up sections exceeding 700 feet, for a total of 50 sections, and will demolish the building with the tower crane – the largest tower demolition via tower crane ever. While it will take two and a half months to fabricate, install, erect, climb and commission the tower crane, the process of dismantling the building will itself take 12 to 18 months, and ABLE will be involved in that process, jacking the crane down. The new structure will be between 1,200 and 1,300 feet tall.

Having come a long way from its early days of moving printing presses and machine shop equipment, the chance came for ABLE Rigging – and its unique and tested safety procedures and systems – at a time when there was a spate of collapsing tower cranes in Manhattan.

“The city came to us saying they needed a reputable rigger that’s properly insured and has the proper safety standards in place to be able to take over the erection and dismantling of the majority of these tower cranes in New York City,” says LaChapelle. “So in turn we stepped up to the plate, and we’ve put up, taken down, and climbed over more than 150 tower cranes in New York City since 2006.”

A game changer
Recently contracted to take on the next phase of the Hudson Yards project, ABLE expects to be to be pretty busy with that and other large-scale projects into the near future. But for a company aiming to grow the business by 20 to 25 per cent, the company’s work at Central Park Tower at 217 W. 57th Street is a game changer.

“We are hanging our hat on the fact that when we get this machine up on 217 W. 57th St. and it’s sitting up there 1,600 feet in the air and is the highest thing in North America, a lot of people are going to take notice of what we are doing,” says LaChapelle, “and I think we’re going to have a giant need as people come to us – not only to do their jobs in other parts of the world – but to possibly even buy the equipment.” 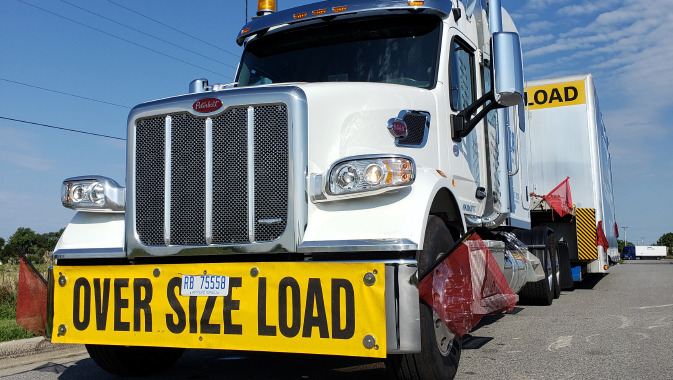 Carrying the Load so Customers Don’t Have To

The Future is Vertical