When the Going Gets Tough, the Tough Go Shopping

A Look at Black Friday and Cyber Monday 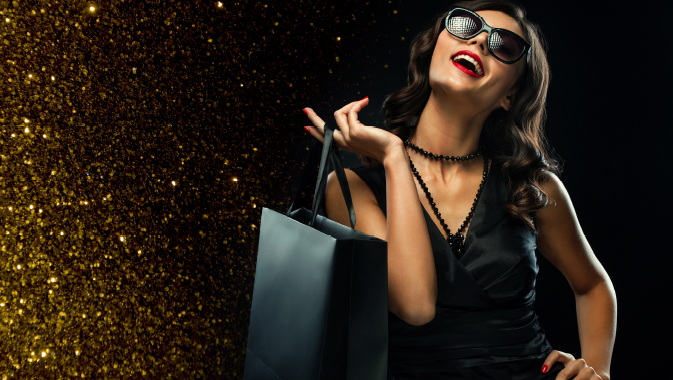 What everyone’s been waiting for is almost here. Well, maybe not every consumer – but certainly every retailer – in store and online alike – has Black Friday circled on their calendars. But because of changes in consumer behaviour, Black Friday is no longer the one-day shopping frenzy it was and now extends for two months, beginning early in November, while Cyber Monday is catching up.

The roots of the sales phenomenon known as Black Friday go back to the 1950s when the Friday following the U.S. Thanksgiving holiday presented itself as the ideal opportunity for retailers to kickstart the holiday shopping season and get their accounts into the black. The retailers, however, didn’t come up with that name; apparently the Philadelphia Police Department did that in the 1960s, in a reference to the massive traffic jams and crowded sidewalks as shoppers into pushed their way into downtown stores, according to Kimberly Amadeo’s article, Why Is Black Friday Called Black Friday?.

Since the 1960s, both the size of the discounts offered on that one day only and the crowds have grown exponentially, at times resulting in violence as shoppers have fought over bargains and parking spaces, and trampled on other shoppers. According to Amadeo, Black Friday violence has resulted in 10 deaths and 111 injuries since 2010, with a disproportionately large number, 57.1 percent, occurring at Walmart.

Retailers have responded to these tragic incidents by increasing the number of discount days, some beginning as early as November 1 and extending them into early January, thereby relieving the frenzied attempts to get a bargain at all costs.

Cyber Monday, which emerged as an alternative to Black Friday in 2005, allows consumers to shop online in the safety and comfort of their own home, with sales increasing steadily every year. The National Retail Federation (NRF), in a press release dated October 3, 2019, indicated that it “expects online and non-store sales to increase between 11 percent and 14 percent, to a total of between $162 billion and $166.9 billion in 2019, up from $146.5 billion in 2018.”

Now instead of focusing on the single “make or break” day, U.S. retailers are focusing on holiday sales over a two-month period. In the same press release, the NRF indicated “it expects holiday retail sales during November and December to increase between 3.8 percent and 4.2 percent over 2018 to a total of between $727.9 billion and $730.7 billion. The numbers, which exclude automobile dealers, gasoline stations and restaurants, compare with an average holiday sales increase of 3.7 percent over the previous five years.” (Note that the figures released from online sales are included in this total and that retail sales have increased steadily over the last 15 years, with the exception of 2008 and 2009 when there was a small decrease.)

Before jumping to judgment that these figures reflect corporate greed, it’s important to note that retail is the nation’s largest private-sector employer, contributing, according to the NRF, $2.6 trillion annually to the GDP and supporting one in four U.S. jobs — which means 42 million working Americans.

“The U.S. economy is continuing to grow, and consumer spending is still the primary engine behind that growth,” NRF President and CEO Matthew Shay said. “Nonetheless, there has clearly been a slowdown brought on by considerable uncertainty around issues including trade, interest rates, global risk factors and political rhetoric. Consumers are in good financial shape and retailers expect a strong holiday season. However, confidence could be eroded by continued deterioration of these and other variables.”

Meanwhile according to the Retail Council of Canada, core retail sales in 2018 stood at $376.9 billion, with 10.8 percent of Canadian workers employed in the retail sector. Canadian retailers were much slower to get into the discount game and didn’t start offering significant Black Friday events until 2008, in a belated attempt to keep shoppers at home. But while Canadian retailers were holding out for Boxing Day (December 26) blow-out sales events, Canadian consumers weren’t having any of it.

In fact, there’s a website, crossbordershopping.ca, “dedicated to helping Canadians shop and save in the U.S.,” which provides links to shopping tour busses departing all along our shared border. Shoppers from British Columbia can head down to Seattle, Washington; those from the prairies can head south to Grand Forks, North Dakota. From Ontario, shoppers can find bargains in Detroit, Michigan, in Buffalo and Niagara Falls in upstate New York or Erie, Pennsylvania. Quebec shoppers can try their luck in Vermont, while New Brunswickers can head over the border to Maine, to Bangor or Kittery, or Portsmouth, New Hampshire.

What consumers are saying
I conducted an admittedly unscientific study of consumer behaviour on Black Friday and Cyber Monday by surveying my 558 Facebook friends. I received a limited number of responses – 31 in total, 28 Canadian and three American. Although far from statistically sound, the responses are insightful as those who answered didn’t just click on a symbol but wrote thoughtful responses.

Of the 31, 19 were not at all enthusiastic about Black Friday sales, including three American friends, one of whom deemed it “a blood sport!” Reasons for the lack of enthusiasm among the other 18 were more measured, some philosophical and some practical. “We are so much a buyer’s community that we end up possessed by our possessions,” wrote Leo C., pointing out that “want and need are two different things.” “I hate going to these types of sales – they bring out the worst in us,” wrote Rachel M., “so I avoid them like the plague, however I admire people who can attend these sales and maintain some sense of sanity.” Lori L. even went so far as to write, “I’m a fan of the counter movement, ‘Buy Nothing Day.”

While that movement is not helpful to retailers hoping to get their bottom line into the black, which in turn drives the economy, it may be instructive to them in terms of changing marketing practices and figuring out what it is that consumers need, because even though 19 said they avoid Black Friday sales events, they still shop and they still look for bargains.

Janice H. commented that she rarely takes in these sales as, “I hate shopping when it is crowded, but if we need something big, like a new TV, I will look at the sales flyers and search online.”

“I think ‘special days’ are gimmicks designed to seduce people into buying things they probably don’t need,” wrote Helena C. “But I did like it when Superstore had a tax-free day. By keeping an eye on the price of things in general, I can find bargains quite readily. Buying from locally-owned stores is a wise thing to do in most cases – service and reliability are important, and that’s usually what you get from locally owned businesses.”

For the friends who cited avoidance of crowded malls and big box stores and the possibility of violence as a reason for not attending Black Friday sales, Cyber Monday is an increasingly appealing alternative. “I am an Amazon and E-bay fanatic,” wrote Angie B.

Liz A. says that she rarely shops online, preferring to shop locally and keep the community alive, but she will get her online shopping-savvy daughter to order speciality items for her that she can’t get here. “There are good prices on Amazon year-round and other stores have sales online,” commented Vicki A. “It’s also nice to shop at home and support local merchants, just not on Black Friday. The stores are now extending Black Friday bargains for days before Black Friday and let the sales continue for days afterward and I appreciate that.”

Diana M. echoed this sentiment. “Last year I got a great deal on my PC on the day before Black Friday at Best Buy. The salesman told me they start early, so it’s not so crazy on Friday.” (Note: Canadian stores will be open on November 28 because Thanksgiving is observed on the second Monday in October.

“I’m mid-way between Black Friday and the green alternative, ‘Buy Nothing Day,’” says Natasha L. “I tend to buy what I would normally buy/need/want and if it’s on sale, so much the better. But if you’ve been wanting to make an important purchase such as electronics, appliances or even clothes, as long as you know your size, online is a good option. Most international brands and even local brands participate. Brands like Best Buy, Michaels, Gap, Amazon and Etsy and many others will offer free shipping and deep discounts.”

Who is going actually going shopping on Black Friday, or maybe the day before? Alex S. is, for one. “I don’t usually consider shopping on that day,” he wrote, “but this year I do need a new computer. Mine is circa 2008 and starting to lag. So, I’ll be looking for a good deal on a new computer at the Black Friday sales.”

It would seem that Black Friday discounts are much better in the U.S. than in Canada and get more people through their doors – including Canadians. So, U.S. retailers, take heart: I do have friends who absolutely love Black Friday and Cyber Monday. Writes Arlene D., “I love Black Friday and have stood in many a line and never left the U.S. disappointed. Now that my family is older, I’m opting to do more things online. It’s still a thrill, although I am choosier in my selections.”

We’re leaving the last word on Black Friday to Jenny D. who goes on bus trips to Maine and New Hampshire with 30 other Canadian women. “The lineups are unreal, and we start at midnight and go all day,” she wrote. “It is a lot of fun and you do get caught up in the game and come home with items you don’t really need. But hey, they are great deals!”

A true customer service experience
On a personal note, I want to share this story about the importance of customer service. I tend to buy clothing when visiting other countries or cities outside my area, so I’ll have more unique items. But early one evening in September, the printed fabric of a tunic top based on a painting by Canadian abstract artist Claire Desjardins caught my eye as I passed Cizza, a Quebec-owned chain I’d never shopped in. I loved it, it was a perfect fit and I wanted it – although I didn’t actually need it. It was priced at $115 and I was prepared to pay that, when the salesclerk asked me if I could come back the next morning, because there was going to be a store-wide 25 percent discount sale. Naturally I wanted to save $33 after taxes and agreed.

Now that salesclerk had a sure sale for full price right in front of her, and I was an unknown customer who might not have returned, so she could have lost the sale entirely. But she wanted to do what was best for me and that in turn was what was best for the store, because I’ll be back – you can bet on it. And I’m telling other people about her, just like I told you. 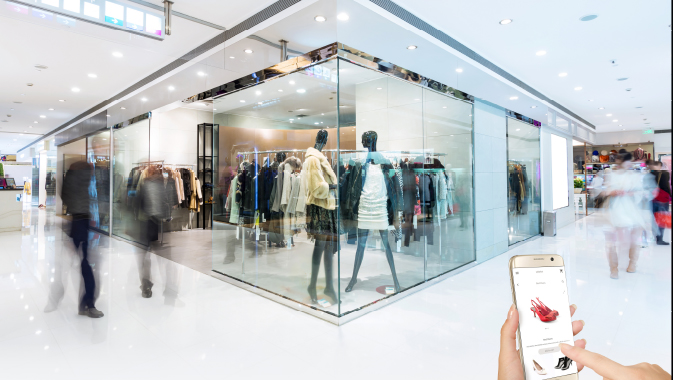 When the Going Gets Tough, the Tough Go Shopping