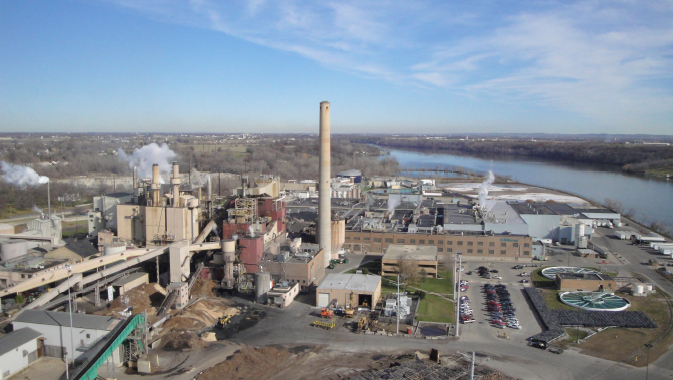 Kaukauna’s location on a two-mile stretch of the Fox River with a fifty-foot drop and significant rapids means that the city can produce its own hydroelectric power and offer its residents as much as thirty-five percent savings on their monthly utility bill. To learn more, Business in Focus spoke with Mayor Tony Penterman, Director of Planning and Community Development Bob Jakel, and Kaukauna Utilities General Manager Jeff Feldt.

This city of 16,000 people takes its name from the Menomonie Indian Tribe’s word Ogaq-Kane, meaning ‘the meeting place of the pike.’ Feldt explained that the town’s “historic industry from the early 1800s was dominated by a paper mill; in fact, all of the Fox River Valley was once dominated by mills.”

Kaukauna’s planning and community development department, meanwhile, is focused on the future, as that history is preserved in a former paper mill. The 88,000-square-foot, stone facility built in 1874, is now on the National Register of Historic Places. The building also houses the public library and provides corporate office space for Ahlstrom-Munksjö, a Scandinavian paper products company which, in 2018, purchased four paper mills in the area, including one in Kaukauna.

Although paper mills continue to play an important role in the economy, a decision was made in the 1970s to diversify economically, resulting in the creation of an industrial park located on U.S. Highway 41 and served by CN Rail.

“In conjunction with the paper mill, we went into machining, tooling, and other heavy industrial services, particularly piping, welding, and metal fabrication, which employs in excess of 5,000 workers,” Jakel told us. “One of the advantages Kaukauna has is that the Local 400 branch of the Pipe Fitters Union is located here, and they provide a lot of training and professional services for the workforce in the area and serve a number of our industries with highly-trained and qualified personnel.”

Now Kaukauna is set to diversify its economy again with Commerce Crossing business park, sixty-five acres of property adjoining U.S. Highway 41 and State Highway 55. Its lots are shovel-ready with roads and infrastructure – electric, gas, water, sewer, storm sewer, and high-speed cable – ready for use. Surrounding it are twelve acres of public park space and a further twenty-six acres designated as a natural area, which includes ponds. Within one mile of it are ninety-two new city building lots.

While the population of Kaukauna is relatively small, businesses choosing to locate in Commerce Crossing are within reach of over half a million potential clients within twenty-five miles. This number includes the 186,720 people residing in the Green Bay Metropolitan Statistical Area, which is just twelve miles away and gives employers a sizeable workforce from which to draw.

Already under construction at Commerce Crossing is the 72,000-square-foot Aurora BayCare Health Clinic which will provide twenty-four-hour emergency services, a dental clinic, and other medical services. For business tenants, there are also two Class A office buildings, equipped with all of the amenities including high-speed Internet access and attractive facades approved by the planning commission. There is also space for additional office buildings of the same type.

But the real ace the planning and community development department has tucked up its sleeve is Kaukauna Utilities, which provides electricity to residents and businesses at extremely favorable rates. “It’s very important to us and part of our incentive package for businesses and industries locating here,” says Jakel.

Kaukauna, Feldt added, is one of eighty-one municipalities in Wisconsin that own a utility company, but unlike those that have to purchase their power, Kaukauna creates its own power by hydroelectric generation from the same rapids on the Fox River that once powered its mills.

“We have a long, rich history of hydro power on the Fox River, which flows south to north, not something many rivers do,” he says. “The lower Fox starts at Lake Winnebago, and in a thirty-five-mile stretch, there’s a 168-foot drop before it ends at Green Bay. Within the boundaries of Kaukauna, there’s a fifty-foot drop in a two-mile stretch, and we’ve taken advantage of that going back to the mid-1800s when navigation canals were put in place.”

There are now seven hydroelectric plants, with the oldest having been in operation since 1909 and the newest coming online in 2014. Together, they produce thirty to forty percent of the total electrical requirements of the fifty-square-mile service territory and employ fifty-seven electricians, linesmen, and other technicians.

Kaukauna Utilities has joined with other Wisconsin municipalities to buy power in bulk according to scale. “Some of our additional power comes from nuclear, some from coal-fired generators, and some natural gas, but a significant amount comes from wind farms in Illinois and from a solar facility on the eastern side of the state. Some of those large-scale projects boost our renewable green energy portfolio even higher than fifty percent,” Feldt says.

“We in Kaukauna have some of the lowest utility rates in the U.S., and that is due in part to our hydro power. We can produce it at considerably less cost than we can buy it, so our customers benefit, and I like to think it’s an economic draw,” he shares.

“Residential customers pay thirty-five percent less than the national average, and for industrial clients, it’s a little bit higher, and it’s all due to our clean and renewable energy because fifty percent of it can be considered clean energy. It’s an effect that might go unnoticed, but we put the profit back into the infrastructure to ensure the benefit is there for our customers.”

Jakel mentions the relevance of the property assessed clean energy (PACE) program. “What it does is allow commercial facilities to receive a loan to pay for certain energy efficiency improvements on their properties and pay it back over time at a very reasonable rate. It’s about the economy of scale. If we can project that a company could save $300 a month on their energy bill – electric, gas, water – then whatever they save is what we could try to get as a payback.”

Once the loan is paid out with two percent interest, it’s just pure savings for them,” he continues. “We have downtown businesses with old infrastructure that needed to be bought up to standard with energy efficiency, and their savings were significant because they didn’t have to make big upfront payments.”

Moreover, he says, should a business relocate in Kaukauna, it would be eligible for a below-market pricing tariff that would allow it to get further savings over the first four years of operation, further reducing the power rate. This is something of which larger industrial or commercial customers will want to take advantage. Residential, commercial, and industrial customers may also realize further savings through the state’s Focus on Energy Efficiency program.

Feldt has racked up thirty-five years of experience working for utility companies in southern Wisconsin and Michigan and has been managing Kaukauna Utilities since 2002. “Our focus is what’s best for our customers,” he says. “Being a municipally-owned facility allows us to do it. We operate in the best interests of the customer and for the long-time viability of our organization, so it can continue to improve the life of our residents.”

So, what is life like for Kaukauna’s residents? Jakel lists the benefits of a four-season climate that allows for all manner of outdoor activities including fishing for walleye in Green Bay and Lake Winnebago or walking on the soon-to-be-completed boardwalk across the Fox River. When finished, this will be the longest boardwalk over a river in Wisconsin. There are great schools and sixteen colleges and universities within a twenty-mile radius; a reasonably priced housing market with a typical price range of $185,000 to $500,000; a thriving downtown with a new sixty-room hotel and a performing arts center; and for football fans, a mere twelve-mile drive to Lambeau Field, home of the Green Bay Packers.

“Plus, we have police, fire, and emergency services that operate 24-7,” adds Mayor Penterman. Kaukauna, he says, is a place that has it all. It has managed to maintain its small-town atmosphere where people still get excited when Dick’s Drive-in Restaurant reopens for the summer season, as it has done since1955. And they like to visit the Hilltop Bakery which has served customers since 1923. At the same time, Kaukauna is rapidly expanding, and there is a definite feeling of excitement in the air, he says, extending an invitation to business developers to come and check it out.