Starting a business is not an easy decision. It is fraught with uncertainty about whether products and services have a market and what that market size might be. But what ultimately matters is that the right decision has been made. There are no regrets.

There are no regrets for Mark Hagedorn, Director and Manager of A/T Transportation LLC, formerly known as Automated Transportation LLC, who established his family-owned-and-operated trucking company in 2006. This general freight carrier has a corporate office and a new warehouse located in Ferdinand, Indiana.

Being a driver himself for approximately fifteen years and working for a prominent furniture manufacturer in their office and logistics department for an additional fifteen years has given Mark extensive knowledge of the trucking industry. He also realizes some of the challenges in the industry, particularly as they pertain to drivers.

This was the motivation to start his own company. He wants to acknowledge that truck drivers are a driving force in the American economy. They deserve to be recognized, supported, and respected for the many sacrifices they and their families make every day to ensure consumers have products delivered on-time and safely.

John Echelbarger, Public Relations Manager, says that it has been Mark’s dream to establish the company from a strong position and to “learn all of the intricacies of the industry from dispatch to safety and still have that driver’s perspective. I think that helped Mark to build this place.”

What began with three trucks and five trailers, has grown to one hundred employees; about forty owner-operators; as well as a fleet of approximately eighty-five, late model trucks and 215 trailers. The company serves all of the continental United States.

John says that A/T’s location in Indiana is ideal. “I think that puts us in a really good spot here in the Midwest, where we’re able to reach a heavy proportion of the population in a fairly short drive.” Being situated in the southern state works to the company’s advantage since the region is, “known for wood manufacturing, office furniture, and cabinets. That’s really a big part of our customer base.”

“This area has a strong German heritage, which are craftsmen by trade and farmers,” Mark adds. “A lot of the furniture manufacturers started a long, long time ago.” Most of the prominent furniture manufacturing industries are within a fifty-mile to seventy-mile radius of the company’s headquarters.

When Mark established the company, he also started a brokerage division called Automated Logistics at the same time. This division “has been designed to assist with our asset side. But in the past few years, we’ve grown that more and more. This year, it’s grown quite a bit. We have seventy-eight percent growth so far this year. We’re expanding that and going into servicing more markets,” he says.

“There was a need for more than I could handle with the equipment I had. So brokerage was just another way to assist our customers and help them out with their needs for transportation,” he adds.

He also saw a need for the company’s newly purchased warehouse. “A lot of the manufacturers do government contracts. So they have to produce that furniture [in advance].” Half of the A/T warehouse is now leased and is one of the ways the company is, “just branching out to help our customers with the needs that they have and assist them in any way that we can.”

The company also provides a full-service, fully equipped maintenance shop. Berg’s Big Truck Shop was established in 2012, with a staff of five seasoned mechanics and a service truck available any time. This maintenance facility services the company’s fleet of trucks as well as outside work on heavy equipment such as farm machinery, dump trucks, and tractor trailers.

The company has several long-time furniture manufacturing customers, which include Master Brand Cabinets Incorporated. “The largest kitchen and cabinet manufacturers in the United States,” says Mark of the company. “Their biggest plant is only three miles away from our terminal. They’ve been customers with us since the beginning.”

“We’re looking for safe drivers. That’s our aim, number one. We want to put somebody out on the road that we know is looking out for other people,” John explains. “We’re all out there sharing the road together.”

He adds that the company wants an assurance that all drivers have a good past employment history. “We want to make sure that they service our customers well because we are a specialized carrier for Master Brand. I think all those different tangibles go into the person that we’re looking for.” A/T seeks drivers who are dedicated to “being a part of our culture.”

A/T has an open door policy, and drivers are always welcomed into the office to discuss any concerns or just talk about their families. Drivers and their families are taken to Holiday World in Santa Claus, Indiana every fall, and the company’s driver appreciation week is another part of this established culture. “We do a lot of things that really show that A/T is a family,” says John. These events are not only for company drivers but also for the subcontractors who are “made to feel like they’re a company driver.”

Mark adds that A/T management is comprised of several ex-drivers, many of whom still hold a commercial driver’s license, as he does. “It’s not uncommon for me, every couple of weeks, to be in a truck doing something.” Even some of the office personnel will do shorter truck runs if need be. “Our office personnel loves to get out and make deliveries when need be.”

A/T believes that safety is an important consideration in how the company operates. “We always have been very safety conscious,” John says. The company employs PeopleNet, a software service for fleet management, and event recorders for a better proactive approach toward safety. One of the safety measures to protect drivers and the company is, “forward-facing and driver facing cameras in our trucks,” says Mark.

A/T has one of the best safety scores in the industry. “We pride ourselves on that. It’s the team I’ve assembled to work for this company that deserves the real credit for where we are today,” Mark says.

“Being a safe company can make you a profitable company too because there are a lot of savings that come along with safety in trucking,” Mark adds. “It’s good for your business with your customers and everyone else.”

“We’re constantly trying to get better,” adds John. “It’s not about the status quo.”

Customers also have access to the company’s PeopleNet to track their deliveries. Using such technology ensures that drivers, “are not sitting around waiting to know what their next load is or what they’re going to be doing next,” says Mark.

“When you’re running paper, it was always a struggle to get the driver to leave on time. E-Logs (electronic logging devices) are something that we’ve been trying to do for years. I’ve always seen it as being a big benefit in the industry. It’s been a long time coming, and we’re finally glad it’s here where everybody is on the same page.” A/T implemented the use of e-logs, “long before the mandate even came into effect.”

“We set [drivers] up to be successful,” John adds. “We give them plenty of time to get where they need to go. We’re always competing for the Master Brand carrier of the year, which we were fortunate to win in 2016 and 2017.”

A/T has been paying premiums into its captive insurance company for over four years, and there are fifty-four trucking companies in the captive, according to Mark. Once eight hundred or more points are accumulated, the president’s award is achieved. “We received that award three years in a row.” All companies in the captive category “are all safe and well-run companies. It’s a pretty prestigious award.”

The company has been affiliated with the SmartWay program for five years. “Fuel economy is your second biggest expense in a trucking company,” Mark notes. “With SmartWay, the tools that they have and the relationship we have with them have made us a better and more fuel-efficient and greener company. So there are big benefits in that.”

Both Mark and John agree that the biggest challenge in the industry is the driver shortage. To address this shortage, the Drive-Safe Act was introduced into the House of Representatives and the Senate this year. This act would lower the minimum driver age from twenty-one to eighteen.

“A lot of companies are having to sacrifice their standards,” says John. “At the end of the day, the one thing we stay very steadfast on is [that] we’re going to put the right person in the truck. They’re going to have to meet safety standards and qualifications to be able to drive for us. Our industry needs to realize what drivers have to experience at times to get goods to them promptly.”

Mark affirms that the industry has to be made more accountable so that drivers are not faced with their current challenges. Drivers should not be expected to wait half a day, for example, to get a load on a truck. For “ninety-nine percent of drivers out there, their goal is to get home,” he says.

“It’s not about how big we want to be. We want to be the best at what we have. We want to have the best, safest, most on-time delivery company out there. That’s what I strive for,” says Mark of his vision for the company. 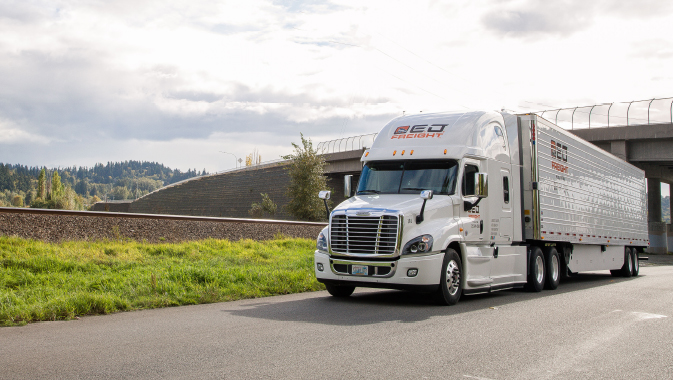