Wood By-Products – The Way Forward for a Sustainable Future 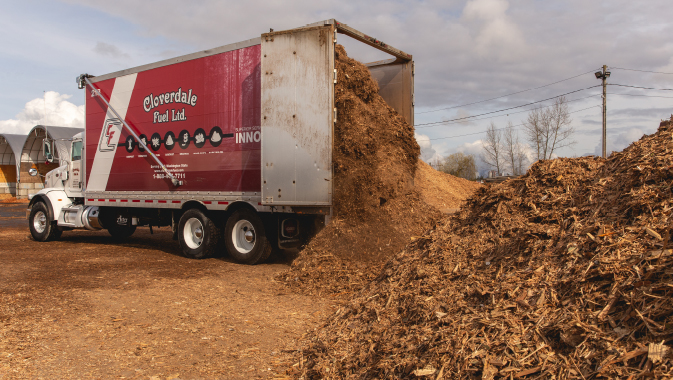 Cloverdale Fuel is the largest licensed wood-waste processor in southwest British Columbia and works with wood products in every way, including disposal, transport, and sales. It maintains a fleet of thirty-five trucks and trailers to convey wood waste and pick up finished product throughout the lower mainland and Washington State. We spoke with its General Manager Robby Gill, grandson of the company’s founder.

Cloverdale Fuel was incorporated in 1945 by J.D.S. Gill with only one truck and a mill contract. Back then, burning wood and sawdust would help to cook food, heat the house, and provide energy for the home.

“This was commonplace as it was in an era that predated cheap hydro and natural gas. That took place through World War II and proceeded for a few more years, but as hydro and natural gas became more available, a lot of customers from that side of the business started to go away,” says Robby.

The next phase of the business served the agriculture and pulp and paper sectors. As more mills made pulp and paper, Cloverdale was contracted to truck raw and finished materials for lumber mills. Some of the sawdust, shavings, and ‘hog fuel’ were sold to farmers to amend soil or as livestock bedding. Hog fuel is mixed waste material from wood processing.

This was the main market for Cloverdale Fuel from the fifties through the eighties. The company had seventy to eighty dairy farm customers in Washington State alone. “That was our bread and butter. We had a fleet of small trucks that would pick up sawdust and shavings to deliver across the line to these farms, and we did that for quite a long time as well as having servicing plants here,” says Robby.

Cloverdale’s business included transporting, repurposing, handling and sorting wood waste. This could be anything from virgin trees, to a 2×4 or other wood waste from home construction. It was sorted, purposed, and sent out to different customers.

In the eighties, some farms started using biomass like wood waste as a form of energy. A boiler would provide hot water to heat greenhouses, and this became a new sector for the business. “From the early eighties through the nineties and the first few years of the 2000s, a good number of greenhouses came on line, and it was much more energy efficient and a cheaper way of heating a greenhouse, other than natural gas and that was the next wave,” says Robby.

During that time, wood waste was plentiful and came from manufacturing mills and plants, but that source started to decrease due to closures. Cloverdale dealt with at least nine independent sawmills directly on the lower mainland of B.C. and more in Washington State, but now only two or three remain. As the mills shut down, diversification was in order. Its business plan has gone through various changes but some things remain constant. The company has always been vertically integrated and always seeks new business opportunities.

There used to be a glut of wood waste available in B.C., particularly in the lower mainland, but that has gone due to higher land prices for sawmills and wood manufacturing plants. The consolidation of the industry has also eradicated many of these saw mills, so Cloverdale has switched to different streams of wood waste.

“We do a lot of urban mining wood waste. People put up a house, take down a fence, or build a new condo development, and we are there,” says Robby. The company collects from three hundred bins around the lower mainland, which are then sorted at its facility in Port Kells and sent to different markets to be re-purposed.

When I spoke to Robby, he told me about a piece of business undertaken just today that illustrates the vertical integration of the company. “There was a guy that was taking down an old fence and was doing some landscaping on his property. He wanted some bark mulch, so I sent in the bin with some. We dropped off the bin so he could load it with wood waste and brought that wood waste back to the court yard. We are truly vertically integrated,” he explains.

This is a contract transportation firm and hauls other materials besides waste wood products. In its trailers one can find anything from straight waste to plastic, palletized freight, grain, feed, or manure. The company also has steel end-dump bins to pick up concrete, waste steel, and heavy material. These bins can be fed from an excavator and treated rougher than aluminum trailers.

“We have operations in the U.S. with employees in a yard. It is called Darman Recycling U.S.A. We do much the same as we do up in B.C., but on a smaller scale. We have a bunch of mills who we pick up from, stockpile, and process waste down there as well. Our U.S. division is just north of Bellingham, Washington,” says Robby.

The next phase of operations for Cloverdale will be in serving district energy projects. It already provides the University of British Columbia (UBC) with up to twenty-five percent of its heat and power through recyclable waste.

Another foray in diversification for Cloverdale Fuel is in land purchasing and developing since it conveniently already owns excavators, loaders, and trucks. It has been looking for opportunities, mainly in the lower mainland in Washington State, to buy, update, renovate, or repurpose industrial or commercial buildings or property.

“In Port Kells, the Langley/Surrey area, we have about 100,000 square feet that are either rented or leased of industrial space. We also have various acres or parcels throughout Langley City and other parts of Surrey and Bellingham that are in the process of being developed and identifying them as the next projects for us to do,” says Robby.

This will not be a big part of the company going forward. Jasmine Real Assets is a family endeavour that will use some of the services of Cloverdale Fuels and have a common ownership but will retain its status as a separate entity.

Diversification is something that Cloverdale Fuel knows well. “There may be things thrown at you which can create a bit of disruption, but it also creates opportunity. We have customers now that I dare thought we would have ten years ago,” says Robby.

The company supplies custom fuel for industrial plants throughout the lower mainland, and it was not even looking at this fuel five to ten years ago due to the implementation of the carbon tax. If you told Robby then that he would be delivering wood fuel to UBC, he would have thought you are nuts! But that is exactly what it does.

The company is a big believer in supporting local communities and funds several charities such as the Cloverdale Rodeo and The Ride to Conquer Cancer. The most notable is Langley Hospital. Robby’s dad has nine brothers and sisters, and he has twenty first cousins. Eighty percent of them were born in that hospital.

“Our family uses that hospital quite extensively. I live close to it, and we have chosen to get behind and support the Langley Hospital in a big way. This one place more than any other is where our focus lies. Langley has been growing at an exponential rate over the last three years, and it has not been able to support the population growth in the municipality,” says Robby

Robby and his family want to ensure that Langley is well positioned to take care of the people in the city and the surrounding township. It is a great place to live, and Robby’s family has been here since his grandfather came here in the late forties.

And the company has plans to stay. “A lot of the district energy stuff will emerge and become more prevalent. We see an opportunity to expand and update our operations. We are always buying more equipment, more trucks, and hiring more people. Canada is a great place to live and do business.”

Wood By-Products – The Way Forward for a Sustainable Future