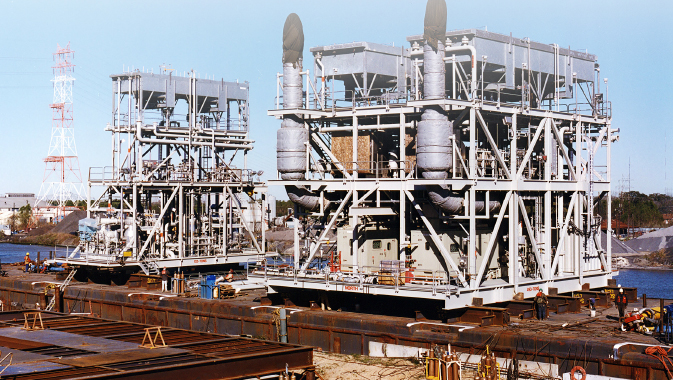 It is always a pleasure to come across a company that is the expert in regard to its field’s best practices and standards. Petrotech Inc., a specialist in the latest industrial instrumentation and controls technology, is just such a company.
~
Headquartered in New Orleans, Louisiana, Petrotech, Inc. has controlled, protected, and serviced large turbomachinery like turbines and compressors for the world’s energy giants for over forty years.

“We wrote the book on controls retrofit; our write-up on the subject is used in the ‘Process Engineering Equipment Handbook,’ published as a reference for design engineers by McGraw-Hill,” says President and Chief Executive Officer John A. Kazour.

Petrotech Inc. extends the lifespan of costly equipment by adding sensory systems and automation capabilities that would typically only be available on newer models. The company then integrates these retrofitted machines into plants’ more modern automation processes. This means better functionality, reliability and lower operating costs for clients’ power generation compressors and turbines.

For energy and industrial operators that favor system quality and reliability and consider it important to control the cost of equipment throughout its complete lifecycle, Petrotech’s systems are the answer. From facilities in New Orleans, Louisiana, Houston, Texas, and the United Kingdom it serves clients throughout the world in oil & gas production, refining, processing, pipeline, and the power generation sectors; it serves some of the biggest gas turbine and compressor fleets worldwide.

Fleet owners usually contract the company to supply controls for their turbomachinery to keep them running safely. Turbomachinery is a term for machines like compressors and turbines – gas, steam, or hydro powered – that transfer energy between a fluid and a rotor.

“We have systems in the deserts of the Middle East, the North Sea, the South China Sea, the deep waters of the Gulf of Mexico, and the Arctic Circle in Alaska. Our expertise in delivering in these challenging environments is best in class,” says John.

The company has a vast amount of repeat business. “Our people are empowered to do whatever it takes to make the customer very happy. Once we win a customer, we never lose them,” John adds. The company performs in-depth studies of how each plant operates before commencing any type of work. This allows time for sufficient planning as retrofitting a running plant is decidedly more complex compared to working on newer plants.

Minimizing downtime is key to ensuring that clients do not lose productivity or profits. “Many of our competition see their role as delivering a controller for a machine; however clients’ needs are the more difficult part of implementing partial upgrades,” says John. The company always meets its shutdown schedules.

Petrotech employs a full complement of chemical, electrical, and mechanical engineers, allowing it to design and plan each retrofit with great attention to detail. The company does not simply cut and paste elements into an existing system.

Its electrical and instrumentation technicians and engineers can complete partial automation site-work and upgrades within narrow time frames. Timing and efficiency are what sets a successful project apart, and sticking to the schedule forms the foundation of its delivery policy. “This specialty is often overlooked by some competitors who assume the site installation and commissioning is something that can be subcontracted and is too expensive to maintain in-house,” John says.

The company is especially favored for its skill in retrofitting plants where only partial shutdowns can be done, and installations must be conducted within very short periods. “The ability to foresee and provide for systems’ interconnection is far more difficult than the subsystems you are replacing. The last thing you want [to discover] during the shutdown period is common systems that do not have the ability to interface to your new system and depend on your system to run the plant,” says John.

Petrotech’s more than four decades of experience allows it to explore ever larger goals in terms of the functionality and intuitive design of its systems. These systems improve user interfaces, simplify diagnostics and ease of operation and are compatible with the control specifications of multiple turbine manufacturers.

The company’s research and development department has also improved on several turbine and compressor control system designs, making significant contributions to their technological advancements. All concepts are thoroughly tested before being released.

Remaining technologically current is part of its commitment to excellence. When it comes to the application software behind its control platforms, the company’s team of software application developers is best in class. “Our gas turbine control algorithms are second to none in our industry with zero faults after forty years,” says John.

“Our goal is to always be the best in turbine and compressor control [application software]; to do this you have to also do all associated services extremely well,” says John, adding that the company is unparalleled, “when it comes to rotating equipment controls, and everything we do goes towards furthering this cause.”

Its service includes well-informed sales and applications people to diagnose or guide clients through selection decisions. John believes that it is wise to learn how to make every customer happy. The company even has an employee measurement and incentive system that compares performance against budget, schedule, quality, and customer satisfaction, and staff members are then rewarded accordingly.

And it has reaped the benefits of this system, enjoying strong and stable growth for many decades. It has also won the ‘North American Turbomachinery Control Systems Integrators Excellence in Customer Value’ award, a Frost & Sullivan Best Practices Award.

Petrotech, Inc. has been around since 1978 when it made turbomachinery controllers for the oil & gas and power generation industry. “It was started by engineers and continues to be run by engineers. I tell everyone we are much better at engineering than marketing. [That’s why] clients [who] know us, never leave us, while the client next door may not have heard of us,” says John.

Petrotech Inc. supported existing pneumatic compressor controls in the market, before establishing its own microprocessor based compressor control product line in the early 80s. Acquisitions followed, increasing its knowledge base from just compressors to include turbines and reciprocating engine automation. It then established itself in the European market, to serve its Middle Eastern and South East Asia markets better, thanks to less difference in time zones.

Recently, the company completed a turbine project comprised of four large power generating units. As with similar installations, the most important aspect was that the machinery should interface with the customer’s existing technology. It also had to comply with – and generate reports as proof of its compliance – with the Dry Low emissions standards. The system had to offer easy-access from remote locations, which, in turn, demanded cybersecurity protection. “All hard work paid [off], and systems started as expected with a high level of customer satisfaction,” says John.

Of the most impressive challenges that the company has taken on in recent years was creating an application for a hydroelectric power company that was looking to generate power from over a dozen dams on two rivers with over thirty power generation turbines. Some of the greatest difficulties on this project were, as always, cybersecurity, but also the unattended dams and managing the rivers’ flow. Thanks to Petrotech’s ingenuity, it managed to find the perfect solutions, achieving a fantastic outcome that met all intents.

John looks forward to expanding the Petrotech’s services by combining the latest technology with its ever-increasing expertise to remain relevant in this demanding market.

Providing Valuable Savings to Families with Solar and Energy Efficiency