City of Nanaimo, BC 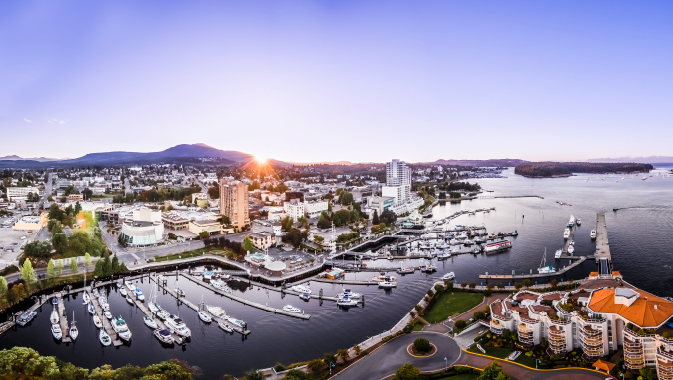 As Canada’s primary Pacific port and largest West Coast city, Vancouver hardly requires an introduction. But just thirty-three nautical miles away on Vancouver Island, the city of Nanaimo, British Columbia blends natural splendour with cutting-edge technologies and emerging business opportunities, creating a unique mix of old and new close to Vancouver’s bustling metropolis.
~
The area that would become Nanaimo was the ancestral home of the Snuneymuxw First Nation. It attracted the attention of the Hudson’s Bay Company when coal was discovered. Mining facilities and a Royal Navy coaling station quickly sprang up, and the company erected a bastion fortress in 1853, now a restored historic landmark. Mining and forestry provided industry for subsequent decades, but Nanaimo has been undergoing major revitalization over the past four decades, and economic diversification is creating a vibrant service-based knowledge economy.

Today, Nanaimo is the fifth largest urban centre in British Columbia, growing by eight percent in the last census – significantly ahead of 5.6 percent growth in Vancouver and 5 percent in Canada nationwide. Nanaimo now hosts students from over ninety countries and a highly diverse cultural city centre, with the recently inaugurated Vancouver Island University (or VIU) opening its doors in 2008. Deborah Saucier, president of Edmonton’s MacEwan University, recently announced she had accepted a new role as VIU’s president and vice-chancellor, further cementing the campus’s status and reputation.

One of Nanaimo’s chief attractions is its natural beauty, according to recently inaugurated mayor Leonard Krog. He was a former Member of the Legislative Assembly (MLA) for British Columbia for eighteen years and was elected to his new post in October 2018. “People who come to Nanaimo for the first time look at it and go, ‘Oh my goodness,’” he remarks, pointing out Nanaimo’s mountains, numerous parks, and nature preserves.

Nearby Mount Washington receives British Columbia’s highest snowfall, bringing snow sports enthusiasts from around the world. The waters around Nanaimo are also highly prized by scuba divers, with scuba pioneer Jacques Cousteau allegedly calling them “the best temperate water diving in the world.”

In addition to his duties as mayor, Krog also serves as one of nine Nanaimo city councillors, six of whom have recently been elected, and takes pride in the council’s close involvement with the Greater Nanaimo Chamber of Commerce and business community. One of the council’s central goals is to encourage business growth and sustainable building and business practices. Krog highlights Nanaimo’s comparatively low business taxes, which he says are lower than those in Kamloops, Prince George, and other similar-sized communities, as a strong growth incentive. He is particularly proud of Nanaimo’s technology sector, citing the recent acquisition of a Nanaimo firm, Inuktun, by a large Quebec-based company. To Krog, Inuktun and other Nanaimo-based companies are living proof that “we do have the talent and business acumen that’s important.”

Business retention is also one of the council’s central goals. In recent decades, Nanaimo’s downtown area had tragically declined, with rundown buildings and shuttered businesses. So Nanaimo sparked a rebirth by building the Vancouver Island Conference Centre, with trade show floor space capable of hosting up to 1,300 attendees. A major transformation of the downtown core followed, bringing in new businesses and economic prosperity.

A new Courtyard by Marriott hotel with 172 rooms is currently under construction adjacent to the conference centre. The council has also provided tax incentives on home building initiatives and streamlined the development permit process, allowing new homes and businesses to meet residents needs more expediently.

Nanaimo is closer than ever to mainland British Columbia through its newly expanded airport that Krog proudly proclaims as the “gateway to Vancouver Island.” The airport has seen a dramatic expansion with 118 percent passenger growth since 2010, and accommodated 435,000 travellers in 2018. Supporting over 2,000 direct and indirect jobs, the airport has now begun a $15 million expansion program to better serve the Nanaimo area.

In addition to the airport, Nanaimo’s commercial port provides import and export capacity for all of Vancouver Island. With four deep-water berths and 88 acres of storage space, the port moved 5.3 metric tonnes of cargo and 6.1 million passengers last year. A $19 million Vehicle Processing Centre is currently under construction, and upon completion will ship imported cars to dealerships all across Western Canada.

Apart from providing economic growth and alleviating these concerns, one of the city council’s other main goals focus on environmental sustainability, which it hopes to attain through a recently launched climate change resiliency strategy. “We are certainly seeing the results of climate change here in Nanaimo, like every other community,” Krog says. The city received a sizeable grant from the Federation of Canadian Municipalities in 2017, empowering the city to identify and assess risks from potential climate change. Nanaimo is also drafting new building codes to comply with the new BC Step Code, a voluntary provincial program designed to raise building standards by setting energy efficiency targets rather than implementing requirements.

Nanaimo is also a member of Green Fleets BC, a program introducing electric and zero-emission vehicles to communities and companies across the province. The city has also diverted rivers to preserve salmon habitats, added 255 hectares to its park system, and implemented new development requirements to catch rainwater. These measures, requiring new buildings to retain the first thirty-one millimetres of rainfall, help reduce erosion and runoff. However, even with these measures, Krog believes Nanaimo is not finished. “Can we do more? Yes. Will we do more? Yes. But we’re doing a pretty good job already.”

Yet despite this growth and sustainability, Nanaimo is also working to overcome the challenges of any growing town. Homelessness, a growing problem in British Columbia, is rising in Nanaimo, but Mayor Krog notes that the city council is working with provincial authorities to build new supportive housing and low-cost housing to mitigate this. “Our housing is relatively cheap compared to many communities,” he remarks, and the development community is working hard to solve the problem. An additional problem, also recent in British Columbia, is drug abuse. “We are a port city,” the mayor states frankly, “and anyone who’s familiar with drug consumption and drug issues knows that any port city faces greater problems than interior cities. That’s always been historically the case.”

He says that Nanaimo is no more affected than any other port community, and that the community is addressing the issue head-on through increased policing by the RCMP and the efforts of a wide range of non-profit groups dedicated to helping addicts and those afflicted. British Columbia has also embarked on new provincial programs, building supportive housing units to get addicts off the streets. “It is an issue,” Krog admits, “but I think we’re dealing with it much better now than we were a year or two ago, particularly because of the assistance by the province with housing.”

With new developments to its natural splendour, Nanaimo’s future looks bright, with an estimated 2.2 percent growth predicted annually over the next five years. “Everyone in town understands that our job is to ensure that growth is in the best interests of the citizens who are here, that it’s respectful of the environment, and that we maintain the liveability of our city.”

Nanaimo is working to continue to provide amenities and increase the high standard of living its citizens enjoy. While the city has grown sustainably, Mayor Krog lays out his office’s objectives to continue this development into new areas. “We need transit that works; we need neighbourhoods that function; we need nodes people can walk to and attain their services and goods,” he says, elaborating that these measures will expand on Nanaimo’s already capacious infrastructure. The city is currently working on a fast ferry connecting Nanaimo and Vancouver, greatly increasing access to Nanaimo’s businesses and Vancouver’s specialized services.

“Overall, it’s a really exciting time for Nanaimo,” Krog says, stating that the recent election was “turning a page.” More Vancouver residents have discovered Nanaimo’s charms and possibilities, and his enthusiasm about Nanaimo and its growth is infectious. “You expect the mayor of any community to be a booster; it’s part of your job,” Krog admits. “But I must say, speaking as the mayor of this community, it’s a heck of a lot easier to say it when you know it to be the truth.” 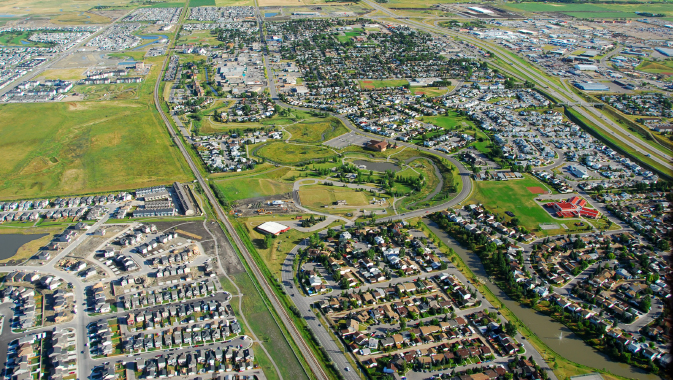