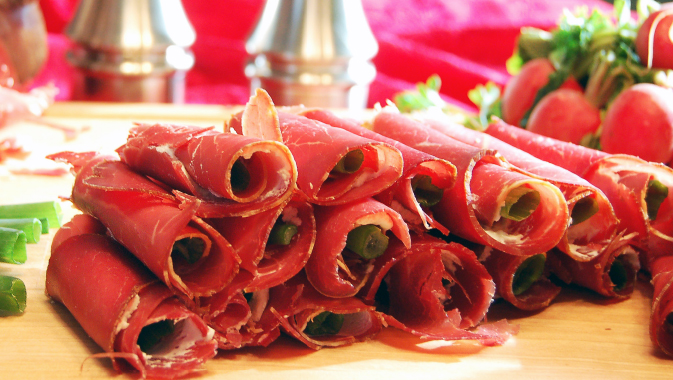 If you were to ask what is new at Knauss Dried Beef in Quakertown, Pennsylvania, you might hear conflicting answers. On the one hand, nothing of the authentic process that Knauss uses to produce North America’s leading brand of dried beef has changed in 117 years. On the other hand, a lot has changed as Knauss is on top of consumer trends and proud to introduce P.J.’s Beef Medallions line of salty snacks, to offer a ready-to-eat version of its classic creamed chipped beef in a microwaveable pouch, and to inspire hosts to create hors-d’oeuvres that will have party guests asking for more.
~
In Quakertown, Pennsylvania in 1902, Edward W. Knauss first sold bacon, ham, hot dogs, and dried beef, created from a Pennsylvania Dutch-style, original family recipe. While creating a quality product that people liked, it is unlikely that he dreamed his humble business would become America’s leading producer of dried beef.

Knauss’ dried beef became so popular that production moved to a 27,000-square-foot USDA-inspected facility on Broad Street in the heart of Quakertown. And it is here today that beef is still dried, cured, and smoked in old-fashioned brick ovens.

“So really not much has changed,” says Chief Executive Officer Robert Longacre. Ten years ago, he brought his 27 years of experience in the meat industry to Knauss when he joined the company which employs approximately 60 people, including some seasonal workers.

True, the meticulous care that goes into preparing the meat has not changed and neither has the traditional recipe for creamed chipped beef which first appeared in the U.S. Army Manual for Cooks in 1911. But now there is an exciting new product: P. J.’s Beef Medallions, which takes its name from owner Paul J. Kozloff.

Mr. Kozloff, who has been an entrepreneur most of his life, is a seasoned executive with many years of experience in distribution and manufacturing. He wishes to continue to grow the business and introduce more innovative offerings.

“They’re beef snacks; it’s a jerky-like product,” Longacre explained, “but it’s much more tender than the typical beef jerky. We have three flavors: cracked pepper, teriyaki, and original, but the most unique part is its tenderness. We have a seven-day cook process, so that means the meat is slow cooked for tenderness, whereas typical beef jerky is cooked faster making it hard and chewy. So, it’s our seven-day slow-roasting, slow-drying process that makes the product tender.”

He says it can be enjoyed as a salty snack, “but people are putting it on pizza and on salads. There’re multiple uses for it because it’s so tender. It’s ready to eat; it doesn’t need refrigeration, and it’s shelf stable.”

Because of those qualities and because it is a low-fat, high-quality protein, this is an ideal product to tuck into a backpack when enjoying the outdoors, and it will last a long time without refrigeration. Health-conscious meat lovers can feel comfortable about eating it. “It’s 98 percent fat-free, gluten free, and there’s no MSG,” he says. There are also no fillers.

“We want our product to be very lean,” he says, explaining that most of the company’s beef is imported from Australia, New Zealand, Uruguay, Costa Rica and Nicaragua where cattle are grass-fed, which results in leaner meat than grain-fed animals. Any fat that is present is carefully hand-trimmed before the curing process begins.

“We feel it’s a top-quality product, which took close to a year to develop and get just right. Everyone loves it, and we don’t have anybody who tries it who doesn’t,” he says. This coming May, the National Sales Manager, Steven Ross, and Marketing Manager, Samantha Alderfer, will attend the National Restaurant Show in Chicago, where thousands more will have an opportunity to try P. J.’s Beef Medallions.

Meanwhile, the popularity of Knauss’ traditional foods like Knauss’s Authentic Air-Dried Beef remains constant. This is made with 100 percent pure beef product that is trimmed to attain 98 percent leanness before being cured and dried in the smokehouses. It can be used in dips, hors-d’oeuvres, casseroles, sandwiches, and of course, the traditional creamed chipped beef over toast.

While it is simple to make and only requires a little butter, milk, and flour, Knauss has made it even easier for people on-the-go, by placing creamed chipped beef in ten-ounce microwaveable pouches that do not require refrigeration. With 150 calories per half-cup serving, six grams of protein and only seventeen percent of the recommended daily intake of fat, it makes an ideal lunch item. Other products include Carson’s Sliced Dried Beef, Knauss Sliced Dried Beef, and Knauss Deli Style Knuckle, in a choice of flavors.

While the products make it easy for consumers to get a quick, nutritional meal, Alderfer has been experimenting to create breakfast, lunch, and dinner menus, as well as appetizers.

“We always show the tried and true recipes which have been used for over 100 years,” she says, “but we’ve developed new recipes utilizing our beef products in appealing ways that can be enjoyed year-round. Inspirations come from in-store demos, customer suggestions, online blog concepts, and recipe boards such as Pinterest. But the recipes we create are original and customized to accentuate the high-quality lean beef Knauss produces and pairs them with other ingredients such as cheese, fruit, or pasta.”

The full recipes for these dishes are posted on the Knauss official blog and social media platforms. For breakfast, there is a quiche Lorraine a la dried beef, in which beef replaces the traditional ham; for lunch, a dried beef summer fruit salad; and for dinner beefy stuffed potatoes. There are appetizers galore, including southwestern mini stuffed peppers, cream cheese chopped beef poppers, mini-potato boats, and dried beef cucumber bites, to beautify a party tray while offering guests some tasty nibbles.

After being reorganized under the name Knauss Foods, Inc., the company has increased in size over the last four years, according to Longacre, with continued revenue growth. It continues to distribute to retailers like supermarkets, warehouses, and club stores, as well as food service distributors, and food manufacturers, mainly on the East Coast and throughout the Midwest, although its dried beef products can also be ordered online through Destines, Inc. or Amazon and delivered anywhere. 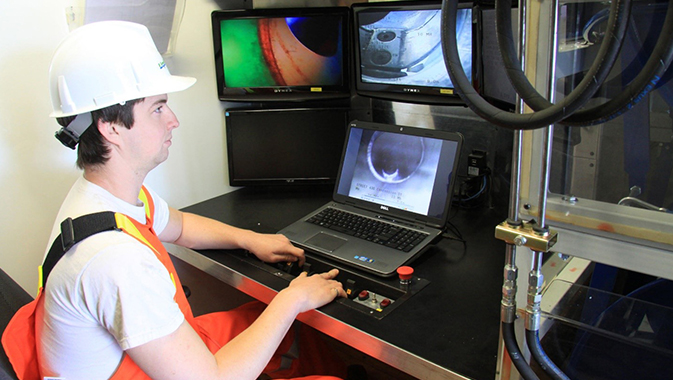 Success in the Pipeline