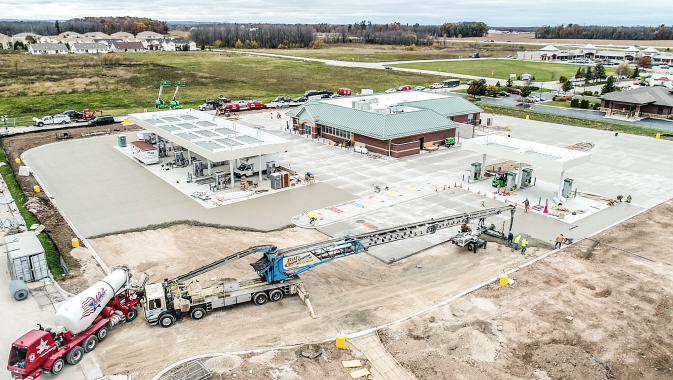 Award-winning concrete construction firm Milis Flatwork is a fairly young company, having been in business less than a decade. However, it was successful right from the start, thanks largely to owner and founder Dylan Milis’ extensive experience. Milis Flatwork specializes in agriculture-related and commercial concrete construction projects.
~
“I’ve been doing concrete my whole life, since 1992. I did a lot of stuff with my dad. Then I went to college to get a degree in civil engineering. Then, I did a lot of layout work for a paving company and a lot of inspection work for agricultural facilities,” recalls Milis, whose firm is based in Kaukauna, Wisconsin.

“I was pouring concrete the whole time, kind of as side work. In 2012, that’s when I totally went off on my own.” That year, he began acquiring equipment. “That’s when the big step forward was,” he continues.

The fledgling firm did not suffer from the kind of growing pains common to many new contractors. Milis’ background, savvy, and contacts made for a high-profile start. “Most concrete companies start out with like two guys in a pick-up truck. I started out with twelve guys. Our first contracts were bigger contracts than concrete companies that had been around twenty-five years had ever seen. We came in very strong.”

“We worked fast but did quality work. We had all the right equipment, and that definitely got us repeat business. It’s been good, steady, continuous growth the whole time [since we started],” states Milis.

The early days of the firm were physically demanding. Milis recalls “pouring concrete twenty hours a day, delivering equipment in the middle of the night, moving stuff around. I was the only one with a CDL (commercial driver’s license). That was difficult. But as far as getting the business off the ground and running, no, that did not seem hard at all.”

Initially, the firm was mostly focused on the agricultural side of things, working on waste storage facilities, feed pads, bunkers, barns, grain facilities, and the like. As of late, the company has been handling “a lot of commercial work. Over the past few years, with agricultural dairy prices being down, we did predominantly commercial work,” says Milis.

The company prides itself on doing most of its own duties. “We self-perform pretty much everything. We have subbed out foundations before, but we pretty much do everything,” says Milis.

Employment levels tend to fluctuate a bit, depending on season and workload – a common occupational hazard in the construction sector. At present, the firm’s employee roster represents a fairly significant increase over this time last year.

Anyone who wants to work at Milis Flatwork needs to meet certain qualifications before being brought on board. Job-seekers do not need to know anything about concrete. They do, however, have to be willing to labor hard in a hands-on manner and be an early riser. Six AM is a common start time, except in summer months, when work begins even earlier. Sometimes, jobs are even scheduled for the middle of the night.

“When we have big flatwork pours, we’ve started at midnight. We’ve done a lot of four AM pours. Get it poured out before the sun comes up to beat the heat, then get home early. We don’t usually start after seven in the morning,” says Milis.

In other words, if you work hard and can forgo sleeping in, Milis Flatwork might be a good fit. “We can teach you anything. We provide multi-level training, so people have something new to work on each year, so they can build their career. We find it very important for employees to have a career and not just a job; it’s important to have a sense of accomplishment at the end of the day,” explains Milis.

The company offers American Concrete Institute (ACI) certified commercial flatwork finishers and is up to speed on all pertinent Department of Natural Resources (DNR) and Natural Resources Conservation Service (NRCS) regulations. In addition to industry certifications and knowing the latest state and federal rules about concrete construction, Milis Flatwork boasts a strong reputation.

“We tend to get some of the largest projects, for sure. We have a pretty good track record of working effectively and fast and putting down a high-quality floor,” states Milis.

Milis Flatwork’s handiwork has earned industry honors. The company’s work at the Drumlin Dairy, for example, netted a 2017 design award from the Wisconsin Ready Mixed Concrete Association (WRMCA). The parking lot at the Hand to Shoulder Center also won a WRMCA design of the year award, while Sheboygan Falls’ Kwik Trip parking lot project was also a WRMCA Design of the Year Award Nominee.

Milis wants vendors that make a good product and can deliver in the necessary timeline. “They have to be within an hour or a forty-five-minute drive or less,” he says. If the quality of the concrete is satisfactory and the producer promises speedy delivery, the final reuirement is quantity. “Can they provide us with enough concrete? If they can’t provide us with a lot of concrete at one time, then we have to do a lot of smaller pours which takes time. That leads to extending the project,” explains Milis.

Milis intends to remain focused on concrete in the future but is eyeing new markets and possibly new concrete-related ventures. “We are a full-service concrete contractor right now, but there are other things we can add to our lineup that we are working on adding in. We want to make sure we have the right people hired,” he explains.

Currently, Milis Flatwork does most of its work in Wisconsin, but has also completed assignments in Minnesota, Iowa, and Michigan. Milis expresses a common industry lament when he observes that many young people do not seem eager to take jobs in the skilled trades sector. During their schooling, “a lot of people are pushed to go to college. They’re not presented with the whole picture, that there are phenomenal opportunities in the trades. There’s lots of hours and good pay,” he says.

On top of that, “concrete finishing isn’t considered one of the big trades,” adds Milis. Typically, when people talk about careers in the skilled trades, they mention electricians, plumbers, carpenters, and welders rather than concrete finishers, though the reality is that less than one percent of the population is able to finish concrete.

Young people might be more inclined to become concrete finishers if they realized the extent to which technology is used in the sector today. In addition to its pump trucks and conveyors, Milis Flatwork uses total station three-dimensional layout systems from land surveying equipment specialists Trimble as well as laser screeds.

These screeds bring the surface of a concrete pout to the desired smoothness and grade. Laser screeds use an onboard computer to accurately determine the elevation as the self-propelled unit smooths the concrete and removes the excess material.

Regardless of any concerns about shortages of skilled workers, Milis has big plans for the future. Over the next five years, the idea is to maintain “continued growth, like we’ve been doing. We’d also like to have multiple locations and maintain our good reputation,” states Milis. 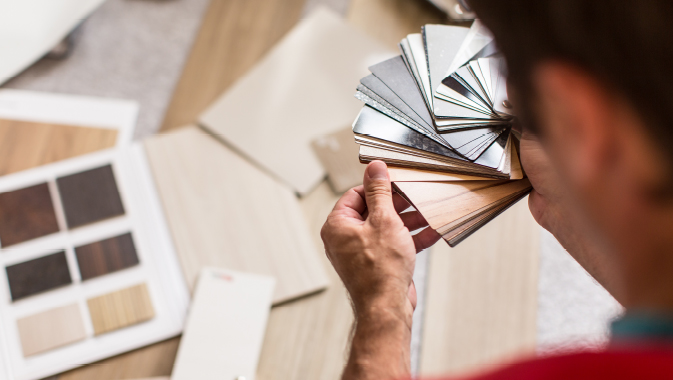 Where Customers Send Their Friends