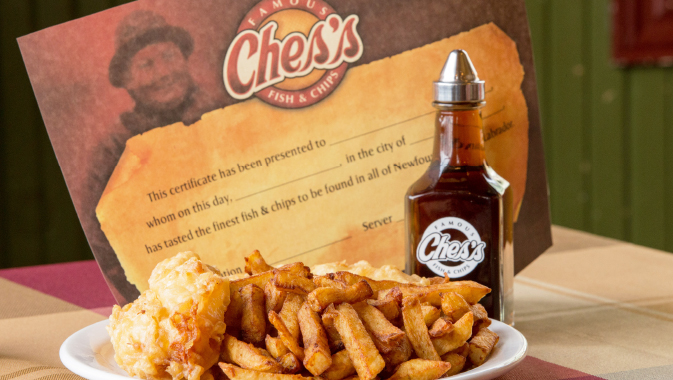 Ches’s Famous Fish and Chips was established in 1951 by Ches Barbour. Now with seven locations across Newfoundland, this third-generation, family-run chain of restaurants serves mouth-watering, quality food that exceeds expectations, and a warm Newfoundland welcome when visitors walk through the door.
~
Ches’s Famous Fish and Chips is very proud of its beginnings sixty-seven years ago. Vicki Barbour loves telling how her grandfather Ches Barbour began the company. “He combined two of his passions: cooking and fishing,” says Vicki Barbour. “He was always an avid outdoorsman. He would get up before sunrise and go down to the St. John’s Harbour, hop in his boat, and steer out through the narrows. He’d fish for a while in the morning, catch what he needed, come back in, clean the fish, sell off what he didn’t think he was going to use, and be open (for business) by lunchtime,” she says.

“He’d cook his catch, peel his potatoes, and work until he was sold out, and then do it again the next day,” says Vicki. “Those were very humble beginnings, but he really hit on something that spoke to him. I don’t think you can be successful in any business that you take on unless you have a passion for what you’re doing, and he had this real love for both the fishing and the cooking and meeting people. And through the years, we’ve simply built on that.”

Today, Ches’s Famous Fish and Chips is still passionate about quality foods. “Now, as a third-generation family business, we still pay a lot of attention to the quality of the fish, potatoes, and all other food we bring in,” says Vicki. “On a daily basis, within each location, we still advertise whether we have fresh or frozen fish. We don’t ever try to pass off frozen fish as fresh. We have customers who say they can’t tell the difference, but we also have customers who would know the difference between the two, and they would call us out,” she shares.

“We still peel all of our potatoes here. We cut them all by hand. We cut our chicken. We cut our fish. Nothing is out of a box; everything is made by cooks who have been very well trained in understanding just what it is to be a Ches’s product,” says Vicki. “We have staff that have worked for us anywhere from five to thirty years. I think our longest employee has been with us for almost forty years now, so that helps in terms of making sure that the quality is still there.”

The company is one big family. “The idea that we’re a family business extends to our staff,” says Vicki. “Some people might say this is lip service, but we really do treat our staff like they’re an extension of our family. When we’re not here, they are, and we depend on them. This close relationship helps give a family feel to all the restaurants.

“We’re also very much of the belief that in order for a Ches’s to really run successfully, whoever has an invested interest in that company has to be hands-on, on the ground level, working with employees, and overseeing the quality of the food and service,” says Vicki. “Even our franchise owners are working. It’s very important that if you have a Ches’s Famous Fish and Chips franchise that you’re working it. You’re not bringing in managers; you’re there. Quite often, the wife, husband, and kids are all there working in the businesses together. So, this ‘family feel’ that we use to describe Ches’s, isn’t just a word; it runs deeper than that.

“It’s very easy for people to assume that we’re a big chain now and that we’re not the same, however, just because we have seven locations, doesn’t mean that we are a big chain,” says Vicki. “All the restaurants, even the franchise restaurants, are still family owned, and the service level and food quality are both still the same. And if somebody has an experience that they are not happy with, they can reach out to the family directly. We are still hands-on, making sure that your Ches’s experience is the experience that you have come to expect.”

Ches’s Famous Fish and Chips is also proud of the fact that the food it serves comes from primarily local sources. “We try hard to work with the local community, but unfortunately, that’s not always possible given the quantity of food we need sometimes. However, our fish still comes from Newfoundland waters; our potatoes come from Atlantic Canada, and we have a partnership with a local cheese company – Five Brother’s Artisan Cheese – that makes our cheese curds. So, whenever we can, we keep those local ties going.”

Ches Barbour’s children and grandchildren had the rare experience of growing up above the restaurant and working in the business from an early age. Now, as adults, they enjoy being a part of their grandfather’s legacy. “We’re sort of in a crossroad space right now, where the second generation; my father, mother, and aunt are still very much a part of the business. And the third-generation; myself, my cousin, and my sister, are trying to find our footing within the company and figure out our own roles. But it’s a lot of fun because we all get to work with our family. It’s challenging, but it’s also very comfortable to work on a daily basis with people you have grown up admiring.”

In addition to menu items, the restaurant has also served up countless smiles over the years. “We’re always very happy when someone says something positive to us,” says Vicki. “But we really appreciate it when we get a customer that has never been here before, that has been told time and time again: ‘Oh, you have to go to Ches’s!’ and they finally come in, and when they’re done, they look at us and say: ‘It’s even better than I thought it would be,’” explains Vicki.

“We have a phrase here; we refer to people from the mainland as ‘come from aways,’ and we have a sign in our restaurants that says: ‘If you come from away, tell us!’ We love to have new people come in here, and in fact, when it’s your first time having fish and chips at Ches’s, you get a certificate that says: ‘You’ve tasted the finest fish and chips we have in Newfoundland.’ We love giving those out.”

Ches’s Famous Fish and Chips has had its share of challenges, but after six decades in business, it has learned to adjust to the ever-changing economic situation. “Like any business, the economy is always a concern, but we’ve had years with good economies, bad economies, recession, and non-recession, so we’re used to the cyclical nature of good years and lean years,” says Vicki.

“The question is what to do during those times when your customer base doesn’t have the spending power that they would normally have. We recognize that we are not cheap food; with quality comes a cost. So, when times are tough, you’ll see us running promotions, deals, and things like that. In the lean times, we tighten up our strings and cut back where we can, but we never sacrifice the food, and we never sacrifice the service.”

Ches’s Famous Fish and Chips supports many causes in the community. “Camp Delight, a summer camp for children affected by childhood cancer and their families, is our primary charity and we held our eleventh ‘Night of Delight’ in 2018,” says Vicki. “So far, we have raised over $500,000 for them. Camp Delight is organized by the Candlelighters Association, and we’re so thrilled to be a part of that charity.” This non-profit association provides services to families affected by childhood cancer.

As great as an experience at Ches’s Famous Fish and Chips might be, the question of whether or not it is a true Newfoundland experience depends on whom you ask. “I would say, everybody comes here with a different expectation of what they want,” says Vicki. “Some people’s opinion of Newfoundland is formed from people that they know from here, while some people’s expectations of Newfoundland are formed by tourism ads, and other people’s expectations come from television shows. So, I don’t know if I believe so much in a ‘real authentic Newfoundland,’ as I believe everyone comes for something different. However, if people are coming to our restaurant looking for St. Johns, Newfoundland fish and chips, then I believe that what we deliver to people, as they walk in the door, should very much meet their expectations; in fact, it should exceed them.”

Ches’s Famous Fish and Chips will continue with the same focus on quality, family, longevity, and local ingredients that it always has. It also aims to expand. With that, there is still the possibility of small changes along the way, but one can rest assured that some things will always remain the same. “We will never make changes to the fish and chips and to the quality of the food,” says Vicki. 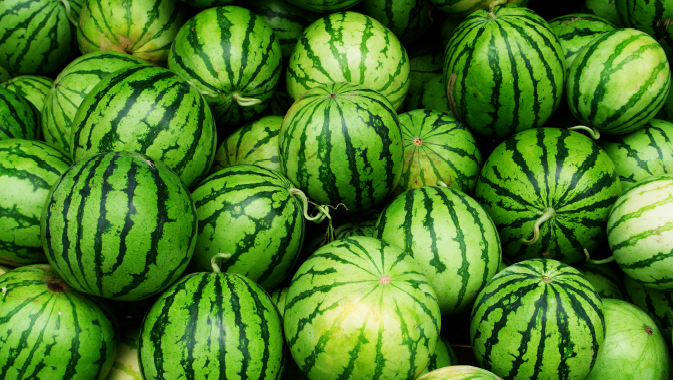