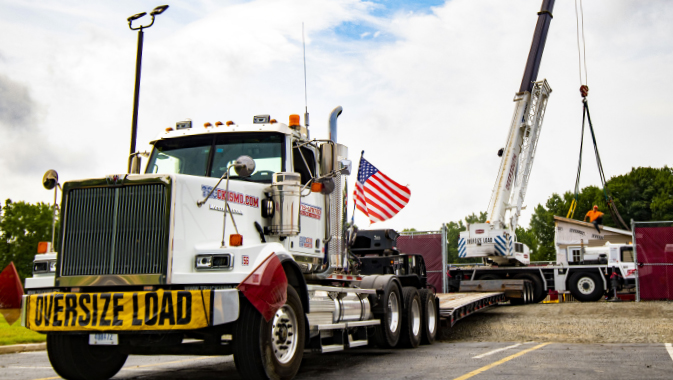 To maintain a business over time is no mean feat. To keep it on the road, weathering financial and national crises for fifty-four years, is something even beyond that. Specialist hauling company Trans-United was started in 1964, in Burns Harbor, Indiana. The company now operates in forty-eight U.S. states, Canada, and internationally.
~
This is undeniably a forward-facing company. However, Chief Executive Officer Jeff Fleming acknowledges how important it is to take stock of the past and learn from experience. This wealth of experience has resulted in customer retention and in-house skills. “I think the longevity of the company has come from the culture to serve and the customer returning, committing themselves to our service. We have a long, rich customer history of many years, and customers continue to return to us because of our ability to take on their size and weight challenges and move them from their manufacturing points or point of origin. It might be an international port coming inbound or an export – we take those challenges and are able to put a competent solution to them.”

The company was formed in 1964 in Texas and operated by its founders until the mid-seventies. At this time, Jeff’s father was looking to acquire an ‘authority’ to begin his own company and found one held by a bank in Illinois. A trucking authority is also known as a motor carrier authority or operating authority and indicates that one has the authority to operate as a freight hauler. “With it came some contracts as, prior to deregulation in 1980, authorities typically had contracts associated with them, so those contracts came with the purchase of the authority,” says Jeff.

While the purchase of a functioning authority was exactly what Jeff’s father was seeking, this particular purchase had its difficulties. “The authority had not been used, and it was actually in bankruptcy at that time. So, if you look back at what authority values were prior to deregulation, they had a much higher value than they do today.” While it was considered an active authority, the reality was considerably different. “His goal was to attain an active authority in the sense that it was still usable in the industry.”

Following that purchase, the company was resurrected and reinvigorated. However, there were further speedbumps ahead for the fledgling firm. “He went through the difficult times with deregulation in 1980 with high interest rates and high fuel costs.” Jeff attributes the strong foundation that had been built as a factor in the company’s survival.

“Those were some interesting times, but I think that his customer base back then and solid driver base helped him get through those days. If an authority wasn’t carrying the value it once held, the bank still wanted its money, so he had to keep making those payments. With that, interest rates were spiking; twenty-one percent was pretty common.”

The industry is not without its share of difficulties. While regulation, efficiency demands, and competition are factors that Trans-United work through on a daily basis, Jeff is clear about the primary problem that the company and its competitors face.

“Our challenges are similar to those of many others in the industry: the driver. We have got excellent stability in our driver base, but the challenge is growing that base. Whether it is the good economic times that exist – the driver may want to work closer to home – or the regulation in the industry, it puts drivers in a position that they don’t want to be in. They may not want to be battling those regulations.”

The company actively invests in its drivers to ensure that the latest technology is available to assist them. “Electronic logs in transportation became a factor about a year ago, but we were prepared for it, and we had a great tool for our drivers to use, so we didn’t lose any drivers because of it, although others in the industry did.”

It is not just about building up the number of drivers. For Trans-United, the training and retention of its drivers are paramount. The company ensures that its drivers are highly skilled, adaptable, and knowledgeable. “For us, it is about growing new drivers, and occasionally, it is about developing the younger drivers to a skill level that we are looking for. You have to look at the driver’s history, and they have to have at least three years of verifiable, safe history, but in addition to that, we test the driver. We look at their skill-set and knowledge as well as his cognitive ability to reason through and rationalize a situation.”

“Many of our drivers are qualified with what we call specialized super-load qualifications.” Such drivers can evaluate a provision sheet or a permit and know how to work with escorts for outsized loads. Trans-United has built its reputation on giving its customer an assured and reliable experience. The driver is of key importance to ensure the job runs smoothly.

“Our job is to move the customer’s freight from A to B, regardless of what size or weight it is. We have to make sure that we are in full compliance. It takes a skilled driver that can analyze multiple situations from the beginning of the route through to the end. We work diligently to develop those men and get them to those high levels.”

Attention to detail, coupled with a measured and considered guarantee of success, is what sets Trans-United apart from its competitors. Jeff insists that this approach to dealing with its customers is always present and is something which gives it an edge.

“It is the planning of the project. A lot of carriers will go out there and make a commitment that they can move something, you know, this size or this weight. Instead, we take a very experienced and analytical approach. We measure and evaluate it right the way through from pricing to execution. These things help with driver retention, with customer retention, that ability to analyze and execute.”

Trans-United has been operational and growing for over half a century, and it has no intention of stopping. Growth is a vital part of the company, and Jeff understands that to achieve this, it needs to have the best team available.

“In regards to where we are going, there is a growing opportunity here in this company. We have made significant investment in new software technology, and we feel that we can provide some of the best tools for any driver in the industry.” He believes that by planning, the company can push to even higher levels of excellence.

“Technology has come a long way, and some of the things we can do with technology – even in the cab of the truck – to save the driver a stop to get a permit because he can print it in the cab. We can track and trace our drivers to within one hundred feet, so our customers can get an immediate status. Those technologies have helped us; we are more efficient. We are more effective.”

The company is also a leading light throughout the industry with regards to safety. Trans-United repeatedly receives awards in this field, something about which Jeff is deservedly proud. “The last four years, back-to-back, we have been ranked as one of the top fifty specialized carriers in North America. That is due to our size and capacity.”

“When we talk about capacity, it really comes down to how much equipment we have in our fleet that we are capable of having out there. We take it in very high regard. There are other specialized carriers out vying for the same award, and we are out there moving some of the most difficult loads there are, and we are coming out on top.” 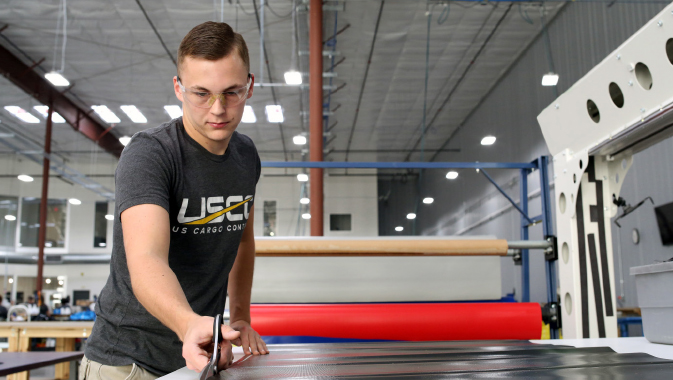 E-Commerce with a Personal Touch