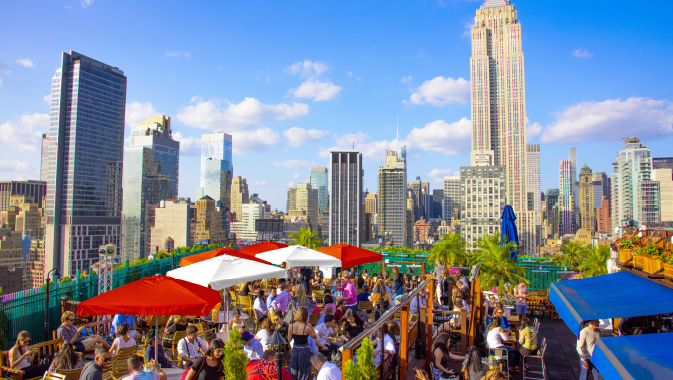 In New York City, the city that never sleeps, there is no shortage of things to do and see. On any given night, there are a number of parties or events that can be attended and lots of fun to be had. 230 Fifth Rooftop Bar is a place for locals and tourists alike to congregate to enjoy fresh drinks, fresh foods, fresh air, and a fresh take on the New York City nightlife scene. As the largest rooftop bar and enclosed lounge in Manhattan, it towers above the rest.
~
Located on the twentieth and twenty-first floors of an iconic textile building in the Flatiron District, 230 Fifth Rooftop Bar is where people come for unparalleled views and where the social experience is taken to new heights.

Beyond the breathtaking views of the Empire State Building that visitors can enjoy from the 30,000 square foot venue perched atop the city’s renowned skyline, the inclusive and accessible space gives guests the option of enjoying one of its public or private rooms or the 14,000 square foot outdoor patio, making it attractive to many.

Having made changes to the way it operates and provides experiences for its patrons, 230 Fifth Rooftop Bar is starting to appeal to a different demographic, attracted to happy hour specials and special events. Director Sal Rozenberg noted, “The area also changed. The younger people that are not in finance, but more in the creative fields, have started to come here.”

Mr. Rozenberg wants 230 Fifth Rooftop Bar to be, “not just a tourist destination like we have been for the last few years,” and efforts are being made to transition the venue into a local spot once again.

He noted, “It used to be seventy-thirty tourists to locals and now it’s probably fifty-fifty. We want to create unique experiences for people. We just don’t want it to be a typical bar. We want people to have fun.”

230 Fifth Rooftop Bar is an experience in the making, four seasons of the year. Despite the cold, harsh winters New York City can face, there is no offseason here, even for the garden, which operates throughout the year producing fresh items for use in drinks and menu items. There is always something new going on in the kitchen and behind the bar.

“We added a frozen drink menu this year that we didn’t have last year,” Mr. Rozenberg explained. “In the summertime we offered a peach margarita, a mango frozen drink, a frozen coffee with vodka, a frosé, which is frozen rosé wine and vodka among other drinks and in the winter, once again, we’re going to offer the boozy hot chocolates and some other surprises.”

In the wintertime, to remain open and accessible for guests, the outdoor rooftop area at 230 Fifth Rooftop Bar is transformed by transparent igloos that provide shelter from the elements and an opportunity to interact with other patrons of the bar. As the weather cools down, 230 Fifth Rooftop Bar will be offering s’mores packages and other fun food and drink options that can be enjoyed in the warmth of one of the one-of-a-kind rooftop igloos, the newer and improved versions of which are being launched this year.

The new igloos are larger in size, measuring in at sixteen feet wide by ten feet tall, versus last year when they were just over six feet tall and 11 feet wide, meaning more people can fit inside and can intermingle with one another. The design includes new materials and the addition of a door.

“They are more transparent: polycarbonate with aluminum igloos built to seat more people, and half of them will be decorated with different themes. We will also add the ability to reserve some of them for brunch and bottle service and dinner, whereas last year they were all first come first serve,” Mr. Rozenberg explained.

“We’re certainly going to make them warmer, with bigger fireplaces and warmer materials and lighting, whereas last year there were simply a bunch of chairs and tables put in it. It was still an incredible experience,” he said.

To be sure, the guest experience is paramount at 230 Fifth Rooftop Bar. As Mr. Rozenberg stated, “We don’t want people to come to 230 Fifth to just drink and enjoy the view; we want them to be comfortable and meet new people and interact. That seems to be missing in 2018. People are going out but they aren’t communicating with each other anymore. We’ve all heard of more technology, less communication.”

After watching people interact in the igloos, Mr. Rozenberg gained a greater awareness that people were exchanging numbers and making friends inside the igloos, not necessarily for dating purposes but for business purposes, building friendships and expanding social networks, and he wanted to find a way to further encourage those social interactions. Acknowledging that people are prone to retreating into their phones, even in social situations, Mr. Rozenberg and 230 Fifth Rooftop Bar have devised a solution to leverage the power of the mobile phone to improve communications at the venue.

“I realized that people are on their cell phones all the time and people are less likely to approach others now because of technology, so I wanted to include technology in the way people can meet at 230 Fifth and that’s why we created the app,” he said.

The Approach Now app was designed to change the way people meet with each other and interact at 230 Fifth Rooftop Bar. The app has been tested, it works great and will be launched by the time of publication. Each night, the venue shares a unique code with patrons that can be entered into the app, allowing people to connect with other app users in the bar. Guests have the ability to remain anonymous by using a default avatar, or they can upload photos and share as much information as they’d like. Contact can be made via chat room or private message.

Mr. Rozenberg was sure to highlight how Approach Now is different from other apps and social networking platforms. He explained that because of the evening-specific code, users won’t be investing the same time in establishing a prior relationship before meeting. It is immediate and convenient.

“You’re in a public environment. You’re ready to meet people already because you came out and you don’t have any scheduling conflicts, so you pretty much instantly meet people that you wouldn’t ordinarily talk to by using this app,” he said. It is a public place where safety can be ensured and the ability to catfish someone is greatly reduced.

“When you leave the venue, it will log you off and you can’t log on until the next day because the code changes. The only place the code is visible is when you enter the venue, so this is sort of a new way to interact with people at the venue and no other bar in the world offers this way to connect with others via an app,” he explained.

While other apps have been developed for users who are considering attending different venues, this is a more venue-specific app that takes the guesswork out of the who’s who at the party. “We all know that plans change and we jump around venue to venue, so it doesn’t really eliminate the time wasting and the frustrations that come along with trying to meet somebody,” said Mr. Rozenberg of other apps.

With innovative ideas like the Approach Now app, 230 Fifth Rooftop Bar is making every effort to remain relevant as a preferred venue. Though it continues to evolve, one thing remains the same: the experience comes first. And this is why it will remain viable for years to come.

In an effort to remain one of the hottest spots in the city, 230 Fifth Rooftop Bar will renovate early next year to breathe new life into the space. If the past is any indication of what guests can expect, the result is likely to be sensational and will further reinforce the experience it offers, night after night and day after day. 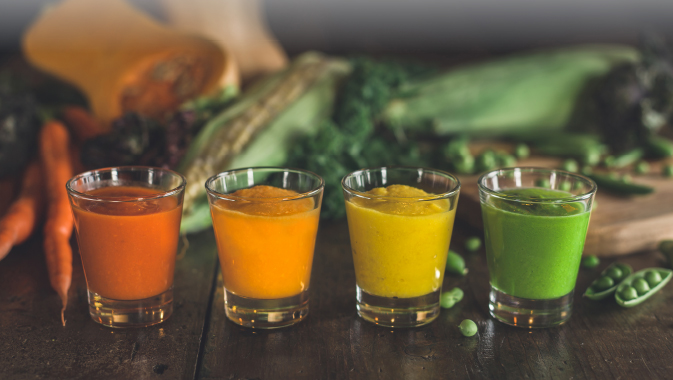 Specializing in 100% Fruit and Vegetable Products