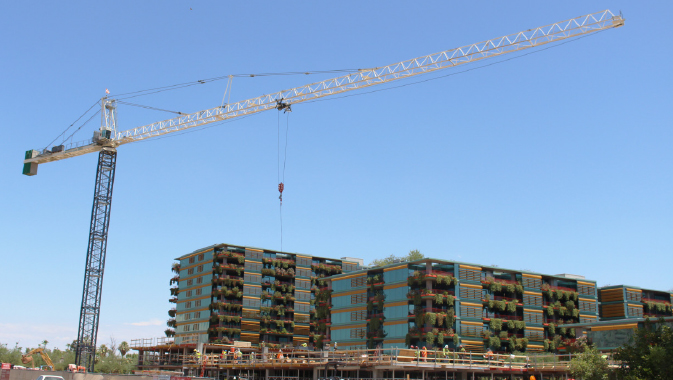 Stafford Crane Group is a rental provider of various types of crane equipment to the construction industry including tower cranes, mobile cranes, self-erecting cranes, overhead cranes, hoists, and platforms. From its headquarters in Phoenix, Arizona, the company serves global markets on five continents.
~
Stafford Crane Group has been providing tower cranes to the construction industry for more than thirty years and continues to be a global leader in the field today. The company was originally established in the United States by Patrick Stafford as an offshoot of his brother Derek Stafford’s tower crane business. Derek founded the original Stafford Tower Crane company in Dublin, Ireland in 1985, and Patrick brought the idea to Scottsdale, Arizona in 2005.

Initially, the company provided only tower cranes, but eventually expanded its product line to include mobile and overhead cranes as well as construction hoists. The company’s headquarters was later moved to Phoenix to accommodate growth, and in 2006, Stafford added a training division called the Tower Crane School of Phoenix.

This family-owned company has built its success on the values of honesty, integrity, hard work, and a firm commitment to customer service. “Nobody out there can beat us on response time and getting answers to customers,” says Stafford Crane Group Owner, President, and Chief Executive Officer Patrick Stafford. “We take care of our customers, not one week later, but one hour later. If you ask a question now, it’s because you want an answer now. As a family-owned company, we can make decisions so as soon as we get a question, we can have the answer.”

Stafford Crane Group provides four types of cranes from various leading brands in a wide range of size classes and load capacities. The company carries brands including Terex and Comansa with a height under hook (HUH) – the maximum height from the ground to the hook block – that range anywhere from 144 to 365 feet. Some of these cranes can lift up to 70,000 pounds at the tower and up to 30,000 at the end of the arm, known as the jib tip.

For smaller projects, Stafford Crane Group provides a fleet of mobile and self-erecting cranes for a wide range of applications. Mobile cranes are attached to the tops of trucks and can be used to erect large tower cranes or for any number of other jobs. Self-erecting cranes are small tower cranes that erect themselves autonomously by unfolding. The company has a selection of self-erecting cranes including the newest large capacity Vicario model with 148 feet HUH and load capacities of up to 8820 pounds at the tower and 2205 pounds at the end of the arm.

This year, the company began offering a line of overhead – sometimes called bridge – cranes. These cranes are different from the rest in that, rather than having the hook on the end of a rotating arm, the hook hangs from a horizontal bridge and can move back and forth along its length. These can either be held in place by the ceiling girders in an industrial facility or be on attached legs for outdoor applications.

The company also offers hoists capable of lifting up to thirty workers or 7100 pounds of material at a speed of more than 300 feet per minute. For larger projects, it has a series of platforms that can lift up to 20,000 pounds at three feet per minute. This equipment can be very useful for increasing efficiency and safety on a job site.

Safety is a central consideration for Stafford Crane Group. The company’s leadership spends most of their time on job sites working side by side with their employees. “We’re on the job site all the time,” says Stafford. “We go out to these projects; we work next to these guys, and we don’t ask anything of them that we’re not prepared to do ourselves. We maintain that there is no reason to take shortcuts. We do things safely, and our customers know that that’s the most important thing.”

Further toward ensuring that the company is operating safely, it offers training courses through a division of the company known as the Tower Crane School of Phoenix. Through it, Stafford Crane Group provides courses for proper mobile and tower crane operation, telecommunications tower technician training, and National Commission for the Certification of Crane Operators (NCCCO) certification. These courses are thorough, hands-on, and useful for both new and experienced crane operators.

One of the keys to Stafford Crane Group’s success is its commitment to maintaining a culture of respect within its workforce at all levels. “We care about our employees to a high extent,” says Stafford. “Those employees, therefore, care about the company. That translates to integrity, honesty, and high moral standing. It’s such a small industry that, if you treat someone wrong, it won’t be very long before everyone knows about it. You have to offer the supreme customer service experience because these are project managers and superintendents that you’re going to have to deal with over and over. If you take care of them, you’ll have the opportunity to keep working with them for the next thirty to forty years.” Stafford Crane Group’s commitment to its employees has enabled it to develop a great team of people who are dedicated to preserving its reputation by providing the best possible experience to customers.

To maintain this level of customer service, the company has managed its growth carefully. The leadership believes that being accessible and nimble enough to react quickly to customer demands is what has allowed it to differentiate itself from its larger competitors. While some of the larger companies in their marketplace are able to charge less, they are unable to match Stafford Crane Group in a few key ways. Stafford is small enough that decision makers are always either on site or available to pick up the phone, answer questions, and solve problems on short notice.

The quality of the service is unrivaled because the company cares about each project. “I care about my customers because I know that if we don’t make them successful, they won’t use us anymore,” says Stafford. “We care about our customers because we believe we’re going to have them for evermore. That can only be achieved by making sure that we pay attention to the details, that we’re honest on quotations, and that we stick to budgets and schedules.”

Stafford prioritizes opportunity over immediate profit because the company understands that a satisfied customer will bring more business in the future. If unforeseen circumstances result in the project costing more than anticipated, Stafford Crane Group will often absorb the added cost to make sure that the price is what the customer expected it to be.

Operating cranes can be a highly dangerous endeavor. Stafford said he sees every single time that a crane is erected or dismantled without incident as an achievement. “You’re only as good as your last job,” he says, “so when you complete the erection or dismantling of a two-hundred- to three-hundred-foot tower crane, for us that’s the only achievement that matters. You can do everything safe for twenty years, but if you hurt someone tomorrow morning, all of your achievements have been pointless.”

Having good people on staff has helped it in maintaining a safe work environment. The most significant challenge has been finding the right people to bring on board, because in most cases it takes time to determine whether or not a worker is the right fit for the company’s culture. Dangerous work habits are commonplace in the crane industry, and the company is only operating safely if every single worker is operating safely. Having the right people on the team helps the leadership to scrutinize new employees and identify those who are taking shortcuts.

Going forward, the company plans to continue growth at a manageable pace. This has been a challenge at times because many of its customers are so satisfied with the service that they have asked the company to work on projects in other cities and states where they do not already have crews. Leadership plans to take advantage of these opportunities to the best of the company’s ability while maintaining the level of customer service it has always promised.

“My cell phone number has been the same for the last fifteen years, and it’s given to every customer we do business with,” says Stafford. “We want to be able to grow, but we also want to be able to take those calls and maintain that level of connection.”

The FRED Way - Exceeding Expectations on all Fronts