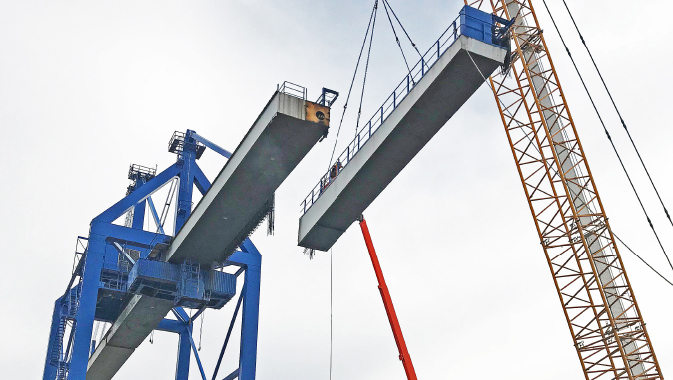 Industrial & Crane Services, Inc. (ICS) of Pascagoula, Mississippi has a heavy-lift and transport division, an industrial division, a ports division, an engineering and survey division, a fabrication and machining division, and a drive to succeed. The firm, which has completed projects across the United States, the Caribbean and as far afield as Africa, specializes in projects involving industrial cranes and lifting equipment. Business has been booming, particularly in the ports sector.
~
Much of ICS’s success can be attributed to its flexible mindset in the face of unexpected developments (which are common in the sectors the firm services). This mindset is epitomized by the company slogan, “creative solutions to complex problems.”

“Here at ICS, any time you’re doing anything, whether it’s a heavy lift or working at heights [in a crane] it’s always complicated. Nothing’s ever simple,” says Vice-President Chase Pritchard.

He cites a project the company completed earlier this year for the Port of Houston Authority that involved “three crane relocations and two dismantles. We started by dismantling the two cranes. We had a schedule laid out with the port that was approved, then the operation’s schedule changed, and we suddenly had a window of 36 hours to move the other three cranes and rearrange them on the wharf. It was a typical ICS project in that we had to scramble to find a solution to better accommodate our client. We secured the dismantling side of the project, then the next day, ended up relocating all three of their Ship-To-Shore cranes. I think that project highlights what ICS stands for and the type of service we provide.”

At present, “the ports division is by far” the biggest revenue-generator for the company, says Pritchard.

The main services provided by the company are centered on cranes and lifting equipment. “We’ve done everything from erecting cranes to refurbishing cranes, relocating cranes, extending the booms, etc.,” says Pritchard. Lately, ICS has been doing a great deal of crane relocation projects. “As ports get new cranes, other ports want to purchase the older ones. So we’ve been relocating cranes,” he explains.

The company’s workload has also increased at refineries where ICS utilizes Self-Propelled Modular Transporters (SPMT) for moving heavy loads. ICS’s fabrication and machining division has been busy as well, tackling projects for crane manufacturers, among other clients.

Regardless of the job on hand, ICS emphasizes speed, quality, efficiency and an operations-driven approach. “If their cranes don’t work and they can’t unload ships, they can’t make money. One thing that ICS tries to do is come in, and know what needs to be done; everything is planned out. If a crane is down and maintenance needs to be done, we try to come in and get it done as quickly as possible,” says Pritchard.

While the company primarily works in the United States along the Gulf Coast and Eastern seaboard, ICS has “moved cranes to Puerto Rico, the Ivory Coast [in Africa] and Brazil,” reports Pritchard.

While the company owns a selection of industrial cranes, forklifts, SPMT units, etc., it frequently rents additional gear. “We still do rent a lot of cranes for short-term projects. If it’s just a couple weeks, it’s easier to rent a crane than it is to ship one,” explains Pritchard. Initially, the firm was primarily focused on relocating, retrofitting, repairing, erecting and dismantling Rubber-Tire-Gantry (RTG) and Ship-to-Shore (STS) cranes. The company expanded into other types of industrial cranes as well as heavy-lift and transport, then continued adding new markets and new services to its portfolio.

Yet one of the biggest recent developments at ICS involves people, not equipment. The top level of the firm experienced some changes, with a senior superintendent moving up the ranks into management. This, and other decisions, helped the company refocus, and “get back to its core values of being customer-driven, being efficient in all tasks,” says Pritchard. This promotion reflects ICS’s approach to workplace relations. People are encouraged to speak their mind, so the company can benefit from their insights and experience. “We try to create an atmosphere here where everyone has the ability to speak freely, from the guy hired today to Todd Williams, the Owner. Everyone’s input is wanted.”

Robert Todd Williams, a former member of the U.S. Marine Corps, founded ICS in 2003 and remains President and Owner today.

Roughly one-and-a-half years ago, ICS was certified by the U.S. Department of Veterans Affairs as a veteran-owned small business. It was a proud achievement for a company founded by a former Marine that counts three veterans in its management staff. “We try to give back to veterans. That’s one focus we have. We understand coming back [from military service] and needing a job or opportunity,” says Pritchard.

While headquartered in Pascagoula, the firm has branches in Illinois and Texas and an office in Indianapolis, Indiana. The firm has “about 45 employees right now… We try to stick to between 40 and 50 for the most part. That’s about where we think we can stay the most efficient,” says Pritchard.

Finding new workers and maintaining the skilled labor force at ICS has been the company’s biggest challenge as of late. The firm wants new hires “with a diverse background and a willingness to learn. We don’t hire welders to be welders; we don’t hire operators to be operators. We need you to be able to [multi-task] and be willing to do it. The level of experience we require of our skilled labor force is something we’ll probably always struggle with,” says Pritchard.

Workers also have to be prepared to be called into action on a moment’s notice or to deal with situations that weren’t anticipated. Thinking on your feet is part of the company culture. In similar fashion, two of the main criteria ICS uses when choosing suppliers are “response time and reliability,” says Pritchard. Vendors need to be aware that Industrial & Crane Services is often “called on to provide service in a quick time frame… sometimes it’s late at night or not convenient,” he adds.

Pritchard offers another real-life example of ICS’s ‘think fast’ mindset. In December of last year, ICS worked with the Philadelphia Regional Port Authority on a crane dismantling project. The Authority had just acquired two new cranes when ICS was called in, on an emergency basis.

“They called us Friday and asked how quickly we could mobilize. On Monday, we had a crew of 10 heading to Philly. I believe it was 22 tractor trailer loads of equipment. Within three weeks, we had the Ship-To-Shore crane dismantled and removed from the wharf,” Pritchard shares. The Philadelphia job was completed in January, 2018 while the Houston project cited earlier wrapped up a few weeks later.

At present, the company is in the midst of starting a new project with the Port of Houston. The new assignment involves six crane rail refurbishments, and will take around five months to complete.

The company is also currently working with a local client, Ingalls Shipbuilding (a branch of Huntingdon Ingalls Industries) on two crane refurbishing projects.

Safety training at ICS starts on “day one with new hires… we have an initial training program that all ICS employees must go through that’s renewed annually. We’re part of the Gulf Coast Safety Council based out of Biloxi, Mississippi. They do additional safety training for employees and they also do site-specific training for our local customers. Most ports or industrial customers have site-specific training that the crew going to that facility will have to go through. Additionally, every Monday morning at 6 am, everybody that is working out of home base, has a safety meeting, including office staff,” states Pritchard. ICS belongs to the Specialized Carriers & Rigging Association (SC&RA), and membership entitles the company to “additional training for free or a discounted rate” and some advertising opportunities, says Pritchard.

In terms of promotion, the company attends select trade shows each year, including an annual event in Jackson County, where ICS is based. That said, the firm’s main promotional tool is its record of stellar work. “We rely heavily on our reputation in the industry. The ports world is a large industry but everybody knows everybody,” explains Pritchard.

ICS isn’t planning on introducing any new services in the near future, preferring to focus on enhancing its existing services. Over the next few years, ICS hopes to expand its ports division and the manufacturing capabilities of its fabrication and machining division, among other goals. This vision is predicated on an optimistic business forecast.

To this end, Pritchard envisions “exponential growth” for his industry. “If you look on various ports procurement websites, I would dare to say three quarters of them have a project out for bid or just closed bidding to either extend the wharf or modify the wharf for larger cranes to allow larger ships into the port [to unload] more containers per hour. As ports increase their wharf capacity or extend their wharfs, they can and will have more cranes. For ICS, that just means there are more opportunities for work.” 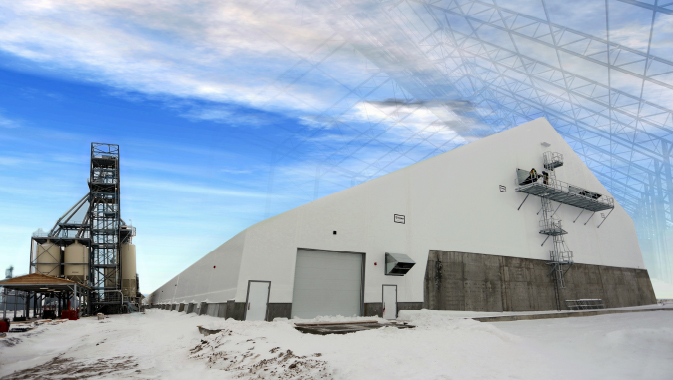 Shelter that Takes on All Extremes