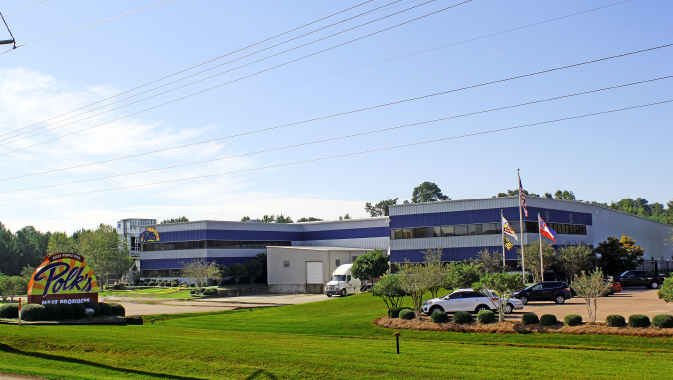 Family-owned Polk’s Meat Products provides smoked meat products, specializing in sausage, ham, and specialty items for restaurants, retailers and commercial customers in the food services industry. Polk’s meats have found their way into restaurants and dining rooms throughout the Southeast.
~
The company’s roots reach back to 1969 when retired barber Milton Polk first sold his hickory smoked ham. He had perfected his process and secret recipe over the years by making ham for friends and family, but that year, he realized that his hobby had the potential to be a business. Soon, he began making sausages from the leftover trimming from the hams, and Polk’s Meat began gaining respect in the area for its products. Milton’s son John Polk watched as his parents grew Polk’s Meat from a retirement hobby into a successful company, and in 1974, he decided to take the reins and carry on the legacy.

Under his leadership, the company grew significantly. In 1998, Polk purchased a competing company in Bay Springs, Mississippi called Hickory Hollow Farms, and for two years, Polk’s Meat operated from both locations. In 2000, the company decided to consolidate its resources by bringing both operations under one roof. A new ultramodern meat processing facility was built in Magee, Mississippi, and from this location, the company has expanded and grown into a well-recognized producer of top-quality meat products.

In 2011, the company transitioned into its third generation of family ownership with Julie Polk-Breazeale at the helm. John Polk has continued as chairman, but he left his leadership role in the capable hands of his daughter so that he could pursue a career in politics. Today, he holds a seat in the Mississippi state senate.

After fifty years in business, the Polk’s Meat brand has become a staple of Mississippi restaurants and retailers. “We take pride in what our family has built,” says Polk-Breazeale. “We stick to our family values and surround ourselves with people who have the same outlook as we do. That’s how we’ve evolved.”

Family is central to Polk’s Meat and in more than just in ownership. The company’s workforce is a family of its own. Many of the employees have been a part of the company for decades, but those who are new are equally committed to the product, and invested in the company’s success. “We give our employees numbers, and we have one person here whose number is 004,” says Polk-Breazeale.

“He’s been here a long time. He’s one of my dad’s first team members, and he won’t tell us when he’s going to retire. We don’t really want to know.” People who come to work for Polk’s Meat stay because it is more than a job; it is a family, and they get a sense of pride from what they do. Further, the company’s leadership rewards their effort. It rarely hires talent from outside the workforce, opting to promote from within where possible.

Polk’s employees take pride in their work because the company and its product have earned a reputation for quality. One day, early on in the company’s history, an advertising spot was purchased on local radio. Without a script, the station disc jockey ad-libbed and told his listeners that he was picky about his Polk’s. This inspired a slogan that the company uses to this day and one that it believes whole-heartedly: “Picky People Pick Polk’s.”

The company continues to operate out of its Magee facility and runs with a crew of roughly 115 employees who work in production, maintenance, sales, and administration roles. From within this state-of-the-art processing plant, it can make any meat product that is fully-cooked and processed, but it specializes in cooked hams, smoked sausages, bone-in ham for the holidays, and several specialty items. Polk’s commitment to flavor and quality has made it successful.

Over the course of the company’s lifetime, it has mastered flavor and developed a reputation for quality that has enabled it to reach a broad range of customers throughout the Southeastern United States. It has a fleet of trucks that travel within the state and also distributes to Louisiana, Alabama, Florida, and Tennessee. It does some distribution in the Carolinas, and its products are prevalent in Chicago, Detroit, and Dallas. Throughout this region, Polk’s Meat is well known and well loved.

One of the ways that Polk’s Meat stands out in the wide selection of competing products is that, while many competitors have been moving toward liquid smoke, Polk’s prefers the classic aromas and flavors that can only be achieved using hickory chips. The company has developed an amazing hickory smoke flavor that customers love, and complementing this traditional approach is the secret recipe developed by Milton Polk.

Beyond the traditional flavors, Polk’s also offers a Cajun variety of smoked sausage. “It has a little spice to it, but we’ve been told by numerous Cajuns that it’s a true Cajun flavor,” says Polk-Breazeale. When the company acquired Hickory Hollow in 1998, it added two of Hickory Hollow’s very popular brands to its product line. The Red Rose and Magnolia sausages are both red sausages that have found a great deal of popularity in the Mississippi Delta, Chicago, and Detroit.

Compared to many of its competitors, Polk’s Meat is a small enough company that it can react to the needs of customers with small volume requirements and provide the personal touch that only a small company can. Despite its size, however, the company serves a number of large customers effectively as well.

“We have a couple of national restaurant chains as customers because they have seen that we’re capable of handling their needs,” says Polk-Breazeale. “I think what really differentiates us is that a lot of the larger providers, if your order isn’t large enough, they just can’t do it, because it slows them down. For us, we’re able to cater to smaller customers, but we also have the capacity for larger orders as well.”

Polk’s Meat has made it a mission to work hard and create safe, great-tasting products that customers come back for again and again. While it does not have all the onsite resources that its larger competitors have, after nearly half a century in business, if there’s a question they cannot answer, there will be someone within the company’s network of friends and partners who can. “Even though it’s competitive, we’re all a tight-knit group and willing to help each other. Having these resources helps us,” says Polk-Breazeale.

Whether with its own workforce, its customers, or its industry, Polk’s Meat is committed to the partnerships that have led to its success. The company takes this further and is involved in the local community through charity work and sponsorships. Sponsoring local sports teams at the minor and college level has become something of a niche for the company. The University of Southern Mississippi, Mississippi State University and the University of Alabama teams are but a few sports teams that are sponsored by Polk. This has been a valuable marketing endeavor, but it has also helped to bring the company closer to the communities that support it.

Milton Polk’s hickory smoked ham hobby has grown into something much bigger over the last half a decade. And as a woman in charge of a major supplier in a male-dominated industry, Julie Polk-Breazeale has seen her share of challenges. “As the days go by, I become more and more accepted as someone with knowledge in the business and long-term pedigree, but I can remember going to auctions with my dad and getting funny looks,” says Polk-Breazeale. “But after putting in the time, I think I’ve really earned my way into the industry.”

Soon the company will be celebrating its fiftieth year in business. “I’m sure that, in 1969, my granddad never dreamed this company would see fifty,” says Polk-Breazeale. “Now I dream about it hitting one hundred. We want to grow our market share so that people everywhere can be picky about their Polk’s.” 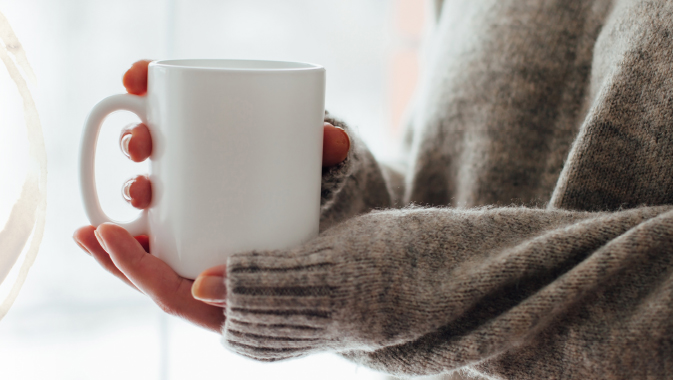