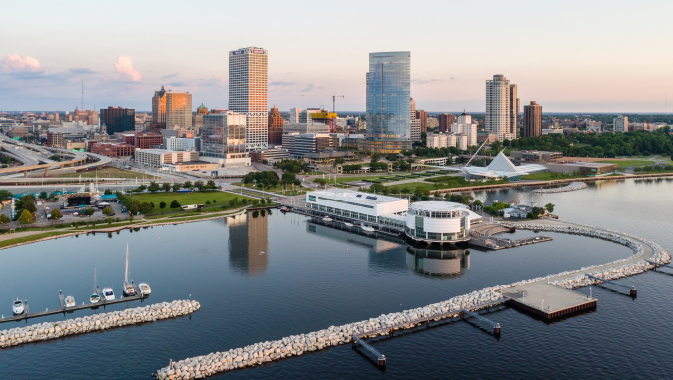 The Milwaukee 7 Economic Development Partnership is a coalition of seven counties in southeastern Wisconsin. With a unique, regional approach to economic development, Milwaukee 7 is bringing thousands of jobs and billions of dollars of investment to the Milwaukee region.
~
Milwaukee 7 represents a seven-county region of southeastern Wisconsin, which includes Kenosha, Milwaukee, Ozaukee, Racine, Walworth, Washington and Waukesha counties. The region encompasses the city of Milwaukee and the surrounding suburbs, which are home to more than 2 million people. The region is bordered on the east by Lake Michigan and on the south by Illinois.

In the field of economic development, Milwaukee 7’s commitment to regional development sets it apart. The partnership was launched in 2005 with a vision to make the Milwaukee region globally competitive by unifying and leveraging the region’s assets to attract corporate investment.

Economic development tends to be government-driven and thus defined by political borders – but that’s not necessarily how businesses operate. Economic development is really a regional game; companies look at the assets around the entire region when they decide where to locate or expand. This regional focus is a foundational principle of Milwaukee 7.

The manufacturing industry is deeply ingrained in the Milwaukee region. “Manufacturing is woven very tightly into our history and our identity and continues to be a part of our DNA to this very day. Among the 50 largest metropolitan areas in the United States, we have the highest concentration of manufacturing jobs,” says Jim Paetsch, Milwaukee 7 Vice President.

While much of U.S. manufacturing has shifted overseas, the Milwaukee region has remained a hub of the manufacturing industry. “There’s a huge base of global manufacturers that are headquartered in our region or have significant operations here, and the reason is the talent we have here,” Paetsch says. “We have a large pool of talent: mechanical and civil engineers, machinists, computer controlled machine tool operators, and assemblers – we have a very high concentration of these people. There’s a critical mass of employment opportunities, and we’re able to supply the workforce that those companies need. We continue to add workers too, through our educational system. We’ve got postsecondary engineering schools here, so we’re graduating well over 2,000 engineers every year at the Bachelors and Master’s degree levels.”

Milwaukee 7 has developed an Economic Development Framework to guide the agency’s work as it strives to attract investment, jobs and people to the region. “It’s a framework upon which many different initiatives can coalesce in order to achieve that goal,” Paetsch says. The framework outlines sectors of the manufacturing industry that are central to the local economy and offer opportunities for growth.

Machinery: The Milwaukee region has a high concentration of machinery manufacturers spanning a wide variety of applications, “from paper making machinery, to machinery used in packaging, and agricultural equipment,” Paetsch says. “For a long time, Milwaukee has been known as the machine shop of the world. We’re proud of that reputation, and it remains true today as it was 50 years ago.”

Food and beverage: “The two traditional economic strengths of the state of Wisconsin are manufacturing and agriculture, and where those two sectors come together is in the food production industry,” Paetsch says. Southeastern Wisconsin boasts more than 240 food and beverage manufacturers, which include specialty food and snack producers.

Water technology: The water technology field offers exciting new opportunities for the Milwaukee region. The area has long been home to manufacturers of traditional water applications including water meters, water heaters and pipe valves. Now, the region is attracting companies creating new technologies that remove contaminants from water, allow water to be used more efficiently, and regulate the flow of water. “Water technology is an area that’s poised for global growth, and so we spend a lot of time thinking about how we can position our region to be successful in that particular space,” says Paetsch. Milwaukee’s value proposition centers on its location on Lake Michigan, which provides manufacturers with access to an abundant supply of water, making it ideal for applications that require large volumes of water.

Milwaukee 7’s framework reflects a strong commitment to growth in these industries. “We recognize that we can’t be all things to all companies, so we focus on these areas, where we have strengths.”

Milwaukee 7 also strives to boost commerce beyond southeastern Wisconsin by encouraging companies to focus on exporting goods and services. “An economy grows by bringing in new money from outside,” Paetsch says.

The framework has proven successful, attracting thousands of jobs and billions of dollars in investment. Since its founding in 2005, the agency has closed 90 corporate attraction and expansion projects, creating approximately 30,000 local jobs. “Milwaukee 7 is very excited about the average wage of those jobs, which is around $50,000 annually. That’s higher than the average wage for all jobs in the region, so we’re meeting our goal of bringing high-value jobs to the region,” Paetsch says.

Taiwanese electronics manufacturer Foxconn made international headlines last year when it announced plans for a new LCD manufacturing facility located in Mount Pleasant, Wisconsin. The company plans to invest $10 billion and employ 13,000 individuals in the new facility, making it the largest corporate attraction project in U.S. history. Milwaukee 7 partnered with the Wisconsin Economic Development Corporation, the Metropolitan Milwaukee Association of Commerce, and other agencies on this project.

The attraction of Foxconn to the Milwaukee region represents a strategic decision to bring digital technology manufacturing to the area. “The Foxconn project plants Wisconsin’s flag in the digital economy of the 21st century. We think an entire ecosystem of digital technology is going to grow up around Foxconn’s investment into our region, and that we’re going to become a worldwide center for digital technology.”

Foxconn isn’t the only major foreign investment project happening in the Milwaukee region. In 2017, German candy maker Haribo announced plans to open a manufacturing facility in Kenosha County. The facility will involve a $250 million investment; it is anticipated to employ 400 workers upon opening, and eventually grow to more than 1,000 employees. “Haribo is an excellent company, and it’s a family-run business. I think they closely align with the values we hold here in Wisconsin, and we’re excited to watch their success in years to come,” Paetsch says.

Business is also thriving in downtown Milwaukee, where a construction boom has brought new commercial and residential developments to the city. A new light rail system in the downtown area is scheduled to launch this fall. On the west side of Milwaukee, a new arena for the Milwaukee Bucks basketball team, the Fiserv Forum, was recently completed and opened in August. The NBA team is a major asset to the region, garnering recognition for Milwaukee from around the globe.

As companies expand into the area, Milwaukee 7 and its partner agencies are tackling the challenge of building a workforce that meets the needs of these employers. The Milwaukee region, like much of the upper Midwest, has seen its population growth slow, resulting in a shortage of workers. Milwaukee 7 and its partners have developed a two-fold strategy to prepare local students to enter the workforce and attract new talent to the area.

The Grow Here campaign, sponsored by a coalition of economic and workforce development organizations, empowers students to explore careers in high-demand fields. Grow Here engages students, educators, employers and other community partners to provide valuable career-based learning experiences that help students discover career opportunities. In 2017, 332 local employers participated in the program. Milwaukee 7 also aims to attract new residents by partnering on a talent attraction campaign – Think-Make-Happen in Wisconsin – with the state’s economic development agency, the Wisconsin Economic Development Corporation, to promote Wisconsin as a great place to live and work. “The cost of living in the Milwaukee area is affordable, and we have a great quality of life,” says Paetsch.

In the coming years, Paetsch is confident that Milwaukee 7 will continue to attract major investments to the region. “The momentum of our recent successes is driving our activity, and we want to build upon it.” The agency will continue to leverage the region’s assets to attract high-value investments, with a focus on digital technology. “Foxconn affords us a really unique opportunity to completely remake the economy of this region, and that’s what we hope to do.” 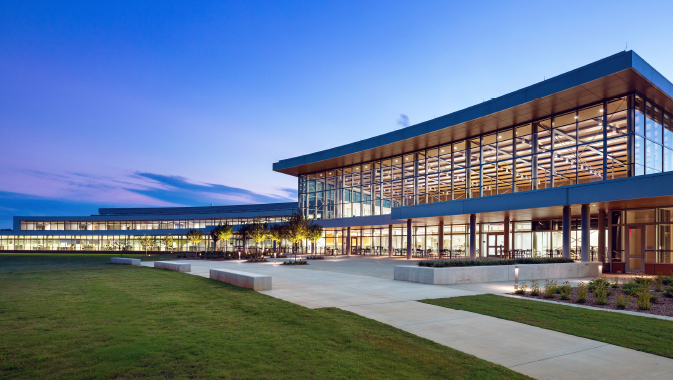