City of Welland, ON 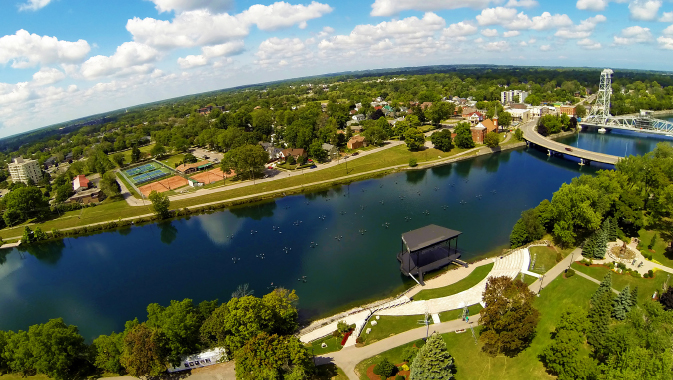 The city of Welland, a hidden gem with numerous amenities, is located in the Regional Municipality of Niagara in Southern Ontario, only 20 minutes away from the majestic Niagara Falls and in close proximity to the Greater Toronto Area (GTA) and New York State.
~
The city has experienced many changes over the years. As a part of the Golden Horseshoe region, it was once one of the most industrialized cities in the country, and when manufacturing downsized, the city was forced to do the same. It began to lose manufacturing businesses in the late 1970s, and this continued into the 2000s when it lost John Deere, a major facility with over one thousand employees. “We’ve been backfilling over the last number of years with a number of smaller companies. Our strategy is basically to look for companies that if we lose, we can replace,” says Dan Degazio, director of economic development for Welland.

In the last five years, manufacturing has returned in a significant way. The city generated 1,600,000 square feet of property for industrial businesses, and a large portion of that was General Electric Company which opened a facility here very recently. “That’s a major catalyst for rebirth in the region and in Welland. Our industry is coming back, but it’s coming back not all in one sector like steel or automotive; it’s pretty diversified,” says Degazio.

Welland is also fortunate to have secondary and post-secondary programs that play a major role in the city’s success.

Niagara College is currently one of the most technically advanced colleges in the country. The college has the ability to design programs around business needs, and its Innovation Centres and Advanced Manufacturing Programs are very attractive to business. The college regularly partners with the industries in Welland to develop workforce training programs that supply the companies in the area with the required skilled labour. GE developed a ten-week program with the college that was designed to give its employees current technical skills. Similarly, there are a few companies in the food industry that are partnering with the college to enhance employee training.

The Niagara Catholic District School Board has a unique program in Welland called the Niagara Launch Centre for high school students in the region. The ten-thousand-square-foot space provides skilled training for youth aged fifteen to nineteen. This apprenticeship opportunity offers college credits to students who are still in high school. The program is starting to catch on with businesses in the area, and they have even begun to sponsor students by paying for their college education after high school with the expectation of employment after graduation. “They’re learning electrical trades, mechanical trades, bricklaying, and carpentry,” says Degazio. “It’s actually really interesting. They’re coming because they want to be there, and it’s rare for them to miss a day of school.”

In addition to Niagara College there are plenty of post-secondary opportunities in close proximity to Welland including Brock University, McMaster University, and Mohawk College.

One project taking advantage of one of these programs is a twenty-million-dollar retirement home residence on the canal. The home attaches to the community wellness complex and is near the hospital, the curling club, and the arena. The building will be a valuable new addition to the downtown area with a five storey 130 unit residential facility.

The housing options in the city are ideal for Southern Ontario. The housing costs have grown higher than was ever expected, yet this is still the most affordable community in the Niagara region. The average house price in Welland is 334,000 dollars, far lower than prices in the GTA.

Welland is a wonderful place to live with an abundance of opportunities for outdoor recreation in and out of the water. For the golf enthusiasts, there are forty-five golf courses within a twenty-minute drive of the city. “The amenities for quality of life are here. We’re attracting an awful lot of people from the GTA right now that had never been to Niagara, but now won’t ever leave Niagara,” says Degazio.

The canal inspires the city to bring in a variety of recreational sporting events. It has one of the top-rated flatwater centres in the world, and in 2015, it hosted the Pan-Am Games. This year, the Welland International Flatwater Centre has held approximately thirty events on the water that have attracted thousands of athletes and spectators to the city. The waterway is strictly used for canoeing, kayaking, and paddling, and there are no large boats. “The canal is relatively wide – three hundred metres – so it’s a big canal that is lined with trees on both sides, and you really feel like you’re up north when you’re kayaking. The water in our canal, believe it or not, is one step below drinking water. When they did the testing for all the different events, they were amazed at how clean our water is in the canal,” says Degazio.

In addition, a fourteen-kilometer asphalt bicycle path surrounds the entire canal between Lake Ontario and Lake Erie, and a 239-kilometer bike path circles the entire region. Welland is an active community that takes advantage of the biking opportunities, and residents often ride to St. Catharines or other nearby cities for breakfast or lunch.

The city of 52,000 is in close proximity to large Ontario cities, offering the best of both worlds. “We’re close to Niagara Falls, Hamilton, St. Catharines, and Toronto, so we have a small-town feel with a large-town ability. Plus there’s the fact that you can get a good job, and we have a college that is very well-rounded in our community,” says Degazio.

Planning is essential for successful economic development. The city will soon be putting some new waterfront property located along the canal on the market, and surely, it will not be difficult to find buyers in such a naturally beautiful region of Canada.

Welland is known for its efforts to become a green city. It recently set up another 250-kilowatt solar field, and that makes a total of three major solar fields that are owned by the city. There are also several smaller solar fields, and the city is currently working with its bus system to develop a fully green bus terminal. The new local fire hall is also prepared to go through a similar process.

A Northern Community with a Can-Do Attitude