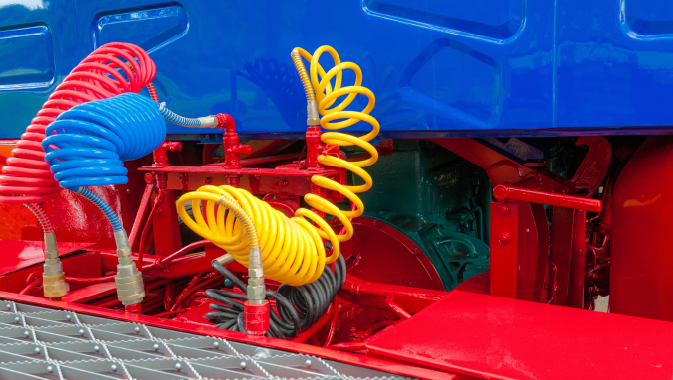 Tectran primarily manufactures and supplies for the heavy-duty truck and trailer market but also supplies parts for the transit and school bus industry. It concentrates on components and systems relating to the air brake system on heavy-duty vehicles. Tectran also manufactures the electrical systems for large transportation units. It is a specialist in tractor-trailer electrical interfaces and focuses on the essential interconnection point between the large truck and the trailer it is hauling.
~
Tectran carries many parts and equipment; it handles around nine thousand different stock keeping units (SKUs) at this point and tries to boost that number by approximately ten percent per year to broaden its product line. However, the air and electrical connections are the company’s main focus, specifically tractor to trailer connections and the various connections within the tractor or trailer that are associated with pneumatic air brakes, electrical systems or even electronic signals. Electronic signals are becoming more common in heavy duty applications.

The company designs and manufactures products that speak to the customers’ needs directly. Tectran pays attention to the end users, whether it is the driver or the mechanics who have to replace these products. It often tends to spend more time on those end users than it does the manufacturers, whose needs are also essential. “If you can’t satisfy the mechanic, make it an easy thing to install and make it durable for the mechanic, the driver and the fleet for that matter, you’ve lost the game,” says Tectran President Bruce McKie.

It is important for the company to manufacture products that offer end-users solutions for service and safety needs. Safety is critical, and Tectran is always up-to-date with safety standards to ensure that its lighting gives abundant visibility and its brakes have enough braking performance. “We design the products ourselves, and we’ve been at it for a very long time. We are in our forty-fifth year in the business now, and a number of us have been here for that whole period of time,” says Bruce.

The company’s employee numbers are steadily growing, and it is excited to employ more people in the communities surrounding its facilities. “It’s part of the joy of being in business, not only providing satisfaction and solutions to the end-users and distributors but also employing people in order to do that. It becomes very satisfying to not just make money, but also to enable people to have good, solid, growing careers and opportunities to learn and to grow in broad ways,” says Bruce.

Tectran has five facilities: three in the United States, one in Canada and one in China. The manufacturing facility in Canada adds value to certain products that are in demand in Canada but not as much elsewhere. There are also different requirements in Canada, where the weight in the trailers must be dissipated by having additional wheels on the road. The extra axle’s wheels lift when turning a corner, although when driving straight, the wheels are lowered to distribute the weight across multiple axles. In China, Tectran mostly manufactures the labour-intensive parts, not the products that require raw materials or cold temperature performance. Those things are much more difficult to acquire in China.

This manufacturing company is often perceived as a parts distributor. It does buy and sell certain items; however, two-thirds of its product range is made of its own manufactured and value-added products.

The vendor-managed Inventory system (VMI), in which the supplier uses buyer information to maintain an arranged amount of inventory, is common in the industry. The premise behind it is that the firm that is supplying goods knows best what the demand variables tend to be and will adjust inventory accordingly. Tectran provides management services for its customers’ inventory through this approach, and through this, the distributor saves an enormous amount of time; it universally improves turnover, and it reduces the chance of running out of stock.

Most importantly, Tectran strives to improve the performance of its distributors. “It’s not just about selling the best parts for the best price; it’s also about supporting them from a service standpoint,” Bruce says. Part of this process involves working through designs, looking at alternative raw materials, determining how to position those materials and how to comply with the Society of Automotive Engineers (SAE) standards. Tectran provides guidance before adding value to products.

Many competitors in the industry are attempting to battle imports; one of the biggest challenges in the marketplace is dealing with domestically designed products that are copied by foreign manufacturers. The number of knock-offs is increasing, and other companies are starting to embrace the process that involves the lower costs of imported products. Because Tectran owns a manufacturing facility in southern China, it is not unfamiliar with taking advantage of the labour costs.

“What we are finding is that people are basically following the market downward, and that is something that is distinctly different than what Tectran is attempting to do,” explains Bruce. “We’ve really been focusing a great deal of our energy on how to make the product better as opposed to how to make it cheaper.” Tectran uses aftermarket parts as often as possible, simply because these have proven to be durable and have endurance.

Savings from imported products are starting to become thinned by the transportation expenses, duties and other extra costs. It also ties up an enormous amount of cash flow if using an offshore manufacturing facility (even one of your own) when manufacturing products at the quality that Tectran wants since it makes reliable products that last. The company does offer a value line of products. However, these are domestically produced, and domestic materials are used. The type of material that is available in North America cannot be found in other countries at a reasonable price.

Tectran wants to resolve the issues that the end-user has. Most trucking companies simply want the product to last as long as the truck, which is often only four or five years. Tectran looks at its products as integrated systems. For example, the company does not look at the electrical hose separately from the air brake hose; it is all one system.

“We came up with a wrapped version of the straight lines years ago on a lark, and it took off. We realized that people were become disenchanted with the coil products especially since they were being cheapened in the industry more and more,” says Bruce. There are good quality coil products, but Tectran raised awareness that the straight lines used to attach tractors and trailers could be hooked up more securely if they were wrapped, protected and prevented from snagging and dragging on the catwalk of the tractor. It is Tectran’s highest-selling product, and its competitors have jumped on the bandwagon and started developing it as well. “We are focusing on it as a complete system. It is not just the four wrapped connection lines; it’s more than that. It’s how you suspend it up off the deck; it’s how you ensure that when you jackknife – which is basically making a complete ninety-degree turn – you can maintain the integrity of those connections,” says Bruce.

Much science and design is involved in making sure that all of the parts fit together properly. Tectran has found that the large North American trucking fleets are buying quality and are not entirely fixated on the acquisition price. The fleets have become more sophisticated, and customers realized that the cost of having to replace parts is higher, especially when a truck is on the road. “As a result, they are really receptive the idea of buying something that is durable and designed effectively for optimizing cost and safety.”

Technology will increase its role in the industry regarding information technology and also electronic data interchanges. Technology utilized in the vehicle is also becoming more critical including sensing, controlling and conveying information, so Tectran plans to expand its manufacturing capabilities and its technical capabilities. The company is aware and prepared for the ever-changing laws that attempt to make the roads safer.

“We are all about trying to keep the transportation costs of goods as low as we can. That is important to all businesses and consumers,” says Bruce.

Safety is also an essential area of the business and will continue to see upgrades. There is a threat to safety and the company’s successful operations due to non-qualified copies of its products. In the future, Tectran is planning to spend more time protecting its intellectual property.

For the future, Tectran will continue to broaden its product line, incorporate more vertical integration in its manufacturing so that it has more control and increase the automation and mechanization in its facilities. “It’s all about trying to do what’s best for that end-user and in turn the distributors and dealers as well,” Bruce says. 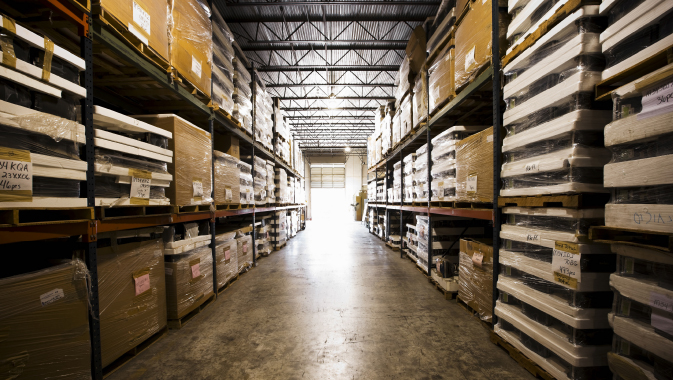