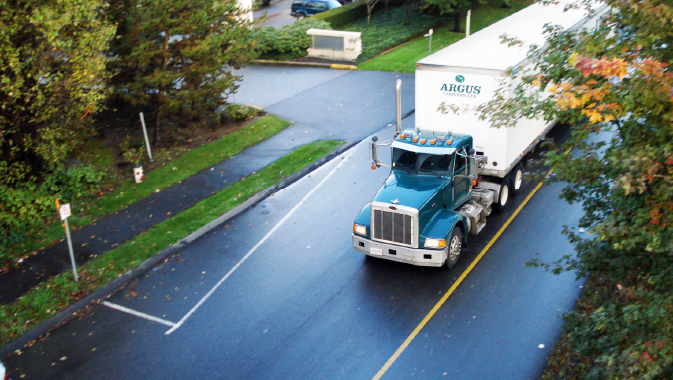 When Jamil Murji departed from his career in the world of finance, he sought to satisfy his entrepreneurial spirit by finding a market that would show promise long into the future. “Everything needs to be moved on a truck. If you look back at 2013, why I entered this industry was that ten percent of the economy is logistics,” noted Murji. Whether by rail, marine, air, highway transportation or warehousing, “everything has to move.”
~
In 2013, Murji set out to identify viable market opportunities. He wanted to purchase an already successful company and use its reputation to sustain him in this new endeavour. He came across Abbotsford-based Inter-Urban Delivery Service which enjoyed a niche market in hospital deliveries and cross-border aerospace deliveries. This is where he began to learn about the prospects in logistics, which led him and an investment group to acquire the company from its retiring owner.

He entered the logistics sector to take advantage of the wave of baby boomers who had built businesses and needed to retire. Logistics also had great potential, given that the economy depends on the movement of goods.

Murji operated Inter-Urban successfully for three years before acquiring Argus Carriers with his investment partners. “I decided that I was ready to get some size and scale, so I started to look for what else was available, and it just so happened that Argus Carriers was for sale. What really attracted me to them was that they’re known in the industry as being the premier service provider,” he explained.

Argus Carriers’ excellent reputation dates back to 1948 when it was established by C.G. (Gerry) Royston, who had returned home from World War II and had a baby on the way. The company began with one truck and one man parked outside of the J.R. Spencer department store. There, Royston waited for his first customer.

In no time at all, demand for Royston’s services ballooned, and he expanded his fleet and added employees. Business continued to grow, and in 1955, he joined forces with Lloyd Shillingford, who owned three of his own trucks, and Argus Carriers, Ltd. was officially incorporated.

Argus Carriers began as a small parcel delivery company that found a way to differentiate itself through efficient pickup and delivery routes. Its exceptional service and safety offered customers peace of mind that their freight was in good hands.

Eventually, Argus Carriers invested in a facility that could house its sorting and dispatching operations. This enabled it to address growing demand without compromising the standard of service for which it had become known. By 1963, Argus Carriers outgrew its original facility and moved to a new terminal.

In 1970, Royston acquired all shares of Argus Carriers and was the sole owner until 1972. In that year, the company, complete with its fleet of sixteen aging trucks, was taken over by Rey Neufeld, who promised to operate Argus Carriers with the care that it had been in the previous decades.

Neufeld agreed to preserve the culture and standard of service on which Argus Carriers’ reputation was built. In 1991, a second generation of Neufelds took over until Murji bought it in 2016. Murji, like the owners before him, recognized the company’s reputation and history and wanted to preserve and enhance it.

Operations Manager Brent Goodrich reflected on the ownership transition. “I’m on the floor, and I see it day to day. With the change of ownership, there is always a buzz at the beginning, and I give credit to Jamil, coming in and meeting the people and telling them that nothing is going to change. It’s been status quo. Everything’s been running just as well, if not better than before.”

With its main terminal in Burnaby and satellite terminals in Victoria, Nanaimo and Kelowna, Argus Carriers is the preferred choice in the Metro Vancouver, Fraser Valley, Vancouver Island, and Thompson Okanagan regions. Given its proximity to Washington State, Argus Carriers also offers less than truckload (LTL) service to and from the U.S. Pacific Northwest.

“Combined, we’re at about 65,000 square feet of cross dock/warehouse space. We run a regional hub and spoke, so all the freight flows through our Burnaby facility, and then we deliver it to our satellite facilities where we have a lead hand with a small crew of team members in each of our facilities, so we keep it all in-house,” described Murji.

Argus Carriers has several dry freight services. “We do same-day delivery and next-day delivery to the island and to the interior and general freight. We do special handling, we do some short-term warehousing, and we do a little bit of pick and pack. We also have trucks that go across the border,” he continued.

Argus is one of the largest freight carriers in the Lower Mainland and Fraser Valley, with a fleet of approximately sixty trucks, giving it the resources to serve even the most demanding customers. In addition to its satellite terminals, Argus Carriers has a shop where its fleet can be maintained and serviced.

The company is both C-TPAT and PIP certified. Customs-Trade Partnership Against Terrorism (C-TPAT) certification means the company has been recognized as a low-risk trade partner, which gives it Free and Secure Trade (FAST) lane access and expedited clearance at the Pacific Highway land border crossing. Likewise, a voluntary partnership with the Canada Border Services Agency (CBSA) Partners in Protection (PIP) certification enhances border and trade chain security.

“We watch our national safety code very closely, and we have a good record. Our accident claims are very low, and we have a great insurance discount because of the way our drivers conduct themselves on the road. It’s excellent,” said Murji.

“The safety and quality standards – it all starts from day one,” said Murji. “We hire a driver; we put them in a uniform; we train them up, and then he looks around and sees the rest of the drivers taking care of the freight, doing their pre-trips, making sure that their vehicles are maintained.” At Argus Carriers, everyone keeps a watchful eye on the equipment, the freight and standards of care.

“We provide careers for people, whereas other companies provide jobs. We support them; we pay them fairly; we give them consistent work, and we make them feel that they’re cared for, and really that’s the culture we have,” he added.

There is also the possibility of career advancement, as Goodrich has proven in his career. Goodrich began as a delivery driver with Argus Carriers, and thirty-eight years later, remains with the company as its operations manager. Murji noted of career advancement: “That’s how you get people to stick around for so long.”

Despite changes in ownership, Argus Carriers has maintained its culture of quality and excellence. From its extensive hiring process through training, expectations are clearly defined.

Goodrich explained: “I will tend to follow up with them to reiterate what they’re responsible for in regards to C-TPAT – making sure freight matches BOLs, and keeping an eye out for oddities or contraband. I just go around and talk about safety in small groups with the guys out there. It’s an ongoing training process, and we keep them all involved.”

“We’ve got a really good breadth of skill set within our company, and our customers love it,” acknowledged Murji. “The customers really like the way that Argus treats the employees.” This is something he identified during the ownership transition. “We really pride ourselves on giving excellent customer service, and I think that’s what makes us different.” He ensures that every customer interaction with its drivers and warehouse team happens in a friendly and professional manner.

Though it has already been established as one of the largest operators in its market, with over one hundred trucks on the road between both Argus Carriers and Inter-Urban Delivery Service, Murji still has plans for future growth. He is making certain that the company does not take on too much while continuing to drive its legacy forward.

“There’s a lot of opportunity for us to grow our business, but I think for us, we just want to make sure that it’s continued and steady growth so that we can maintain the level of service that we have offered,” concluded Murji. 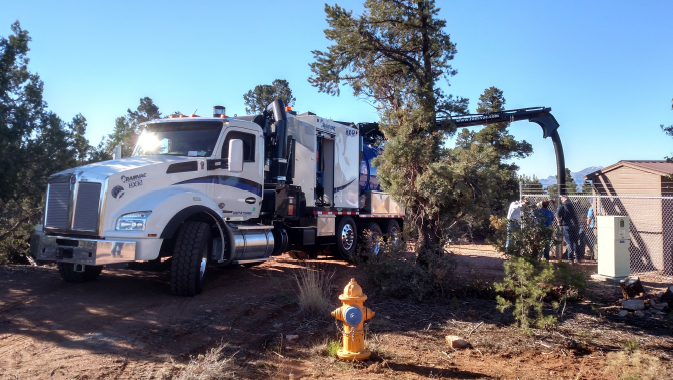 Cleaning Up the Competition