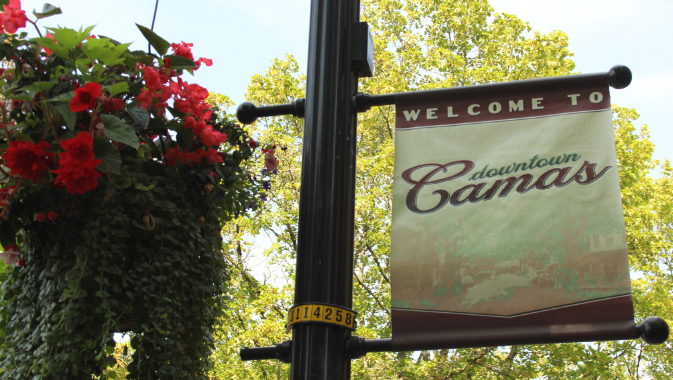 Camas is a town built around economic opportunity from its origin surrounding three lumber mills and a paper mill that remains the largest west of the Mississippi to the late eighties when the technology sector took the State of Washington by storm. Despite growing from lumber and pulp to technology and gaining thousands of citizens, Camas retains its hometown small town feel. Paul Dennis and Scott Higgins spoke to me from their offices in city hall.
~
Paul Dennis got ‘tricked’ into being on the city council in 1997. He was volunteering downtown, and a vacancy opened. Then, in 2003, there was a mayoral election, and the voters decided they wanted to make a change. So he served as mayor from 2004 through 2011. Now Paul is the chief executive officer of the Camas-Washougal Economic Development Association, which is a group project funded by the city of Camas, the city of Washougal and the Port of Camas-Washougal. Current Mayor Scott Higgins began serving on city council in 2002 and in 2011 won his first term as mayor.

“There’s a strong sense of community. We love to gather together downtown where we have numerous festivals. Our schools produce some truly legendary sports teams as well. Camas doesn’t believe it’s as big as it is. People like to think they live in this close-knit ‘Mayberryesque’ little community, and then they do things that reinforce that.”

Even tripling in size since the 1980s has not diluted the strong Norman Rockwell all-American feeling that pervades the Northwest town. “We have some of the best schools in the state. There are probably not many private school systems that can rival what we provide. We hear that from a lot companies that have relocated here.”

The town has one-third of its total area reserved for parks. “What makes us special is maintaining that small town feel where everybody’s your neighbor while remaining pro-business. The bigger we get, the harder it is to cling to that core value of small-town Americana.”

Not only does Camas feature scenic parks and abundant recreation, but it also sits a stone’s throw from Portland, Oregon, a city widely recognized as a top cultural destination. “You get the advantages of a metropolitan lifestyle, but still feel like you live in this small town tucked away. During the week you can be in Camas strolling in the parks enjoying the sweet and simple vibe, but on the weekends go see a Trailblazers game and live that lifestyle too. So it’s the best of both worlds.”

Camas was officially incorporated in 1906, but settlement began in the mid- to late-1800s. The town is located adjacent to a wealth of natural resources that resulted in a couple of sawmills but also a paper mill by 1883.

“The sawmills burnt down, but the paper mill survived and became the identity of the town. In essence, from an economic standpoint, the community of Camas was founded by business and has over time been very pro-business.”

However, one hundred years after the paper mill was built, the decision was made to diversify the economy. The paper mill currently employs roughly five hundred people. To aid in diversification, sizable areas to the west of the city of Camas were annexed, and a technology park was built.

In the late 1980s, large technology firms started looking for places to build their offices and warehouses, and Camas was ready. “Among the first two were Underwriter’s Laboratory which set up a campus in Camas to serve mostly the Pacific Rim. Then we saw Sharp America come and set up two divisions. One was consumer products and the other was R & D.”

The population has expanded from about seven thousand people in 1989 to over 22,000 today. “We’re growing! There are a lot of people that like where Camas is at and like where we’re heading and want to be part of what’s happening here – both on the residential side but also on the business side.”

In 2008, the world saw its worst economic collapse since the 1930s, but Camas only suffered one year of recession before growing again. “That was due to planning. We brought in a major corporation called Fisher Investments who manage high-value portfolios, and that helped enormously with the diversification of the economy. Here in 2016, I’d say Camas has experienced as much if not more growth than what was occurring just before the downturn started. It looks like 2017 is going to be an even better year.”

The people that serve on the city council as well those who manage the city’s affairs, live and raise their families locally. “We have a saying here that we do things the Camas way; we do things differently, and we’re okay with that. I think our city employees buy into that. Just for one example, we still have local sanitary truck drivers. We’re one of the few cities that still collects their own garbage; everybody else contracts theirs out now.

“We run our own, and one of the reasons we run our own is because our crews know the community. If some little old lady can’t get her garbage to the curb, they’ll get out of their truck and go get it for her. If someone forgets to put it out and they know it’s unusual, they’ll go to the door and ask, we call that the Camas way.”

Camas was recognized by Money Magazine as the 63rd best place to live in America and one of the top ten places to raise a family by Family Circle Magazine.

“Half of our property taxes that we collect every year go to fund K-12 education. Education is at the forefront for our community, and we don’t have to struggle to find resources. Probably our biggest advantage from a municipality standpoint is our ability to meet the timeline for development and provide necessary infrastructure.

“The Camas way means making sure everybody working for the city knows that the citizens are the customers. Through building and development, the police and fire department we maintain this mindset. Even when that creates conflicts we try to keep that perspective. Your job is not to try to find a way to say no, your job is to work with customers to figure out how to get to yes.”

Being home to so much high-tech, Camas is not surprisingly moving confidently into the digital age with a cutting-edge presence in cyberspace. “We’re pretty integrated now. We do everything digitally as far as our information packets go. We live-stream all our meetings out on the Internet, and just in the last two years, we finally got into social media, and we have a Facebook and Twitter and YouTube channel.”

The town has a mobile app for iPhones and Android and citizens use this to report electrical outages, street potholes, and other municipal matters that need attention. Community events are featured on the Facebook page, and the city works to make this an interactive experience. “People comment and we work on it or try to explain it.”

Like all successful communities, Camas is willing to put its ‘money where its mouth is’ and invest in itself. Around 2000, the library system was expanded when voters indicated that was a feature they wanted improved. The library is much bigger than those in communities of similar size. “One of the things I’m proud of is that we got to build a lodge on Lake Lacamas. We had a community space that we had prepped for something, but we didn’t really have a plan. I’m proud of the trails that we have built over the years as well, that are being added to on a regular basis. You can walk or ride your bike for miles and miles.

“If you go to a Friday night football, you can easily have 4,000 or 5,000 people attending the game. That rivals any similar city anywhere. We have one of the top teams in the state year after year. In fact, we won the state championship in 2016.”

Camas has earned a reputation for working with business to make it easier to locate and grow there. “When Logitech located in the community, it took only six months from the time plans were drawn up to the keys being dropped off, and not too many communities can turn that around that quickly.

“There’s lots of opportunity in our community whether from a citizen’s standpoint or a business. You’ll get the red carpet treatment either way.” 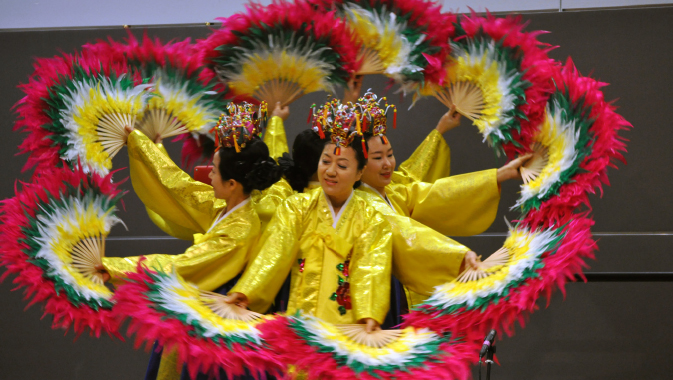