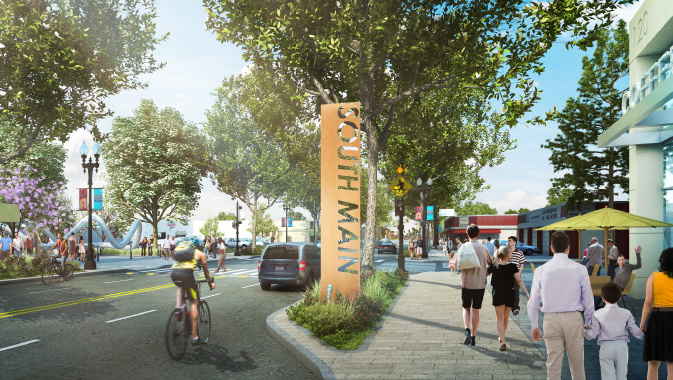 The City of Santa Ana is a vibrant, young community located in Orange County, California. Santa Ana benefits from proximity, diversity and a unique and collaborative approach to growth and development…
~
From its economic foundation to its community core, Santa Ana provides the leadership, services and support required to foster opportunity and growth.

Santa Ana enjoys the advantages of a pro-business environment with a highly receptive and responsive leadership that streamlines processes and engages in solutions that improve the climate for economic growth and community development to thrive.

The city is home to several landmark businesses, representative of a number of industry sectors. Companies like Crevier BMW, the number one dealer in the Western United States for the past 25 years, First American Title Corporation, Behr Process, and Rickenbacker International, to name a few, have all found success in Santa Ana.

Santa Ana is both business-friendly and eco-friendly. The city has adopted 27 hybrid/alternative fuel vehicles for its fleet, was recognized as a Tree City USA in 1998, commits more than $2.6 million annually for city-wide urban reforestation programs, and is dedicating future investments toward a regional transportation program.

Of course, community economic development is never without its challenges, but the city of Santa Ana has done its part to address these as they arise. A major asset for the city of Santa Ana is a commitment to strategic planning and the adoption of a vision plan that maximizes the city’s strengths. The city’s downtown is regarded as the downtown of Orange County and offers a space where progressive minds and entrepreneurial spirits can come to collaborate and shine. One of those people is Ryan Smolar of Downtown Inc., Santa Ana’s business district, an organization that works to leverage, market and recognize the downtown’s – and the city’s – full potential.

Smolar was asked what he believed to be Santa Ana’s greatest assets and he responded, “Downtown is a huge, compact, urban, diverse neighborhood that’s full of different food experiences.” He cited the examples of Hopper & Burr, a pop up café with nationally recognized baristas, Portola Coffee Lab, Playground’s flagship location which was ranked one of the Top 101 Coolest Restaurants in L.A., as well as many craft breweries that are located in the downtown.

“We have incubator kitchens where they cater and deliver small town meals: organic, paleo, gluten free. All types of creative food businesses are renting spots,” Smolar described. “We have a downtown farmers market, the only one in Santa Ana that is a chef-focused, hyperglobal market.”

The diversity in the people of Santa Ana is reflected in its culinary offerings. As Smolar pointed out, “There is also great Mexican street food. You can grab tacos from one of the many famous taco trucks. There are vendors with Mexican street treats that people who grew up here come back for years later. There is a very diverse food industry. Recently, we have had a lot of Asian restaurants coming in as well,” he said.

“The thing that is so great about downtown is that it’s a place for entrepreneurship,” noted Smolar, providing an example of an artist who showcased in a local restaurant which led to the opening of their own gallery and ultimately, career success. “We see really quickly that people are able to come here and connect with a lot of people in their industry, in other industries, to grow their talent and abilities.”

Smolar’s other job is related to food policy. “We are very passionate about not just [offering] hipster food stuff, but using local ingredients and working with the food justice community and young culinarians. We work directly with schools that are teaching the next generation of culinarians, so we really believe in the whole food system and being deeply involved in it all.”

Smolar credits the local school district and Santa Ana College for engaging with the youth in the community, investing in students to get them skilled and job-ready, while at the same time emphasizing the importance of participation in the arts and cultural activities, of which there is no shortage in Santa Ana.

A great example of Santa Ana’s collaborative and entrepreneurial spirit at work is actively demonstrated each day in the city’s many creative co-working spaces. These spaces are a living example of the real-life social network that has been created in Santa Ana and how those partnerships are materializing into economic and community developments that improve the quality of life for all.

Santa Ana’s 4th Street Market is located in the city’s downtown and is where food and entrepreneurship meet in a hub designed for progressive culinary ventures. The market is described as a place where food creators come to learn and grow and foodies come to enjoy the fruits of their labor. It features an eclectic mix of 15 vendors, seating for 300 and 10 incubator kitchens, East End Incubator Kitchens. These fully equipped commercial kitchens are available for rent and include access to a commissary, cold and dry storage, a packaging/labeling room, retail opportunities, a business center, and consulting services provided by Food Centricity, a food business accelerator.

Located in the downtown east end, the 4th Street Market highlights the neighborhood’s revitalized capacity and potential. Smolar acknowledges that, “For downtown to thrive, it has to be connected to strong neighborhoods and we’re not just concerned about how we look but how we connect to our neighbors and how can we help them.”

The South Main Street Corridor (SMSC) is another unique and historic business district located in the heart of Orange County. A South Main Street Vision Plan (SMSVP) has been drafted to provide a creative and implementable vision for South Main Street. The plan is to develop a highly connected and walkable downtown core.

The South Main Street Revitalization Plan was the vision of multiple stakeholders including Gensler and UCI. Kimberly Graham, co-managing Principal for Gensler’s Southwest region, provided some insight into the origins of the project and detailed the plans moving forward, which includes major physical improvements.

“The project inception actually started before the city of Santa Ana was involved. Gensler has 47 offices and in 2009 took it upon themselves to look at their own communities through a town square initiative,” she explained. “So, we’ve selected the Main Street Corridor of Santa Ana and we created a vision.” Gensler has been awarded AIAOC’s Design Awards, Citation Award for the project.

“We basically started this project with six guiding principles and supporting the community vision, we wanted to make sure we enhanced the neighborhoods, culture and identity,” said Graham. “Connectivity, mobility – the city of Santa Ana has been working on [these things] for pedestrians, transit users, cyclists.”

The plan includes ways to enhance environmental sustainability. The first step will be the addition of approximately 100 trees along the streetscape, helping tie the vision together and improving safety, security, and livability in the process. Gensler conducted community surveys and allowed the project vision to grow organically to best reflect the wishes of the public.

“With the city group, the planning and economic development, they were all very proactive and on board with trying to create the catalyst for change very quickly… The city got on board and actually looked to find additional funds to come up with the $7.5 million figure,” said Graham of the city’s efforts to expedite the funding and investment. Project completion is expected by 2020with a bulk of the work to take place over the first three years.

“We felt very strongly about the area because of all the great things that have already started to happen in downtown Santa Ana,” Graham acknowledged. “It felt like this void between things that were happening and we thought this could be the connector to become the heart of Orange County.” Planning for this project began in 2008-2009.

The OC Streetcar project is another highly anticipated endeavor that stands to greatly improve the quality of life and connectivity for Santa Ana residents.

The OC Streetcar project is valued at $298 million and will supplement and support existing Metrolink service in the county. The streetcar will link Santa Ana Regional Transportation Center (SARTC) which offers regional rail and bus service to Harbor Boulevard/Westminster Avenue in Garden Grove. The OC Streetcar will connect with an additional 18 busses along the way, and operations are expected to begin in 2020. The project is currently in the design and engineering phase and will enter the construction phase from 2018-2020.

A lot of investment is taking place in Santa Ana, both in terms of monetary contributions and service. Collectively, multiple stakeholders are actively taking part in efforts to improve the quality of life and economic vitality of Santa Ana, making it a better place to live, work and visit.

The goal moving forward is more of the same, if more of the same means embracing innovation for the benefit of the community. Santa Ana remains interested in urbanization and building increased density in the downtown, making the most of the historic buildings and the vision for the future.