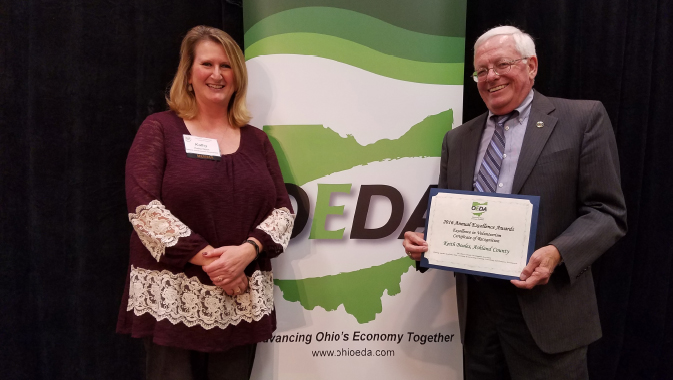 For decades, large industries and home-grown enterprises alike have taken root and flourished in Ashland, Ohio. With a unique mix of both affordability and accessibility, the county offers enterprises a gateway to strategic transportation routes and, most importantly, success.
~
Ashland has consistently ranked among the top micropolitans in the country in terms of the potential it has for business development. However, the area’s true credentials are proved most readily by the strong industrial footprint and the many thriving local businesses that call Ashland home.

Smack dab between Ohio’s biggest cities: Cleveland and Columbus, Ashland has a strong industrial history of businesses that rely heavily on interstate accessibility whether it be road or rail. But if you are more of a jet setter, that is not a problem as the county is a stone’s throw from two international airports and several smaller regional ones.

Kathryn Goon, the executive director of the Ashland Area Economic Development explained: “Location is a big thing for us here; it is an important part of what makes Ashland a great place to do business.”

Ashland’s perfect location right off of Interstate 71 (the main roadway that connects the north and south of Ohio) has attracted businesses large, small and every size in between. Manufacturing firms have led the area’s economic development. This lineage has built a strong pipeline of infrastructure and skilled workers.

When it comes to manufacturing, Ashland’s existing supply chain of businesses has made it an advantageous hot spot for ancillary companies. While manufacturing and pumps remain industrial pillars, leading publishing companies, retailers and healthcare facilities also play a significant role in the economy.

Accessibility is important, but it is only one element of the Ashland advantage. Its beneficial geographic location is one of luck, but when combined with the affordability of the area, it creates an unbeatable recipe for success. Ashland continues to rank amongst the most affordable counties in the nation, bringing in businesses and families.

This low cost of living is what ultimately separates the area from other equally accessible regions. CBS Money Watch ranked Ashland tenth in the country for affordability in 2012 and 2013. Today, the cost of living remains 14 percent lower than the national average. On top of these economic benefits, Ashland offers generous tax incentives and business development support in the form of both state initiatives and local programs.

In the twenty-first century, the route to business success for home-grown operations is more challenging than ever. We so often hear about the uphill battle of businesses fighting to stay afloat amidst a sea of multinational giants. Ashland, however, is a case study in the business potential that still exists for local enterprises. This strong local business community proves that with a lot of hard work and the right support business people with a dream can still make it. Ashland Area Economic Development (AAED) is leading the way for economic growth throughout the county as they focus their efforts on attraction, retention, expansion, and entrepreneurship. The organization’s newest initiative is “Grow Ashland.”

“The level of customer service and relationship building that has taken place between AAED and our manufacturers, over the last five years, is truly unique to the industry. Our team goes above and beyond for each and every company,” said County Commissioner and AAED Board Member Michael Welch.

One of these companies is Crazy Monkey Baking. The firm started out in the home kitchen of a local mom. Wanting to serve her children granola because of the health benefits but finding it messy and inconvenient as it fell apart in their hands, Teresa Humrichouser, the Crazy Monkey founder, baked up innovation. Crazy Monkey is somewhere between a cookie and a granola bar, sticking together to accommodate tiny fingers but maintaining all of the health benefits of granola.

The quirky and delicious creation has become a popular option for moms across the country. Crazy Monkey Baking has evolved from that local home-based kitchen, making a national name for itself. The local business has seen success after success, and now, Crazy Monkey is in almost every state as well as many Ohio-based grocery stores. What started out as a “Cottage Food Production Operation” under Ohio law in 2009 has now turned into a commercial bakery operation, licensed by the Ohio Department of Agriculture.

Shelby Joes, Inc is a new manufacturing company to Ashland County. They produce Shelby Joes Sloppy Joe Sauce for local convenience and grocery stores. While they have only been making the product for a little over 2 years, their sauce can be found in 24 stores. This husband and wife team consists of Shelby Joe and Brenda Lee Cutlip. The recipe originated from Shelby Joe himself as it has always been a family favorite to enhance a ground beef entrée.

Home-grown businesses have played a fundamental role in Ashland County’s evolution. The diversity is truly the area’s greatest economic strength and a testament to the business-friendly attitude that is at the core of its development. Publishing is an industry that has faced hard times in the last ten years, but Truax Printing, Inc. a family-run business and a staple of the area, just celebrated its 50th Anniversary this year.

Truax Printing, Inc. was founded in 1966 by Jon and Sally Truax in Loudonville, Ohio. Since then they have grown from a small commercial print shop and newspaper to a true full service commercial print shop and book printer. While continuing to be a family owned and operated business, they have never lost sight of taking care of the customer first.

Mayor Steve Stricklen, Village of Loudonville, said that, “Over the years Truax Printing has created jobs, grown and thrived in a small community. The family all worked together to grow and expand the business to the point they had to expand to Ashland (the City). The family is involved at the community level as it sponsors sports teams. The Matriarch of the family, Sally Truax, has been a member of MAGF (Mohican Area Growth Foundation) for years.”

Uniontown Brewing Co. is a prime example of this entrepreneurial drive and a great spot to grab a drink. The newest member of the downtown area, Uniontown Brewing Co. gives visitors a menu consisting of local ingredients, beer-infused dishes and, of course, excellent beer. Its name refers to the old title of the area, and its owners are local residents who hope to bring some flavor to the newly revamped downtown. With a built-to-specification five-barrel brew house, this new gem proves that this is a place where entrepreneurial opportunity is only one of many attractions. Uniontown Brewing Co is only one of several businesses that have been housed in the former McNulty House. This 158-year-old building began as a first-class hotel before becoming a funeral home, chapel, and eventually a furniture store.

Ashland Main Street Executive Director, Sandra Tunnell, said, “Ashland Main Street has seen exponential growth in the city core since our downtown revitalization organization began in 2011. In five years, occupancy in downtown buildings has gone from 75 to 91 percent. We have gone from hosting two events in downtown in 2010 to 25 in 2015. Our downtown has gone from somewhere you drive through to somewhere you want to stop and visit. We recently won a highly competitive State of Ohio grant to help our downtown building owners improve their buildings. This, along with our downtown being named to the National Register of Historical Places, makes owning and maintaining a building in Ashland’s downtown an excellent investment opportunity.”

“It’s been great to see the new businesses and events taking place on Main Street. We are fortunate to have a group such as Ashland Main Street to facilitate and develop the downtown area. We all know that it takes a lot of patience, blood, sweat and equity to revitalize an area,” said Mayor Glen Stewart, City of Ashland.

Work and play strike a balance here, as some of the best views in the region meet a wealth of outdoor tourism and recreation opportunities in South County. The Mohican area is the second-most popular tourist region in Ohio, attracting over 500,000 people every year. The area is recognized internationally for canoeing, hiking and biking and boasts elevations that top over 10,000 feet. Ashland County is responsible for drawing in millions of tourism dollars to Ohio each year. The area has been a popular destination for tourists seeking an offbeat adventure for decades, but with the growing popularity of a new and unexpected attraction, tourism is expanding more quickly than ever.

Georgia Kauffman, Executive Director of the Mohican-Loudonville Visitors Bureau, said, “It is easy to promote one of the largest industries (Travel and Tourism) in Ashland County when you have quality businesses, attractions, and partners. Businesses want to invest in area when it is easy for the employees and customers to have something fun to do. That is what we have to offer in the Camp & Canoe Capital of Ohio.”

Landoll’s Mohican Castle is hands-down one of the most unique places to visit in the nation. One of the only castles in the US, the facility provides guests the once-in-a-lifetime opportunity to sleep and explore Game of Thrones style. With seventeen rooms – each with its own name – it is no surprise that Landoll’s has attracted swarms of visitors.

Matthew Scruggs, Assistant GM, said, “Enjoy the stately majesty of times past in a luxurious castle. Located in central Ohio, deep in the heartland of Mohican country, the estate offers unprecedented luxury in its lodging and seclusion.”

After a visit from Gordon Ramsay’s ‘Hotel Hell’ in 2016, the castle has reached new heights of popularity with international visitors. Not surprisingly, countless weddings and other events poured in, with some booking years in advance. Hosting accommodation, events and dining options, Landoll’s is quickly becoming Ashland’s biggest attraction, a sentiment echoed by Gordon Ramsay who claimed that Landoll’s was the only hotel of the type he had ever seen in the United States.

Jimmy Landoll, General Manager, encouraged, “Enjoy a stay in one of our uniquely designed suites. The Castle is composed of eleven suites, while the Highland Building has four suites with the option of adjoining rooms. Also, there are two cottages located near the Castle and Highland Building. All overnight guests are provided with a complimentary light continental breakfast in the privacy of your room.”

“Landoll’s Mohican Castle has proven to be an essential partner for the Mohican area. Guests look at Landoll’s Mohican Castle as a destination. Their events are an additional aid in growing the overall economy of the Mohican area. The owners have and continue to offer help to increase the $156 million Travel and Tourism industry in Ashland County,” said Georgia Kauffman.

Mayor Stricklen commented that, “They have already had a huge impact on the community. They draw people from all over Ohio and the United States. Going to the restaurant and taking out-of-town guests for lunch or dinner, they are amazed. These same people return with their families. People come back astonished at what we have in the woods.”

Ashland has had a very successful few years, but a closer look at the area’s development plans shows that growth is just beginning. In the next year, massive development of the downtown will continue. The results are projected to bring in both businesses and visitors. Furthermore, the investment in the development of the corridor right off Interstate 71 will see a range of food and retail franchises, including some brand new names to the region. Ashland’s existing business park continues to facilitate new growth, providing further expansion opportunities for firms looking to relocate in the next year. 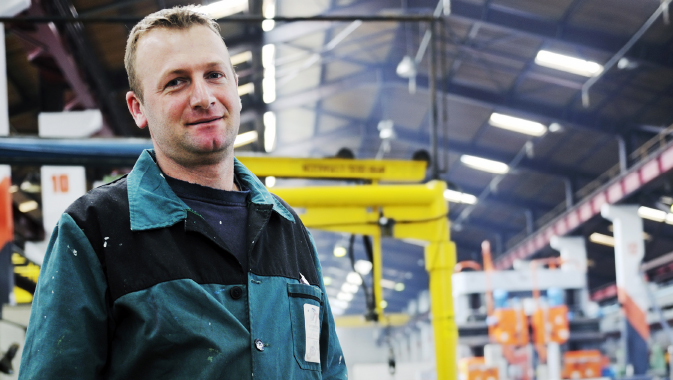 Building on its Assets