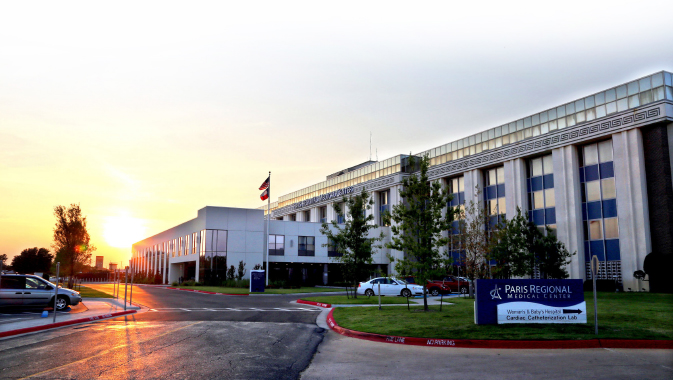 Ninety miles from the urban density of Dallas, Texas lies Paris, a midsize town of some 25,000 souls at the nexus of the old railroad and the Red River that divides the lone-star state from neighboring Oklahoma. At the heart of this down-home community immortalized in Wim Wender’s film of the same name is the Paris Regional Medical Center.
~
The Center’s CEO Patti Monczewski was quick to ‘humble brag’ about her town’s illustrious past. “Paris has a very interesting history. Back at the early 1900s, Paris would have been the Dallas of the time. Then fire destroyed the community over a hundred years ago.”

Patti, the Center’s first female CEO, explains, “When the city was almost destroyed, it was sort of abandoned. It was in a rebuilding phase until the fifties and sixties when it became a boomtown again – at least booming for rural Texas. But we have a very strong medical community; we had two hospitals –one was a Catholic Hospital and the other McCuistion Hospital and they ended up being consolidated and sold to a for-profit organization in the early 2000s,” said Patti.

“Then the decision was made to consolidate from two campuses to one, and that is where we are today. We have 152 licensed beds here, and then we have another location where we have twelve general psychiatry beds. We lease one floor there to a long-care company. We have a lot of specialties and obviously primary care, and we provide medical services to probably between 80,000 and 100,000 people,” Patti explained.

“We are the largest regional hospital between Dallas and Oklahoma City, but we have two similar competitors. However, we offer a broader scope than they do. They are between and thirty and forty-five miles away from us, so we are really the beacon of healthcare in Northeast Texas and Southwest Oklahoma.”

Patti was eager to list the numerous competitive advantages their hospital enjoys. “We have neurosurgery; we have cardiovascular surgery; we have infectious disease treatment, and we have interventional radiology and rheumatology – none of which our direct competition has.”

Keeping on the cutting edge of modern medicine is no small task anywhere in the world but attracting highly skilled people to the Texas countryside can be especially difficult. “Recruitment and retention can be challenging for us. We often get new graduates, and we train them, and after we’ve invested time and money in them, another medical center comes along and entices them to go and work in the big city. What’s interesting though is that they sometimes end up coming back to Paris, but living in a rural community is not for everybody,” Patti explained.

“We just started a program where we take brand new nursing graduates, partnering with Parallon (a Tennessee company that serves the medical community) and provide thirteen weeks of training – both didactic and practical preceptor training where they go to a simulation lab. This program is really the equivalent of eighteen months of orientation. Our first group of fourteen new nursing graduates will finish in the middle of October. Our training helps them be prepared for each specialty that they’ll be working in, to provide the specific care of those patients that are unique to that department. We also have a junior college here where we take graduates for radiology and other specialties. We like to train them and keep them.”

Despite its down-home feel and rural location, Paris Regional Medical Center works hard at integrating the most state of the art technology available. “We will be partnering with Air Evac to build a facility that will have a helicopter pad here on our campus. Last year we received our chest pain accreditation with PCI (Percutaneous Intervention, formerly known as angioplasty with a stent). We are in the process of working towards our trauma Level Three designation and our Texas Ten Step designation in obstetrics, which less than ten percent of Texas hospitals have earned,” said Patti.

“Our surgery team also completed a staggering one thousand Da Vinci robot operations in less than two years, which is amazing for a hospital with one robot. We’re the only hospital in Texas that achieved that sort of volume in that short a period of time. Da Vinci robotics is a minimally invasive technique, where a tiny robot, using proportionally tiny instruments, makes a very small incision, much smaller than human hands can make.” Patti’s voice glowed with pride as she described this technology that sounds like science fiction and not the day-to-day operation of a rural southern hospital.

She added, “I just spoke with two ladies who had procedures on Thursday and were back to work on Monday, and they had total hysterectomies. You would never expect in this small community surgeons would embrace this kind of technology so wholeheartedly. Also, they use Da Vinci robots in facilities around the DFW metroplex, so we love to tell our patients that we can offer this very advanced technology too.”

In medicine, your customers may be going through one of the most challenging phases of their lives, and making them feel comfortable and optimistic is paramount. As Patti emphasized, “we like to treat our patients like family. We are a small community, so often times, we actually know our patients already when they come through the door. One of the initiatives that we have here is a Patient Experience Coordinator. We also have two special Patient Experience Nurses that check in on our clients every day, asking them if there are any problems. They then navigate through the issues and follow up with the department leaders to make sure they’re taken care of. For instance, if we found out they had an issue with a meal they had that morning, or if they were too warm or too cold, we get whatever we need to address the problem into the room, or we get the dietary director to come and actually visit with the patient. We want to exceed their expectations, and if we can’t, we want to know how we can.”

However, it is not only in-hospital patients to which Paris Medical extends care but all the people in the region. “Last year we started a program called ‘Healthy You’ to educate our community about health and wellness. We put on free seminars where we have one of our physicians speak; we’re actually having one today about cholesterol. We are also taking our Healthy You program into industry. We have a business development specialist that goes out and educates employees on how to utilize their insurance benefits for preventive care and disease self-management, providing wellness exams, blood pressure clinics or health fairs or bringing a physician out to do a ‘lunch and learn.’ We also partner with local businesses to sponsor events that raise money for local charities.”

The marketing of a hospital in twenty-first century America has to include a healthy dose of Internet and social media, and Patti had a lot to say about both. “Throughout the last couple of months, we have started rolling out information about different services we offer here at the hospital. These campaigns typically involve a patient that has been cared for here telling their story. We are working on producing commercials for them and putting their faces on all of our billboards. We get word about these patients, and then we get a testimonial that we typically share on Facebook. We also use the Healthy You content on our social media to promote health and wellness generally.”

But it is not all business at Paris Medical, as Patti emphasized by recalling some of the hospital’s more joyful events. “We also do fun things too. For Valentine’s Day, we passed out chocolate-covered strawberries for our families and staff, and we took pictures and posted that on Facebook. We try to use social media to promote the relationship between hospital, community and patients, and this method is increasingly becoming one of our primary ways of marketing. Starting in November, we’re going to have an exclusive section of a local magazine called Paris Life… So we’re very excited about that.”

I asked Patti what she wanted our audience to take away from the interview. “We have regional in our name,” she shared, “and we’re committed to making us that star in the corner of our world that makes people say I want to go there for my healthcare!” 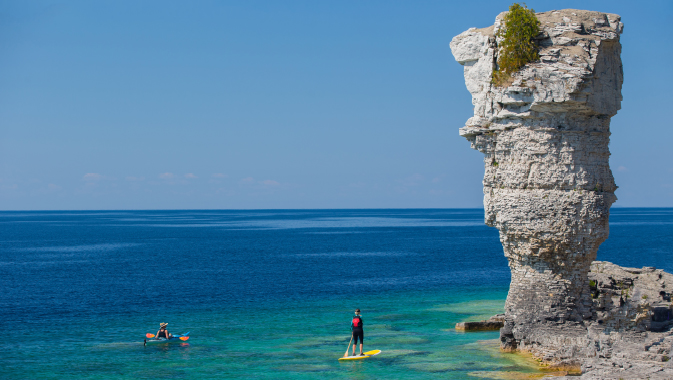 Find Yourself in Bruce County