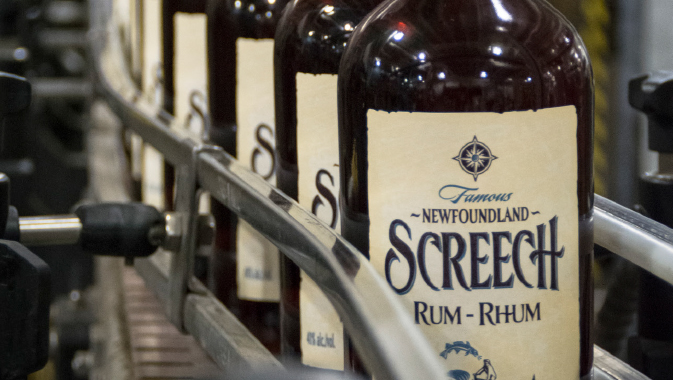 Newfoundland and Labrador, the most easterly province in Canada, is one rich in cultural traditions and heritage. The province is recognized internationally as a friendly and welcoming community and its people are proud of their land – its unique beauty, its quality of life and its bright outlook for the future.
~
Newfoundland or ‘The Rock’ as it’s affectionately called, continues to attract attention on a global scale as being one of the most competitive places to do business in North America, as evidenced by a recent KPMG Canada report. Its capital city, St. John’s, is showcasing its ability to do just that. The city is headquarters to the Newfoundland Labrador Liquor Corporation, an entity that has a longstanding history of ‘getting it right’ when it comes to service, quality of product, and customer satisfaction.

The NLC’s Rock Spirits manufacturing division owns, bottles, blends and distributes 12 (and counting) of its own spirit brands, which include rum, vodka, gin, and whisky. Rock Spirits also partners with other customers to produce five global spirit brands.

At one point, other provincial liquor corporations also acted as bottlers, but today Rock Spirits is the only facility in Canada operating in the aforementioned capacity and employs between 45 and 50 individuals depending on seasonality. NLC operates two facilities at its St. John’s location – a 77,000 square foot retail warehouse and its Rock Spirits facility.

Charlene Hounsell, NLC’s Sales and Marketing Manager indicates that, “We represent most of the major segments in the alcohol industry, rum being our strongest focus. In fact, Rock Spirits accounts for eleven percent of all dark rums consumed in Canada.” She also notes that of the 12 brands owned by Rock Spirits thus far, there are a few core brands that are worthy of mention, specifically Newfoundland Screech Rum, Rock Spirits’ flagship brand. This dark rum is “our oldest brand and is sold in all Canadian provinces, the northeast United States and now in Germany.”

Famous Newfoundland Screech Rum is the number one selling dark rum in Newfoundland and Labrador. Imported from Jamaica for over 200 years, this rum is aged for 18 to 24 months and is a true part of Newfoundland culture and tradition. This award-winning brand has received Gold Medals in 2014 at the Wine & Spirits Wholesalers of America (WSWA) convention in Las Vegas and the Craft Spirits Awards in Los Angeles. The brand also won a Double Gold Medal, the highest possible achievement, for Best Dark Rum at the San Francisco World Spirits Competition in 2013.

Another core brand is Old Sam demerara (dark) rum that is aged for two years and distilled in the last operating wooden continuous coffey stills at the demerara distillery in Guyana. “Old Sam joined our rum family in 1999,” says Charlene. “This brand is very popular in the Maritimes and in western Canada, especially in British Columbia,” she adds. “It comes from the richest rum region in the world [Guyana] and this brand is very unique.” She explains further that Old Sam creates “a signature froth on the glass when mixed with cola, making it easy to spot a Sam drinker.”

Newly launched in 2015 is Old Sam 5 year old, an extension of the Old Sam original. It too is distilled and aged in oak barrels in Guyana. This brand is “a premium product with a blend of smooth light base rum and sweet, full-bodied pot still. We’re very proud of this new rum,” Charlene adds. “It’s been doing very well in Newfoundland.” Old Sam 5 is currently in Prince Edward Island and Alberta and making its way into British Columbia.

Rock Spirits’ George Street Spiced Rum is also a demerara rum from Guyana aged for five years. This rum is thirty five percent alcohol compared to the forty percent alcohol of Screech and Old Sam and is very popular in the spiced rum category. It was launched in 2011 and named after a downtown street in the heart of St. John’s with a two-block stretch of popular bars, pubs and restaurants – “the biggest little street in North America,” shares Charlene. George Street Rum is “the only spiced rum, as we know, to have an age claim, which we feel provides us with an advantage in the category.”

Commenting on the corporation’s own brands of rum, Charlene asserts that, “Our rum proposition is simple; we love our rum and we do it best,” reaffirming that these rums are aged in a tropical climate for two to five years which “allows the rum to marry better with the oak barrels, developing deep delicious notes on your palate. That’s what sets us apart.” All of NLC’s core brands “have unique stories, years of history, and high quality ingredients which keeps our customers loyal.”

Speaking about the company’s partnership with customers who own global spirit brands, Kristina Stevenson, Manager of Operations at NLC, indicates that Rock Spirits blends and bottles spirits for five customers. Rock Spirits works closely with these customers on both recipe development and packaging.

The many spirit brands which Rock Spirits partners with include Crystal Head Vodka, which they have been bottling since 2008, owned by Canadian actor Dan Aykroyd and John Alexander, an American folk artist who designed the bottle. Rock Spirits started producing Crystal Head in 2007, and the brand has since “turned into a global brand,” says Kristina. Rock Spirits produces the vodka and exports the product to 28 countries worldwide who then distribute to other countries. “It’s actually sold in sixty or more countries now,” she adds.

Because Crystal Head has a unique bottling design, it is one of the most challenging for Rock Spirits’ production line and had been a more manual bottling operation until 2013 when Rock Spirits introduced an automated line. The company has the capabilities to handle unique bottle designs and fill different bottle sizes that include 50 ml, 700 ml, 750ml, one litre and 1750 ml.

Crystal Head sold more than three million bottles in its first four years of production. The vodka is produced in Ontario and is distilled from corn. It is transported to Rock Spirits at high strength where the vodka is blended with Newfoundland’s pure water according to its recipe to the required alcohol strength. It is unique for another reason – it has a filtration process that involves Herkimer diamonds, the last step before bottling. “Mr. Aykroyd swears that it adds a little special something,” adds Kristina.

With respect to customers, Rock Spirits’ largest and longest standing relationship is with the Canadian Iceberg Vodka Corporation and their line of products; a relationship that has existed for over twenty years. Iceberg produces vodka, gin, and silver and gold rum. The Iceberg brand is internationally recognized and shipped to the United Kingdom, South Africa, the United States and is sold extensively in Canada. “It’s a very well-known brand,” confirms Kristina.

Iceberg brands are as unique as the name suggests. It was developed and initiated at the Rock Spirits facility and is produced from portions of icebergs that make their way down the Newfoundland coast. Iceberg has a harvester who transfers the glacier ice onto a barge and brings it ashore where it is then melted. Once melted, the glacier ice water is transported by tanker truck to Rock Spirits for blending.

Speaking to its relationship with customers, Kristina suggests that, “For us, cooperative relationships are essential to our success; any manufacturer would say the same.” These relationships with customers ensure “a quality product is delivered to the customer on time, meets their targets, and ensures that any quality issues get resolved.”

Every customer of Rock Spirits has a recipe and a standard that is crucial to their success, and Rock Spirits’ staff assures that quality control is maintained through every step of the production process – that all criteria are met. “Anything that appears to be non-conformity is addressed immediately,” she stresses.

“As with all of our customers, the recipe development is all confidential. It is based on working with our blending staff here and depending on what outcome the customer would like to have, the recipes can be quite unique,” says Kristina. To this end, staff in the blending department and two quality control technicians utilize nineteen blending tanks to safely ensure the mixtures are just right; meeting the high expectations of taste and quality from ever-discerning consumers.

Rock Spirits also proactively involves itself in brand development, including recommendations and assessments of new packaging, and assists clients in forging relationships with other suppliers and in recipe creation. “We are not a large facility but we are certainly considered a world class bottling facility,” continues Kristina, with comprehensive tech support, technical product blending, and experience in safety, international quality standards, and regulations.

For example, Rock Spirits is adept at operating high and low volume customized packaging lines, pressure sensitive labelling, multiple bottle styles, and tamper evident closures. “We’ve made purchases every year or every other year of different technologies to stay ahead of the pace of the market trends.” As well, the corporation regularly conducts market research to identify “any upcoming trends for consumers,” explains Charlene. “Right now there’s a big trend for bourbons and whiskies. We’re seeing more people buying more premium products.”

She also notes that extensions of its Newfoundland Screech brand were Screech Honey and Screech Spiced. “We were the first supplier to offer honey rum in the market,” a trend started by honey whisky. Rock Spirits “took the plunge and came out and introduced Screech Honey. So it’s a continuous process for us on the marketing side too; consumers’ interests change and we try to stay above the trends. The selection for our consumers now has reached another level so there is greater competition.”

Although traditionally a dark rum company, the export of vodka has become a large market for Rock Spirits. Newfoundland Screech is also finding a home on the global scene with the export to a distributor in Germany in 2015. How well the product will be accepted there is left to be seen as it can take years to introduce a new product to a market. “We’re receiving positive feedback and getting global enquires more frequently on social media. We’re hoping that we’ll get another container to Germany soon, and introduce Screech to new markets,” Charlene adds.

Wally Dicks, Vice President of Supply Chain Management, explains that, “We have products in over sixty countries around the world. They’re all products produced here in Newfoundland and Labrador which is a small island in the Atlantic Ocean. There are fewer than two hundred countries in the world, so we’re roughly in thirty percent of the countries in the world… We’re pretty proud of it.”

As for any challenges Rock Spirits faces, Wally contends that, considering the province’s island geography, logistics can be an issue, but not an insurmountable one. After all, the corporation has proven itself to be an innovative and proactive entity prepared to meet any challenges that may come its way. That’s just The Rock’s way.

“We treat all brands as if they’re our own brands. Our customer service is number one and our customers say the same thing,” he adds. “As a result, that’s a big part of the value proposition for Newfoundland products,” adding that in the last eight years, production has grown fifty five percent. “We’re definitely proud of that. Our plan is to continue to do that.” 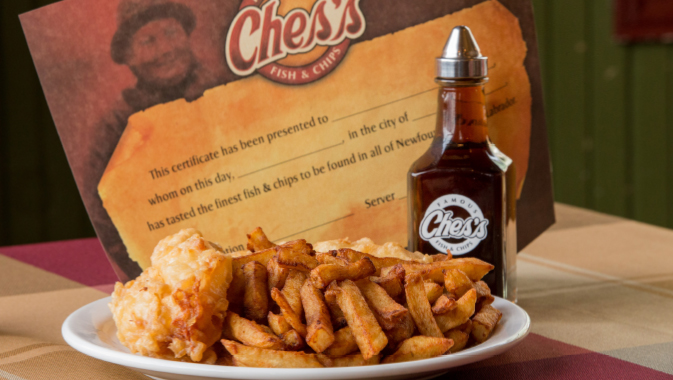