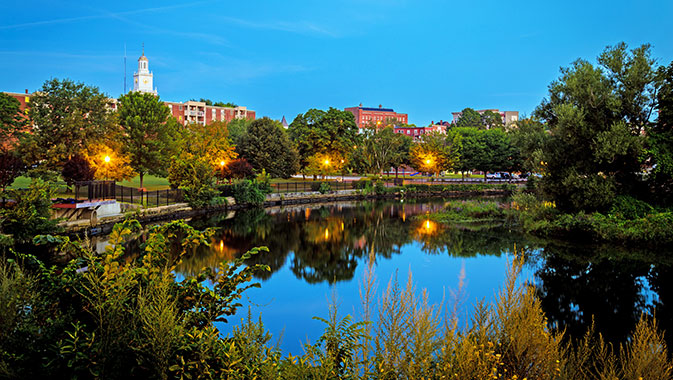 When businesses are considering establishing a presence in a new area, or relocating to a different location, there are many things to consider – from access to roads, rail, and airports, to business parks, proximity to major centers, and the ability to draw upon a skilled talent pool of potential employees. There are, however, other key aspects to quality of life, such as good schools, safe streets, and a vibrant downtown. All of these amenities and many others can be found in the historic City of Dover in New Hampshire.
~
Ranked one of the Top 100 Places to Live by CNN/Money Magazine and located in one of New England’s most desirable areas, Dover is the fastest-growing city in all of the state of New Hampshire, for very good reason. With its prime, scenic location less than an hour’s drive to the White Mountains and the beaches of Lake Winnipesauke or the Atlantic Ocean, close proximity to Boston, an educated workforce, three industrial parks, tourist attractions for all ages, outdoor activities and attractions, and The University of New Hampshire just minutes away, Dover is a year-round place to work, live, and play in an environment meeting rural, urban, and suburban needs.

“You can be in Boston in 55 minutes, have Wi-Fi going and coming, and don’t have to worry about parking a car or what it costs,” says Daniel Barufaldi, Director of Economic Development at the Dover Business and Industrial Development Authority. “You can be anywhere in Boston in very short order.”

With a population of approximately 30,500, Dover is a two-time winner of One of the Nation’s Best Communities for Young People (America’s Promise Alliance), and has the youngest median age population of any municipality in New Hampshire – a little over 37 years, an important consideration for long-term sustainability. Popular with Millennials and persons of all ages, Dover is known for its many fine-quality restaurants, retail shops, and tourist attractions, many easily accessed on foot.

Rooted in history
Settled in 1623, Dover is the oldest permanent settlement in New Hampshire, and after almost 400 years, much of the area’s history still exists. With three rivers and a waterfall in town, one of the earliest businesses back in the 1600s was a sawmill, used to build the settlement. Soon, this was followed by a huge influx of people coming to work in textile mills. Today, these same mills are prospering once again as 21st-century businesses, residences, and homes to artists. As Dover likes to say, ‘it’s the state’s youngest oldest city!’

Fostering a unique mix of manufacturing, retail, arts and crafts, restaurants, tourist attractions and more, Dover’s unique waterfront is the result of groups working together for the betterment of businesses and residents alike. Much of the area’s success comes from the formation of close working relationships among Dover’s Office of Economic Development, the Greater Dover Chamber of Commerce, and the Dover City Council. “The groups share a common goal of creating, preserving and promoting a sound environment for existing and prospective businesses,” says the City. “The community is ensuring future generations are up to the challenge of perpetuating economic prosperity in Dover.”

Welcoming of new businesses and assisting existing ones, Dover remains committed to future growth and economic sustainability. “Over the last 20 years, in the Enterprise Business Park alone, we’ve brought in 15 businesses, about 750 jobs, and that is still growing,” comments Barufaldi. A million-dollar bond put up in the past for land and infrastructure has not only been paid off, but netted $2.4 million. Today, it is contributing $505,000 in tax revenues annually, as well as helping to create good jobs.

Always mindful of future development and committed to commercial and industrial growth, Dover has rezoned an area of over 400 acres to continue fostering its highly business-friendly environment. Additionally, the area has two Tax Increment Financing (TIF) zones, one downtown, and the other to help foster development of the Cocheco River waterfront. These initiatives – along with a 79E Community Revitalization Tax Relief Incentive and five economic recovery zones – have further bolstered Dover’s reputation as a business-friendly location. “If you bring jobs or add investment to renovate a building, you can get business profits tax or enterprise profits tax exemptions of $240,000 over a six-year period,” says Barufaldi.

Strength in teamwork
Serving three terms on the Dover City Council before being elected Mayor in 2013 and re-elected in 2015, Karen Weston has seen firsthand the strength and economic prosperity that comes from the City working in unison with the Dover Business and Industrial Development Authority. “When you have an organization that works well together as a team — I’ve been on the city Council for nine years, and these last two councils have probably been the most proactive city councils to date — it is our decision to vote for some of the funding, and the payback has been substantial to all of us. And when you have a team… you definitely move forward.”

Along with creating a tremendous environment for new businesses through strategic investments in infrastructure, much of Dover’s ongoing success is the result of ongoing cooperation between public and private sectors and an all-encompassing desire to create the best conditions to improve the local economy and quality of life. And in Dover, respect for existing businesses remains high. “We are very careful about retaining our businesses, because we understand it is much easier to retain a business than to lose one and have to go out and attract another one,” states Barufaldi. “It is more cost-effective.” When businesses arrive in Dover, the City and the Business and Industrial Development Authority find out if they need financial help or assistance with training or their business model. “We will provide that. We have people who provide business planning for them for free, so it’s a good place to be if you own a business. We take care of our businesses.”

Vibrant downtown and waterfront
Recognizing that life isn’t about work alone, the City of Dover has invested considerable sums into its downtown and waterfront area over the years. There are numerous shops, almost 30 restaurants catering to different cuisines, and a host of attractions. At night, there is a thriving nightclub and music scene; during the day, there are plenty of family-friendly places to go and things to see. Located in downtown Dover at the Henry Law Park is the two-storey Children’s Museum of New Hampshire, a fun and interactive spot for tots all the way to middle school-aged children which attracts 93,000 people annually. Throughout the year, there are also many fun events, from Pet-A-Palooza to the annual Fourth of July fireworks celebration, the summer’s Cochecho Arts Festival and a children’s concert series throughout the summer, an Irish festival, and the popular Apple Harvest Day in October.

From public pools to parks, an ice arena, numerous hiking trails offering striking scenic views of the City, and a great deal more, Dover literally has something for everyone. For art, science and history buffs, there is The Woodman Museum complex, home to an amazing collection of exhibits, artifacts, and curiosities including fossils, antique firefighting equipment, an original 1771 tax bill from King George to the citizens of Dover, and the saddle used by President Abraham Lincoln shortly before his assassination in 1865.

The “Miracle Mile”, meanwhile, is home to two major shopping plazas, incredible scenery, prime waterfront, a vibrant downtown, and every type of business from retail to advanced manufacturing and high-end service businesses. Dover not only attracts companies from other areas, but is experiencing success with home-grown industries. Graduates from the nearby University of New Hampshire can remain in the area, get a good, well-paying job utilizing their degrees, purchase a home, raise a family, and contribute to the vibrant downtown, because they have disposable income. “So we now have a self-nourishing system,” says Barufaldi of the area and its many business and lifestyle opportunities and amenities.

Promoting Dover through a number of means including print advertising, some regional trade shows, the city’s website and the Dover Business and Industrial Development website at www.locateindovernh.com, the City continues to grow. Existing leading businesses continue to thrive – such as Liberty Mutual, which employs about 4,200, and Measured Progress, which supports and assesses education and has won a $151 million contract with the State of Massachusetts. Stonewall Kitchen has a new state-of-the-art building, has hired additional staff, and will see a facility of about 279,000 square feet upon completion of all three phases.

Rand-Whitney Corporation, a member of the Kraft Group that also owns the New England Patriots, recently held a ribbon cutting for its new 89,000 square foot plant in Dover.

Dover has in the past year built a new 38,000 square foot police station and a new four decker downtown parking garage to service our merchants’ customers. “Going forward, we have just broken ground for a $40 million development at Silver Square which will include a high-end assisted living facility, a branch bank, a medical practice building, a restaurant and a boutique hotel.” In addition, Dover has recently entered into an aerospace alliance with aerospace companies around Montreal and is part of the Aerospace Consortia Transatlantic Partnership with the UK.

Highly pro-business, representatives from Dover will sit down with relocation companies who are interested in all business aspects, including total tax burden, cost of energy, proximity to markets, raw materials, and transport, which is then narrowed down to a shortlist of three. “And we are often on that shortlist of three, because of our quality of life and quality of place here,” states Barufaldi. “If we make the shortlist, a lot of the times we get the business here,” he says.

“It’s a whole different balance, because you go from the business aspects to the CEO thinking, ‘Do my wife and kids want to live here? Is it a beautiful place? Do you have parks and rec? Do you have quality of life? Do you have a low crime rate? Do you have a good school system, and good healthcare?’ And we can say an emphatic ‘yes!’ to all those things, so we have a real selling point. This is a great place to live.” 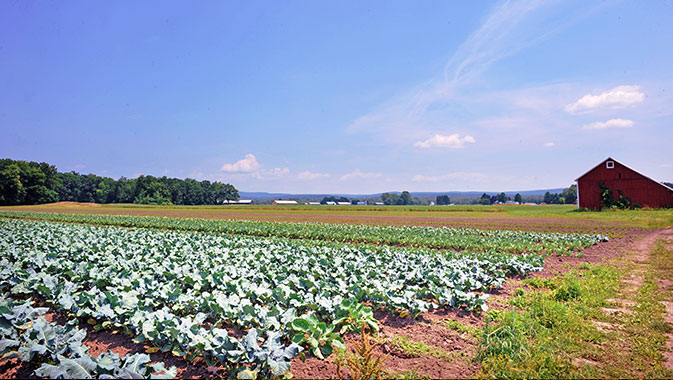