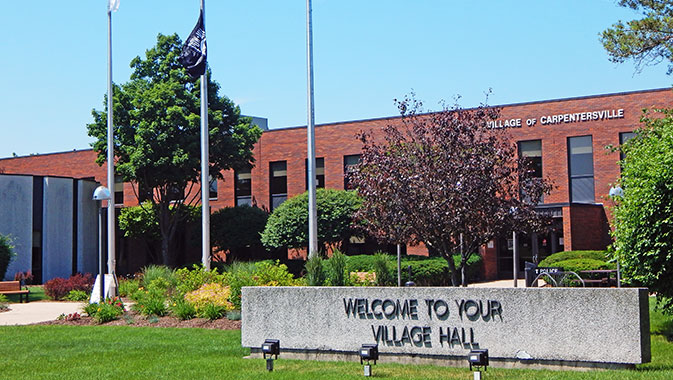 Carpentersville is a village in Kane County, Illinois with a population of about 38,000. The village has diverse economic development opportunities with some light manufacturing and a great deal of industry. Business in Focus spoke with Village President Ed Ritter and its Economic Development Director Patrick Burke to find out more.
~
The roots of Carpentersville date from 1837 when Charles Carpenter and his brother Daniel settled on the Fox River in what was originally called Carpenters’ Grove. Carpentersville grew to become a manufacturing hub.

Shortly after the Second World War, Leonard W. Besinger built the iconic Meadowdale subdivision and Meadowdale Shopping Center with its ice skating rink and movie theatres, and this was the place to shop for many years.

“There was an economic boom that goes with having a big shopping center. The Besinger family was quite unique; not only did they develop the center, but they also built a Le Mans-style racetrack back in the fifties and sixties that hosted huge crowds. It is now used as part of a county park,” says Ritter.

In the late forties to fifties, Carpentersville was a good place to buy an inexpensive home, and there has always been a large Hispanic population here, drawn by great options for affordable housing coupled with a strong manufacturing base that offered good employment opportunities. “A lot of people that moved here in the fifties were Polish and or Hispanic. A large portion of our seniors are comprised of these two cultures,” says Ritter.

The village’s business leaders recognized about fifteen years ago that children left without adult supervision outside of school hours can get into trouble and established a much-needed after-school program which has grown to become one of the largest Boys & Girls Club in the state of Illinois. The Boys & Girls Clubs of Dundee Township now serves two school districts at eight locations.

“Every elementary school has hundreds of kids that stay after school every night until about 5 p.m. It’s a super active club with a gigantic program at a grassroots level that helps the kids. School districts tell us that the kids come better prepared. A big part of the Boys & Girls Club is Hispanic. It’s another reason as to why they come here,” says Ed.

The community’s largest employer is Otto Engineering which was founded in 1961 by Jack Roeser. The builder of military grade electronic control and communication switches is a great community partner now run by Jack’s son Tom.

With his other company, Homes by OTTO, Tom Roeser has been buying and renovating foreclosed homes in what have been traditionally working class neighborhoods. Homes by OTTO then rents or sells the completely refurbished homes to Otto Engineering employees and their friends or family – as well as other pre-screened tenants – at below market rates, while making a profit. The rehabilitated neighborhoods not only look better, but they have less crime and allow people to become homeowners. The Roesers have done the same for riverfront industrial buildings and infrastructure, creating attractive office and retail spaces, restaurants and parks.

Carpentersville has three main retail areas. One is the Meadowdale Shopping Center on Route 25. The second is on Route 31 and contains the Spring Hill Mall, and Randall Road is the newest. There is also a business park which contains manufacturing and warehousing: the Spring Hill Center for Commerce and Industry. In January of 2016, the village created two new tax increment financing districts to attract additional business and investment.

On June 22, there was a ribbon-cutting ceremony for the opening of a Walmart Supercenter, the largest project in Carpentersville in the past few decades. It is a $30 million, 183,000-square-foot project on a portion of the original Meadowdale Shopping Center site. Since its opening, interest for retail opportunities has increased in the remaining outlots still available.

Carpentersville has everything from high technology to basic services. Fabricators, tool and die companies, food processors, injection molding and more are all found here. In the retail area, the village has quite a few banks and large retailers.

“We also have a large chemical factory that produces paint resins. It has been repurchased a couple of times, and each time, additions were made. It has been a good source for higher level workers,” says Ritter.

When it comes to business retention, it has been a goal of the village board to develop long-term partnerships with the business community. “We believe that retaining business is just as important as recruiting new business. President Ritter and I have been doing a lot of the retention visits where we meet with our companies, one on one. We started the first round with our manufacturing businesses,” says Patrick. He explains that the goal is to discuss Carpentersville’s current business climate, so the successes of its companies need to be recognized along with any issues that can be addressed.

Workforce is an issue everywhere and is a frequent topic during the retention visits, especially at manufacturing companies. The goal is to find employees with skill sets and find the proper training for current employees to upgrade skills by connecting businesses to available workforce resources.

“Our school district – District 300 – has a really great program – the Pathway Programs – for their students. They can get specialized training with different concentrations, one of which is in advanced manufacturing. District 300 also works with the local community college, Elgin Community College (ECC), to offer dual credit opportunities through ECC’s Tech Prep Dual Credit classes,” says Patrick. The Pathway Programs give students skills and real word experience with courses in eleven career fields.

The village has been working with Chicago Area Mountain Bikers (CAMBr) to develop the Keith Andres Memorial Park. The twenty-five-acre bike park dedicated to off road cycling for new and experienced riders with trails suited to multiple skill levels. The park will eventually be connected to the Fox River Bike Trail. There are also hundreds of acres of county and township parks that are all either in or surrounding the village.

Carpenter Park is in the Old Town area near the Fox River, and during the summer, many events – such as Rock the Fox Music Fest, in August – take place here. This year, a Civil War re-enactment will happen in the park in partnership with Stanford’s Battery of Illinois. Also, new this year is Slide the City, in which the streets are turned into a water slide and party.

It has taken much hard work to make Carpentersville the place it is today. When Ed first became involved on the village board, about ten years ago, the village’s infrastructure was in dire straits. Ninety percent of its streets were listed as fair to poor. Since then, ninety percent are rated between good and excellent, and the roads have been completely redone. All roads are now on a regular maintenance schedule.

“Every summer, the village board has a major meeting. Goals are set for one, three, five and even ten years. We have one section of town where the streets need tending to. The underground is dilapidated in the old town section. We have a ten-year plan for this.”

Performance metrics are used. The village determines what needs to be done and must meet that target. Transparent communication lets residents know exactly what is going to happen.

“It’s a key for us right now and has made a difference. We agree on things, and there is no fighting when it’s time to spend money. We tell the public that we have to spend money on something, and we want you to know it’s coming. We will not surprise you with it.” 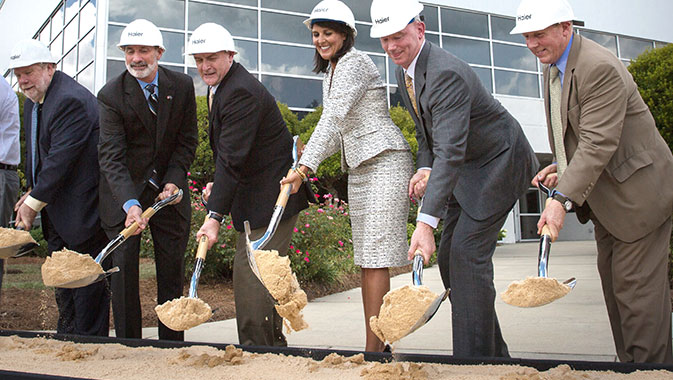