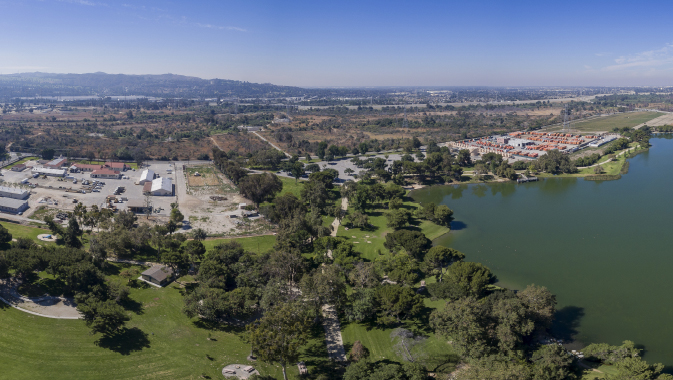 Removed from the hustle and bustle of nearby Los Angeles sits the City of El Monte, California. Located in the San Gabriel Valley, El Monte is in a unique position. It is close enough to major business centers for companies relocating or setting up in California – about twelve miles from Los Angeles’ downtown core – yet distant enough for families wishing to get away from urban sprawl.
~
El Monte is known as ‘The End of the Santa Fe Trail.’ An integral part of the state’s history, the historical, 780-mile-long overland route was used mainly for trade and stretched from western Missouri to Santa Fe, in what is now New Mexico.

Today, El Monte attracts a range of diversified business interests, much of it generated under the leadership of the city manager’s office. El Monte’s Economic Development Director Minh Thai has worked with the city since 2000 in what was then called the Community Development Department. Thai has been a resident of the San Gabriel Valley for over a quarter of a century, holds a Bachelor Of Science in Urban and Regional Planning and has a wealth of experience in environmental assessment, transportation planning and community planning, design and development. As the city’s economic development director since 2014, Thai’s responsibilities include meeting with developers, community members, interested businesses wishing to relocate or locate to the area and existing companies seeking to expand within the city.

“We help people to look for locations within the city,” he says. “We help guide new development proposals to fit within development guidelines of the city, but yet still be able to meet their specific needs. It’s really being a liaison in promoting our community, bringing in new businesses, retaining businesses, as well overall promoting the image of the city as a place to live, work and play.”

“We are a business-friendly city that is pro-development in terms of wanting to ensure the new development that comes in also are consistent and compatible with the goals of the city of maintaining a diversity of businesses of different type of uses within the city and promoting a high quality of life,” says Thai.

Among the reasons businesses choose El Monte to expand or establish a presence, are its location and visibility. Speaking with business leaders and executives over the years, Thai has heard numerous times that El Monte is a tremendous central location to establish a business, relocate and raise families while having access to Los Angeles but without having to live in the city of nearly four million. El Monte has a population of 120,000.

“Here in El Monte, there is high visibility,” comments Thai. “We are in the ring of the city of downtown Los Angeles, and for people who don’t want to do a commute, we provide them with a high visibility location they can access from where they live.”

These commutes even extend beyond roads to the San Gabriel Valley Airport, formerly known as the El Monte Airport – and renamed to reflect its regional role better. It is just 1.6 km north of El Monte and was constructed in 1936 and purchased by Los Angeles County in the late 1960s. The airport employs approximately two hundred people and generates over $40 million in annual economic output. Due to the convenient location of the airport, some executives fly in and out to work and use the facilities for their aeronautics hobbies.

Historically a light industrial business park, the Flair Business Park is in the process of being redirected as the city promotes it as a professional office business park with an emphasis on financial office users. The city says that its proximity to Interstate 10 makes it an ideal location for professional companies seeking visibility. It is also accessible via the El Monte Commuter Shuttle – which also provides connections from the El Monte Metrolink Station to the Civic Center.

“Flair is the only business park that is visible from the freeway between Los Angeles and El Monte,” says Thai. The well-established business park is home to respected companies including Chinese-American financial institution Cathay Bank, East West Bank and banking and financial services giant Wells Fargo’s data processing centre. It also hosts Los Angeles County offices such as the Department of Health Services.

For companies relocating or establishing themselves in El Monte, the city has a stable supply of housing for new residents and is experiencing a high level of interest in new home construction. El Monte has growing residential communities and is one of the few remaining affordable areas within the San Gabriel Valley area.

Recent changes have made a visible impact. “We coin it the El Monte billion-dollar initiative,” comments Thai.

“I have taken a look at all the development interests within the city, and these are major projects from both the private development sector and from the government sector. This includes projects either under construction, projects getting ready to be constructed, recently completed, approved or about to be reviewed for approval. And those projects total approximately $1 billion in investment just within the past several years, and for a city of ten squares miles built-up, that’s a considerable number of dollars invested in new development and business activity.”

While not all properties are yet available, El Monte and its economic development department can show interested parties the many potential sites for development. “My philosophy and thought is that you can’t get to a place if you don’t have a vision. You can’t show people what can be developed, if you can’t tell them where they can potentially do things. So that is what we are trying to do.”

El Monte is working on diversifying its economy and creating different types of skilled labor for a more varied professional workforce. It also wants to continue to attract the financial and healthcare sectors. “From a community perspective, we are trying to attract national credit-type retailers, restaurants and service businesses that can come in and provide much-needed services and outlets for people to shop, eat and entertain.”

The city wants to attract national retailers and is getting a lot of attention and interest in this area. “What we have seen is that these businesses are starting to look at our city and our demographic from a different perspective, and they are really getting the sense that there is a demand here that they can satisfy, not just using the typical criteria to see whether or not they want to locate here.”

To help streamline the process of getting started for businesses new to the area, El Monte offers a comprehensive development process which significantly reduces the amount of time required for entitlement processing, permitting and more. Businesses coming to the city save time and money and are offered confidence, which is a tremendous incentive. When it comes to environmental regulations and approvals, El Monte can secure these ahead of time, paving the way for the environmental review procedure.

The city’s highly flexible hybrid model sees full-time city staff managing contract workers and allows for scaling up or down as necessary – in real time – to change staffing needs. Additionally, El Monte has contractors on board who are highly experienced in areas such as engineering, building, construction planning, entitlement and inspections and are even able to work on weekends if necessary.

“We have a very business-friendly attitude that can help to accommodate the needs of the community,” states Thai. “El Monte is a growing city that is on the move, and we welcome diversity.”