The Holy Grail of Assembly Automation 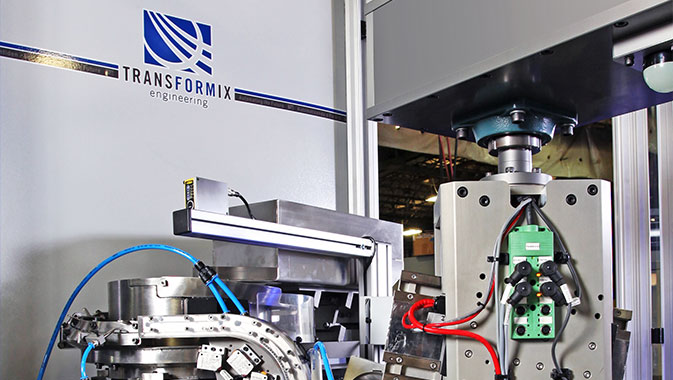 Transformix’s highly flexible, repeatable and precise technology is the first of its kind in the world. The company has developed a disruptive, game-changing technology that allows its clients to achieve productivity and efficiency like never before.
~
Just as the name suggests, Transformix has effectively transformed the way things are done and how products are assembled, using innovation in automation to accomplish what was previously considered impossible. Transformix grew from providing design and fabrication services for traditional automated machines to developing CNCAssembly®, a true game changer for the assembly-automation industry.

“As time went on, the company started to evolve into two markets, one of which is the assembly of small plastic parts, whether they be medical devices or shampoo bottle tops,” explained Jeff Walsh, vice president of sales and business development. “The other division was the automation and the handling of steel tubes and pipes that are used in industrial applications in the nuclear fuel and oil and gas industries.”

In 2009, an opportunity with a major European agrochemical firm would unknowingly serve as the catalyst for Transformix’s significant growth. The company was contracted to change the way sugar cane was planted and fertilized. This project would require extensive development and testing and would take it to Brazil for a two year period to see the project through to completion.

“That really changed our focus substantially, because we had to develop new technologies and build machines that could automatically feed in two-metre long stalks of sugar cane, remove the leaves, then find the randomly located seeds or buds along the stalks,” described Walsh. “Our job was to find the buds and remove them – along with about four centimeters of material – without damaging them – not killing the buds – and sending them for further processing.” And it had to do so at a rate of four hundred buds per second.

After two years of development, sixty-seven production machines were designed and manufactured to meet the highly complex needs of the project. Once Transformix was able to satisfy all project goals, the company was on its way to doubling in size and realizing its true potential.

“When that project ended we were left with some pretty unique technology that we developed ourselves. We owned the [intellectual property], so we decided that we would look at the assembly aspects of our other jobs we were working on,” Walsh noted. “We figured that if we could use this technology in a different way, we could apply it to assembling small plastic or metal components at very high rates.”

“We were really changing the rules around how plastic components were assembled and tested.” CNCAssembly® was the result. We’ve developed and applied for a number of patents, and they’ve been approved, and it’s really starting to take off.”

CNCAssembly® is the world’s first truly universal platform that can assemble many products on one machine, doing so with just a fraction of the footprint of traditional assembly machines. The system offers such a high level of flexibility that clients can remove anywhere from half a dozen to a dozen conventional machines and replace them with one compact machine that is far more productive in nature.

The company has applied its innovation and technology to improve processes and internal efficiency, saving time and money for clients from diverse market sectors. The technology has ultimately improved clients’ return on investment and enabled unmatched levels of production.

Though conventional machines are customized, complex marvels in their own right, they take up a great deal of highly valuable floor space in facilities across the world, often sitting idle or underutilized. They are rigid, inflexible and difficult to operate and maintain.

The CNCAssembly® system is a collaboration of multiple technological functions that offer a standardized, compact, speedy and flexible solution for small part assembly with unmatched performance. The majority of the system is made up of standardized building blocks, otherwise referred to as Engines, and only a small portion of the process is application specific. The system is highly flexible with the capacity to assemble many products using one machine with different end effectors, as required, using programmable part handling and assembly motions.

In a world where high-quality standards are expected to coexist with an ever-increasing demand for shorter lead times and faster, more efficient production, Transformix provides the perfect solution. Its CNCAssembly® system offers an unprecedented level of performance, flexibility and standardization for automated assembly.

“What’s really unique about our product – which allows us to give our clients better service and support – is its combination of speed and flexibility. It’s a standardized product, meaning, in our industry, up until this technology came along, every machine was a custom-designed, one-off special-purpose machine,” says Jamie Stufko, engineer.

CNCAssembly® systems are standardized, configurable and multi-purpose, much like CNC machining centers and injection molding presses. Not only do these systems boast the ability to accommodate a range of products at high rates, but it is also done with rapid and cost-effective changeovers between production runs.

The system erases the boundaries between traditional assembly technologies, using the best aspects of each to offer superior performance while minimizing non-value-added waste.

These digital assembly solutions are fully robotic and built exclusively from multi-axis numerical Engines that are themselves robots and have been integrated to form what have been dubbed “n-axis system-level robots”. CNCAssembly® systems transport work-in-process (raw parts or pallets) using a blend of continuous motion and indexed motion techniques.

“What makes all this possible is not so much the hardware,” Walsh noted, “But it’s our software and the way in which we are using it to control proven off-the-shelf technologies in ways that no one’s ever thought of, to the point where it’s patentable.”

“In the past, assembly machines might have an electric motor to make things move, but most of the assembly motions were either pneumatic, cam-based or were mechanically linked to line shafts – all very traditional technologies that have been around for a century,” explained Walsh. “We’re taking all those mechanical motions and replacing them with digital motions, effectively using multiple servo motors that are electronically geared together. If history has taught us anything, it is that you can always bet on digital.”

“The way our technology works,” Walsh explained, “One servo-controlled device might have one very specific task, and it does it very efficiently, and then for a brief moment in time, it will electronically sync up, or gear up with, another servo-controlled device that’s doing another task, and for that brief moment, these two complete an assembly task and move the product on to the next step in the process.”

Standardized products also make service, documentation, and training more consistent and streamlined. “In the past, spare parts, documentation as well as operator and maintenance training were custom for every machine. Now with the CNCAssembly®, these are standard and common.”

Transformix is supported by a team of professionals who are exceptional in their field and whose ideas drive innovation. These employees have served as the driver of success and fuel the desire to chase down new technologies and solutions.

“Innovation is the backbone of our company… over the last two decades we have amassed an impressive track-record of designing inovative solutions from scratch and finding new ways of doing things, and that’s what has enabled us to take the risks that were required to develop this technology,” stated Walsh.

Transformix has no plans to stop now, and efforts are ongoing to develop flexible feeding, new types of standard Engines, and more. The company fully intends to push further the boundaries of what is and is not possible in the assembly world. As the website states: “We will fiercely maintain the passionate spirit and unorthodox thinking responsible for our success.”

The company continues to break into new markets with this technological game-changer. In the future, it hopes that clients will take on the responsibility of servicing and maintaining the CNCAssembly® system by understanding how the system works and employing it in multiple ways to improve output and their return on investment.

Transformix’s drive is to make CNCAssembly® systems akin to molding presses – standardized machines that can be integrated and adapted for specific purposes by end users and system integrators alike. In the meantime, the company is busy satisfying orders and communicating the benefits of this disruptive, yet empowering, technology. As word spreads, its reputation grows and so too do its clients and its orders.

The Path to Paperless

The Holy Grail of Assembly Automation