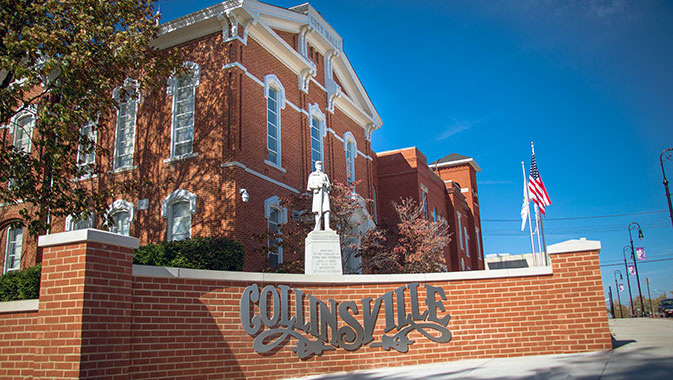 Collinsville, Illinois is a small city (population: 25,579) strategically located in Southwestern Illinois near several Interstate highways. Collinsville boosters are eager to attract new businesses, residents and tourists to a place they say is on an upward trajectory. The city has a thriving uptown, preserved historic buildings, an enviable quality of life, tax breaks for companies and a pro-business attitude.
~
“We are the heart of Southwestern Illinois,” says Leah Joyce, uptown coordinator and interim economic development and tax increment financing (TIF) director for Collinsville. The town is “only nine miles from downtown St. Louis. Collinsville is surrounded by Interstates 55, 70, 255 and 270, which link it to the rest of the country and make it less than an hour’s drive for 2.5 million people. Businesses choose Collinsville for its central location near the St. Louis region.”

“In addition to our prime Midwestern location, Collinsville is home to a well-developed business community. We offer a range of site locations for office, light industrial and retail real estate opportunities. We have Interstate access, a progressive business climate and a ready workforce, second-to-none.”

Through TIF, Collinsville is spending generously on building new infrastructure and preserving old buildings to enhance the city. Since January 1, 2016, it has been part of a statewide enterprise zone as well. These specific areas are designated by the State of Illinois and permit local governments to benefit from several tax incentives and additional programs that are designed to stimulate economic revitalization and growth.

Joyce says that businesses based in the enterprise zone receive such incentives as a 6.6 percent sales tax exemption on building materials for zone-based construction, a one percent investment tax credit on machinery, equipment and buildings and a 0.5 percent investment tax credit for firms that boost their employment in Illinois by one percentage point. Companies in the zone also have access to low interest financing, employment training assistance programs and utility tax exemptions, among other benefits, she states.

Municipal boosters have been working hard to make sure everyone knows about the enterprise zone. “For new businesses, there is information on the economic development page on our website. We also make sure to tell potential developers when we speak to them. For existing businesses, we mailed a personalized letter to each commercial address in the zone telling them about [zone benefits],” says Joyce.

“The enterprise zone is icing on the cake for people who want to do business here,” adds Mitch Bair, director of community development and interim city manager for Collinsville.

The enterprise zone is hardly Collinsville’s only attraction. The city’s TIF program is intended to increase revenues from sales and property taxes, boost property values and improve real estate aesthetics. The program makes money available for fixing “health and safety problems, renovation, rehabilitation and repair to the inside or outside of existing buildings, structures and/or surrounding property. The maximum allowable TIF reimbursement on any given project is $200,000 over a five year period,” explains city of Collinsville information.

The city also runs a CIP (capital improvement program). “Capital project funds are used to account for the construction or acquisition of governmental assets that have a useful life in excess of one year and cost in excess of $5,000. Those assets may include buildings, equipment, infrastructure, etc. The 2016/17 budget includes $12.4 million in capital improvements for the city,” says Joyce.

And the city has reorganized its civic government to increase efficiency. “We had three segmented departments for streets, water and sewers. And, what we did, we eliminated a couple positions, then put all three departments together under a consolidated works department. We also hired a city engineer. We had always used outside consulting firms for city engineers. All of this was done to focus and address infrastructure issues,” explains Bair.

Collinsville officials are currently in the process of building a new $19 million water plant for the city, he adds. It is scheduled for completion in the spring of 2018. The new plant, which will be built on a new site away from the old plant, will be attractively designed so as to fit into the neighborhood and not affect property values. Land around the old plant, meanwhile, will be redeveloped for other purposes.

“In my opinion, the cornerstone of good economic development is real estate opportunities for residential development. We’ve really spent a great deal of effort – and directed funds in the uptown area – towards replacing all of our infrastructure: water, roads, etc. This is really critical because [some of this is] eighty to one hundred year-old infrastructure. So everything’s in place for development to come in … over the last six months, the city has really set the stage to make a substantial investment in our infrastructure. It’s all related to serving our residents. A huge part of that conversation is sending a message to the market that we’re investing in ourselves and that we take care of our infrastructure and not only protect investment in this community but grow it,” says Bair.

Renovations, construction and tax breaks are only part of the story, however. Collinsville also offers a “reputable school system, diverse, affordable housing opportunities and a viable uptown business district” for people thinking of living there, says Joyce.

Plus, the municipal government is very friendly to new business. Asked to cite the single-biggest selling point of Collinsville for businesses, Bair says, “I would say, the relationship you have with the city. It truly is a relationship and a partnership. We are committed to a customer-service perspective and work with you to grow your business according to your vision.”

Which is all good, but what makes Collinsville different from any other small, bustling city in Southern Illinois?

According to Joyce, Collinsville is unique because it preserved a “traditional downtown area. A lot of communities have not made an effort to revitalize their main street … we have a historic preservation commission at city council that really values historic preservation and maintaining the integrity of our historic resources.”

This focus on preservation is a fairly recent development. “Ten years ago, the uptown area, the main street was full of vacant buildings and structures,” recalls Joyce.

The question is, have all these efforts made a difference? Is the city benefitting from these initiatives? By any means, the answer would ‘yes’. In a speech given earlier this year, Kevin Weinacht, chairman of the Economic Development Commission in Collinsville, waxed eloquent about local growth.

“While Collinsville used to be known as a bedroom community, in recent years we’ve become a major player in the metro east market, competing for development with surrounding municipalities,” stated Weinacht. “Roughly seventy new businesses have opened in Collinsville in the last year, from retail stores like Maurice’s Dollar Tree and Code 3 Spices, to grocery stores like Ruler Foods and La Chavinda, to restaurants like D. Boozer’s Uptown and Highway 157 Family Diner on well, Highway 157, and Marco’s Pizza on St. Louis Road. We’ve got new offices, hair salons, contractors, churches, plenty of new home occupations and even a Medical Marijuana Dispensary. In fact, commercial development in Collinsville, this past year, exceeded $14 million, and there’s more in the works, thanks to an impressive incentive program that now includes a regional enterprise zone.”

In addition to new businesses, Collinsville also wants to attract tourists and visitors. “We want people to drive fifteen, twenty, thirty minutes, have dinner in downtown Collinsville and spend their money and shop and be part of this. We’ve really made a lot of effort to make that uptown area a real neighborhood,” says Bair.

City boosters would like to see Collinsville’s population increase, but not by too much. “The real goal for the population for the city is 30,000,” says Bair. He indicates that this population goal will allow the city to remain “true to our tradition, roots and values,” and that this would not be possible as a fifty thousand to one hundred thousand person community.

“At our heart, we are always Middle America. This is a great place to live and raise a family and there are traditional values here,” says Bair. 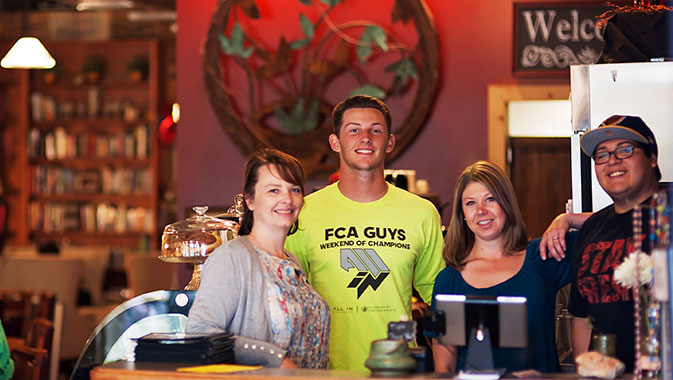