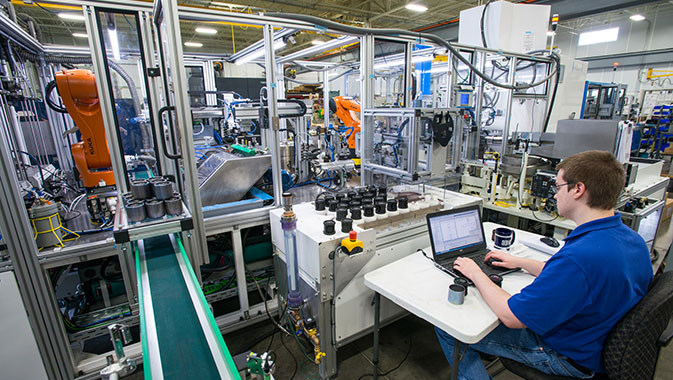 HAHN Automation, Inc.’s motto, “German engineering made in America,” is a reflection of the Hebron, Kentucky-based company’s German roots, international outlook and craftsman’s pride. It is a combination that has proven popular; HAHN is looking at double-digit growth in 2016 and recently opened a branch in Mexico.
~
A full-service systems integrator, HAHN Automation specializes in automated assembly solutions for manufacturing clients. The company can design, build and install everything from simple manual workstations to fully automated assembly and inspection lines.

HAHN Automation is a subsidiary of German firm, HAHN Automation GmbH, which was founded in 1990. In addition to Kentucky, HAHN’s parent company has subsidiaries in Switzerland, Turkey, Croatia, China, Mexico, Germany, the Czech Republic, and the USA. Globally, the company has over 600 employees.

HAHN Automation was launched in the United States in 2000, “with a single employee … now we are up to seventy employees,” says HAHN Automation President John Baines. Baines joined HAHN in late 2004. At the time, he was the eleventh employee.

HAHN’s American subsidiary is primarily focused on the automotive market. “Historically, automotive has represented sixty to ninety percent of our business. Due to strong demand, we’re at the higher end of that range currently,” says Baines. The company also does some work for the military and for clients that make medical devices.

Kentucky was chosen for HAHN’s US operations because of its relatively central location and proximity to major highways and major airports with direct flights to Germany. As a bonus, nearby Cincinnati, Ohio “has a real strong German character to it,” which appeals to expats coming from the parent company to work in the US, explains Baines.

He credits much of the company’s dynamic growth on a decision in 2006 “to establish our own design/build capability in the United States and not just rely on head office in Germany.” This move enhanced HAHN Automation’s US service offerings and improved “responsiveness to the customer,” says Baines.

Last year, HAHN opened a Mexican branch which currently has six employees. “We’ve seen compound growth in Mexico for the last three to four years and decided it was time to provide our customers with stronger local support. The plan is to develop this location into a design/build facility as well as enabling HAHN to serve the Mexico market domestically – at least for certain sized projects and/or technologies. We continue to approach markets with a global perspective and seek to leverage the resources and know-how from all nine HAHN locations worldwide,” says Baines.

Back in Kentucky, plans are afoot to expand the Hebron-based HAHN facility by 21,000 square feet in September of this year.

According to Baines, the company is anticipating twenty percent revenue growth this year. This is down from 2015 when growth hit forty percent. Projected revenues for 2016 are $18 million, up from approximately $15 million to $16 million last year.

While proud of these numbers, Baines says management is wary of growing too fast, too soon. “Our ideal growth is fifteen percent since it enables us to develop our employees at the appropriate pace,” he states.

It is anticipated this rapid, if reasonable, growth will continue into the future. “I fully expect to launch another NAFTA facility by 2020. We will continue our strategy of ‘local for local’ meaning we want to design and build equipment in our customers’ backyards as much as possible. Proximity is powerful in this industry, and customers are beginning to demand it,” says Baines.

The new facility of which he speaks will most likely be built in the United States. By the time the new branch opens, Baines predicts HAHN Automation will have 120 employees in North America. HAHN hopes to add employees at a careful, deliberate rate so as to maintain its strong focus on service.

“We’re a people-driven business… people are the assets. It takes a while for people to get on board. We don’t want to grow too much. This year, we’ve turned down some projects,” states Baines. Manageable growth, in terms of both revenue and staff, will allow HAHN to retain its grassroots touch and emphasis on customer service, he explains.

HAHN’s flagship product is a manufacturing cell system called MasterCell. The system can be set up to run as a single automated workstation with manual load/unload functions or be combined with automated assembly or inspection lines. It boasts a modular design, leading-edge robotics and a control panel. The end-goal is to boost manufacturing production flexibility and volume.

“The MasterCell was introduced ten years ago as a way to provide a flexible solution and a degree of standardization to automation. We’ve improved the MasterCell every year – removing unnecessary costs (both materials and assembly labor) and even automating the engineering portion. It allows designers to focus on the real value-add of the project. We’ll continue to experiment with different upgrades,” says Baines.

So closely is HAHN associated with MasterCell, the public sometimes uses the product name and company name interchangeably, he adds.

While HAHN designs automated solutions, the company is happy to work with outside partners to turn these solutions into practical applications. To this end, HAHN Automation is a system partner with robot manufacturers Kuka, Fanuc and ABB robotics and an integrator for automation components manufacturers Cognex, Mitsubishi and Siemens.

HAHN Automation never lacks for interesting work. “At the moment, we’re working on two very exciting projects: one is for a customer locally that is a military vehicle application. The data traceability requirements are extremely high, and the assembly process is less automated than most but actually more complex. The team purpose also feels different with this project since our ‘customers’ are those on the battlefield, and product failures could put those individuals at great risk.”

“The other project is one where we are coordinating globally with the HAHN group, including all aspects of engineering and even some assembly. The Hebron plant is leading the project. The amount of internal integration is much higher than we’ve ever achieved in the past, and success here would enable us to take on much larger projects in the future,” says Baines.

To describe HAHN Automation’s corporate culture, Baines cites pride of craftsmanship, a dedication to customer service and a cosmopolitan attitude.

“One of our key differentiators is that we are global, and, with that in mind, we need to ensure our culture embraces that. We have employee exchanges annually to get people to see first-hand what life is like at other locations – both in the facility and in the area,” he says.

HAHN Automation is starting to receive kudos from industry associations. The Kentucky Association of Manufacturers (KAM), for example, selected HAHN for its 2015 Manufacturer of the Year award in the small business category. That same year, Baines was nominated by then-Governor Steven Beshear to serve on the Kentucky Workforce Innovation Board as the information technology representative. HAHN Automation is also a founding member of the Northern Kentucky Chapter of the Kentucky Federation for Advanced Manufacturing Education (KY FAME).

Asked to what he attributes such honors to, Baines says, “Personally I think it’s all about what we’ve accomplished and a reflection of the team we have in Hebron. Visitors to our facility leave with a ‘wow’ impression, not just because of our organization level but also due to their interactions with our staff… we have a strong customer base in our backyard, and we want to help them grow successfully.”

He speaks proudly of HAHN being “at the forefront of advanced manufacturing.” As Baines notes, advanced manufacturing components – such as automation – can help counter the challenge posed by offshoring. “Automation has long been the alternative to offshoring. If you look at how Europe has kept manufacturing strong, despite much higher labor costs than in the US, it’s because of automation. My feeling is that US industry has been reluctant to commit the necessary money to automate, preferring instead to work in variable cost structure.”

“As the costs of producing in China have increased sharply and the quality is still hit-or-miss –not to mention the tremendous logistical challenges – we’re seeing these attitudes change. The new hurdle is skilled labor as automation requires a new breed of operator. Here [in Kentucky] we’re working with the state to help strengthen these programs by leveraging our twenty-plus years of apprenticeships in Germany,” says Baines.

When it comes to manufacturing jobs, automation “is often viewed as a job killer. While that is certainly true for low-skill jobs or unsafe jobs” it is not necessarily true for more high-skilled work, he says.

The overall impact of automation might be “fewer but better-paying jobs … our equipment is really what allows manufacturing companies to compete globally despite having such a disadvantage in terms of labor rates and even tax policies,” says Baines. 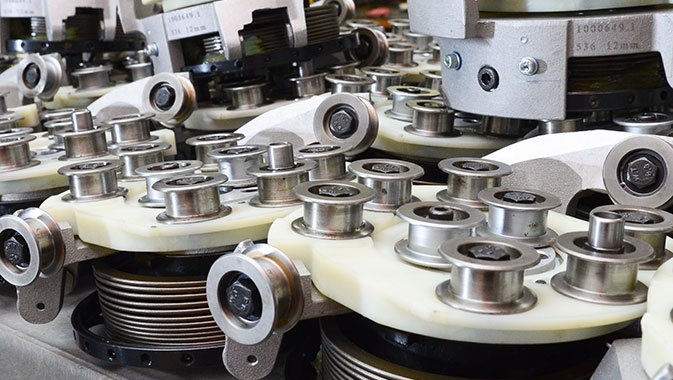 Quality Manufacturing for over 40 Years