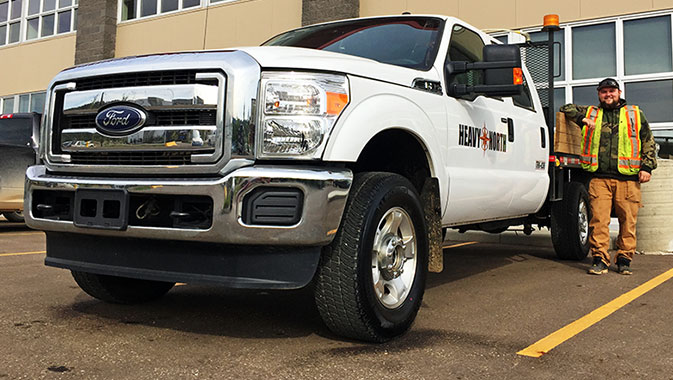 Heavy North was launched in 2013, when a small team of industry insiders poured their skills into a heavy civil construction startup. Based in Fort McMurray, Alberta and focused on the oil and gas sector, the company broke onto the scene with a bang, taking on major oil sands projects right away. And then, the oil slump hit.
~
Heavy North is working diligently to overcome the shakeup. Armed with the founders’ 50 years of combined experience, the new company is adapting to the times, enacting new strategies and shifting direction to stay on top.

Business in Focus sat down with President Steve Bolen and Chief Financial Officer Tom Wilson to catch up on the news since Heavy North was featured last year, and to learn firsthand how the company is overcoming the downturn.

State of the industry
“The market has really tightened up in Alberta as a whole,” Mr. Bolen reports. “We are really feeling it here. A lot of the projects have been deferred or cancelled.” As a result, many companies have been forced to go farther afield to bid work. “There is now lots of competition going after the same work. Companies who were never in this region before have now come [here] from southern Alberta, Saskatchewan, even British Columbia bidding work in our sandbox. Prior to the current economic downtown, these companies would not have considered branching out into this region … In the past there might have been only three bidders on a particular project, now there could be anywhere from ten to thirty.”

The work that is still going forward tends to be for local governments or for private sector projects that are already in motion. “There are still projects up here,” Mr. Bolen says. “The municipalities are spending money. The oil companies are still doing some work, particularly on the maintenance side. But the number of projects and the capital spending has definitely been reduced drastically.”

Mr. Bolen predicts that the downturn currently being felt in Alberta will produce a ripple effect throughout the entire nation. “We are definitely feeling the pinch here. But it is spreading across the country. People are naive if they think we are only going to feel the pinch here in the west. [Alberta’s oil industry] has a lot of employees that come out of eastern Canada who have been laid off and sent home without a paycheque.”

Heavy Norwest
Surviving a challenging market requires flexibility. “We have had to adapt quite a bit,” Mr. Bolen remarks. “You have to think outside of the box. You have to be innovative. You have to go outside of your comfort zone and pursue other opportunities.”

The company’s most significant adaptation has been to launch an exciting new partnership. “Part of trying to survive in these downturns is broadening your markets and giving your clients a better option,” Mr. Wilson explains. “And that is really what we have done with Heavy Norwest.”

Heavy Norwest Ltd. combines the engineering and design talents of Norwest Corporation with Heavy North’s construction expertise to create an EPC construction firm. “We now have the ability to not only design something for the clients but build it as well,” Mr. Wilson points out. “It really reduces any overlap or any headaches that are typically [felt] in construction when we have a designer that is a subcontractor. We have now combined the companies to offer a full in-house service.”

Norwest Corporation has delivered consulting expertise to the energy, mining, and natural resources industries for 30 years. “They provided significant engineering support to the oil and mining industries, not just in Alberta but throughout North America and other parts of the world,” says Mr. Bolen. The company delivers a variety of services through an expert team of engineers, hydrologists, geologists, environmental specialists and management consultants. Clients include energy and mining companies, electric power producers, financial institutions, governments, legal firms, and regulatory agencies. The employee owned global leader boasts offices in Alberta, British Columbia, Saskatchewan, Utah, Colorado and West Virginia. 

Heavy North And Norwest Corporation just joined forces last month in the 50/50 venture. “The goal of this entity is to pursue design build EPC projects, but at a smaller scale than what the [larger global engineering firms] were doing in the past,” Mr. Bolen explains. Traditionally, the Engineering, Procurement, and Construction model has primarily been applied to industry’s larger scale projects. “When you get into the several hundred million dollar, or billion dollar projects, that [EPC model] was somewhat the norm because those clients did not have the infrastructure in place to manage these megaprojects on their own.”

Heavy Norwest is breaking out of the mould and offering EPC services to more modest projects. “We are really taking that EPC model and driving that model down to the smaller sized projects so that we can offer our clients a one stop shopping approach which includes both design and construction services,” Mr. Bolen says. The innovative approach is born out of necessity. “We want to drive this model down to smaller scaled projects to give the clients the benefit of EPC to project sizes that have and will become more the norm than the larger mega projects we have seen in the past.” Heavy Norwest’s target project size will be in the $100 million and under range.

Combining the capabilities of Heavy North and Norwest Corporation will enable the team to keep costs lower particularly as it relates to overhead and stay ahead in a challenging market. “We can be more competitive because we are one,” Mr. Bolen points out. “We are not putting a markup on a subcontractor’s bid and then passing that through to the client. We are able to keep our costs much lower by having our engineering and construction in house.” The partnership is just launching, but the results already look promising. “We have tested the waters and so far the feedback has been very encouraging.”

Moving forward
The team plans to continue thinking outside of the box to overcome the downturn. One significant change will be to venture outside of the oil and gas sector, which has always been one of the company’s primary focuses. “We are currently bidding work in Saskatchewan outside of the oil and gas arena and we are going to be doing the same in British Columbia,” says Mr. Bolen. “We are diversifying outside of our comfort zone. With Norwest currently maintaining office space in Saskatoon, Calgary and Vancouver, we intend on combining space in these three cities in addition to our current space in Fort McMurray.” This will allow Heavy Norwest to leverage off an obvious location advantage that most newer companies don’t have right out of the gate.

Heavy North will also continue working with its traditional client base within the oil and gas sector. “We’ve got return projects with clients that we have worked with in the past, which is a good sign. If we are getting called back, that means we must be doing something right.”

As the company moves forward, the team believes that keeping a close eye on costs will be essential to surviving the slump. “The key is to really know what your true costs are, where you can cut costs and where you can save money as much as you can,” Mr. Wilson explains. “We have done a corporate overhead reduction strategy and gone through everything from turnaround schedules, to travel costs, to staff labour. This is imperative to success in order to really try and understand where our costs are and where we have an opportunity to reduce some of our costs to pass some of those savings on to our clients and get more work.”

The team expects that the industry will continue to feel the pressure for some time, and that companies will need to plan accordingly. “I think the fittest will survive,” Mr. Wilson says. “It is definitely difficult times out there, but if you develop a solid reputation and provide your clients with the best value, it seems to work out well.”

Mr. Bolen believes that government policy will play a critical role in when – and how much – the market recovers. “The outcome of our downturn is in the hands of our governments and what they do with pipelines,” he says. “We’ve got to get these pipelines pushed through. We understand that there are potential environmental impacts, but if we don’t build the pipelines the oil is still going to get shipped above ground by rail or on our highways – and as we have seen in the past, that is not the best solution.” To back up his point, Mr. Bolen cites the Lac-Mégantic rail disaster, which killed nearly 50 people in 2013 when a train carrying crude oil derailed and exploded.

Mr. Bolen goes on to point out that a significant amount of Canada’s oil is coming from overseas suppliers when it could be supplied domestically, creating an economic boost for Alberta’s struggling industry. “Our dependency on oil is not going away. We are importing oil from Saudi Arabia and Africa to feed the east when we have all this oil here. We also have refining capacity in New Brunswick and Quebec that we could be taking advantage of. But instead we are still importing oil on both coasts. We have it here but it is landlocked and can’t get to market.”

Mr. Bolen points out that, in the future, our dependency on oil will change as fossil fuels are replaced with renewable energy. “But that is not going to happen overnight. We need time to adapt and for technology to catch up. As long as we continue to import oil while we have that resource here and it is needed, we have an issue.”

There is no denying that the oil slump is creating serious challenges for companies like Heavy North that were launched to take advantage of Alberta’s oil boom. “We really don’t know how long we are going to be in this storm,” Mr. Bolen admits. But, the team remains optimistic. “You have to maintain a positive outlook,” Mr. Wilson says. “These are definitely challenging times, but we are making it through. We are building on our relationships and our reputation. We are managing our costs.” Armed with the new Heavy Norwest partnership, and an ongoing willingness to adapt to the times, Heavy North is well prepared to weather the storm successfully. 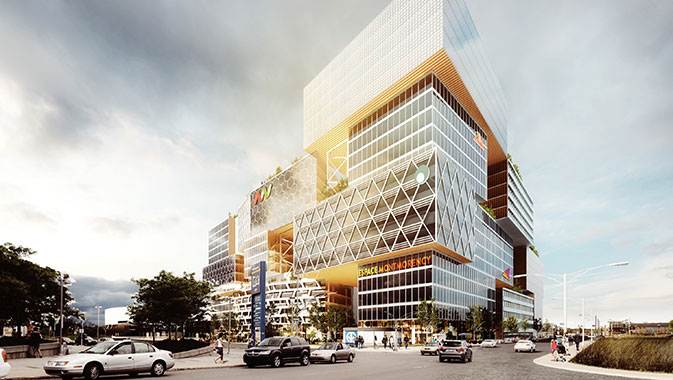 The Art of Building