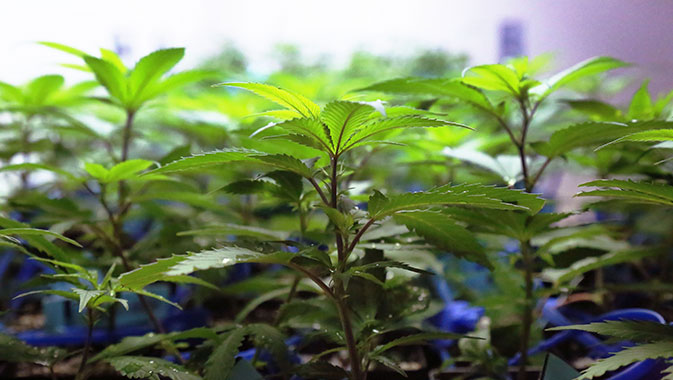 Colorado Amendment 64 allows recreational marijuana use for adults over twenty-one and the legal cultivation, manufacture and sale of cannabis products. Embracing the new legislation are innovative businesses like Euflora Cannabis Dispensary, which offers a vast array of products and staff who provide comprehensive information. We spoke with its owner, Jamie Perino, to learn more.
~
Medical marijuana was approved in Colorado on November 7, 2000. Many other states have also legalized medical marijuana, but only in the last two years has its recreational use been passed into law in Alaska, Oregon, Washington, Colorado and the District of Columbia.

Jamie Perino worked as national sales manager for various building companies when she was approached by a friend who was looking for an investor for a marijuana business. Jamie’s work had slowed during the recession. She wanted to change direction, and this was an opportunity to do just that.

“My initial plan was just to be a silent investor, not work or have anything to do with it and still continue with the building industry. But, as things started to expand, and Amendment 64 looked like it was going to pass, we spent a lot of time looking for locations that would work for a tourist market.”

In the beginning, Jamie spent countless hours meeting with police and the Downtown Denver Partnership (The non-profit business organization plans, manages and develops in the downtown area.). There were places for rent or lease but, as soon as marijuana was mentioned, doors closed. Eventually, a location owner allowed Jamie and her crew to obtain a lease.

“Once he offered us a lease, that’s when I started working by going door to door to meet the neighbors and hang out by the Downtown Denver Partnership and getting involved with the activities in the area to let people know that we are just entrepreneurs,” she explains.

Jamie quit her job and worked full time as an owner and operator of Euflora Cannabis Dispensary at the 16th Street Mall in Denver Colorado. The business began as a medical dispensary that served customers by appointment only but, in September of 2014, it expanded to sell products for recreational use.

Euflora has the distinction of being the only cannabis dispensary in a mall. The 16th Street Mall is an outdoor pedestrian mall that runs about seventeen blocks with buses to shuttle people along its length. The location of the dispensary here is convenient due to its proximity to the convention centre and hotels.

Although it is in a public area with 2.5 million visitors per year, there were concerns that violence and crime rates might increase, or that people would smoke in the mall area. People who were unfamiliar with the product found themselves afraid despite no readily-available statistics to justify their fears.

Police forces tend not to be opposed to this amendment. Jamie has been told that the police would much prefer to deal with someone who is high, than someone who is drunk.

It should be no surprise that the three main bodies opposed to the legalization of marijuana are the pharmaceutical industry, alcohol and tobacco manufacturers and the prison system. The first two groups fear that this will infringe on sales, and since large parts of the prison system in the U.S. are privatized, fewer prisoners mean less profit.

“If you can’t throw somebody in prison for having an ounce of marijuana, how would they support themselves? If you took all the people out of prison with marijuana charges, the prison would be fairly empty.”

Jamie knew that many people would be coming in from outside the state to take advantage of legal recreational marijuana. As Euflora is very close to the convention centre and hotels that host events throughout the year, Jamie met with the concierges, bell boys, restaurant owners, waitstaff and bartenders and offered them compensation and kickbacks to refer clients to the dispensary. “We would give out little business cards and, when distributed, that person would get a certain percentage back to spend in the store.”

This was necessary as there are not many ways to market this product in Colorado. Advertising cannot happen on TV, in newspapers or to anyone under the age of twenty-one. Hotel magazines work very well because technically you cannot rent a room unless you are at least twenty-one. “We are able to put ourselves in these magazines in the hotels, and we’ve been able to negotiate with some of them to be exclusive, near the front of the hotel lobby or other ways to grab the consumer’s attention right away.”

Eighty percent of business comes from tourists who come from all over the world. In the 16th Street store, a large map of the world is covered with pins to indicate where visitors have come. The majority come from the U.S., but Canada is also well represented.

One major issue facing this new industry has to do with bank policy and federal laws. A couple of banks in Colorado are stepping into the arena, but the acceptance of these businesses is as elusive as the marijuana license itself. The banks perform intensive background checks on all staff. Once approved, the dispensaries have to deal with very high rates that vary from $3,000 to $15,000 per month depending on the amount of cash handled.

“Because it is federally illegal and the banks are insured by the [Federal Deposit Insurance Corporation], that’s where the Catch-22 is. We can’t take credit cards or debit cards. It’s cash only.”

The Euflora Cannabis Dispensary has been called the ‘Apple Store of cannabis’. When a customer enters the store, they receive a scanner, as every product in the store has a bar code on it. The reason is due to the complicated mixture of taxes. There is a ten percent marijuana tax as well as state sales tax and applicable local sales tax. Since this is a cash only business, without this system, people would constantly be going back to the ATM for more money. So this helps to smooth the checkout process.

The main thing leading to the ‘Apple Store’ moniker, though, is that it is unlike any other dispensary. “In our store there are tablets on every table and at each tablet is a jar of marijuana bud. You can smell it and then go to the tablet where it will tell you if it is indica, sativa or hybrid. It will tell you the strain name, its origins, benefits for medical reasons and side effects. Customers can also write reviews. It is very tech-driven as far as what we are trying to achieve.”

Due to the summer tourist influx, the store is pretty busy until October, and then it slows a bit until 420. April 20, or 420 as it is also known, has become a counterculture day to celebrate marijuana use and call for legalization. However, sales for the past year have been consistent. Two stores were recently opened in Aurora, which is more of a suburban neighbourhood. Sales have been increasing there as more people became familiar and comfortable with the concept of using marijuana.

Currently, twenty-eight states have legalized marijuana for medicinal purposes, and more will likely follow in the coming years with approvals for both the recreational and therapeutic realms. Jamie believes that it will take a majority of states giving approval before the federal government follows suit. However, other states are writing marijuana laws that will make it much easier to for companies to deal with bank and Colorado could have planned this aspect better.

“I think other states are seeing that there are some ways around it. They put it in a bill that has to be addressed beforehand; then that should hopefully speed up the process.”

One of Jamie’s biggest concerns is that whenever there is a small negative occurrence with edible cannabis products, there are groups that will immediately seize on the isolated incident as evidence of a larger trend and press for change. Another legitimate fear is that someone could be murdered for the money. Since the banks are prohibited in dealing with this industry like any other business, dispensaries are forced to be strictly cash-based, and security is crucial.

Two years in is probably enough time to gauge whether or not the fears and stereotypes have basis in reality. “Obviously, the world has not come to an end,” she laughs. “Crime and violence have actually gone down, and tax dollars collected from us have gone through the roof! In June of this year, we were actually at the mark that they expected us to be at the end of the year. We doubled the tax dollars. So much tax income was brought in that they had a tax-free holiday in the marijuana industry for one day, as they couldn’t collect tax as we were making too much!”

Colorado is experiencing a job boom, and there are no less than ten cranes in the air right now for new construction of apartments in the Denver metropolitan area. When the recession was in full swing, the warehouse market was weak, but with the growth of medical marijuana, the warehouse space was rapidly put to use again. Presently, it is difficult to find warehouse space in Colorado that is being used for anything other than marijuana.

“It’s that crazy! People are moving here in droves. I heard that, at one point, 10,000 people were moving here every month. In other words, this industry has been a definite boon to the state of Colorado. They will say that tourism is not being drawn by the marijuana industry. From what I can see, even if they are coming for conventions and skiing, they are still partaking in the marijuana industry.” In 2015, Colorado state college tuition applications had increased by forty percent. While the colleges say it was a direct result of marketing campaigns, Jamie believes otherwise.

Bringing CBD to the Mainstream