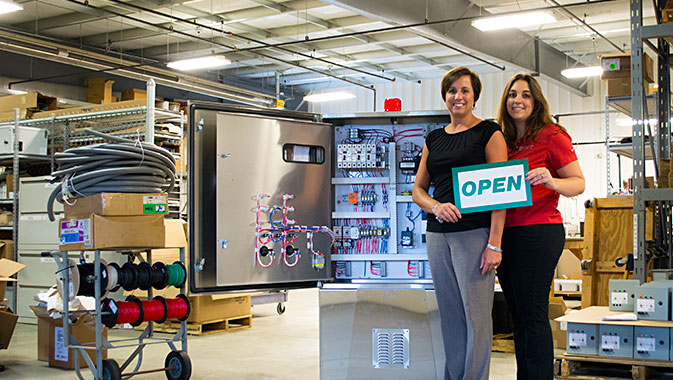 Ashland County, Ohio is one of the leading Micropolitans in the U.S. The city is rich in infrastructure, accessibility and, most importantly, opportunity. Home to an extensive portfolio of industries, economic opportunity in Ashland has grown massively in the last three years.
~
Today, major firms from across the country have sought out Ashland County, finding not only economic success but also local community support. As many areas face an increasingly polarized public support of the private business sector, Ashland provides a remarkable point of difference. Because it finds strength in cooperation, it offers a case study into the benefits of private and public collaboration in aid of business growth.

Ashland County is ranked the Top #6 Micropolitan in the U.S. (Governor’s Cup Award) by Site Selection magazine, indicating that it is one of the best areas in the nation for industrial growth. Its inclusion was based on its performance in such areas as business expansion, retention rates and infrastructure.

Ashland’s foundation in manufacturing is part of the reason it has received so much attention in the last few years. With the resurgence of advanced manufacturing, Ashland has become a prime location in Ohio for expanding companies. The area is well suited to this industry due to its workforce, infrastructure and generous incentives. However, inarguably its biggest selling point for manufacturing firms is location.

Its advantageous position within the state is one of Ashland’s biggest attractions for business development. Located halfway between two major cities, trade and travel routes are abundant. Glen Stewart, City of Ashland Mayor, says, “We are smack dab in the middle of Cleveland and Columbus, which, in Ohio, is the best possible place to be.”

The city sits at an intersection of one of the busiest roadways in Ohio, Interstate 71, which cuts North to South through the state. Additionally, Ashland is only an hour drive from three of the largest airports in the state: Cleveland, Columbus and Akron-Canton.

The city’s local economy has a long tradition of entrepreneurship, and its firm foundation of small-to-medium enterprises (SMEs) has cultivated local business growth for decades. Unlike other centers, the community has embraced SMEs as an essential piece of its long-term economic goals, investing heavily into the longevity of these businesses. As a result, many homegrown companies have matured into major national enterprises, while choosing to keep headquarters in the area that harbored initial success. As these companies have grown in workforce, infrastructure and sales, Ashland’s profile as an industrial leader has risen.

Mike Welch, Ashland County Commissioner, says, “Over the last 14 years as a County Commissioner, I have seen many changes, both good and bad, in the economic climate of the county. However, recently, I have seen a vast improvement in growth with our local manufacturers and an improved retail structure with new national franchises choosing to locate in our community.”

Although manufacturing and distribution remain Ashland’s bread and butter, the county’s economic portfolio is quickly diversifying. Retail and tourism have become active sectors, and, with several new hospitality and plaza developments currently underway, these areas promise only to expand.

Amy Daubenspeck, Ashland Area Convention & Visitors Bureau (CVB) Executive Director, says, “We are very excited to have the Hampton Inn & Suites opening for business in 2016. Without our bed tax partners, the CVB would not exist. These additional rooms will help us grow our efforts to promote the Ashland Area to visitors.”

Like most communities, Ashland County faced some turbulence throughout 2007 and 2008, but, in the last few years, local economic growth has bounced back in a big way. In the years following the peak of global economic downturn, businesses have finally started to pick back up across the nation. Local manufacturers are beginning to invest in the community as they expand and grow their businesses in the form of infrastructure, equipment, and employees.

Barbie Lange, Ashland Area Chamber of Commerce President/CEO, says that, “A strong business community generates jobs for the citizens, philanthropy to support the various organizations, and tax money to pay for necessary infrastructure. The Ashland community is thriving, growing and productive and we are proud to call it home.”

Ashland had a different approach. The city’s current growing business profile is the direct result of this progressive thinking which centers on a commitment to continuous infrastructure investment.

In 2001, Ashland made a critical decision to invest in public infrastructure in the form of land acquisition. Realizing the cost of private property was a serious obstacle for economic development and business attraction, the city bought land with the goal of creating a competitive market for firms looking to expand. The 250-acre property has now been developed into an extensive business park, housing over fifteen businesses. Executive Director, Kathryn Goon, explains, “The vision was and still is to grow the community by encouraging the small to medium size companies to expand and relocate in the Ashland Business Park.” The city does not seek the large, mega companies, but wants to focus on the more realistic advanced manufacturing ones.

Mansfield Plumbing Products in Perrysville, Ohio is a good example of a company that has decided to invest in Ashland County. In 2013, they took on a reshoring project that brought jobs back from overseas. They invested in equipment and increased their labor force to accommodate their growing pottery market.

The amenities in the Ashland Business Park include access to rail and utilities – not to mention a mere four-minute commute to the interstate. These benefits have been distinctly advantageous for companies choosing to relocate. With one hundred sixty acres remaining for development, Ashland’s Business Park is particularly well suited to mid-sized firms from across the industrial spectrum that are in search of national accessibility and an affordable cost of doing business.

There is big business opportunity in Ashland with a small town approach. “Everything here is a community effort,” said Mrs. Goon. In partnership with the private sector, Ashland’s local government has taken on each business development opportunity with personalization and attention to detail.

The economic development team is always looking for ways to create a competitive advantage for the community as a whole. As the business culture and environment changes, so must the mission and vision of the Ashland Area Council for Economic Development. The best way to describe the economic development efforts in Ashland are relationship building, strategy, and focus.

Kathryn Goon says, “If more than one person needs to be brought to the table, we can do that collectively, because we all have economic development in mind, and we all work together. We want the same things for the city and the county, and, because of that, businesses receive the support to the fullest extent.”

Keith Boales, President of the Community Improvement Corporation (CIC) of Ashland, Ohio, agrees. “The CIC and the Ashland Area Economic Development Office work hand-in-hand on projects throughout the entire community,” he says. “It’s our goal to assist the community in economic development in any way possible. Whether it’s in land acquisition or financing options for a manufacturer or local business, we do what it takes to get the deal done.”

Many of the area’s biggest success stories are the result of the strategy. Novatex North America, a prime example, is an international company which wanted to break ground in Ashland but was faced with a challenge. The firm was the result of a large company moving its operations out of the U.S. Seizing the opportunity to continue with a single product line, the new company was able to keep the foundation and labor to operate, but its liquid assets were limited. Representatives from the City of Ashland and the Ashland County Commissioners worked alongside a local construction company and the CIC to create a tailored development plan to give the firm the back-end capability to break new ground. Seven banks, a local construction company, the city and the county, came together to fund the project. Quickly, infrastructure development was in motion with a promise and a handshake.

As a result of new developments, the area estimates that business growth will continue in the next few years. These wins have also led to an upswing in the job market. This employment growth in Ashland promises an abundance of opportunity for laborers across the state, in every sector from retail to manufacturing and even professional services. Ashland is home to Ashland University, and Dr. Carlos Campo, Ashland University President, says that, “For more than 130 years, Ashland University has been the educational and cultural hub for the city of Ashland. From its humble beginnings in 1878, Ashland has been noted for its ‘Accent on the Individual,’ which seeks to educate the whole person in a serene, healthy environment. Ashland University now features nationally recognized scholars programs, an exceptional athletic program, places of worship and award-winning dining facilities. Ranked as a ‘Top 200 University’ with global impact, Ashland University has students calling Ashland ‘home’ decades after graduation. From art galleries to theater events to lecture series and a myriad of community partnerships, Ashland University is a key part of the big time campus feel and small college town experience that defines Ashland.”

A combination of Ashland’s advantageous location and available infrastructure has made it a great place to do business. Ultimately, it is its unique collaborative approach to development which continues to push local business growth one step further. “I spoke to a business owner today who said, ‘I’m in your community because your government works with me, your county works with me, and your city works with me,” shares Kathryn Goon.

When asked what the best kept secret in Ashland County is, Kathryn Goon stated, “Loudonville.” Georgia Kauffman, Executive Director for the Mohican-Loudonville Visitors Bureau, explains, “The Mohican area is located in southern Ashland County. Travel and Tourism is one of the top three industries in the area, with 1 in 15 – or more – jobs tied to travel and tourism. In 2011, the Ohio State Senate named the area as the ‘Canoe Capital of Ohio’. It was in 1961 that Dick Frye opened the first canoe livery in the state. The best kept secrets in the Mohican area are many, but the best one is that the trails never close. Over 100 miles in hiking, mountain biking and horseback riding are open 365 days a year. If planning to stay for a week or weekend, you have a variety of choices from a resort, castle, private cabin rentals, a historic B&B or an Inn; the area has a lot to offer. History, outdoor activities, events, arts and more await the traveler in Mohican.” 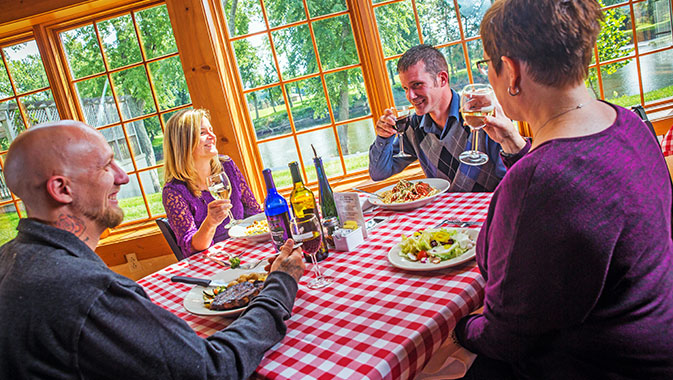