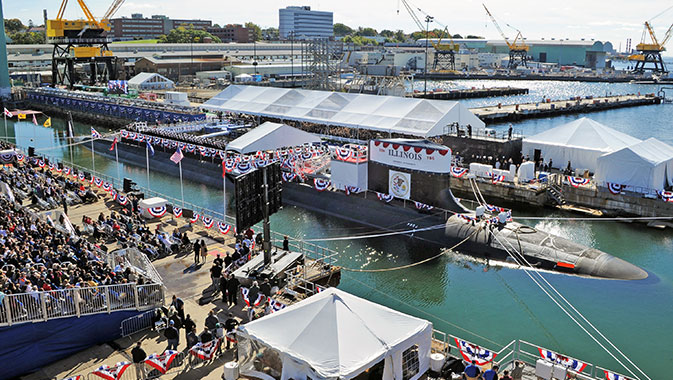 Groton, Connecticut is known for its waterfront charm and business opportunities. This winning combination has made the town of 40,000 an economic success story as well as Connecticut’s number one tourist hotspot.
~
Home to the U.S. Navy Submarine Base and General Dynamics Electric Boat, Groton is grounded in the sea. “It is a waterfront culture and waterfront life,” says Peter Legnos, President of the Groton based business LBI. “Residents enjoy the recreational possibilities that the water affords in addition to the stable economic foundation that marine-related industries bring.”

Location
Groton’s central, seaside location opens up a wealth of possibilities. Surrounded by water on three sides (the Mystic River, Thames River, and the Atlantic Ocean), the community enjoys all the advantages that water access brings, including close proximity to a deep-water port. “We really have the capability of doing quite a bit in the way of freight related shipping,” says Economic Development Specialist Kristin Havrilla Clarke. “In the past year, LBI has moved close to a half million pounds of steel for the Navy,” Mr. Legnos adds. “Having the port available to us is huge.”

Both New York and Boston are under two hours away by train, while Providence, Rhode Island, Hartford, Connecticut, and New Haven, Connecticut are all just an hour’s drive away. Ferries whisk residents to Long Island and Block Island, while commuter trains provide easy access to nearby cities; a total of one million people take advantage of these public transit options each year. I-95 and I-395 both run directly alongside the town and Groton’s New London Airport accommodates both private and commercial air traffic.

Unlike many other towns conveniently located to northeastern urban centers, Groton is not short on land. “We are a community that can grow,” says Mr. Bronk. “In the New England area there are some communities that are boxed in, but we have a significant [amount] of developable land area.”

Industries
Business is booming in Groton. “We are considered to be an economic engine within southeastern Connecticut,” Mr. Bronk remarks. The site of the U.S. Navy Submarine Base, Groton is an international leader in submarine technology, earning the nickname the Submarine Capital of the World. General Dynamics Electric Boat Corporation is another major player in Groton’s marine industry. In business since 1899, the market-leading company is involved in the design, construction and lifecycle support of submarines for the U.S. Navy. The town’s marine cluster includes a significant number of smaller support companies as well, from marine surveyors and salvage experts to marine engineers and marine architects such as LBI, which supplies marine structures to U.S. Naval bases around the world.

Groton has also become a center for biotech. Pfizer maintains a premier research and development campus within the city, creating opportunities not only for the company’s 3,400 employees, but also for scientists employed elsewhere within the biotech cluster that Pfizer’s presence has created.

Brimming with historic attractions and seafaring charm, Groton enjoys a thriving tourist industry. “The Mystic coastal region is the largest draw tourism-wise in the state of Connecticut,” Ms. Clarke reports. Lined with quaint, waterfront shops and restaurants – including Mystic Pizza, made famous in the 1980 movie starring Julia Roberts – historic Mystic is an attraction all on its own. A short drive (or sail) up the Mystic River takes tourists to Mystic Seaport, America’s leading maritime museum, which recreates a bustling 19th century waterfront community, complete with historical buildings and tall ships for tourists to explore.

Mystic Aquarium boasts beluga whales, penguins, sea lions, and stingrays as well as the multimillion-dollar Titanic – 12,450 Feet Below exhibit. The only submarine museum operated by the U.S. Navy, the Submarine Force Museum gives visitors the chance to tour NAUTILUS, the first ship to go to the North Pole, the first nuclear powered vessel in the world, and the first submarine to actually go 20,000 Leagues under the sea. The new Coast Guard Museum will open in 2018 and is expected to draw visitors from around the globe.

Within a short drive
Tourists looking for glitzier entertainment can try their luck at the community’s world-class casinos. “The two casinos were constantly vying to be the world’s largest casino for a while,” Ms. Clarke remembers. “So we’ve got our own little Vegas here.” Mohegan Sun offers more than 5,000 slot machines and over 300 table games in its three casinos, as well as a 1,200 room luxury hotel tower, a 10,000-seat arena, shops, fine dining, a 20,000 square foot spa, a 55-story indoor waterfall and a 3-story crystal mountain. As the largest resort casino in North America, Foxwoods Resort Casino boasts six casinos, AAA Four-Diamond hotels, a variety of restaurants and retail, spas, award-winning golf, and theatres.

Groton’s assets make it a great place to live as well as visit. “People are attracted to our lifestyle and sense of place,” Ms. Clarke remarks. In addition to the popular tourist attractions, residents enjoy extensive mountain bike trails, sprawling parks, beaches, an active senior center, and Shennecossett Golf Course, designed by Donald Ross and named one of the Thrifty 50 by Golf Magazine, designating it as one of the best public courses accessible for under $50.00. Groton’s most popular draw overall is “enjoying that waterfront lifestyle,” says Al Valente, President of Groton Business Association. “We love being near the water.” During the blustery New England winter, residents can choose a range of indoor activities, from beach volleyball to trapeze lessons. “There is an emerging recreation sector,” Ms. Clarke remarks. “It all lends to a great lifestyle here.”

Planning ahead
Groton is focused on maintaining its strong business climate. “We consider ourselves to be proactive in terms of business,” Mr. Bronk remarks. “We are very business friendly at the municipal government level.” Standard & Poor’s agrees. The company gave the town a AA+ bond rating, citing “a strong economy, very strong budget flexibility and budget performance, very strong management, and very strong debt and liability positions,” Mr. Bronk reports.

Groton offers a variety of incentives, “including traditional tax abatement programs and an economic infrastructure program where we can provide direct assistance to new business in the form of grants and loans,” Mr. Bronk details. A new Airport Development Zone creates an ideal environment for new industry. “About 147 acres within a four mile area are ripe for development, much of it either near the airport itself or located right off of exit 88,” Ms. Clarke shares. Zoned for medium to heavy industrial use, the land already has easy access to water, sewer, and gas.

The community is committed to developing a skilled workforce for local industry. “Eastern Connecticut Workforce Investment Board (EWIB) has really been working closely with our major manufacturers to make sure they have the pipeline that they need for the manufacturing and skills jobs,” Ms. Clarke says. Mr. Legnos adds, “Three Rivers, the local community college, has done a great job with their manufacturing training.” Academic opportunities for STEM students include Groton’s marine science magnet school, Rensselaer Polytechnic Institute Groton, and the University of Connecticut, which offers both engineering and marine sciences at its Groton campus.

A recent market analysis reveals that Groton’s “Big 3” – the U.S. Submarine Base, Electric Boat, and Pfizer – provide 60% of the town’s jobs. While this arrangement has created long-term stability, it also means that there is plenty of room for growth in other sectors. “Groton has been very fortunate with some of our larger industries,” Mr. Bronk points out. “However we think that future growth will be on a smaller scale as we move forward. There is still some room to grow in the small to medium size manufacturing, the regional industry clusters with defense, bioscience, maritime, tourism, the innovation arena, and agriculture.” The service sector also has room for growth. Groton is exploring mixed-use development projects, particularly in its downtown, to create new options for the retail and restaurant sectors, as well as to increase housing.

As the community moves forward with new developments, local leaders are committed to maintaining the special charm that defines Groton. “We really believe that we have a special place,” Ms. Clarke reiterates. “There is a sense of place, a high quality of life. We really want to retain our historical [assets]. We want to maximize and protect our unique qualities.”

While Groton treasures its past, the maritime town is still eager to bring in new business. “We think that new investment will be attracted to our lifestyle and sense of place,” says Ms. Clark. “Groton is a great place to live and a great place to do business.” 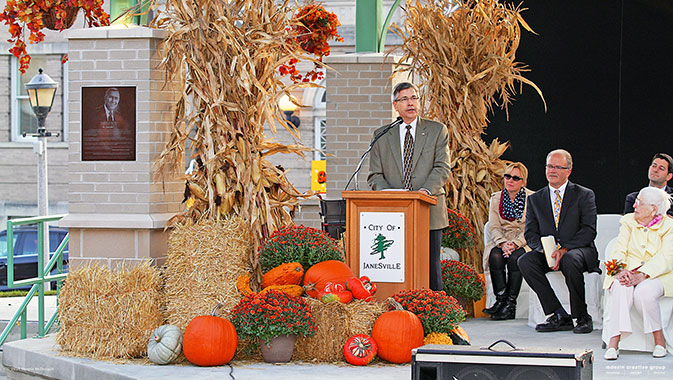 Ready to Go in Rock County