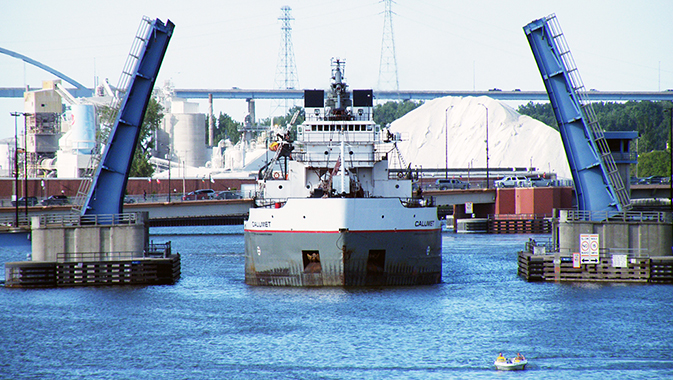 The Port of Green Bay is the westernmost port on Lake Michigan. Its location along the ideal harbors of Brown County, Wisconsin offers the shortest, most direct route to the Midwest while providing a gateway to the Great Lakes and the St. Lawrence Seaway. The port serves as a significant economic driver for both Brown County and the state of Wisconsin.
~
An average of two million tons of commodities, valued at over $300 million, is moved through the Port of Green Bay each year. The port provides state-of-the-art facilities to handle the variety of cargo that passes through every day and helps those goods reach markets across the nation and around the world.

The state of Wisconsin has been designated a Foreign Trade Zone (FTZ), an economic development tool that has substantially contributed to the port’s success. FTZ designation applies to a particular location in the United States in which companies can use special procedures to help encourage domestic, economic and value-added activities to remain competitive with foreign entities.

Within the geographic area of the port of entry into the U.S. that is designated FTZ, delayed or reduced duty payments are allowed on foreign merchandise. The port is the grantee and administrator of FTZ167, which includes the boundary of the whole state of Wisconsin. “We administer the FTZ to try to foster economic development opportunities locally, as well as statewide,” explained Port Director Dean Haen.

The harbors upon which the Port of Green Bay is located have served as a key transportation route since the area was first inhabited. The port has developed from Brown County’s natural assets which have been supplemented by a strong local and regional infrastructure. It has grown over time to support the needs of the evolving local economy, which has developed from being primarily agricultural to industrial manufacturing.

As Haen shared, “The port is located here for a reason. This is where people settled. It is connected by the Great Lakes and the St. Lawrence Seaway, and we are a primary connection point for products moving west from Green Bay.”

The Port of Green Bay is a vital part of the economic functioning and prosperity of northeastern Wisconsin. Currently, the port directly supports over eight hundred jobs, creates $24 million in income and has a regional economic impact of $83 million, which Haen jokes is just behind the economic contributions of the Green Bay Packers.

In the early 1800s, the port facilitated the fur trade while also serving as an ideal location for the positioning of British, French and American military forts along the mouth of the Fox River. In 1816, the first American garrison troops and provisions arrived for Fort Howard.

In 1835, the port’s first shipment of lumber made its way east to build the big cities of Chicago and New York. In the 1860s, the principal commodities being moved through the port were lumber, barrels, shingles, railroad ties and any other wood products from the local lumber industry. This changed in 1871 when the Peshtigo Fire – the deadliest fire in United States history – proved to be a major setback for the industry.

By the late 1890s, the Port of Green Bay was the Great Lakes’ foremost port for moving flour. It also shipped wood pulp and coal at the time. In the early 1900s, the cargo included barley, oats and pulpwood. This changed over time to become predominately coal, limestone, cement, salt, petroleum products, forest products and fuel oil.

In 1956, in anticipation of the upcoming 1959 opening of the St. Lawrence Seaway System, the Brown County Harbor Commission was established. Its goal was to reinforce the economic importance of the port and its vitality to ensure the efficient operation of the port as it moved commodities and goods safely and sustainably.

There are fourteen businesses operating out of the port, which is equipped to handle dry bulk commodities, bulk liquid, breakbulk commodities and oversized cargo. The marine tonnage entering the harbor has annually averaged more than 143 ships and 1.6 million metric tons.

The Brown County Port Department, as an integral part of an active and prosperous northeast Wisconsin economy, facilitates economic growth and success through the planning and actualization of harbor improvement projects including dredging, facility development and dock wall repairs/maintenance for terminal operator. The port works in conjunction with several local, regional and state development agencies to achieve results.

The Port of Green Bay serves as a multimodal distribution center connecting marine shipments to an extensive network of highways and railroads. The port enjoys access to the Austin Straubel International Airport, and a nationally renowned truck line can facilitate overnight delivery within a four-hundred-mile radius of the port.

“We like to tout our carbon footprint. Shipping results in less fuel consumption per ton-mile, which means there are fewer emissions,” Haen explained. He notes that it does not fit all commodity types. “For those that can be moved by water in large allotments, large shiploads of material, it’s a great transportation mode, and we have the capacity to grow.”

Paired with the port’s natural advantages over land-based transportation, sustainability efforts include the Cat Island Restoration Project and the Fox River Cleanup project. The Cat Island Project is a collaborative effort to restore three islands in the lower bay using fine sands that are dredged from the outer harbor navigation channel. The project will produce 272 acres of welcoming habitat for a variety of waterfowl and native wildlife.

“It has really served two purposes,” described Haen of the win-win project. “It maintains the economic vitality of the port by having a place to put clean dredge material for the next 20 to 30 years, and it also has the environmental benefits of creating a habitat.”

The Fox River Cleanup project is an environmental cleanup effort that is expected to continue for the next two years. It has required the efforts of the port to communicate with shippers and terminal operators to coordinate the movement of ships through the dredging and cleanup work so port operations are not impacted.

Shipping will remain a viable option for the transportation of goods in the future, and the Port of Green Bay is ideally positioned to evolve with the local economy. By taking advantage of underutilized properties along the harbor and putting them back into port use, the port will be even better equipped to handle increases in the tonnage being moved as commerce increases. “We are trying to utilize those underdeveloped and underutilized port facilities, put them back into development, and move commerce.

For the first time, the economic impact of the Great Lakes St. Lawrence Seaway System on federal, state and provincial and local economies has been assessed. The study, conducted by Martin Associates, has identified that maritime commerce supported over 225,000 jobs and contributed $14.1 billion in incomes, $33.5 billion in business revenue, $6.4 billion in local purchases and $4.6 billion in tax revenues.

Shipping via the Great Lakes satisfies the needs of local and regional farmers, steel producers, power generators, manufacturers and construction firms. 164million metric tons of goods are shipped through the System each year. Marine shipping can save companies upwards of $3.6 billion per year in transportation costs when compared to land-based alternatives.

“As roads get more congested and the ability to lay additional railroad tracks becomes limited, I believe the future is going to be in water transportation, and we’ll be moving much more as time goes on,” Haen said. He believes that the Port of Green Bay, Brown County and northeast Wisconsin will continue to work together to achieve regional prosperity. 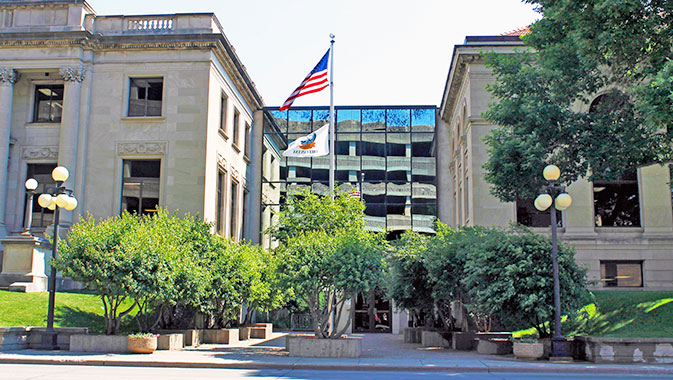 A Region on the Rise