Wisconsin’s Grant County Economic Development Corporation is harnessing its potential with modern industrial parks, financial incentives and a ready workforce. This is a great area to build a business, with access to first rate communication, energy, technology and transportation infrastructure. Add quality schools into the mix, and you make for a highly skilled workforce, while Grant County’s location lends itself well to boundless recreational opportunities.
~
Grant County Economic Development Corporation was formed in 1986 as a non-profit 501C corporation, having spun out of the city of Platteville’s economic development group. Platteville saw that there were opportunities being missed without county-wide economic development.

“The county contributed approximately half the funds, and the member municipalities would go requesting membership dues based on a per capita basis. It’s just under two dollars per capita, which is one of the lowest in Wisconsin,” says Grant County Economic Development Corporation Executive Director Ron Brisbois.

The biggest challenge faced by Grant County has to do with its labor force and finding the right people for the future. The County’s workforce has about 28,000 people, 4,000 of whom go across the river to Dubuque, Iowa to work every day. Grant County, in turn, draws from neighboring counties and the states of Iowa and Illinois.

There are many job openings, though the County’s current unemployment rate is only 4.2 percent. In the nineties through to 2000, however, it was at a mere 2 percent. Brisbois compares Grant County to a county in north central Wisconsin that was in double digit unemployment with 4 percent of that unemployed workforce unemployable.

“They couldn’t really hold any jobs; fortunately in Grant County we don’t have that problem. We will of course never get to 0 percent, but we can still get down pretty low from an unemployment basis. We draw in people from outside the area and can count on schools like SW Tech (Southwest Wisconsin Technical College), which provides us a constant supply of students.”

There is also the University of Wisconsin–Platteville which is known for its strong engineering programs: mechanical, electrical, civil and software engineering. Many businesses from around the country draw from there.

Brisbois explains that unemployment is a difficult statistic to track. When the workforce is surveyed in general, it is found that a lot of people are working jobs and have skill sets that many companies would find attractive if they could find the job in that area. It amounts to a higher number of underemployed, with many people working in jobs which don’t take full advantage of their skill sets – yet they choose to stay due to the high standard of living that the area affords them.

“A lot of it ties back to the boomerang effect. They go off, graduate from college, go off to whatever state, with whatever job. But when they start having a family, they realize that they want to come back. Plus, we have a 98 percent graduation rate in our high schools with next to no dropouts.” The low dropout rate is just one of the aspects of which Grant County is quite proud.

Grant County has eight industrial parks, seven of which are municipally owned and cover 233 acres. A privately-owned park is also currently under construction on U.S. Highway 151 right outside of Dubuque, Iowa. As an incentive, all municipally-owned industrial parks sell the land for one dollar per acre, which is common for southwest Wisconsin since property tax abatements are not possible.

“In Wisconsin, property tax abatements are not legal, so we just buy the land and discount it down. In our case, we do it by buying the industrial parkland and develop it before selling it at one dollar per acre. The infrastructure is all turnkey and shovel ready. We are extremely flexible as we don’t have a lot of the restrictions that a lot of communities in Wisconsin have, let alone the rest of the U.S.”

By mid-October, a Japanese delegation is arriving in Grant County to do some follow up business with the council to set up trade deals to export products from southwest Wisconsin and Grant County to Japan. As far as economic development goes, this will benefit both countries.

Most of the region’s exports to Japan are non-GMO grain and a patented protein powder that is ideally suited as a feed for poultry or swine. This feed additive is a byproduct of the ethanol industry, and is very low fat and low fiber, so it’s easily digestible by one stomach animals. “We are looking to ship that grain product.”

The council is also working with Organic Valley, which is the largest organic cooperative in the U.S. with headquarters just north of Grant County. There are many farmers in Grant County producing organic produce and crops as well as organic beef, pork and milk.

The company in Japan already distributes to 3,500 grocery stores daily. It has the fleet, warehouse and distribution, but there is still space on the trucks, so Organic Valley is looking to take advantage of that by moving its products into Japan, thus broadening its market by using this company as a distribution point.

Brisbois has been working with Japan since 2005 and has been there three times in the past ten years, but he has also worked with companies in France, primarily surrounding food and cheese exports. As well, the county has ties with large Canadian goat cheese manufacturer Woolwich, of Toronto. Woolwich has its only U.S. production facility in Grant County, in Lancaster. The Grant County Economic Development Corporation has also been working to export components for customized farm equipment to England, France and Greece.

The geography in Grant County is unique in the Midwest. This is the Driftless Area and extends from southwestern Wisconsin to northeastern Iowa and northwestern Illinois. The last glacial period did not hit this region, so Grant County has hills and valleys while the surrounding areas were sheared off by the glaciers and are relatively flat.

“The glaciers leveled it out, but here they didn’t hit here, so we have ridges and valleys with indigenous woods. That lends to one of the reasons that people come here, is the scenic beauty. We also have hundreds of miles of trout fishing which is world class. Canoeing, kayaking and tubing companies are setting up shop with scenic cabins out in the woods.” Much tourism revolves round the natural geography of the area.

There are also a number of well-attended events. One of the popular festivals is the Muscoda Morel Mushroom Festival. In May, these mushrooms appear. Morels are sold for $40 per pound down in Madison, but there is a limited window of opportunity for harvest. The community has designated itself as the Morel Mushroom Capital of Wisconsin.

“From a tourism standpoint, I always look at how we can get more people here – people that don’t necessarily live here – and that helps, but there is also the Potosi Brewery which has the National Brewery Museum. They beat out Milwaukee and St. Louis ten years ago for that right.”

Potosi is a village of about seven hundred people, near the Mississippi River. There was a brewery there that operated from 1852 to 1972. In 1999, there was a movement to save the dilapidated, roofless, building. “You could see the sky when you looked up”

The National Brewery Association was looking for a location to house its new museum. Potosi threw its hat in the ring and the museum has been a major draw to the county since. The construction of the museum was an amazing thing for a community of that size. The site also features a restaurant and micro-brewery. The museum is a highlight along the Great River Road which runs up the Mississippi River from New Orleans all the way to Minneapolis.

“They just bought a building next to it and now have a bottling and canning line. They keep growing the business, and, as the beer becomes more popular, they decided to bottle it and can it. From an economic development standpoint, they want to be a contract-for-hire business that can do bottling and canning of beer for other micro-breweries.”

Grant County is very much an advanced agriculture and manufacturing centre. The Grant County EDC is looking at other opportunities utilizing the Mississippi River for trade, developing an inter-modal hub that will have rail for the Burlington Northern/Santa Fe line, along with barge and semi traffic all in one location.

One of the reasons as to why the corporation runs so smoothly is due to the active involvement by the people, elected officials and businesses. Grant County’s is one of the largest counties in Wisconsin, yet it has a population of only 50,000. However, at monthly meetings, it is not uncommon to see upwards of fifty people, and twice that will show up for the annual meeting in December. Counties with larger urban areas often do not get that many participants.

“I like to use football analogies. There are not a lot of spectators here; there are a lot of players, coaches, trainers and mangers, but not spectators. They understand that they have to be involved in order for things to happen,” Brisbois says. “These people that come to our meetings are the spark that make things happen, and that’s why we have such a strong organization.” 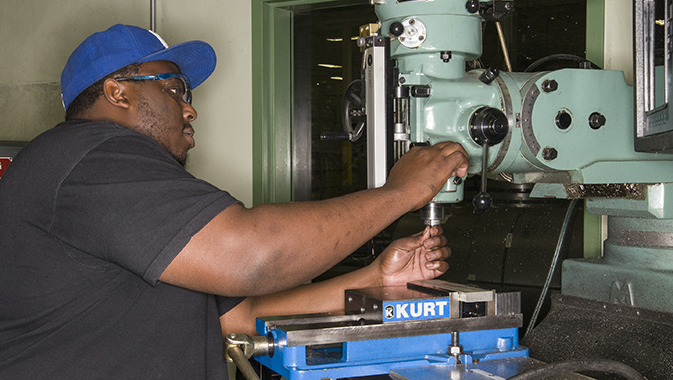