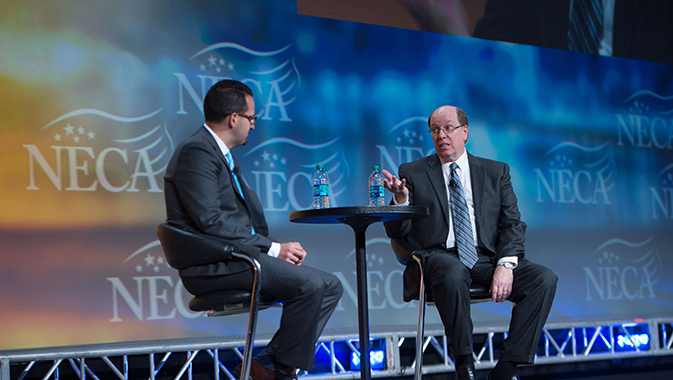 The National Electrical Contractors Association (NECA) is the voice of America’s $130 billion electrical construction industry. A foundational support to the industry, the association drives innovative research, performance standards, and progressive labor relations, as well as providing networking opportunities and workforce recruiting and training.
~
NECA’s history goes all the way back to the birth of modern electricity, when a group of electrical contractors joined forces in 1901 at the Pan-American Exposition in New York in order to strengthen the sector and reform abuses within the brand new industry. Over a century later, NECA continues to build on this legacy and push the industry forward.

With a national office in Bethesda, Maryland, four regional offices, and 119 local chapters spread across the United States, NECA is well placed to support members anywhere in the country. These members include electrical contractors from firms of all sizes, from mom and pop businesses to large multinationals. Every member enjoys the support of a leading trade association and the opportunity to be involved with behind-the-scenes decisions affecting the industry. “By becoming a member you actually help lead those changes,” says NECA CEO John Grau. Of course, members also benefit from NECA’s resources and services, which include everything from newsletters to trade shows.

NECA is always at the forefront of the industry’s most pressing issues, leading the way toward a solution. “One of the biggest issues now has become workforce development,” Mr. Grau reports. “There is a growing shortage of skilled workers in the electrical construction industry.” Part of the problem is that the electrical industry requires highly skilled labor, so workers need years of training. “It takes time. For instance, our apprenticeship program is a five-year program to develop a fully trained electrical worker in the industry.”

The shortage was exacerbated by the recession, which discouraged new talent from joining an industry on the decline. “We didn’t train enough people during those times. It is difficult to train people when there aren’t as many jobs.” Now, the work is back, and the labor is needed. “One of our big challenges right now is to be sure we have that workforce.” In response, NECA has committed a great deal of energy toward recruiting and training the next generation of skilled labor.

The industry is also challenged by the onslaught of new technology. From smart phones to software programs, constantly evolving technology is changing the way business is done – and electrical contractors must learn to utilize it wisely. “So many things are happening,” Mr. Grau remarks. “One of the biggest is the technological advances in construction itself. You have multiple devices now that you use on jobsites, computer virtual [modeling], things that are much more advanced and technological, so contractors have to invest time and money to be able to use this new technology.”

These technological advances within the construction industry are actually changing the way buildings are constructed, which can deeply impact electrical contractors. “The whole building environment is changing. And electrical contractors are right in the middle of that.” Gone are the days when an electrician put in some simple wiring and called it a day; in 2015, an electrical worker must navigate complex, technologically advanced systems. “It used to be that when you built a building you had rooms in it and you might have light fixtures, some plumbing and heating, and a few outlets. Now we have all the requirements for data and for [energy] efficient buildings, lots of different systems for things like light harvesting. So the building has really become a living entity in itself with all the systems in it. Mechanical, electrical, heating, and cooling – they all have to work together as a system and not just independently. And, in many ways, the electrical contractor can be the one who brings that all together.”

Safety remains paramount regardless of shifting technology, so it will always be a core focus for NECA. “Safety is an integral part of the electrical contractors business,” says Michael Johnston, NECA’s Executive Director of Standards and Safety. “As leaders in the electrical industry we have no greater responsibility than the safety of our people. Our people are our greatest asset, so it can only make sense that we have [safety] at the highest level of emphasis.”

The association’s Safety Programs and Safe Workers policy helps to define and promote safety throughout the industry. “At the heart of that policy is the belief of NECA that employers and employees have shared responsibilities with regard to safety,” Mr. Johnston shares. “In other words, contractors have a role and so does the workforce that works for the contractors. That is an underpinning point in our standing policy on safety.”

NECA is hands-on when it comes to America’s safety laws. The association maintains an active presence in the decision-making process surrounding new regulations, ensuring that member interests are well represented. “It is so important that NECA has placed representatives on several key national code making panels and safety regulation development processes so that NECA’s voice at the table is heard,” says Mr. Johnston.

NECA is active across a wide range of policy issues that affect its members. Some of NECA’s advocacy is industry specific, while other efforts work toward a healthy business environment in general. For instance, the association supports H.R. 2050: Middle Class Health Benefits Tax Repeal Act of 2015 and H.R. 879: Ax the Tax on Middle Class Americans’ Health Plans Act, both of which would repeal the 40 percent tax on high-end premium health insurance plans. “Because [many of] our members are small businesses, we look at issues like the healthcare law, or tax issues, or other things impacting small business.”

Another important initiative is to provide members with networking and educational opportunities. To meet this goal, NECA hosts multiple events each year. “Across the board, our meeting attendances have been better than ever,” Mr. Grau reports. “We are getting more and more people attending these events that we put on. I think that it is probably a sign of the economy.” The association’s most important event is the NECA Show, the electrical construction industry’s leading tradeshow. “It is the largest electrical product tradeshow in the country.” Manufacturers introduce new products and members enjoy a range of educational and networking opportunities at the four-day event. This year’s NECA Show is being held in San Francisco October 3rd through 6th.

One of the upcoming trends that members need to be prepared for is the shift from onsite construction to prefabricated construction. “New construction is leaning more toward a manufacturing process,” Mr. Grau explains. “They are looking at how much they can prefabricate offsite in a controlled environment and then bring it out to the site. We see a trend [toward] that whole way of looking at construction.” Benefits include increased efficiency and reduced timelines, as well as cost reduction.

Using prefabricated materials is not new of course, but modern technology is helping the concept gain new ground. “It seems to be growing exponentially. It has always been around in some form, but now contractors are seeing more and more opportunities to do it. Computers are so accurate now that you can design something ahead of time to move to a construction site and it is going to be accurate – the right size, all the correct bends in the pipes – all those kinds of things can be done in advance. That is a real trend that is changing the industry dramatically.”

NECA is ready to help guide members through this – and any other – industry change. After all, the association has been at the leading edge of the industry for decades. A lot has changed since those early days of electric lighting when industry pioneers met at the Pan-American Exposition in 1901. But, no matter how things progress, the electrical construction industry will always need a reliable advocate and support system. NECA plans to keep filling those shoes for yet another century. 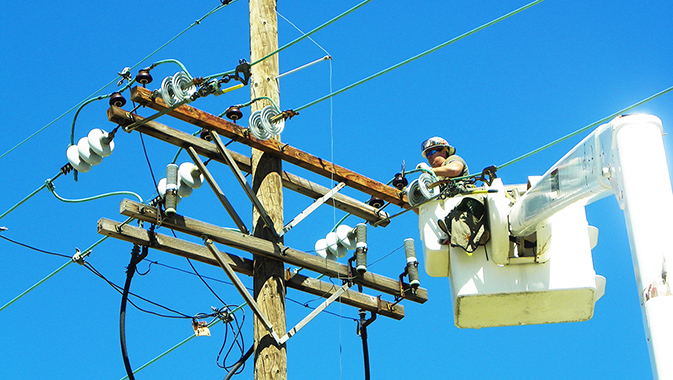