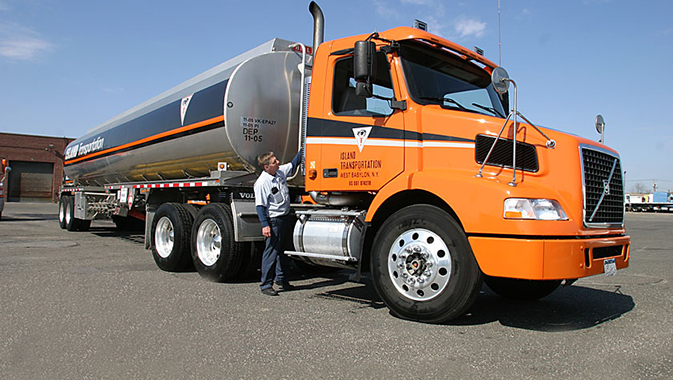 With four terminals, a fleet of 140 tractors, 200 trailers and 350 employees – including more than 250 best-in-class drivers – Island Transportation is fully equipped and ready to handle any bulk petroleum transportation need in the tri-state area. The company proudly transports petroleum for a number of leading oil companies in the northeast United States.
~
Each year, Island Transportation hauls over a billion gallons of product safely and reliably to facilities in New York, New Jersey, and Connecticut, although its geographic reach extends to northwest as Massachusetts, south to Philadelphia, and west to Pennsylvania. The company brings with it a proven reputation for safe, dependable, and high quality bulk transportation services.

The company was established by Peter Fioretti Sr. in 1952 and has grown from the early days of having one customer and two used trucks. Peter Jr. took over the company in 1982 and is the current President. Now, the third generation of the Fioretti family has joined the ranks at Island Transportation to continue the company’s growth and success.

Early in his career, Peter Sr. worked for Puritan Oil during the day, while delivering oil at night under Island Transportation. After three years, he bought out his partners in Island, and began delivering oil in the winter and asphalt in the summers.

Searching for more than seasonal work, in 1962, Peter Sr. started delivering gas for Merit Oil; Merit then recommended him to Amerada Hess Corp when they were seeking a new hauler. This marked the beginning of a significant business relationship, as Hess was responsible for selling Fioretti their NYC fleet at Hess and co-signing the loan that would help solidify Island Transportation’s into gasoline business.

Island gained a commanding edge in the market for its commitment to establishing an internal safety culture and a commitment to operational efficiency. These factors made Island Transportation highly attractive to a number of companies that were interested in its reliable and reputable services.

Growing with market demand, Island Transportation continued to expand its geographic reach, and increase the number of customers as it eventually took over the fleets of several major companies. In 1971, Island expanded its operations into New Jersey with Amoco (now BP) and expanding again in 1973, bringing its operations to Connecticut with Merit Oil.

Island Transportation’s mission is to provide safe, timely, quality service to its customers. It helps clients achieve operational goals through team-oriented hard work and does this with the utmost professionalism. Island has a well-maintained fleet and highly-trained employees. Its drivers bring knowledge and skills behind the wheel with them each and every day.

According to Mike Fioretti, vice president of Island, “We consider safety our license to operate.” Island Transportation is an active partner in keeping worksites, terminals, and the roadways safe. It does this by drawing on its many years of experience with major corporations to develop a comprehensive approach to developing a safety culture. Peter Jr. was the driving force behind this strong safety culture, and today, Mike and his twin brother Brian continue their father’s efforts.

Fioretti credits the work the company did with the major oil companies in the early 1990s as a contributing factor to the development of very high safety and operational standards and driver expectations. “We switched to an hourly pay structure that promoted people doing the job right, taking their time, making sure that they are doing it correctly in the long run, making the company one of the safest in the industry.”

The 1992 change to an hourly pay allowed Island to gain an edge in the market for its commitment to establishing an internal safety culture and a commitment to operational efficiency. These factors made Island Transportation highly attractive to a number of companies that were interested in its reliable and reputable services.

The robust safety program at Island Transportation has three main components which are proper training, discipline, and incentives. The program motivates and empowers employees to play a leading role in the company’s safety and success, by translating the company’s objectives into personal goals. Accidents, spills, and cross drops are avoided in the process.

“That’s kind of what our job is. Every time we send out a driver, we have to make sure we’re giving him all of the proper tools to do his job safely,” explained Fioretti. “We pride ourselves on the safety aspect. Safety and service takes the forefront of the profitability so we are trying to align ourselves with a customer that understands the need to partner with a company like us.”

Island Transportation is continually taking steps to improve its safety and training programs and improving its operational capacities in the process. In addition to its intensive, hands-on driver training, Island has installed Driver cam by LYTX to better monitor driver behavior and ensure good driving habits are maintained.

Good driver safety is reflected each week in pay incentives, a method that has proven to be very effective. Not only is safety incentivized, operations are decentralized, which also contributes to the safe and efficient operations at Island Transportation.

Island has a dedicated training staff at the corporate level. Each one of its four terminals has a safety supervisor who oversees safety on a day-to-day basis. The safety supervisor maintains communication with the drivers and provides a system of accountability on a localized level, serving as a driver resource when needed.

Island Transportation has “more boots on the ground” to stay ahead of the issues related to transportation. The company’s safety and training program enables it to identify drivers it wants to work with and drivers who should not be delivering fuel but rather “ping-pong balls”, Fioretti joked.

Island Transportation is a unionized company and, as such, drivers receive the benefit of competitive wages, vacation, sick days, and medical benefits, in addition to equitable employment standards, and a great work culture. “As a union company, in this day and age, right now, we pretty much offer the best total compensation package for any truck driving job around,” said Fioretti.

Island Transportation is a member of National Tank Truck Carriers, Inc. (NTTC), an organization that represents the tank truck industry before congress and other federal regulatory agencies. NTTC provides members with timely, relevant information; represents the collective interests of the industry; and provides a forum where industry news and information can be shared. “They have been a great aid when we do have issues,” said Fioretti of the company’s membership with NTTC. “With all the regulatory changes the industry is continually facing, we are able to use them as a viable resource and they are able to point us in the right directions.

Moving forward, Island Transportation will continue to address market challenges to remain the bulk carrier of choice for the petrochemical industry. It has identified strategic partners in markets where it can grow alongside the customer. The firm is always looking to expand in the future and will continue to develop its capacities to sustain reliable, safe, and superior quality service, which has served as a catalyst for its growth and the grounds for its reputation.

Island Transportation has come a long way since its humble beginnings and has received a number of awards for its commitment to quality performance and safety from the companies that employ it.

Among the accolades the company has received, it has been a four-time winner of BP’s Carrier of the Year; has received BP’s Award for Excellence and Outstanding Performance; and was chosen as one of Exxon Mobil’s annual Select Ten Carriers.

“Our safety and our service are really the two pillars of what we do and how we have strategically positioned ourselves,” said Fioretti. “We have really maximized our efficiency and safety to compete in the future while delivering our quality service.” Not willing to sacrifice its reputation to get a few more trucks in operation, Island Transportation keeps growing where the market enables, enjoying success along the way. 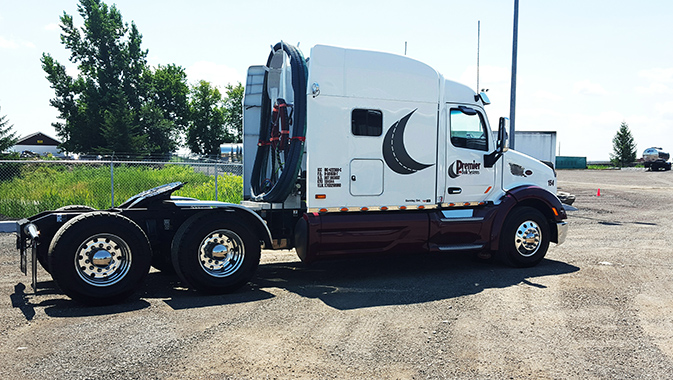 The Experts in Bulk Liquid Transportation