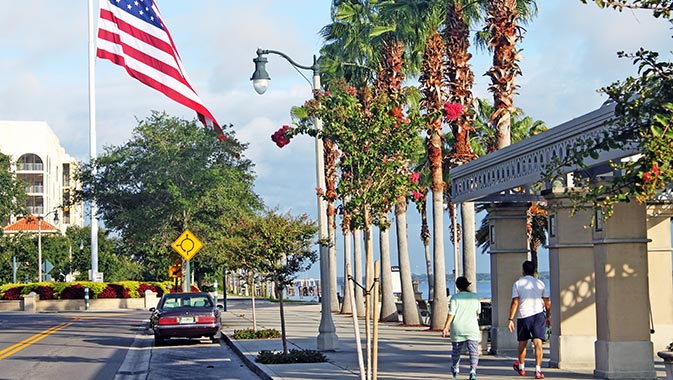 Abraham Lincoln was wisely referring to the process of visioning and planning when he noted, “the best way to predict the future is to create it yourself.”
~
Visioning is a useful technique to determine how we’d like to see the future unfold. It involves conscious decision making – a workable plan where nothing is left to chance.

This same principle can be applied when planning for the vision of future cities. Change is inevitable, and many cities are transforming quickly largely due to technology, demographics, population growth and economics.

Those cities anticipating and planning for the future remain the most successful. Those that want to retain the status quo, are not. By all indications, the leadership of Sanford, Florida is choosing the former.

Created as the county seat of Seminole County in central Florida, Sanford was incorporated as a city in 1877. The city is ideally located bordering on Seminole and Volusia counties and is equidistant from the major cities of Orlando to the south and Dayton Beach to the northeast. With a population of 56,000, the city rests on the southern shore of Lake Monroe at the head of the St. John’s River, which is one of the few rivers in the world that flows north.

Originally named Mellon then Mellonville in the 1800s, it was Lincoln’s Ambassador to Belgium, Henry Sanford, who had a vision for the city, realizing its potential for growth as a transportation hub for central Florida. He wasn’t wrong, and today Sanford continues to grow through strong leadership and diligent planning.

Building a Transportation Network
Transportation infrastructure plays a crucial role in how cities continue to evolve, and Sanford is well positioned for growth with many transportation assets, starting with an excellent highway system such as the 417 GreeneWay, a 4 lane toll road that connects Interstate 4, the east-west corridor that connects Daytona Beach to Tampa, on the north to Interstate 4 south of Orlando. Sanford’s Mayor, Jeff Triplett, notes that additionally, “We’re in the last phase of the construction of the loop to the west—the Wekiva Parkway. The new parkway will connect at I-4 in Sanford and head west before turning south to tie back into I-4 south of Orlando.”

The Port of Sanford, on the St. John’s River, was historically utilized for the shipment of goods. Today the port is used recreationally as a marina and is home to a business incubator with a number of small businesses already in place. The site has half a million square feet of leasable office and warehouse space for business start-ups.

The Orlando Sanford International Airport is strategically located to give Central Floridians access to numerous domestic and international locations. The airport welcomes more than 2 million travelers each year. Orlando Sanford Airport is one of the nation’s fastest growing and one of the world’s top 30 busiest airports, due in part to flight training at Aerosim Flight Academy. Aerosim trains professional, highly qualified pilots to fulfill the needs of the growing airline industry.

Sun Rail, central Florida’s commuter rail system, began operations in 2014, with Sanford having one of the 12 stops. Phase 1 of the line runs 31 miles along the former CSX Railroad. Currently ridership is averaging 3,200 people per day on the system.

The city is also home to the southern terminus of the Amtrak Auto Train. The Auto Train transports motor vehicles, water craft and other recreational vehicles nonstop from Washington, DC area to Sanford. Sanford is becoming a destination for many who visit the Sunshine state.

Positioned for Growth
With six Industrial parks and almost 12,000 acres of zoned industrial and commercial land, Sanford is open to new business ventures. Although most of the parks are occupied, “There’s sufficient availability today for new business. We still have plenty of green space for future building needs,” according to Bob Turk, Sanford’s Economic Development Director.

Sanford has a number of state and county incentives to attract, retain and enable expansion of business. For example, the Seminole County Jobs Growth Incentive (JGI) provides funding for qualified target industries to assist in relocation, permits and other related business costs. Targeted industries include aviation, health care, and technology—including semiconductor defense and solar related businesses. Funding is approved when a business can demonstrate a substantial capital investment and job creation. Mr. Turk believes that the JGI incentive will attract even more businesses to the city and provide excellent opportunities for its downtown.

Additionally, business attraction is fostered by the Qualified Target Industry Program (QTI) Tax Refund, a state program in which the city and county also partner, and is aimed at target industries that encourage quality job growth and contribute significantly to the economic sustainability of the city. To qualify, ten net new fulltime jobs must be created or employment increased by ten percent.

Focused On Business Success
Sanford’s strongest sectors include Healthcare, Aviation, Manufacturing and Education, and all four sectors continue to contribute substantially to Sanford’s growth and sustainability.

City leaders praise the excellent leadership and quality of service provided by Central Florida Regional Hospital. The hospital recently elevated its level of service to a Level II Trauma Center. This designation serves a Trauma Service Area for a five county region.

With the new designation the hospital has added additional trauma surgeons, neurosurgeons and other surgical and non-surgical specialists who are available at a moment’s notice. Along with the excellent physician teams, medical personnel, and state of the art equipment, the facilities are available 24 hours-a-day, seven-days-a-week for immediate or follow-up treatment.

According to Hospital CEO Wendy Brandon, “The Level II Trauma Center at Central Florida Regional Hospital is here to serve the community – providing high quality, local trauma care at the doorstep of Central Florida. Our growth will help the Sanford community and the region continue their growth and development.”

There are other industries making their way into the city’s economic arena, explains Rosemary Hartman from Coldwell Banker Commercial AI Group, who also chairs the Economic Development Committee of the Greater Sanford Regional Chamber of Commerce. According to Hartman, “There are a couple of other areas that are fully in alignment with the rest of what’s going on in central Florida.” She says one is technology. “We already have a renowned technology firm – StackFrame – that’s in downtown Sanford today. They’ve grown from a startup to over 20 employees,” she explains.” One of many technology firms in Sanford, StackFrame is a solutions provider in software development, digital security and information technology. “They’re doing more things in the government sector as well. The city hopes to encourage these industries and to “attract them to either our flex office space or the industrial parks,” she adds.

The spirit of entrepreneurialism is also alive and well in Sanford. In fact, Seminole State College, with a base in Sanford-Lake Mary and 32,000 students, offers an entrepreneurship program, one of the largest in Florida, encouraging students who want to start their own business. The program works with the business community to further develop opportunities for program participants.

The Department of Statistics indicates that major growth in the U.S. will be in companies of 25 or fewer employees. “I think we’re a bit ahead of that curve. We are incubating many new small businesses,” Ms. Hartman says. “They’re growing strong and they’re creating opportunities for people and new job creation.”

Seminole County’s public schools hold the number one ranking among central Florida school districts for quality education; the city is also home to the University of Central Florida at Seminole State. According to City Manager Norton Bonaparte Jr., “We have a school system that listens to our business community and develops programs that are actionable and are creating a work force that meets the needs for business. The people, the culture, and the talent really make it a terrific location for any business that wants to grow and thrive.”

Strong Past With a Vibrant Future
Sanford’s Community Redevelopment Agency (CRA) is actively promoting its historic downtown, rich in antebellum architecture, as an ideal location for business. The CRA has a number of incentives, including rehabilitation and façade grants. The City’s goal is to make the downtown not only a center of vibrant activity and livability but a core of economic success, while still maintaining a sense of history.

The CRA has funded revitalization in the form of street renovations, new sidewalks and landscaping, all in an effort to, “make it an attractive area,” says Mr. Bonaparte. “Then the private sector stepped in to actually make the investment in the buildings and businesses. We see that trend continuing is a very big way.”

Mayor Triplett also indicates that there are three city blocks of prime property overlooking the marina and Lake Monroe ready for a public-private venture, “to develop a multi-use complex which will also encompass our proposed new events center in our downtown core.” He further explains that the City Commission has passed new ordinances and regulations for land use, “[increasing] the density for some of the downtown area.”

One of the major assets in Sanford is its Riverwalk. When completed it will be part of a 23 mile recreational trail system encompassing Lake Monroe. The Riverwalk will also tie into the cross state trail, a 275 mile, $50 million coast to coast connector project, passed by the Florida Legislature in 2013. “We’re working right now with the Florida Department of Transportation, Seminole County and several other partners to go ahead and take the Riverwalk all the way out from the city core to the Interstate 4,” adds Mayor Triplett. Mr. Bonaparte concurs, acknowledging that Sanford, “has what no other city in Seminole County has – Lake Monroe. I see us as the jewel of Seminole County.”

Frank Hale, Executive Director of the Greater Sanford Regional Chamber of Commerce, notes that, “I really see a buzz in this community as a result of the downtown revitalization – people who are looking to invest in the downtown core and residents who are really excited about what is happening. There has been a significant amount of increased traffic as a result of all of that.” He also shares that, “As one of the oldest incorporated cities in central Florida, Sanford is home to brick-lined streets, elegant storefronts and large Victorian homes throughout the downtown area.”

As a resident of Sanford for 15 years and Mayor for five years, Mayor Triplett concludes that, “what Sanford is and what it hopes to become is summed up in its mission statement. We’re dedicated to the delivery of a high standard of service from the city’s standpoint. We are cultivating vibrant business and partnerships, fostering a well-connected, economically thriving community that celebrates its distinctive historical, natural, social and cultural character.” Now there’s a vision, on the grandest scale. 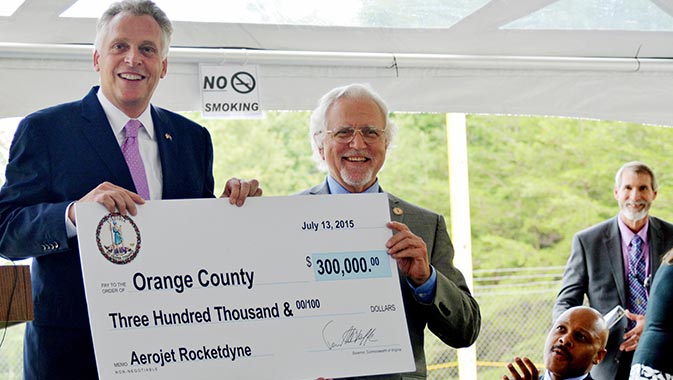