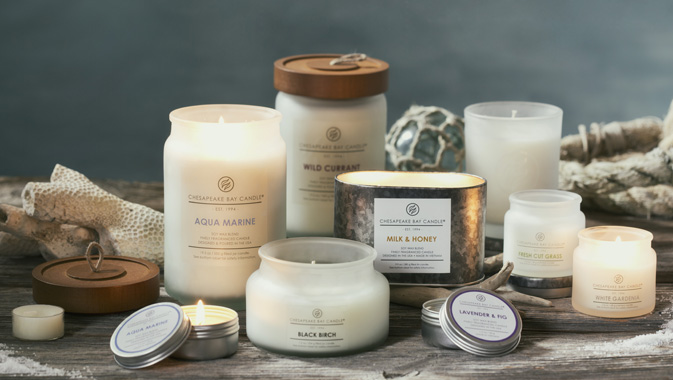 Founded in an Annapolis, Maryland home, Chesapeake Bay Candle has enjoyed remarkable growth over its two decades in business, becoming an industry leader carried by retail giants including Target, Kohl’s, Bed Bath & Beyond and Hallmark. “During the last 20 years, we have produced 300 million candles—enough to light up one for each family on this continent!” says co-founder and CEO Mei Xu.
~
The days when Ms. Xu and co-founder David Wang molded candles by hand in their basement are long gone, but the company’s products have retained their unique, homemade quality and they continue to capture the essence of the pristine Bay waters that inspired the company’s creation.

While the Chesapeake Bay has always been key to the brand, the company’s candles were actually produced in Asia for many years. But, in 2009, after recognizing a shift in the global economy, the team was able to bring operations back to Maryland. The groundbreaking decision was influenced by three key factors. The first was a sharp increase in labor costs throughout Asia. The second was the cost of transporting product across the globe. Third, it simply took too long to get products to market. The seasonal nature of the candle business makes it particularly important to get products on the shelf quickly – especially during the GFC, when cost–conscious retailers insisted on keeping inventory low. Seasonal scents such as pumpkin spice and pine sell best during a six to eight week window each year, but it took six to eight weeks to get those products from Asia to American retailers, so filling last minute orders was almost impossible.

And, to make matters worse, these issues came to a head around the same time that retailers began asking for a price break. “The retail environment was very challenging,” Ms. Xu remembers. “People didn’t have a lot of disposable income and people were not buying things. So big retail partners like Target would come to us and ask for a price reduction, which was very understandable.”

The team weighed the pros and cons and decided it was time to move production out of Asia. They considered Mexico, but “we did not feel the infrastructure and the labor force was ready. And the cost was not that different to produce in Mexico than it was here because of the transportation costs.” Training and security costs also had to be considered. “The labor cost may be less expensive, but the security issue was a very big concern for us.”

After ruling out production options in other countries, the team looked to California, where the company already operated a large distribution center. “But, California is one of the most difficult places to start a manufacturing operation,” Ms. Xu realized. The solution was obvious. It was time for Chesapeake Bay Candle to come home. “Our brand is called Chesapeake Bay Candle. “It doesn’t feel right to make it in Milwaukee or Iowa. It doesn’t feel authentic.”

The move also put production in the same location as the marketing, branding, and design, which had remained in Maryland while the manufacturing was being carried out in Asia. “There was a disconnect between production and our creative synergy,” Ms. Xu reflects. “We felt that by bringing them together we would make wiser decisions and better design. So in the end, we decided to move back to Maryland to be true to our brand. And we feel there is going to be a lot of positive that comes from consumers knowing that it is produced exactly where the Chesapeake Bay is located.”

The company returned to a manufacturing wasteland that is ripe for redevelopment. “In Baltimore… there is a dirty little secret that one out of every five blue collar workers have lost their job and they have not found another one in the last decade. So we have an abundance of abandoned warehouses and skilled, blue collar workers that are not employed.”

The lack of manufacturing presented more than a few regulatory complications, however. “The biggest challenge comes out of the fact that Maryland hasn’t opened a factory in the last two decades,” Ms. Xu explains. “We are the first one [since] probably the 1980s that applied for a manufacturing permit. The county did not have any updated code.” Maryland is known for its red tape and complex fire codes, so the odds were certainly stacked against a candle manufacturer. “Maryland is one of the most demanding [states] for fire safety, and we are a fire hazard, obviously.”

When the team went to the local fire safety officer, he said, “’I’m sorry we don’t have any codes for you,’” Ms. Xu remembers. He handed her a stack of books – each one as thick as a telephone book – that detailed the various requirements for hospitals, restaurants, and nursery schools. “If you can meet all the codes there, you should be fine,” he said. Then he left for a two-week vacation.

Undeterred, Chesapeake Bay Candle hired a team of experts to walk them through the process. Armed with a fire engineer, industrial process engineer, environmental engineer, and general contractor, the company went to the drawing board, spending six months developing a design to submit for approval. Because the team was only improving a building, rather than constructing a new one, they were confident the process would move ahead quickly, so they hired managers and signed a lease. But, a couple of weeks after submitting their plan to the local authorities, the team received a 20-page list detailing additional changes that had to be made. Six more months of production time were lost correcting the problems. In total, it would take nearly two years to get Chesapeake Bay Candle’s Maryland factory up and running.

Fortunately, the wait was worth it. Since opening in 2011, the 120,000 square foot, state of the art factory has “allowed for dramatic leaps in our speed to market and service capabilities.” When the facility opened, 20 employees produced around 100,000 candles each month. Today, after ramping up production capabilities, the facility can churn out over a million candles in a single month. “We are very happy with the increase, and a lot of it has to do with the strategic decision to make things here versus overseas.”

The company’s success is also a boon to the community. Locals are employed in a variety of jobs, from engineering and quality control positions to assembly line operators. While many of the jobs are white collar, a good number are high paying blue-collar positions. Ms. Xu believes that today’s advanced manufacturing could be an excellent source of income for many Americans, but that “manufacturing has a bad rap in this country” that must be overcome first. This negative connotation is based on old manufacturing processes, she points out, not today’s high-tech, next generation factories. “There are technical jobs that they can learn and they can make a great living,” she explains. “Everything is computerized. It is a fully automated system.”

Chesapeake Bay Candle supports American businesses in addition to American workers. The company purchases a variety of items, from glass and fragrance to corrugated cardboard, from small mom and pop operations. By returning manufacturing to the United States, “we helped many companies survive,” Ms. Xu points out. She is hopeful that other manufacturers will follow suit. “I would like to think that we can inspire others who are in the middle of an investment decision to do the same.” An old Buddhist saying summarizes the situation, she says. “‘A candle loses nothing by lighting up another.’ This is wisdom for thousands of years, so I hope that we as a business community can light up another candle, one at a time.” 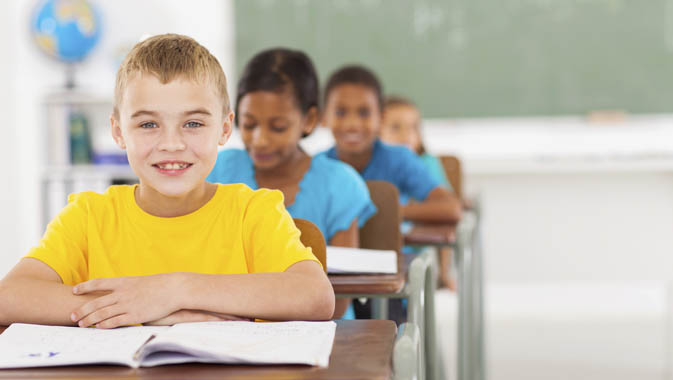 A Different Way to Learn